The oceans are critical to life on this planet in numerous ways and we are stressing them at our peril. In terms of climate change, the world's oceans are providing two tremendous ecological services to us by currently absorbing 30% of all atmospheric CO2 and soaking up 90% of the excess heat being trapped by rising greenhouse gas levels in the atmosphere. However, these services come at a cost to life in the seas and they will not persist at current rates for long. As the oceans' acidity and temperatures rise, their ability to take up both CO2 and heat will decrease. Put another way, the oceans act as a great shock absorber for the Earth's rapid climate change, slowing down what would otherwise be absolutely lethal rates of greenhouse gas-related temperature change. Just like shock absorbers or bumpers on your car though, this function of slowing down the impacts has limits.

There is an excellent article on the dynamics of how this process functions over at Skeptical Science.

You can’t rush the oceans (why CO2 emission rates matter)

As CO2 emissions continue at high rates, it creates a domino effect of ocean chemistry and climate:

All these act in concert to saturate the surface ocean with CO2 and so exacerbate the buildup of CO2 in the atmosphere, accelerating global warming.

Incidentally, if anyone thinks that once we finally get our act together and cut CO2 emissions (either willingly or not) that this problem will quickly resolve itself, think again.

Around 10,000 years or more after emissions cease, the carbonate balance is restored, ending the acidification event as the climate and oceans reach a new steady state when the rate of carbonate added to the oceans by weathering is in balance with the rate of carbonate locked away in sediments and with the CO2 levels of the atmosphere. This makes the ocean carbonate chemistry more favorable for shelly life, even at warmer global temperatures and higher atmospheric CO2 levels.

We are making 'Life' decisions, not just for us and our great, great grandchildren but also for every organism that shares the planet with us. The climate impacts that we are facing are trivial in comparison to what we are imposing on ocean life with growing acidification and warming of the surface waters. Most of us may be ignorant of what goes on across 70% of the planet's surface but that does not change by one iota how very dependent we are upon ocean life and processes.

The marina where I berth my yacht was built on the site of an old acid factory. One would expect the rock retaining walls to covered in mollusks.  They are not. They are covered in slime. However the pontoons that are made of cement have a very healthy growth of bi-valves.

The difference is probably due to the calcium in the cement.

Finally got some rain, mostly west of the mountains (Cascades). Felt like a pineapple express, complete with high winds out of the southwest that took out power here today. With the down time made good progress on a book ("Lights Out", thanks sand_puppy

Fires are mostly east of the mountains. Wenatchee appears to have received some rainfall.  Lots more, please.

Edit: Winds are kicking back up again. We'll see what tomorrow brings.

I spent last week in Spokane, WA., where smoke from the wildfires to the west was so thick at times that the sky was a brownish purple and the sun was an orangish-red.  You could not see the mountains on the horizon, and they were calling the city "Smokane." There were advisories to stay indoors if you could a coupe of days. It was bad. People lost their voices and had watery eyes. I am just now getting over a head cold that the smoke aggravated; the vulnerable with breathing difficulties were at high risk. Here is a photo of what the sky looked like a week ago Wednesday: 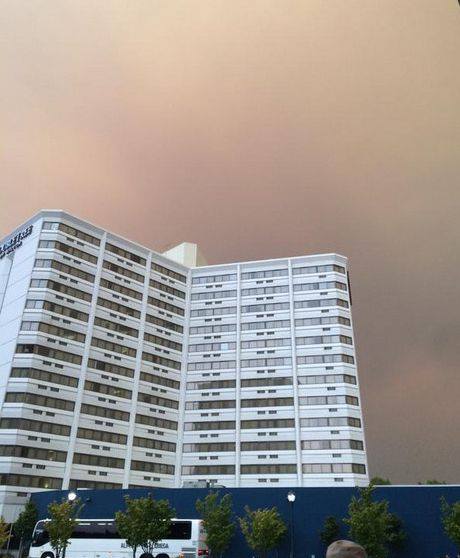 People on the east coast of the USA have no idea how bad things are in the PNW. Just yesterday, a friend in Calgary, Alberta, Canada, told me that the air quality 500 miles away from all this was as bad as in Beijing.

And I understand Federal funds to deal with the emergency are nearly exhausted.

And I understand Federal funds to deal with the emergency are nearly exhausted.

On the bright side, there can always be more federal dollars.

Belowis a statistical model output for this year's annual Arctic sea ice melt (dark blue line). What is interesting is the actual observations (red line). Not a bad model fit this year. Noteworthy is the fact that we are again outside of that gray band which denotes the range within two standard deviations of the mean value (dark line in the center of the gray) between 1979-2010. In plain English, 95% of all years should be in the gray area. Only 2.5% should be below it (the other 2.5% above).

This year isn't as bad as 2012 or 2007 but might beat 2011 for the final low that will come some time in September or early October. That makes 4 of the last 9 years falling at exceptionally low levels outside the gray. The last time that a year had a low ice level above the mean was 2001, when it was only slightly higher. If you are interested, in the 47 years (1979-2015) of annual records, there has never been a single year with values above the gray band.

The North Passage over the top of Russia is open again making oil exploration and shipping viable. Siberian winters just aren't what they used to be I guess. The Northwest Passage over Canada is still opening up but not quite ready for intrepid sailors to transit yet. What is certain is that the Great Arctic Oil Rush is a go for the near future.

FYI, During the last mega-El Nino (97-98), ice levels were kind of ho-hum. Not too low, not high, right around that long-term average line actually.

This year's ice levels would be big news if major lows in Arctic ice cover were not becoming near-annual events. Has climate change reached the 'self-evident stage?

All truth passes through three stages. First, it is ridiculed. Second, it is violently opposed. Third, it is accepted as being self-evident.

Here is a spatial representation of the likely ice cover chance for each location in September.

I suppose that, over 37 years, we wouldn't expect more than one year to be above the 2 sigma line and still have 3 years left for that 2.5% to appear. However, that doesn't seem remotely likely absent some unexpected cooling event. Should I concluded that, yet again, the models are way behind reality?

Sorry about the arithmetic, 37 years makes the situation worse than I outlined. What is happening is that we really no longer have a normal distribution of how the annual ice dynamic is playing out from year to year. If we did, there would be years above and years below the mean with few years being far from the mean. What we have now are frequent years far from the mean and the last 14 all well below the mean. Things are shifting to much lower ice cover and the situation is worse than area measurements make it out to be since we are also losing the thicker multi-year ice. By volume we are down more than 75%. The decay pattern can become very nonlinear at this point. A few good storms at the right time of the summer will fracture the remaining ice pack. Then it will act much the same as crushed ice in your drink and melt more quickly. Barring a major volcanic eruption somewhere near the equator in the next few years that gives us a brief reprieve from the heating and we will likely see an ice-free Arctic ocean for some portion of the summer in the not too distant future…

Right you are, Mark. Indeed, even the distribution of actual observations (as opposed to model runs) doesn't help, since they all now seem to be at the low end of the 2 standard deviations.

I don't know when we'll see a "sea ice free" Arctic but I don't think it will be take many years.

A little mainstream news that I have been connected to of late. These articles resulted from a press conference on the western wildfires that I was asked to participate in as a member of a panel of three professionals. A shout out to T2H for keeping me and all of us so up to date on the situation in the Pacific Northwest.

But is there a connection?

I would say the consensus is “yes.” There’s a growing body of science supporting climate change as a contributor to drought, which contributes to wildfire activity. South Dakota State University Climate Scientist Mark Cochrane has been studying this very thing – this is what he’s found.

Mark Cochrane: “The West in particular has the worst combination going for it.  We have significant rises in temperature.  We have significant drops in relative humidity, which dries out fuels.  We have increases in the number of rain-free days, so even if the amount of rain is the same the number of days where we have no rain is increasing.  And then, not so much on average, but from year to year, we have a higher frequency of high-wind years.  When we have high wind, this is when we can actually make a significant fire into a very large fire. ”

“We are changing fire regimes,” Cochrane added. “We are changing how often things burn now and how intensely,” and the changes will only intensify unless nations slash greenhouse gas pollution.