Thanks to Time2help for the stream of stories. We only get sporadic reports of wildfires in the US, here in New Zealand, so it's easy to think that it's not too bad or is soon contained. But it's not like that. Looks like there is also a long lived extreme heat wave in the middle-east, though I think it has only been tangentially mentioned once on news programmes that I've heard. Over 50°C in Iraq and a heat index of 73°C in Iran. 73°C! I think 55°C could burn the skin, if prolonged. That is just crazy.

So it's hardly surprising that 2015 is shaping up to be the hottest year on record, with the possibility that 2016 would be even warmer. I wonder when it was that three years in a row beat records, though let's not get ahead of ourselves. Still, we've just had the hottest 12 months on record.

And I see the Obama administration granted Shell a license to drill even deeper in the Arctic. This from an administration that apparently sees climate change as the gravest threat. If you believe that, you'll believe anything. New Zealand is just as bad, actively encouraging deep sea oil and gas exploration around it's shores, though our government don't see climate change as much of a threat, so their policies are hardly surprising.

James Hansen is getting very worried about all this and he is perhaps the pre-eminent climate scientist in the world.

The religious role call on the need for action regarding climate change continues with many Muslim clergy speaking out today, following on the Catholic Pope's encyclical on climate change and statements by leaders of many other faiths (link, link). This may be one of the few issues that these diverse groups can agree on at this point. Perhaps the time has finally come for concerted action.

Islamic call on rich countries to end fossil fuel use

Islamic environmental and religious leaders have called on rich countries and oil producing nations to end fossil fuel use by 2050.

The Islamic Climate Declaration says that the world's 1.6bn Muslims have a religious duty to fight climate change.

It urges politicians to agree a new treaty to limit global warming to 2C, "or preferably 1.5 degrees."

The Declaration asks Muslims, in the words of the Koran, "not to strut arrogantly on the Earth".

"People need to be told and politicians need to stop misleading their people, in telling them they can go on increasing their standards of living for ever and ever and ever," Fazlun Khalid, a long time Islamic environmentalist involved in drawing up the Declaration, told BBC News.

"Someone should be articulating this because it's an impossibility, they can't do it – And this applies not just to Muslim countries."

One of the Muslim prophets foresaw (for that is what a prophet does, O best beloved), that buried beneath the ground in Iraq was a mountain of gold, but that they were forbidden to touch it.

I guess he was right. Imagine an Iraq without oil. What would it look like?

Still, I must bend your ear again to the idea that the answer lies not in the soil but buried in the foundations of physics.

Seek. And do not stop looking until you find. When you find you will be perplexed. When perplexed, astounded. And rule over all.

Some other prophet. Guess who.

We calculate that with a physical area less than 10 percent the size of the Sahara Desert, our process could remove enough CO2 to decrease atmospheric levels to those of the pre-industrial revolution within 10 years," he says.
Read more at: http://phys.org/news/2015-08-diamonds-sky-approach-co2-valuable.html#jCp

Lucy in a Sky With Diamonds.

China has been the leading carbon emitting country since somewhere between 2005 and 2007, depending on whose numbers you use. The article below reports on an accounting error that has resulted in over reporting China's 2000-2013 emissions by nearly 3 gigatonnes of carbon.

Confusion over the types of coal being burned in Chinese power stations has caused a significant overestimation of the country's carbon emissions.

But when scientists tested the types of coal actually being burned in China, they found they produced 40% less carbon than had been assumed.

The study says the error amounted to 10% of global emissions in 2013.

The story gets all confused after that point though when it tries to put things in perspective. If you put together the 14 years worth of overcounting that would be roughly 10% of just the 2013 global emissions. Put another way, it means an overstatement of China emissions by the equivalent of ~1% of global emissions per year. It's not a conspiracy it is simply that no one accounted for the fact that China burns way more lignite (brown coal) than anyone else. This low quality coal produces less energy, less carbon emissions, more air pollution and more ash. Poor quality fuel.

Since the global quantities of carbon in the atmosphere are measured directly, this accounting snafu means one or both of two things.

1) One or more countries are emitting more than is currently being estimated.

2) The Earth System is no longer taking up (vegetation and oceans) as much carbon from the atmosphere as it has in the past.

If the issues is #1 then we just have a few more accounting problems. If it is issue #2 then we have a much more serious problem. It would indicate that carbon will continue to pile up in the atmosphere more quickly than we are currently estimating. This could be either from decreased vegetation growth rates, increased vegetation death and decay rates (fires, bug-kill, droughts), or decreased uptake by the oceans (warmer waters, less overturning). This slow down of the rate of uptake has been expected, postulated, but never convincingly shown to date.

Scientists at the National Oceanic and Atmospheric Administration released a report Thursday showing that July was Earth’s hottest month on record. Nine of the 10 hottest months since record keeping began in 1880 have occurred since 2005. Climatologists also expect 2015 to be the hottest year on record. This news comes as scientists from Columbia University’s Lamont-Doherty Earth Observatory released a report that shows that global warming has worsened the California drought, now entering its fourth year. This new study is the first to estimate the extent to which rising temperatures are affecting the loss of moisture from plants and soil, and suggests that within a few decades continually increasing temperatures and resulting moisture losses will push California into a permanent drought by 2060. We discuss the report and the impact of the findings with the study’s lead author, Park Williams, a bioclimatologist at Columbia University’s Lamont-Doherty Earth Observatory.

Thoughts and prayers for three brave men and their families
https://youtu.be/Tcj2-pfcj7w 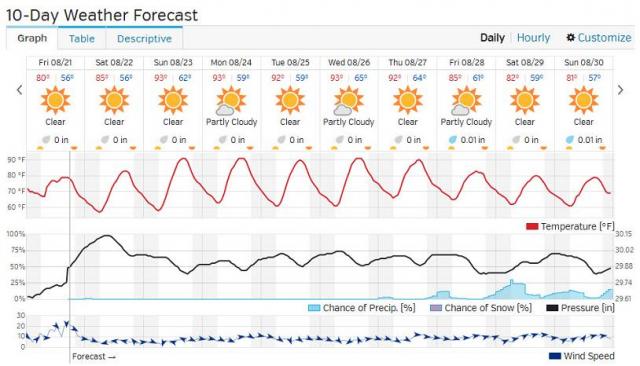 A new study has been published that purports that the US could get all of its energy needs from renewables by 2050, with 80-85% achievable by 2030. And by all, they mean all, including transportation/shipping. The study is a hefty 132 pages but most of that is supplemental materials detailing how the calculations were done. It breaks everything out by state, discusses the economics/jobs, and health impacts. The transport side of things lays out the need to establish the necessary energy delivery infrastructure (e.g. electrolytic hydrogen) over 10-15 years for this to be viable. It is not completely pie-in-the-sky wishing though it would require more political will than we have seen since WWII. Not saying that it can or will be done but this seems to fit with the spirit of good new Friday (alas I am late by a few hours). If the world doesn't blow up on Monday maybe we can hope for such a transition…

I'm a bit less reticent than you. I would say this is completely pie in the sky and that it won't happen, even if only because it would take "more political will than we have seen since WWII". With a substantial portion of the US, and it seems half its politicians, in denial about climate change or its threat, there is no chance this will happen. None.

By the way, the report mentions hydrogen for aviation (and other transportation). Dangerous or what? But it doesn't appear to give any details on how that hydrogen will be produced (other than a single mention of electrolysis) or whether it's feasible. I also couldn't find any mention of rare-earths, for photovoltaics. In fact, it doesn't seem to mention the feasibility of obtaining resources for all of this new infrastructure (e.g. how the cement will be produced). It mentions gas-fired back-up but thinks it may never be needed (well I don't know who will supply natural-gas that may never be sold).

Admittedly, this is just scanning but it doesn't appear to used joined up thinking, not even anything about what happens after 100% of energy use, in the US, is WWS (plus hydrogen) – that is, how a totally renewable energy powered industrial society will continue operating, maintaining and growing itself with just renewable energy.

Of course, if others aren't doing it, there is even less likelihood of the US doing it. If everyone else does it, we'd still be on target for the 6th Extinction Event (since climate change impacts haven't even kicked in yet) and built in climate effects will continue for some considerable time and that may also have an impact on the cost calculations and site suitability.

All in all, pie-in-the-sky. However, maybe my scan wasn't compete enough.