Sorry to be so long away but I've been on the road one way or another for 7 of the last 8 weeks, most recently in Indonesia on the islands of Java and Sumatra. One of the main foci of my research these days is on the climate and land use interactions behind the peat fires that plague the region. Ever since the major El Nino of 1997-98 peat fires in Central Kalimantan (Indonesian Borneo) and Riau and Jambi provinces on Sumatra have become a near annual occurrence with the situation being simply a matter of degree.

The situation is another self-inflicted ecological disaster that is man-made. Peat swamp forests were cleared to grow massive quantities of oil palm, and rice in a madcap clearance of 1,000,000 ha in the case of Kalimantan. The forests sat over several meters of peat that had been laid down over more than 20,000 years. In order to utilize these lands it wasn't sufficient to clear the forests, the lands needed to be drained with thousands of kilometers of canals. Draining tropical peat lands is the equivalent of melting Arctic/boreal permafrost. It turns a sequestered pool of carbon into one that can be actively metabolized by microorganisms and also burned when dry enough. In short, they become another source of carbon emissions to the atmosphere. This is why Indonesia ranks 3rd in global emissions these days.

This is what Riau province looked like last year. 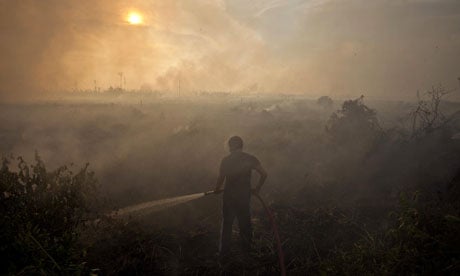 I just came from there, having been out with firefighters like the one shown. While things have calmed down for the moment, there are numerous peat fires currently smoldering across the region, having been burning for more than a month already. Once the fires go to ground in the peat it is nearly impossible to extinguish them. They tend to burn until the heavy rains of the wet season flood the lands. A few years earlier I was doing field work in Kalimantan when similar conditions of extensive burning and massive haze conditions covered the region. When we came out of the field, we were unable to leave the region because all planes were grounded for over a week. We eventually gambled on a long drive to the coast to escape the region instead.

The regional haze is a toxic mix of gases and particulates that cause thousands of illnesses and deaths. They reach beyond Indonesia and bedevil Singapore among other places.

I raise these points because these conditions are at their worst during El Nino events. At the end of the month we will 'officially' meet NOAA's El Nino definition (I believe the Aussies already acknowledge the obvious). All models call for the strongest El Nino since 1997-98, with an 80% chance it will continue until at least the end of spring next year (Northern Hemisphere spring that is!). This is what global precipitation patterns are likely to look like in general for the next three months.

That big red blob of very dry conditions sits right on Indonesia. If I finally exit the two year bureaucratic quagmire I have been in, as now seems likely, I should be leading a field team testing emissions from the peat fires in Kalimantan come mid October. It should be interesting if unhealthy. Lest anyone think that science is nothing but sitting at a desk number crunching, the scientists and equipment I have coming in to do the sampling were most recently in Nepal on another project when the earthquake hit, dropping a building on their equipment but thankfully not them. As for me, during the 1997-98 El Nino I was over in that other dry blob that affects the Amazon standing in the midst of a 1,000 km2 forest fire that happened to burn through my plots while I was in them. Always get the data! Cochrane et al. 1999, Science.

Some of the more interesting articles…

https://youtu.be/m0yc8ULnb_g
And a reminder, have a plan

At least 26 homes destroyed by wildfire near John Day (NWCN)

After looking through several of Time2help's post on West Cost wildfires, I'm wondering if it would make sense to start a weekly news cast on this thread? This would be somewhat similar to what's done in the precious metals group. I think there's enough of material here and very few climate change news stories seem to make it into the daily digests (most that are environmentally related don't seem to have much, if any, to do with climate change).

I don't know if this sort of thing counts as climate but it will be the biggest on record. (Thinks. "So that's where the heat went?")

The southern United States from Florida to central California may expect higher than normal levels of precipitation, as can the US East coast as far north as New England, Halpert said.
The northern Rockies, Great Lakes, Hawaii and western Alaska may be dryer and warmer than normal, he added.
Even though forecasts of rain will be welcome in drought-ravaged California, Halpert said it would not be enough to refill the state's reservoirs.
Read more at: http://phys.org/news/2015-08-el-nino-strongest-modern-history.html#jCp

Recorded history of droughts in a deep cave.

That is an intriguing idea for the thread the only questions being how to do it and who would do it? I'm not sure environmental topics grade into a handful of standard reportable elements like Dave uses in the Precious Metals group. A weekly synthesis of the climate news in general wouldn't be a trivial undertaking. My availability is chaotic at best so it is not the sort of thing I could reliably produce in any case. I'm open to discussing the concept though.

Time2help's posts are more in line with Saxplayer's  informative news posts. They are the sort of posts that any of us could make with relevant climate-related articles to provide more of a one-stop shopping for such materials. One of the strengths of the PP membership is the ability to canvas a remarkable array of news sources for relevant materials. I started this thread to provide information but I gain quite a lot of it from the excellent posts made by many contributors. I often hear about new papers here before I see them elsewhere! Anyone care to dissect this one?

I don't know about dissecting it but if this is primarily due to a shift to cheaper natural gas, it's not something that will last. And it presumably only measures direct emissions from power stations, not from the extraction of the natural gas too. Then there are exported emissions from the export of coal.