My facebook page is on fire with friends who want to "end the gun madness in the USA" with more restrictive laws on gun ownership and other friends who feel that citizen gun ownership is an essential part of defending oneself and family.  It is my impression that the main issue is the visceral issue of whether each friend is individually identifying more with the role of "shooter" vs "shot at."  Those who are committed to non-ownership want others to not be permitted to own guns also.

A reference article from Harvard Journal of Public Law and Policy, 2007 was brought to my attention that offers a scholarly review of this issue.  The paper is 40+ pages long, heavily footnoted and takes a bit of time to read.

A very brief summary of the main points.

1.  Both internationally, and in the USA, there is absolutely no positive correlation between rates of citizen gun ownership and homicide rate.  The belief that "more guns creates more violence" is NOT supported.

2.  In fact, exactly the opposite is demonstrated.  From the US data, there is an inverse correlation between gun ownership and violent crime.  Counties with the highest percentage of legally armed citizens have the lowest homicide and armed robbery rates.  Interviews with prisoners show that fear of being shot by an armed "victim" deterred criminal activity.  In jurisdictions where citizens are disarmed by statute, this fear does not exist and criminal activity is regarded as "safer."

3.  Ordinary citizens are exceedingly unlikely to commit murder in anger against family and friends.  Spousal murder, for example, was overwhelmingly the end result of a long history of domestic assaults.  94% of spousal murders had prior domestic violence police calls to their home with a mean of 5 calls prior to the murder.

4.  Murders and armed robberies were overwhelmingly committed by people with a long history of assaults, multiple arrests and sociopathic behaviors.  Normal law abiding citizens just don't shoot each other, even when angry.

5.  When gun availability is severely restricted by statute, only the worst of the criminal element, needs, and is willing to risk ownership.  Gun possession is then concentrated in the sociopathic social segment. 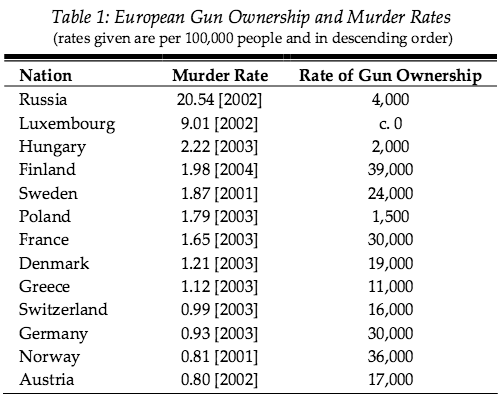 The authors also review historical timeframes (decades and centuries) from the invention of the repeating rifle and revolver and their diffusion into widespread civilian ownership.  This was a period of steadily declining murder rates.

MI had a hearing on expanding conceal carry, but targeting open carry in the process.

Funny thing, almost every single state firearms organization is against the proposed law… along with the anti firearms groups.  It passed through committee.  Waste of everybody's time.

the law is a freaking mess that creates more problems then it hoped to solve.

With the latest school shooting, all humane people are expected to jump up and do something to stop the next shooting. The most popular response among media pundits and national policymakers right now is an expansion of the various prohibitions now in place against guns.

For anyone familiar with the history of prohibitions on inanimate objects, however, these appeals to prohibition as a “common sense” solution are rather less convincing.

Americans and others have tried a wide variety of similar prohibitions before, and with mixed results at best. Nowadays, prohibitions on drugs are in decline as states continue to unravel prohibitions of the past and make the nature of prohibition less drastic and less punitive. And, of course, the prohibition of alcohol has been dead for decades.

The prohibitions of old have been deemed failures. But fortunately for prohibitionists, there’s a fashionable form of modern prohibition that won’t go away…

Nowadays, 88,000 deaths per year are attributed to alcohol abuse, and thirty people per day in the United States die in alcohol-related auto accidents. Heavy drinkers are more prone to violence, suicide, and risky sexual behavior.

In fact, if we compare these statistics, we find that alcohol abuse is significantly more deadly and problematic than misuse of guns. There were 36,000 gun-related deaths (including suicides and accidents) in the US in 2013, and as a percentage of all causes of death, alcohol-related deaths are more than twice as common as gun deaths.

What’s more, one-third of gun deaths are alcohol related. Thus, according to prohibitionist logic, we could eliminate one-third of gun-related deaths overnight by prohibiting alcohol consumption. So why aren’t we doing it? If it could save one life, wouldn’t it be worth it?

Most have concluded that saving one life is not, in fact, worth it. In practice, alcohol-related deaths (including those inflicted against third-party victims) are treated very differently than gun-related deaths.

For example, it is clear that alcohol is a central component in the more than 10,000 drunk-driving deaths that occur each year. So, is the response to restrict certain types of alcohol or populations that can buy it? Are background checks instituted to prevent sales to incorrigible drunk drivers? No, the response is to ban how alcohol is used in certain cases.

On the other hand, in response to the 11,000 gun-related murders per year, the prescribed response is to restrict the guns themselves. But, if we were to apply the same logic behind drunk driving bans to gun violence, the only legislation we would be considering would be something along the lines of special penalties for carrying firearms when mentally impaired, on psychotropic drugs, when sight impaired, or in crowded areas where accidents are more likely to affect bystanders. The mere purchase or ownership of guns would not be restricted, just as the purchase or ownership of alcohol is not restricted in response to drunk driving…

Consequently, some principled leftists, most of whom are radicals, do not subscribe to the dominant gun-control position of the left. But certainly the mainline left, dominated by university intellectuals, government employees, and politicos with nice houses in safe neighborhoods, see few problems associated with centralizing coercive power in the hands of “official” law enforcement.

The downsides of restricting alcohol, however, are plentiful for those who spend many hours at cocktail parties and send their children to booze-soaked elite universities to be paired up with the appropriate social class.

So, until this changes, we ought not expect much of a change in the double standard applied to alcohol and guns in terms of violence, health, and safety. The people who make the laws are quite happy having plenty of booze around. But they can afford to pay someone else to handle the guns for them.

Tired of hearing a stupid argument put forth by a morally, fiscally and spiritually bankrupt collectivist utopian idiocracy. Take a look at gun ownership, sales and ammo sales trends for the past 10 years.  And look at the percentages of gun owners that ignored registration in NY state and Connecticut after the bans went into effect.

We will be a formidable force, should push come to shove.

Well, I for one feel completely naked without my 7.62 by my side. Did I say that I loath weapons?  I do. But I feel naked without them.

And the pea shooters that we are allowed by the anally retentive bureaucrats here are a joke.

You should see the song and dance involved in using an explosive tool like the Hilti. Someone needs to get a grip on reality. 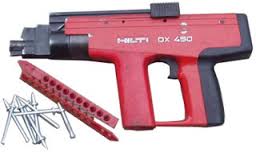 Death by "Gun Control" (Jews for the Preservation of Firearms Ownership)

The Human Cost of Genocide (PDF)
From the JPFO website:
"Why must all decent non-violent people fight against "gun control"? Why is the right to keep and bear arms truly a fundamental individual right? You can find the answers in this new book.
People frequently ask why we are so dedicated to our cause? This book answers that question by collecting the key facts and arguments in one place. People have asked us to present the whole JPFO argument in one place. We have done it. Available now in an easy-reading format and a handy size, the new book is entitled Death by Gun Control: The Human Cost of Victim Disarmament.
The message is simple: Disarmed people are neither free nor safe – they become the criminals' prey and the tyrants' playthings. When the civilians are defenseless and their government goes bad, however, thousands and millions of innocents die.
Professor R.J. Rummel, author of the monumental book Death by Government, said: "Concentrated political power is the most dangerous thing on earth." For power to concentrate and become dangerous, the citizens must be disarmed.
What disarms the citizens? The idea of "gun control." It's the idea that only the government has the right to possess firearms, and that citizens have no unalienable right to use force to defend against aggression.
Death by Gun Control carefully examines the "gun control" idea: its meaning, its purposes, its effects. It comes in many forms, but in every form it enables the evildoers and works against righteous defense."
"Chapters in the book teach about:

Thanks, Aaron, for this great posting. I found it surfing the web in 2018 and read through all 3038 entries. Wow! Found some fantastic info along the way. So, I joined the group just to make this post to thank everybody.

Not sure if anybody is still around, but for what it’s worth I would like to answer everybody’s question ever posted, imho. The answer is…drum role please, “It all depends”.

I’m 63 and have been shooting something since I was 5. My all time favorite is the sling shot. I have read so many, many articles of “how to” or “what is the best” that there is no counting and from that I have concluded that while everybody has an opinion most often they disagree. So… it all depends.

My 3 weapons for defense are a J frame, concealed hammer 5 shot 38 for ccw. I carry it with the first chamber empty, so really it’s a 4 shot. (reference Plaxico Burress) I use a custom Houge grip that I highly recommend for retention and just downright pointability. Also, I have a MAK 90 with synthetic stocks and a Maverick 12 gauge pump with an 18 1/2 inch barrel. My prefered load for the 12 gauge is the reduced recoil, Remington 00 buck. I have more firearms, but these three cover my defensive needs “for me”.

With that said, dang it Aaron, you have me wanting a Glock 19, 9mm. The Gen 5 is out now and it is calling my name. You and FerFal make a pretty good case.

For historical reference now, it’s September 2018 and Bret Kavanaugh is having his nomination considered for the SCOTUS and has just slammed the door to Senator Diane Feinstein when she asked him about “assault” rifles and the 2A. Brilliant, they are in “common use” and they are “not unusual” therefore they are constitutionally protected. I bought my MAK 90 back in the 80’s to send a message that there is one more patriot with a rifle and there is my reward! Common use, not unusual!

So, I’ll close here now with, be safe, peace to all and God bless ya! p.s. it’s not an assault rifle, it’s a defense rifle! 😉