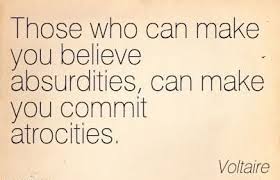 I find myself imagining what it felt like for him.  I never understood how the German people could be so manipulated as to do and support what they did until now.  It was a complete brainwash.

Answers to Q 15 & 16 are extremely disturbing

That was a fine example of social engineering at work.  It was paid for by the largest billionaires of course.  They seek to create States that function as well as New York, California, New Jersey, Massachusetts, Connecticut, and Illinois.  The Oligarchy exercising their rights to design and engineer a society with citizens who have no right to self-defense, free speech, religion, eat and drink what they want, etc…

I expect that this will continue in the years ahead.

'Free Speech is what I say it IS.' to paraphrase a Senator in the movie The Shooter.

Bloggers are not Journalists and are not covered by the First Amendment 'Sen. Dianne Feinstein (D-Calif.) insisted on limiting the legal protection to "real reporters" and not, she said, a 17-year-old with his own website.'

The law, passed by eight members of the city's mayoral-appointed health board with one member abstaining, intended to prohibit the sale of many sweetened drinks more than 16 ounces (0.5 liters) in volume

Answers to Q 15 & 16 are extremely disturbing

Did I read it wrong?
Question 15 and 16 are were jaw-dropping victories in my mind… Is this not saying that 71% of the officers view statements by public officials that they WILL NOT enforce more gun laws view those officials favorably?

Another 12% are ambivalent. Only about 16% out of the polled officers want to enforce more restrictive laws, is what I'm seeing. That's not good, compared to zero, but it's great compared to what I bet you'd find if you cropped this sample to, say, just NYC…

16 states that about 45% would vocally oppose more gun control (Seattle's recent I594 brought a significant amount of LEO's out saying they did not support the legislation), while 7% said they'd shut up and color and 10% said they'd push the agenda. So again, we're seeing 1/10 or so of the LEO population who's all for supporting the elitist agenda.

More good news in Question 23, where 80% of the officers said a legally armed citizen would have dropped the number of casualties in Aurora and Newtown.

I think that the majority of officers are solidly on the side of the citizens. Sadly, discretion is being worked out of the officers toolkit, and we are inundated with negative images of police. I firmly believe this is a tool of people like Bloomberg to ensure that we are alienated against the "enforcers". If we view the LEO as the 'bad guy', it's easier for him to enforce laws against us, and we all know that people like Bloomberg are more equal than us.

We need to turn this anti-LEO sentiment into anti-Legislator/Senate/Billionaire sentiment. Those are the guy who are dirtying the pool for all of us.

I look at it from a pessimists view.

Q16, up to 37.9% of police department leadership will enforce constitutionally illegal gun round up.

It's one thing for the guy on the street to say no I'm not going to do it, it's quite another for a 20 year veteran to be facing losing his job, pension, etc because he won't follow his departments policy and orders.

You get the picture.

Grand Rapids MI, the department has made a habit of arresting people legally carrying firearms.  State constitution preempts local firearm ordinances.  Police Chief and his dept insist their local rules trump state constitution.  It has earned them a federal lawsuit.

I had a former neighbor that was a Sgt in the local PD.  He was absolutely insistent that non LEO should not be allowed firearms.

“It’s one thing for a guy on the street to say no I’m not going to do it, it’s quite another for a 20 year veteran to be facing losing his job, pension, etc because he won’t follow his departments policy and orders.”
I had this conversation with a retired cop recently. His impression is exactly the opposite. He said the veterans don’t want anything to do with rounding up guns, legal or illegal. The young guys, presumably poisoned with testosterone, are willing to kick down doors if ordered to do so. He didn’t say what women officers were likely to do.

You may believe the confiscation won't happen… Explain Buffalo NY

"They're quick to say they're going to take the guns," Tom King, president of the New York State Rifle & Pistol Association, told Fox News. "But they don't tell you the law doesn't apply to long guns, or that these families can sell [their loved one's] pistol or apply to keep it." King said enforcing this little-known state law proves police are targeting law-abiding gun owners.

This is just starting to get some airtime in the alternative media and I wanted to make sure everyone here saw it too.  I know there are a number of us on PP in the Central Texas area, so this directly affects us, but it is important for everyone to know what TPTB actually are saying.

Watch the video, it's very short and important not to just take the written words but to hear the police chief of a city of ~1 million people actually say these things.  We generally have the same understanding of the 2nd Amendment on PP, but I'm also curious to hear what our community has to say about these comments in light of the following from US Code, Title 18, Chapter 44, Section 926:

"…No such rule or regulation prescribed after the date of the enactment of the Firearms Owners’ Protection Act may require that records required to be maintained under this chapter or any portion of the contents of such records, be recorded at or transferred to a facility owned, managed, or controlled by the United States or any State or any political subdivision thereof, nor that any system of registration of firearms, firearms owners, or firearms transactions or dispositions be established. Nothing in this section expands or restricts the Secretary’s authority to inquire into the disposition of any firearm in the course of a criminal investigation…."

And from Section 924 under Penalties:

"…whoever-… (D) willfully violates any other provision of this chapter, shall be fined under this title, imprisoned not more than five years, or both."

Not that these provisions are adhered to already, but these laws are still on the books and selective enforcement only shows how far we have already fallen from any semblance of Rule of Law.