FWIT I side with William Cooper that Alex Jones is CIA disinformation.

I tend to agree.  He does a great deal of fear mongering, and violence mongering.  Meanwhile, his sponsors are making loads of cash on selling gold/silver at outrageously inflated prices, using tactics of dubious legality.  (Ask me; I got burned).

Alex seems to operate unimpeded, with only the occasional (loudly bewailed) harrassment from the police/FBI/CIA.  He also gets some mainstream airplay, without being belittled by the talking heads, which would be impossible if he wasn’t serving a useful purpose for the military/industrial complex.

Alex gains credibility with the movement by including a lot of truth in his broadcasts, but he also, insidiously, includes disinformation.  I have stopped listening to him altogether, as I tire of trying to sort out the truth from the lies.

I cannot substantiate this, but my guess is that Alex’s role is to whip up a revolt that can then be supressed with police powers.

Glad to hear that someone else is taking Alex with a grain of salt.  It’s always prudent to have a modicum of suspicion of anyone who gains "rockstar" status.  Behind every star there’s a starmaker with a motive.

The modus operandi is to take something essentially true, (that powerful people work together behind the scenes, and form policies we aren’t aware of) and support those who use questionable evidence to support that particular point of view. This vaccinates us from the truth. Jones is essentially correct, maybe utterly sincere, but he’s likely getting help from the intelligence community. A very popular method is to have an operative befriend the public mouthpiece, and feed them all kinds of dubious info. People love the sensational too, so that’s a synergistic symbiosis.

Here’s a quote from an interview with Peter Levenda on the Camelot website:

PL:  Well, I mean, what’s very amusing to me in a sardonic sort of way is the fact that in the United States if you talk about conspiracies, you’re pooh-poohed. You’re shot down. It’s considered, you know, paranoid fantasy.

And yet we recognize without hesitation the fact that conspiracies like this exist in every other country on the planet. Right? So when Benazir Bhutto, the former prime minister of Pakistan, was gunned down last year in Pakistan, everyone said of course it was a conspiracy. There were elements of the Pakistani secret police involved. Al Quaeda may be involved, or the Taliban, or who knows what. But automatically it was a conspiracy.

However, according to mainstream historians, not a single person assassinated in this country has ever been assassinated by a conspiracy! [laughs]  No conspiracy. Nothing to see here. Move along. Right? We have this idea somehow that the U. S. is immune to these events.

And yet we overthrow dictators in foreign countries. We’ve overthrown and committed assassinations in Guatemala, in Iran back in the days of the Shah. We overthrew the government of Allende in Chile. We put Pinochet in power. All of these things we do on a regular basis and we’ve done it for years and years and years. And yet somehow it doesn’t take place inside the United States. Why is that? Why is it so impossible to believe?

Levenda is great. I appreciate Jon Rappaport’s point of view, too. The text seems oversize. Sorry about that.

"I will now use a word.  Commit it to memory.  It is a key word.  It summarizes the growing trend at the top of power on this planet.  Not just at the top, but at many levels of power.  The word is: Gangsterism.

Eat that word.  Digest it.  Think about it.  Roll it around in your mind.  Gangsterism.  Every man for himself.  Form your own group.  Make your own deal.  Grab everything that isn’t nailed down."

About time for some Definitive Conspiracy Theories,

Okay, so I was trying to piss on someone’s fire on facebook because they seem to be ‘one of those’ that seem to believe that OBAMA is the world’s Saviour and will bring world peace and economic stability. I actually ended up using some of Alex Jone’s material to show a few points.

The reason for my posting is to express my love/hate relationship I have with A.J. because I love how he has some great research and presents some of the data really well. What I hate is how he EXTRAPOLATES so much of that data and the language he uses to do so.Especially when he uses language like "enslavement" or "Global Domination" in that raspy fear mongering narrative voice he uses so much. (you should hear my impression

What it all comes down to is that we can all have a wide variety of sources that we enjoy even though they might not always follow the ethical code that journalism should. Take Bloomberg for example and how Chris’s recent post demonstrated that a news source that has often been used right here (at least in many of the Daily Digests) can subject to interest driven manipulation.

About time for some Definitive Conspiracy Theories,

These looked interesting by their titles but they’ve been removed due to content violation. I think it might be a conspiracy 😉

Any other sources of these?

Here is an interesting little tidbit posted on the globalresearch site:

[quote]…………….Ptech was founded in Quincy, Mass. in 1994 and by 1996 had secured a contract with DARPA to help transfer commercial software methodologies to the defense sector.[12] In 1997, it gained security clearance to bid on sensitive military contracts and bid on work for a range of other government agencies.[13] Within four years Ptech had built up a stable of clients that would make any third-party software vendor green with envy. From the inner sanctum of the White House to the headquarters of the FBI, from the basement of the FAA to the boardroom of IBM, some of the best-secured organizations in the world running on some of the most protected servers housing the most sensitive data welcomed Ptech into their midst. Ptech was given the keys to the cyber kingdom to build detailed pictures of these organizations, their weaknesses and vulnerabilities, and to show how these problems could be exploited by those of ill intent. For all of its incredible success, however, many of the firm’s top investors and employees were men with backgrounds that should have been raising red flags at all levels of the government.

The firm was founded on $20 million of startup money, $5 million of which was provided by Yassin al-Qadi[14], a wealthy and well-connected Saudi businessman who liked to brag about his acquaintance with Dick Cheney.[15] He also had connections to various Muslim charities suspected of funding international terrorism.[16] In the wake of 9/11 he was officially declared a Specially Designated Global Terrorist by the U.S. government and his assets were frozen.[17] At the time, Ptech’s owners and senior management denied that al-Qadi had any involvement with the company other than his initial investment, but the FBI now maintains they were lying and that in fact al-Qadi continued investing millions of dollars in the company through various fronts and investment vehicles. [18] Company insiders told FBI officials that they were flown to Saudi Arabia to meet Ptech’s investors in 1999 and that al-Qadi was introduced as one of the owners.[19] It has also been reported that Hussein Ibrahim, Ptech’s chief scientist, was al-Qadi’s representative at Ptech[20] and al-Qadi’s lawyers have admitted that al-Qadi’s representative may have continued to sit on Ptech’s board even after 9/11.[21]

Ibrahim himself was a former president of BMI, a New Jersey-based real estate investment firm that was also one of the initial investors in Ptech and provided financing for Ptech’s founding loan. Ptech leased office space and computer equipment from BMI[22] and BMI shared office space in New Jersey with Kadi International, owned and operated by none other than Ptech’s sweetheart investor and Specially Designated Global Terrorist, Yassin al-Qadi.[23] In 2003, counterterrorism czar Richard Clarke said: "BMI held itself out publicly as a financial services provider for Muslims in the United States, its investor list suggests the possibility this facade was just a cover to conceal terrorist support." [24]

Suheil Laheir was Ptech’s chief architect. When he wasn’t writing the software that would provide Ptech with detailed operational blueprints of the most sensitive agencies in the U.S. government, he was writing articles in praise of Islamic holy war. He was also fond of quoting Abdullah Azzam, Osama Bin Laden’s mentor and the head of Maktab al-Khidamat, which was the precursor to Al-Qaeda.[25]

That such an unlikely cast of characters were given access to some of the most sensitive agencies in the U.S. federal government is startling enough. That they were operating software that allowed them to map, analyze and access every process and operation within these agencies for the purpose of finding systemic weak points is equally startling. Most disturbing of all, though, is the connection between Ptech and the very agencies that so remarkably failed in their duty to protect the American public on September 11, 2001.

Anyway, can you girls tell me if these two Putins are the same? 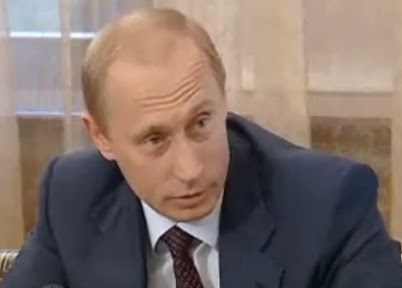 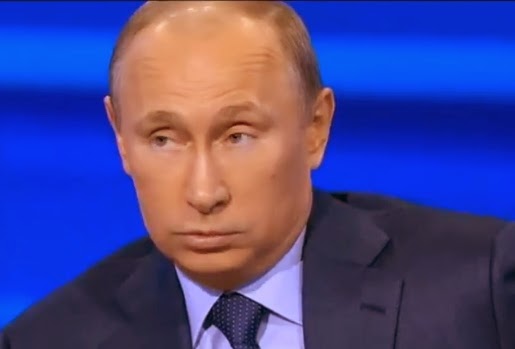