The Covid Microchip Conspiracy: Then & Now

But here, the difference between a nutty “conspiracy theory” and a tech company’s “good idea” is barely a year and a half. 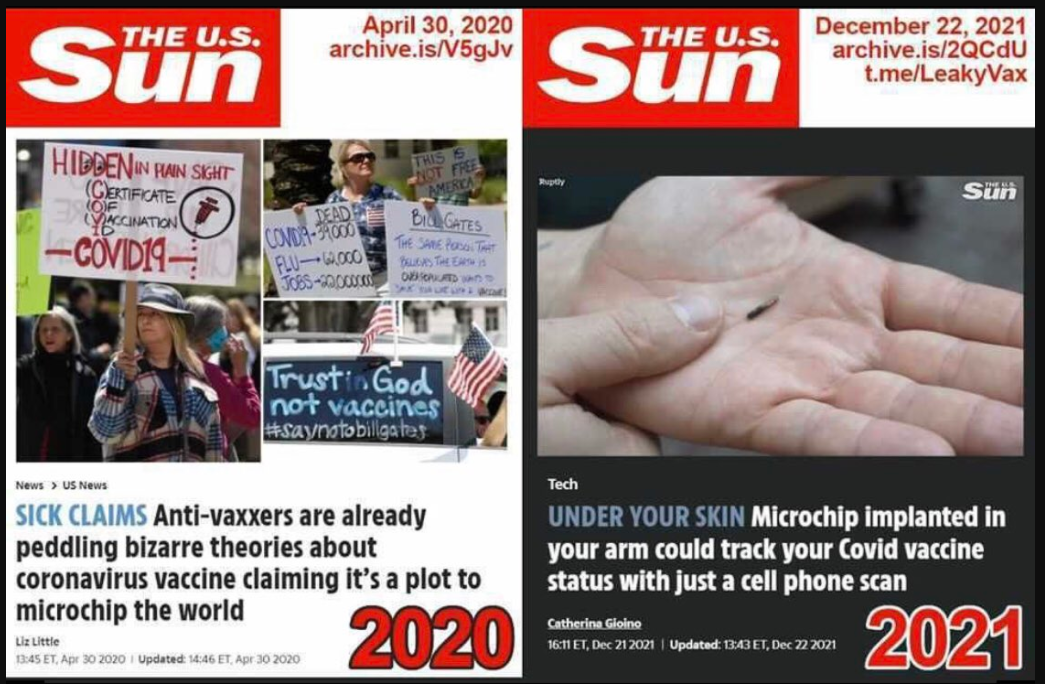 Of course some company or another would rise to the opportunity Covid passports offer. Wouldn’t it be ironic if it was the April 30 issue of The Sun that gave microchip tech startup, Epicenter, the idea? Yeah, that would be funny.

But, wait! Hang on: Back on April 12, 2021, The Sun reported on a DARPA scientist’s press release, hosted on the USS Theodore Roosevelt, and covered by 60 Minutes. The scientist, Matt Hepburn, noted that DARPA had developed a small, gel-like implant:

He said: “You put it underneath your skin and what that tells you is that there are chemical reactions going on inside the body, and that signal means you are going to have symptoms tomorrow.”

… Mr Hepburn explained how [Navy] crew members would be able to use the device. He said: “’It’s like a “check engine” light.

Great: a “check engine” light for our bodies. That doesn’t make it sound like we’re just machines in need of an upgrade, does it?

Is this where we insert transhumanism conspiracy theories?

Turns out, though, that DARPA could be a bit late to the game. The Sun’s article is about older technology.

Epicenter, which is a Swedish company, says its proposed Covid Passport chip is just the repurposing of an existing product it has been using in-house since 2015. About 100 company employees have implanted chips that make it easy for them to do office-related things like enter locked doors, activate printers, and buy smoothies – because, as we all know, tech company employees are not only interested in the latest body-enhancing gadgetry, but also prioritize snacks that contribute to a healthy, long life.

In a video shared by Epicenter, Hannes Sjöblad, the chief disruption officer (I kid you not), has the chip in his arm and simply waves a smartphone over it to pull up his vaccination status.

‘Implants are very versatile technology that can be used for many different things, and right now it is very convenient to have COVID passport always accessible on your implant, he said in a statement.

But don’t worry, conspiracy nuts. Implantation is just beneath the skin, and is “completely reversible,” according to Sjöblad.

Not that you will ever reverse it. Not if the chip is what lets you through doors. Besides, it’s very convenient, and re-programmable:

Many venues, restaurants, bars, concert halls and museums, across the US are requiring visitors present their vaccination status in order to enter the building.

And Epicenter wants to make presenting this information as easy as possible.

‘In case your phone runs out of battery, it’s always accessible to you. So of course, that’s how we use this technology today, next year we are going to use it for something else,’ said Sjoblad.

Never mind. Let’s not run down any conspiratorial rabbit trails.

There are no known plans to utilize the technology for the Covid vaccines in the US and most other parts of the world.

And generally, experts agree the technology is unlikely to become widespread due to concerns surrounding public freedom.

Well, that’s good news. At least we don’t know of any plans to chip us. I feel safer already.

P.S. Epicenter’s first chip was implanted in 1998. It was revealed in 2017 that company officers were using chips implanted in company volunteers to monitor employee food purchases, bathroom breaks and work habits.

The chips aren’t currently for sale but Stockholm-based Epicenter made headlines earlier this year [2021] when they offered them to staff as passkey inserted in their hands.

It reportedly hosts parties when people get “chipped”.

I can hear the conversation: “Hi, welcome. Drinks are over there, and…would you like a chip?”

Before Covid appeared one of the biggest pushes worldwide was the Internet Of Things.  Involving 5G and everything imaginable that could contribute to dissemination of digital data.  Because if you can control data, you can control the world.  Chips aren’t a conspiracy theory at all, they are merely an issue of timing.  Chips to track medical data were suggested a long time ago.  Covid makes the timing now.

I like internet of things AT WORK. I am big into industry 4.0 type projects for process control and refinement, including some work with AI assisted process control. However, I do not like the idea of automating my house completely. The strange thing is my husband, who does not work with technology like I do, is all about automation in the home. Maybe it is because I can see much easier ways that it can be abused than he can?

a supposition or a system of ideas intended to explain something, especially one based on general principles independent of the thing to be explained.

why would any theory not be worthy of analysis?  the problem with the term “conspiracy theory is it marginalizes people and stifles investigation into causes.

so my question is “why do you hate conspiracy theories?”

Okay maybe I’m nuts but I could SWEAR I had already seen a youtube ad for a company advertising just this – an implant that would track their vaccine passport, payment methods, etc –  and was touting how convenient and easy it would make everything.