Sweden today passed the 10,000 mark in COVID fatalities and the media are eating them alive, some calling for a tribunal and putting the entire govt on trial.

Sweden’s resident Gyro Gearloose continues to say everything is just jim-dandy, even as he’s been condemned by the WHO, the CDC, the ECDC, the FDA, and more.

Sweden’s own ‘Corona Commission’ recently came out with their condemning report as well, but Gyro just dismisses it all with a wave of his hand. All the while political party leaders grow more furious. Something’s got to give and we’re all hoping it happens by yesterday.

…even as he’s been condemned by the WHO, the CDC, the ECDC, the FDA, and more.

Which is interesting considering their last 3 days death counts have been in the teens and then just 3 yesterday.

Their daily death chart looks better than most Western nations plus their economy is still open.

Deaths per million was not one of their key numbers, so here they are, from 1005 per million out of a 10 million population, which compares rather favorably to the USA with 1191 as a whole coast to coast with a variety of NPI’s, and compares very favorably with some of the states with the most theatrics like

Texas apparently is low on theatricality, so they suffer terribly with 1086 deaths per million, quite comparable to Sweden.

South from there Mexico has 1056 deaths per million, except for the region of Chiapas, which would have an (extrapolated) death rate of 40 per million according to data from December.

Swedens death count has a lag of at least a week. If you keep track of the numbers for a couple of weeks, you’ll notice that the numbers of two weeks ago are still changing!

What exactly’s your point? Boring evening or?

That is false. They had something like 351. They claim it matches Finland’s entire 2020.

A FOI document from Tegnell to his boss Carlson and a colleauge in Finland dated 14 March 2020. Tegnell proposes: ‘one thing about leaving the schools open is we will more quickly reach herd immunity’.

Tegnell is supposed to be an epidemiologist. But he doesn’t know. And in any case everyone would and did condemn him for this. And he kept his true motives hidden and even denied being after herd immunity, telling the media ‘our strategy appears to have herd immunity as its goal but it doesn’t’.

The media are attacking now. For how long isn’t known.

Parliamentarian Ebba Busch accuses the government of doing it intentionally, finally revealing that she’s been at several high-level meetings where the others salivated at the thought they could beat the rest of the world if they pursued herd immunity. The Swedish people found out now, and they don’t exactly like them performing experiments on them. 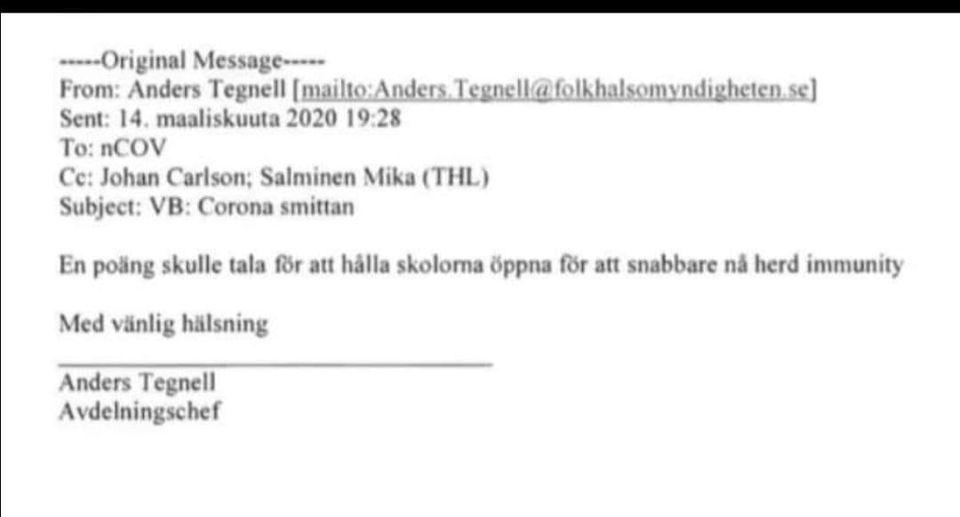 How isn’t it obvious to you at this point that not doing anything is far better than what most governments are doing? Please tell us exactly what you’d like Tegnell to do… what do you want him to do??

I followed the posts from nyhetersverig from the start because I like any kind of dissident, even if I do not agree. The issue in Sweden is not that they took a different course, but the fact that they lied about it, and that they actively sacrificed elders by withholding treatment. A couple of months ago nyhetersverig posted an article in Swedish about elders not being fed anymore and left alone to suffocate. I followed up on this by starting to read Swedish media outlets. There were several reports about this.

I think that this is a scandal beyond imagination that will have severe consequences for politicians and “experts”. With all the knowledge we had as of June last year, I thought, and still think that lockdowns are not needed at all: high doses vitamin D, zinc, ivermectin, (synthetic) quinine, etc would reduce impact with a factor 10 at least. It is one thing that our governments are somehow withholding and combating information about cheap highly effective supplements and treatments. It is something completely different if at the same time certain groups of people are left to die without any care at all…