She’s described here as ‘one of the leaders’. She is the leader. Formally she’s the political boss of the madman killing off people in Sweden. In a breaking update, the prestigious Caroline Institute (Karolinska) just published a new study, complete with drawings that Tegnell can colour in any way he wants, that once again shows how FACE MASKS can actually be a good thing. But madman Tegnell dismissed these and ALL such studies today as ‘irrelevant’. And people keep dying for this stubborn person. Here you meet his boss, the one who decided it wasn’t good that people self-isolated because it wouldn’t be fair to those who couldn’t.

Sweden’s epidemic is largely over.  Rough CFR is around 3%.  Fewer people are dying every week – it is down to (about) 6 people per day, in a population of over 9 million people.   Here’s what that looks like: 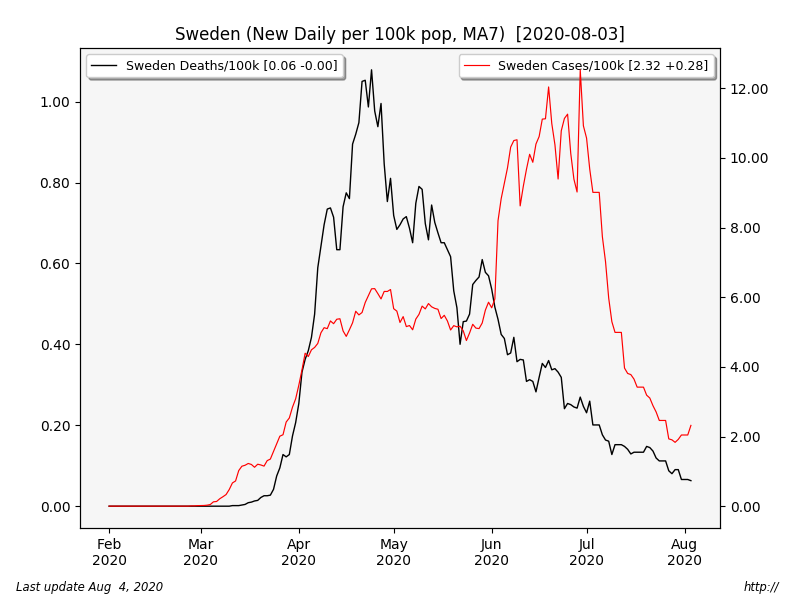 The UK’s experience is also largely over.  Yet their CFR (8.3%) is more than twice Sweden’s CFR (3%), and more people are dying in the UK every day than in Sweden – and that’s after adjusting for population! 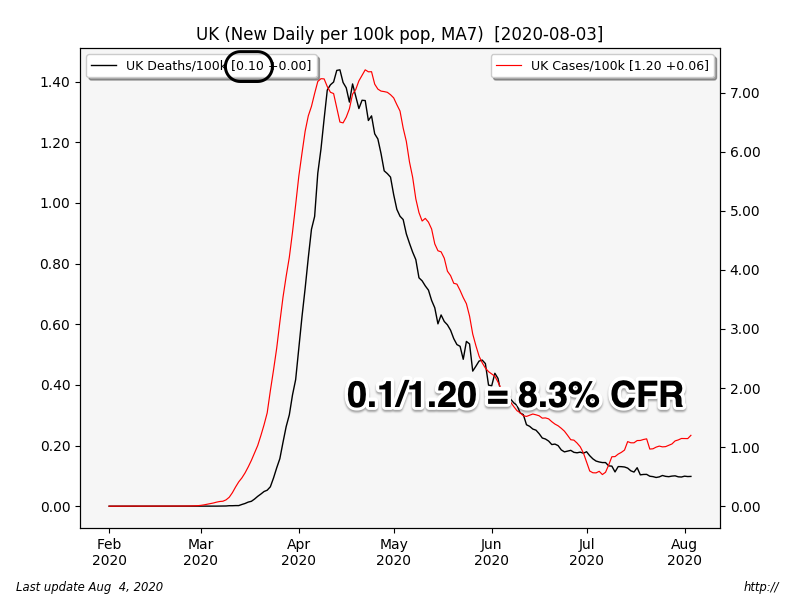 Curious, that.  I wonder why?

I am having problem really believing that this is just going to go away.  And the answer is to let it burn through the population and that will actually decrease the death rate – and that sheltering will actually lead to more cases and fatality.

This goes against all logic that I can even imagine.   Somehow a lock-down is actually causing more cases.   While believing that not doing it leads to mass immunity.   Somehow once 15% get it, its enough to make it not spread to as many or as many vulnerable people.    Its really far reaching logic.    This, to my normal understanding of disease and infectious disease process, looks very mystical and magical.   Not saying that misunderstood things dont look that way.  But,  at this point, jumping on board with that theory is really really premature.  I would have to some really good science and explanation for this.    I have seen many professionals offer ridiculous theories about this disease, that just sound stupid to an intelligent person.     This is one of those.  So, here is how i interpret this new burn-out theory.   So, we let it burn through the healthy young population where it is extremely transmissible.  Most will have mild if any symptoms.   Once it burns through these normal and super spreaders,  the rest of us are safe to come out and play again.   done.. finished.   pandemic over.   (one small problem with this )  This is assuming that the older people are out and about.   The problem is I believe the youngers are out and about and older and sick people are sheltering like heck regardless what governments want.   So,  yes its burning through and dropping numbers because you have changed the whole demographic of who is becoming infected in these charts..   Its just insanity.     Just looking at my home county, those 20 somethings account for 50% of all infections.. It was not like this a month or two ago.  That behavior will definitely influence those charts , and make them appear as they are regardless that the same risk is still present.  But there are less people to spread it so it may slow it down among the more vulnerable group.   The problem is its not presented with the appropriate explanation..  If they tell everyone all will be well if we just let it burn – you will have those older folks out and about thinking it will disappear.. That is not what is happening..  We have to put the young ones out first and make sure they get infected.  School maybe the right idea.   AGAIN.  THIS is just my take.  But it wont work if we just open the gates again.   It needs to be a planned burn.   But I still believe you could get this again 4-12 mos down the road.. AND what could happen then?  ADE?  what if you get the regular cold after this?  a lot needs to be answered and tested before we just burn it intentionally.

Thanks for the data and the analysis, Dave!

Much appreciated as a Swede.

I track charts every day.  I try to “make sense” of why the charts are doing their thing.  This “large bump” chart appears everywhere.  Places that lock down, and places that don’t, all have charts that look roughly like this – the exponential growth charts.

“The experts” say that number for herd immunity is 70%.  Why not 100%?  Shouldn’t everyone have to get sick before the epidemic stops?  The experts say no.  New cases will still occur, but “exponential growth” will not happen any more.

So what causes that exponential growth?  That’s the question.

What’s more, once you concede that not everyone needs to get the virus for the exponential growth to stop, then all we’re talking about is – what will the percentage be.  70% or 15%.

Then go back to those charts again.  Clearly, the exponential growth phase is largely over in Sweden.  It wasn’t due to lockdowns.  It wasn’t due to mask wearing.  Are Swedes just that tough?  I don’t think so.  “Once you eliminate the impossible, whatever remains, however improbable, has to be the truth.”

All the stuff I have read says 10-20%.  I went looking for an explanation as to why.  You may not like this explanation.  That’s great!  Find another one!  But the data I read says the exponential growth stops at 10-20%.

Some folks in the UK suggested there was cross-immunity provided by prior corona virus infections.  That could help as well.

Honestly though at some level I don’t care about the explanation.  I will just point you at the chart, and say: “look at that.  No exponential growth any longer.”

Proof by example, as they say.

And of course we could live in fear and think “oh my God the second wave!  Hide in the basement!  Give up hope!”  That’s what the vaccine makers want.  And Pharma.  Cui bono there, do you think?  Unfortunately, they control the media.  Advertising dollars.

Certainly I don’t want to get sick.  But neither do I want to blindly accept all these weasels are trying to feed me.  It just isn’t in my best interest to do so.  They want to get rich at my expense.

You keep ignoring the clear-cut data davefairtex keeps presenting to you… while you keep going to sources that are between NPC officialist parroters and criminal organizations like this Al-Jazeera, who help groups like ISIS and others overthrow Qatar/Saudi Arabia’s rivals, such as Gaddafi in Libya, which now has open-air slave markets.

[My post keeps getting deleted so I have to trial-and-error to find out which word is being CENSORED… crazy! This must be addressed!!! … OK so if it’s like below, it’s fine, it stays up, but if I add blockquotes, then it gets deleted… WTF?!?!? Using “>” also doesn’t work, post disappears. This is incredibly fucked up…]

This, to my normal understanding of disease and infectious disease process, looks very mystical and magical.

So, we let it burn through the healthy young population where it is extremely transmissible.

Evidence of that? Evidence that an immunocompetent individual, such as a child that hasn’t had enough time to destroy his/her immune system, would allow the virus to replicate to a degree sufficient to make it “extremely transmissible” but insufficient to experience any symptoms? Except for two new studies that I’ve yet to examine, there has been virtually NO evidence of that, and in fact it’s an already RETRACTED claim by the global health mafia that would love to use this idea against you if they believed they could get away with it (might have to do with retaining credibility among certain communities like virologists)… Like governments, you haven’t updated your initial assumption of common (rather than rare) asymptomatic transmission… but the WHO has, and even the NYT (who’d also love to use that idea and ARE using it against you anyway) has admitted it.

Its just insanity. Just looking at my home county, those 20 somethings account for 50% of all infections.. It was not like this a month or two ago.

It takes up to 2 months for the body to shed already neutralized viral material. The PCR tests make no such distinction of live vs dead viral RNA. They can also confuse SARS-CoV-2 with hCoV-OC43 (a common cold virus) which people will have much of the time. Reporting “positive tests” as “cases” is what is insanity; in fact I’d say it’s nothing less than terrorism.

Exactly, and the super-spreaders are PREsymptomatic, not asymptomatic.

And of course we could live in fear and think “oh my God the second wave! Hide in the basement! Give up hope!” That’s what the vaccine makers want. And Pharma. Cui bono there, do you think? Unfortunately, they control the media. Advertising dollars.

Yep, and this is even more ridiculous when you know (if you’re a poster on this forum) there’s a bunch of cures that work very very well. It has to be some kind of an addiction to fear programs, that makes life interesting.

I believe we owe the Swedes a debt of gratitude.  They, alone among western nations, decided not to use the CCP strategy of “lockdown”, and in so doing provided a fascinating case study that ended up putting a finger in the eye of a whole lot of experts.

Those experts are probably not pleased with the world having a “control group.”  It is why vaccination studies never have a “placebo arm”; it wouldn’t do to compare your vaccine intervention against “no intervention.”  What would happen if the “no intervention” group were seen to have better health outcomes?  That would be bad.

Early on, I must confess, I was concerned for Sweden, but I was watching closely to see how things turned out.  I’m simply thrilled with the results.  I mean, we all could have done better with this thing, and it is still early days, but like your guy said, “talk to me in a year”.

I’m very excited to see what Sweden’s GDP print will look like.  My guess is, the drop will be a small fraction of what the rest of Europe experienced.  That alone will save thousands of lives – and small business – and marriages, and alcoholism relapses, and drug overdose victims.

I agree with you that the jury is still out. And that some parts of the emerging strategy in Sweden has been less impressive, such as, “no masks are needed”.

But I’m personally so pleased with living in a country without draconian lock-downs. For mental health reasons.

The reported official GDP number for Q2 is reported to be -8.6 % (Source: SCB, The Government Authority for Statistics). I understand the figure as change from Q1, not Q2 2019. According to one large Swedish newspaper, the mean figure for the Eurozone is around – 12 % for Q2. Has anyone any better data?

Having gone through a lockdown, I totally agree about your “mental health” perspective.  Physical health too.  Its tough to exercise sitting in your room.  I definitely got fatter.  And my mental health went downhill as well.  And as we know, virus doesn’t pass outside, in heat & humidity.  Something my region has plenty of.

Here are the countries I’ve received updates for – from the ECB’s Statistical Data Warehouse – change in raw GDP value since Q4 2019:

And now your number:

Just replace “ES” (Spain) with your favorite country code.  Some haven’t updated yet.