Sweden’s Anders Tegnell is, to say the least, bizarre, and many more colourful epithets have popped up in recent weeks and months. Frankly, a great number of Swedes – and that number is growing geometrically – are sick and tired of him and his bizarre unfounded theories, often concocted, it seems, with his unseen mentor Johan Giesecke ‘over a glass of wine’, as Giesecke’s put it on several occasions. Giesecke’s of course the one who told Swedish media that Corona was mostly hype, would never escape Wuhan, and was, at the worst, the equivalent of a ‘heavy head cold’ (‘en häftig förkylning’).

And we’ve seen the bizarre correspondence between the two when an independent journalist cited the freedom of information legislation and demanded copies. A lot of that correspondence was removed/destroyed before complying, we know that today, but even the correspondence that remained shocked people greatly.

Here’s another gem published this evening by someone online. It’s a letter from Tegnell himself to someone at the ECDC. Tegnell again pushing on with his bizarre crusade against face masks. It’s not long ago that it became evident that he didn’t even understand that they’re used mostly to protect others from oneself (really).

As the poster points out, the letter was sent to the ECDC 5 April and the ECDC published their recommendation in favour of use of face masks three days later on 8 April.

This letter was not previously revealed. According to the people in the group, it was shared by the ECDC and not Tegnell’s people who’d refused to send it.

Comments and opinions about Tegnell are, what it seems, reaching a new all-time low. ‘It’s frightening that he behaves like this’, says one who points out that Tegnell was also engaged in trying to stop Finland from closing their schools. 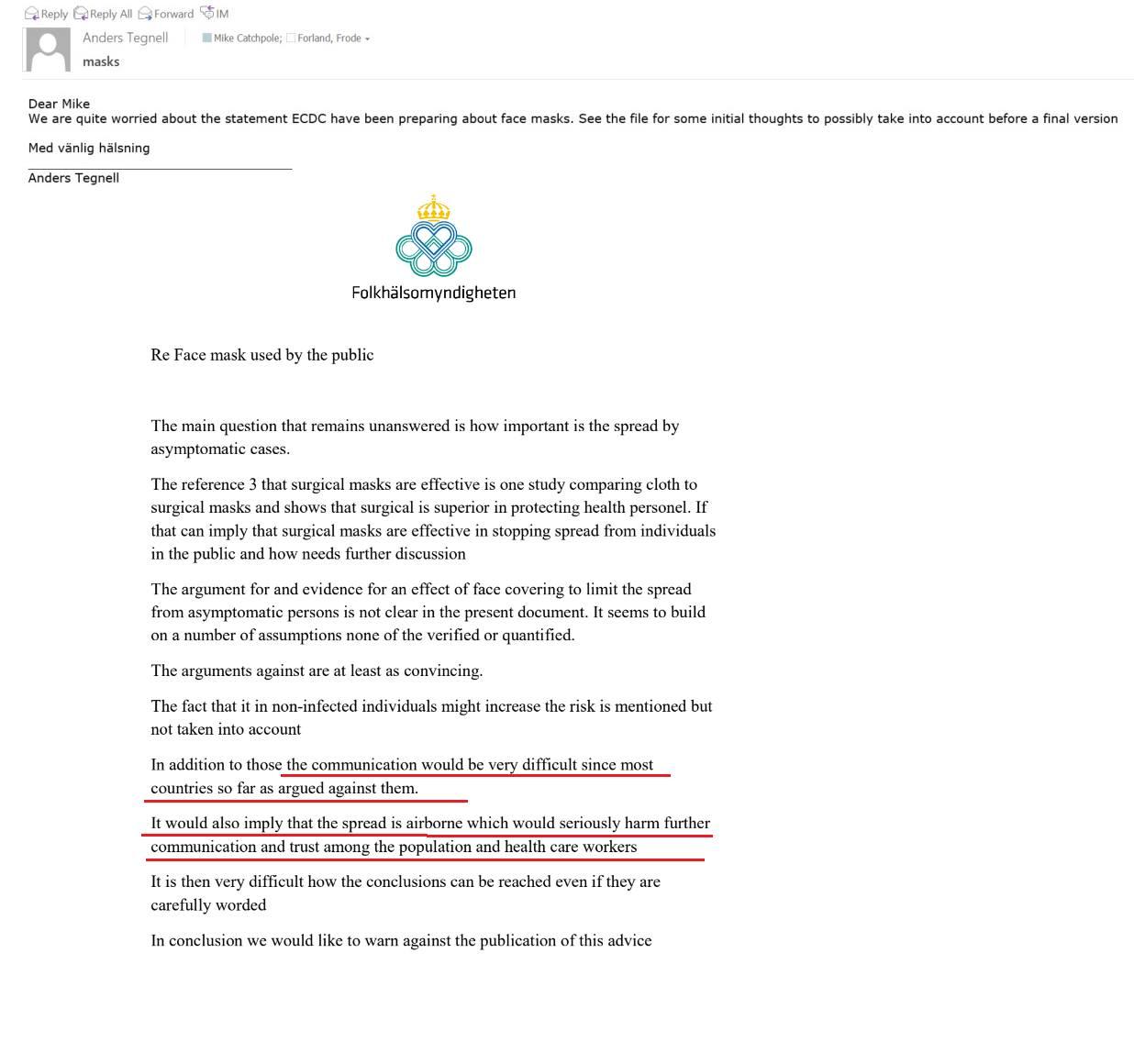 As always, I await the GDP data from Q3 for all the affected countries.  We will then be able to see if the price paid for the lockdowns (poverty, suicides, drug overdoses, divorces, lowered immune systems, destruction of peoples livelihoods, businesses, and the like) are worth the achievement of pushing infections off into the future.

Little known fact: people dying from economic impacts are just as dead as those dying from COVID-19.  Just that nobody calculates these deaths in real time.

“Without an economy, everyone dies.” — me