Now things become clear. Now two of Sweden’s party leaders, Ebba Busch and Jimmie Åkesson, have finally come forth and blown the whistle on the government.

‘I have partaken in the party leaders’ crisis meetings since March and it’s been obvious all along that the government, with the coalition parties and agencies, have pushed the idea of a broad spread of the Corona virus as a way to make Sweden appear superior to other countries.’

The current government of Sweden, based on a flimsy coalition with the Centre (Farmers) Party and the ‘Liberals’, seem obsessed with a reputation their nation can no longer have.

They’ve lied to the Swedish people and to the world. They’ve pushed or tried to push other countries in the wrong direction. Their overriding goal has not been to protect their own people but to improve the reputation of their country.

Things turned out well. Sweden must demand the immediate resignation of those clowns. 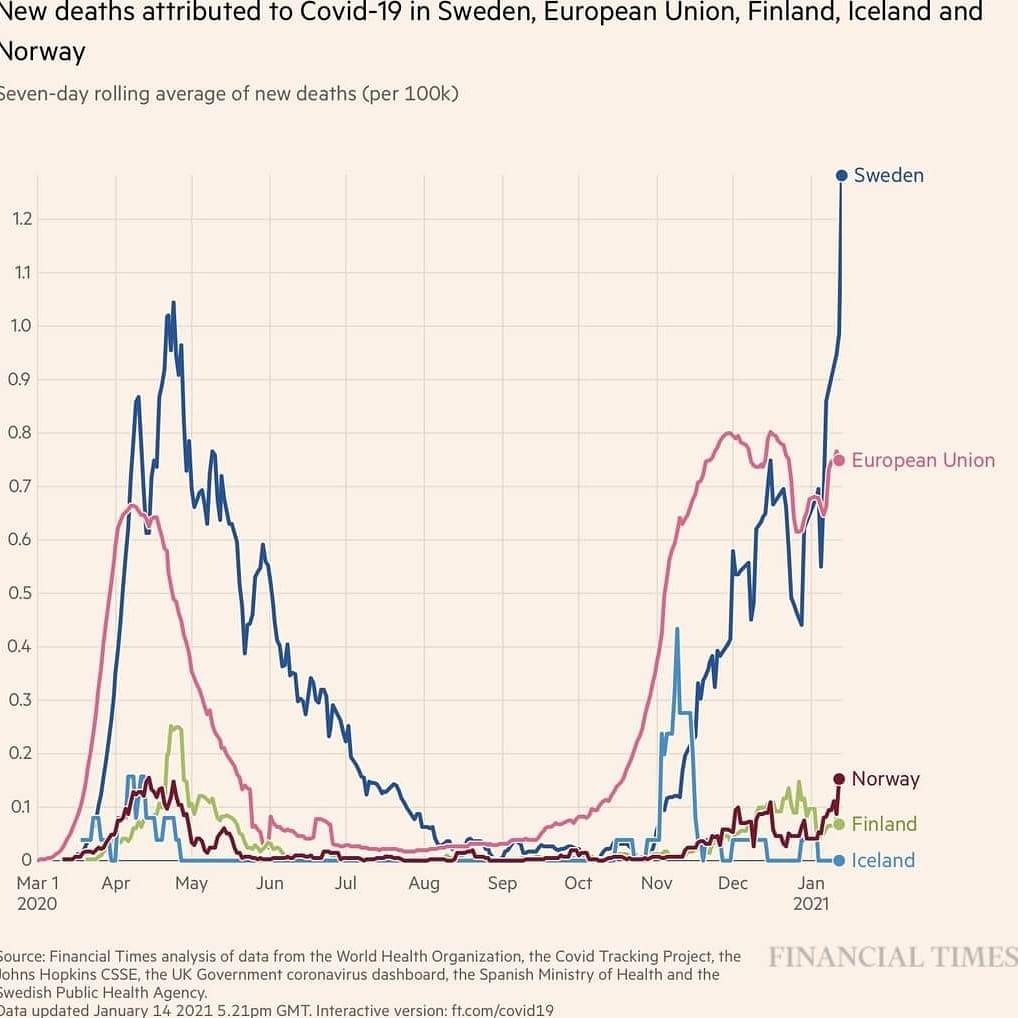 So I have to say, if given a choice between living in Sweden, and living in the UK (or France, or Spain, or Italy, or Germany – one of the big Lockdown Nations), I’d pick Sweden any day of the week.

I’d much prefer to take my chances with this virus and live my life, rather than having the government tell me I had to hide in the basement whenever they decided it was time for me to do that.

Especially if I had a business, or a job that couldn’t be done at home.

But that’s just me.  I get the sense other people feel differently.

Months – years – of my life, just gone.  I prefer just to take my chances and live.

Less than the UK, Spain and the USA.  On par with several other European nations.

Yeah, what a surprise, now that winter has fully hit and people are massively vitamin D deficient, mortality rate is increasing. They had months and months to figure it out, and they seem to be in a worse position than their Scandinavian neighbors by that metric. But of course that’s far from the most important metric. Keeping your freedom is far more important, as @davefairtex pointed out for the nth time. And herd immunity will be reached sooner, but with a lot of totally unnecessary deaths. This is all assuming they haven’t changed their PCR cycles threshold or any other testing fraud parameter (in other words the reported increase in mortality may itself be fake).

What do their “flu” deaths look like this year in comparison to previous years?

This is from the WHO’s flu tracker–hint you won’s see any.

Maybe SARS2 spooked the flu virus away at Halloween.