There has been a good deal of talk lately about what would happen if Trump loses the election but refuses to leave.  This is a pretty good explanation:

Among the many things to worry about these days, this isn’t one of them.

I think the real question is, if he loses, what damage can he do to the government before he leaves?

I saw an interview with a retired General who was put in charge of wargaming this scenario. He was shocked at what the Team Red representatives participating in this wargame came up with to really screw the country.

I’ve been buying VIX calls in December in anticipation of the drama that will be coming post-election no matter which way it goes.

The more relevant question is wether the democrats (and their shock troops) will accept the democratic result; they had trouble with this last election.

A common strategy is to accuse the other side of doing exactly what you yourself plan to do.  In this case, HRC virtually ordered Joe Biden not to concede under any circumstances if he lost the election.  Presumably the game plan is to have the Team Blue cronies in the Deep State take action to make sure Biden gets installed regardless of how the actual vote count goes.

They really are desperate.  I don’t really understand why they are prepared to destroy the republic just to win this one election.  I mean, if we survived Bush II, we can survive anything.  But I guess free and fair elections aren’t something to be tolerated any longer.  This one is life and death.

Not for Trump – for the folks on the Team Blue side.  Clock is ticking.  Perhaps Clinesmith is cooperating…

That says it all, right there. Why would anyone make such a statement? Hmm.

The Democrat Kunstler sums it up eloquently.

Well, dude, the war gaming was NOT made up of Republicans, except a very few “never Trumpers” (e.g., Bill Kristol). What the “Red Team” was made up of were Hilary-Barak leftovers and pro-Biden establishmentarians. What do you think they’d come up with?

I expect we’ll get a case like the Gore v. Bush Florida recount debacle, in some swing state, wherein the Democrats keep refusing to concede and demand recount after recount until, somehow, it turns out mistakes were made and Biden did win after all. That’s a now well-rehearsed Blue Team tactic. But Lord help Trump if he demands even one recount! Biden doing it will be cast as only the noble desire that every vote count, ’cause ‘Merica! Trump doing it will be cast – as is already being suggested – as refusing to accept the election results which, it is already being intimated, could only mean he’s an autocrat who refuses to leave the Oval Office, ’cause Dictator!

In other words, the highly partisan design of the exercise itself, as well as political orientation of the actors in these four scenarios, is blatant.

On the basis of those open Trump-haters hypothesizing what Trump and his supporters would do, a set of plans to counteract right-wing subversive and contra-Constitutional behaviors are advocated for adoption by all freedom-loving activists and leaders – all assumed in passim to be Democrats or progressives. Curiously, those counteractions are themselves anti-Constitutional (like insisting on using the popular vote rather than the electoral college system to identify the winner), and subversive (like calling for prolonged street occupations; or calling for California, Oregon, and Washington to secede if Biden is not declared the winner; or hypothesizing a Biden concession only on the grounds that California will be divided into 5 states, and DC and Puerto Rico will be granted statehood – the effect of which would be to give Democrats a future unbreakable dominance in Congress and in presidential elections).

The document also explicitly calls for social media platforms to identify reliable sources of information in advance, who will be in a trusted position to mediate misinformation and provide “facts.” At the same time, they are encouraged to de-platform those who provide misinformation or offer conspiracy theories. In the context of the base assumption of the TIP document that the bad actors are the Trump supporters (white supremacists and racists, remember), the recommendations merely advocate for what is already happening on social media and Google – only now, with the justification that they’re protecting American democracy and fair play from evil Trump and his racist, xenophobic, Hitlerian supporters.

Throughout the document there is absolutely no effort to include counter-narratives, actual Republican concerns, or alternative interpretations of data, nor to address even the potential for Democrat party and supporter misbehavior originating from its own venal pursuits while, as said, only venal and convention-defying behavior is posited for Trump and his supporters. In itself, that complete absence of balance screams to any alert reader that the “integrity” element of the “Transition Integrity Project” and its report is wholly absent.

The one concession made to the possibility of Biden-DNC-Democrat lay people misbehaving is the hypothesis that, in the face of persistent, trying Trump misbehaviors, the Biden team might be tempted to take extra-legal and immoral action, too. But that would be in a misguided attempt to defend itself from the lies and unjust attacks of the Trump team. There simply are no other conditions under which the TIP gamers can imagine Team Blue misbehaving in the slightest.

Clearly, the document wants readers to conclude that the Biden team would never initiate immoral behavior, nor would Biden supporters act unlawfully unless provoked into doing so by Trump’s or his supporters’ persistent goading and reckless disregard for norms of law, electoral custom, and common decency.

The net effect of this document and the dutiful reports of its “bipartisan” finding by MSM is to set the stage so that any effort made by Mr. Trump, the GOP, or Republican leaning media, government officials, and lay Americans to object to or put a stop to any chicanery engaged in by Mr. Biden, the DNC, or Democrat-Progressive leaning media, government officials, and lay Americans can be cast as attempting to thwart democratic processes, and hang onto power un-Constitutionally. And social media and search engines will do their best to prevent the ire of lay people from being expressed, or pro-Trump articles, reports and events from being placed before the uncertain public. One side only will be heard.

The pre-positioned propaganda set pieces are already staged. The talking heads are already doing their part to insert the appropriate ideas into the minds of the populace.

As I say, there is no “integrity” in the Transition Integrity Project. As designed it serves only one purpose: to obscure and justify all manner of skullduggery and thuggery by Team Biden and his street-level organizers and minions, while kneecapping any response by Team Trump. Get ready, ’cause it is coming.

Anybody “hoping” for a military coup?

Kind of serious question.   I realized around August of 2016 that I didn’t “hope” for either Hillary or Trump to win because I didn’t want to feel moral responsibility for whatever happened next.

So this time you have the Democrats clearly attempting to orchestrate a fraudulent mail in voting campaign to which the President has responded by suggesting voting for him multiple times with that very system.

So just as a thought experiment, on Nov 4, when either Biden refuses to concede or Trump signals his plans to stay on (or both) what would you hope to see happen next?

The Transition Integrity Project mentioned above does seem to indicate a Color Revolution is planned for America if Trump wins.

Whats the best “real world” outcome to root for there? 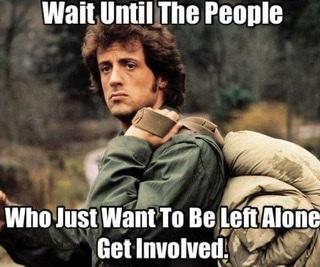 Right now, millions of people are watching and hoping that the rule of law will finally prevail. But if they lose that hope, watch out!

This is going to get fun – one way or another…. election or not.

“So just as a thought experiment, on Nov 4, when either Biden refuses to concede or Trump signals his plans to stay on (or both) what would you hope to see happen next?

I think Trump should accept Biden’s invitation to go behind the woodshed. Trump would have the best right hook…..like “no other right hook” the best hook ever in the history of right hooks…………but …….on the other hand, Biden probably couldn’t remember how to get to the woodshed.

I alternate between laughing at the absurdity of it all  ……and crying for my lost country.