Folks I have no idea if this is real but being an old RN it caught my attention since it appears to be planning some rather nasty public health measures in the UK.

These are screen shots from someone’s desktop and there are 3 pages…but looks like perhaps there should be a 4th to discuss the Covid variants.  IF anything in this is true…I figured ya’ll would know. 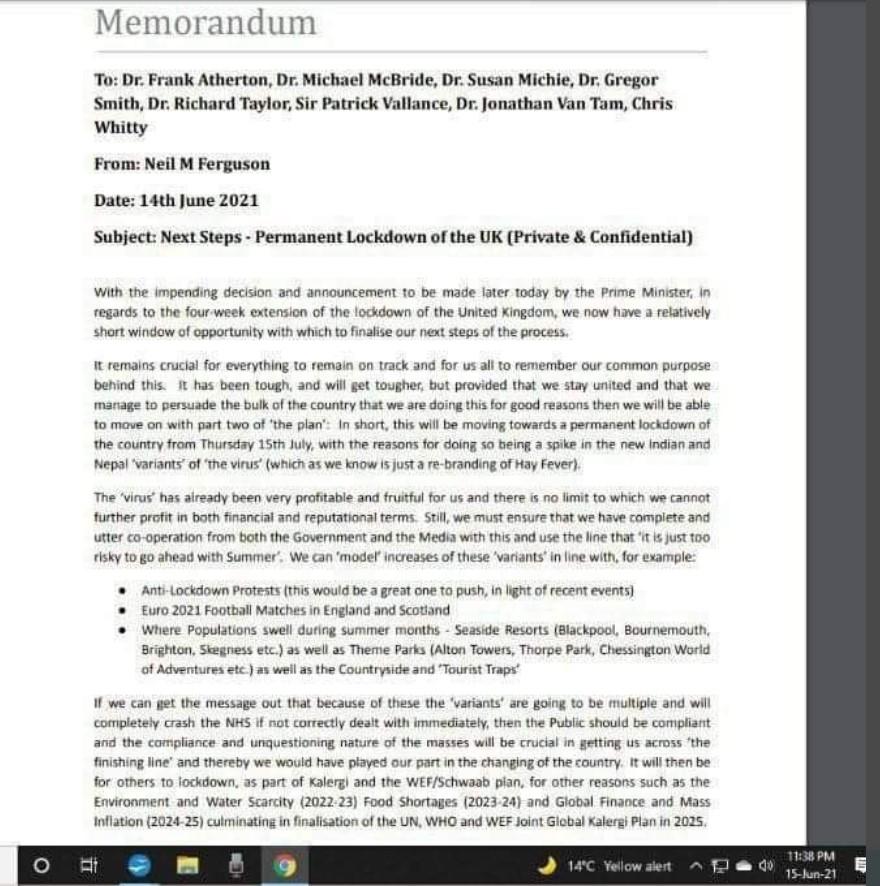 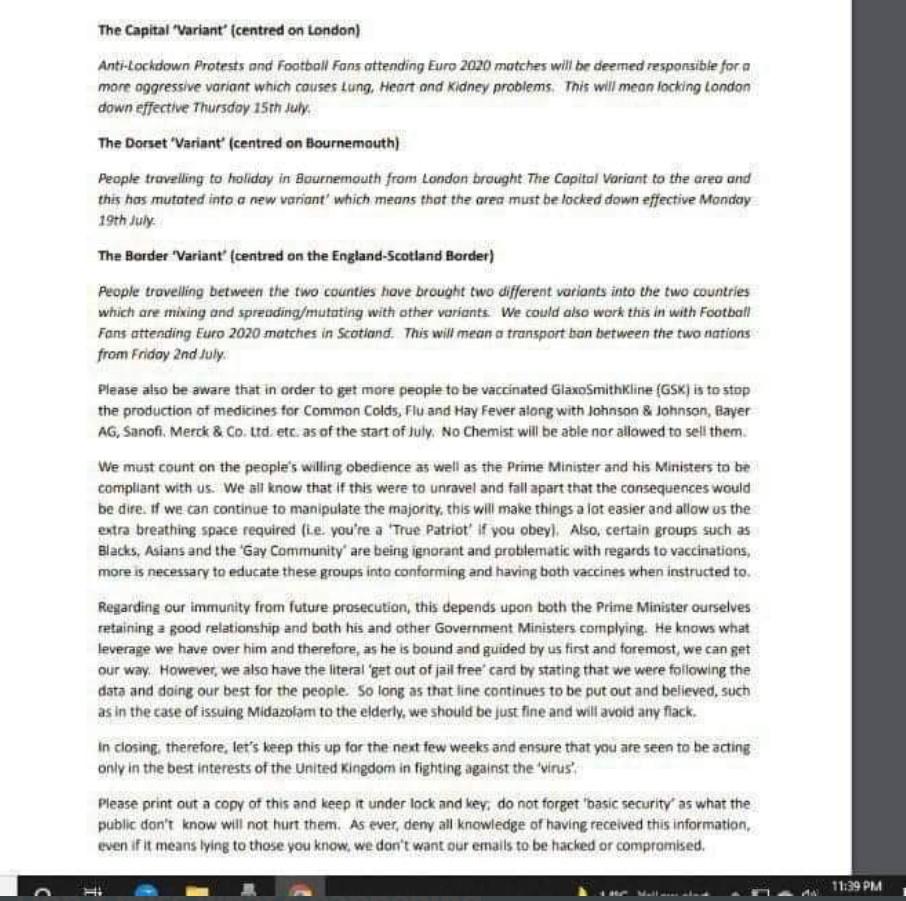 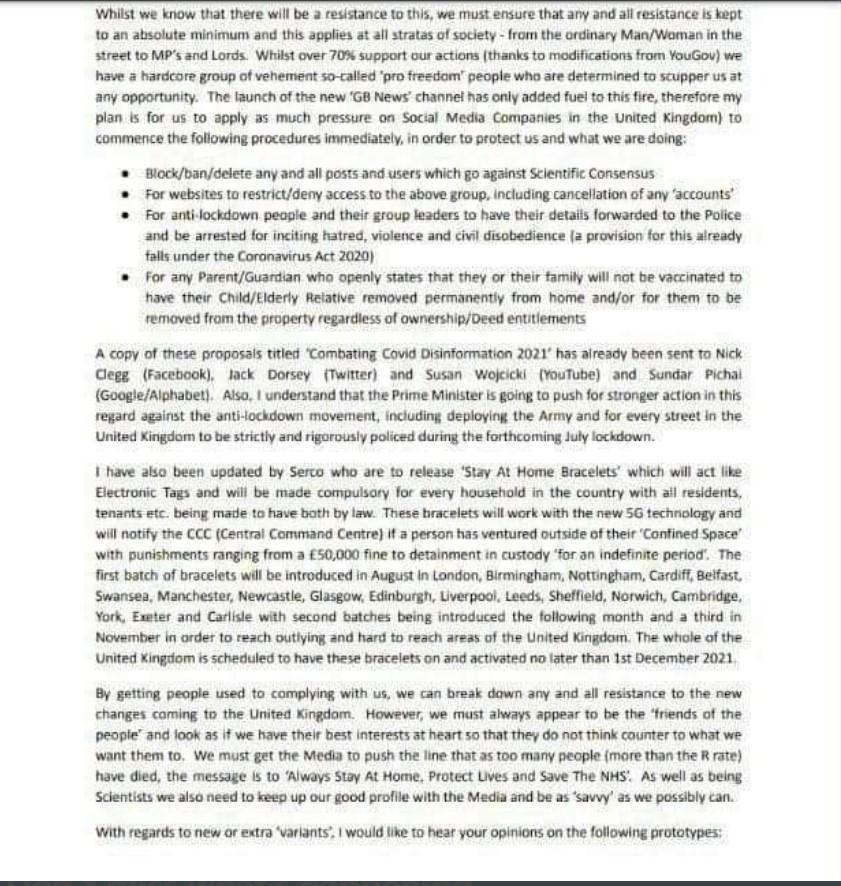 It shrieks “I’m a fake” to me, although I’ve no doubt that much of it accurately reflects their agenda.

I saw the same thing this morning and wondered about it… unfortunately there is no way to validate its authenticity.There seems to be an awful lot of detail that I do not imagine would ever be put in an email.

Who knows, as with Susan, I do not doubt it reflects the agenda. All it can do is provide food for thought or fear (take you pick).

It’s just too lurid for words. It sets out almost all of the suspicions people have had regarding the agenda of TPTB, in one handy place and somehow leaked to the public.IMO anything of this scope would be ultra-carefully hidden.

An easy test is to wait until Friday 2/7 when a travel ban between England and Scotland is to commence.

This is absolutely bogus.

If you have ever read internal documents exposed by whistleblowers then you know that government officials never admit what they are doing in terms as blatant as this. Usually, in broad terms, they repeat the lies told to the public. You always have to compare different documents, watch what they are really doing (in contradistinction to what they say they are doing), piece together inadvertent admissions, read between the lines as to ambiguous statements and then connect the dots to understand what it all means.

This document might actually have been put together by British Intelligence as a trap. They might have deliberately leaked it to the public so that later (if it becomes widely quoted) it can be “debunked” by pointing out some obvious flaw (something in the document which is impossible but which would be unknown to the casual reader.)

At that point, when that obvious flaw is exposed, the media will go wild showing “just how crazy these conspiracy theorists are.”

This is either the creation of a prankster or deliberate disinformation set up as a trap.

1. A grammatical mistake: stratas instead of strata. Strata is the plural of stratum, and is spelled strata even when used in the plural. Just like data/datum. I can’t see any high-level British bureaucrat making such an egregious error.

2. A spelling mistake: Combating instead of Combatting. I’m out of touch with modern British education and such Americanisms may well have crept into common usage, but even so I think that the kind of people who would be writing such a document would use the British spelling.

But the whole thing does make a good summary sheet!

Seems fake, just to try to discredit those who spread it most likely. It definitely fits the current optics, but as previous posters have said, its too blunt and blatant to be legitimate. Most people committing atrocities have to filter the language to dehumanize the people as data points, otherwise their consciences get in the way. I believe its a fake.