raised by my depression era G-parents we’ve always lived a “prepped” life, however, this am. the windshield wiper blade,drivers side,decompensated on my way into the office. I got soaked putting the passenger side where it would be useful.  robie

Sager, hat tip to the Giants. How’s this for resiliency: GoooOOO Lions!

Seriously now, I have been glued to this storm, I wish all well, and have mentally gone through all possible scenario’s and the preps are done, duplicated and backed up. The greatest comfort I can think of is having installed a tri-fuel carburetor to my whole house generator. Gasoline, propane and natural gas can be used, are stored, and the system is portable.

Google has posted an interactive map with all sorts of data on Hurriance Sandy. The red pins on the map represent Red Cross shelters where you/loved ones can ride out the storm if your current location becomes endangered.

Click on the map to zoom in/pull up information about a location: 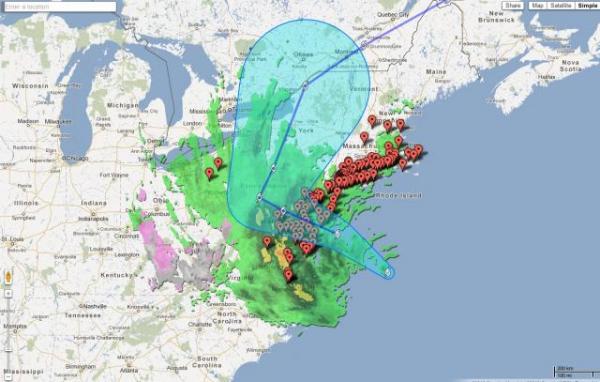 The map also has a toggle that shows where the worst of the storm surge is expected to take place. If you live in a coastal area, play it safe.

Don’t wait until things look bad to leave. If you wait to do so, beyond your own life, you end up endangering those who may be called in to help you (I am having this issue right now with an elderly family member who is resisting leaving her seaside home).

So far so good…just had 1 quick power outage, power came right back on. Definitely not as bad as Irene last year, so far. I think it has a lot to do with the lack of leaves on the trees – they are all blowing around my backyard

.
I think landfall has been moved up to 5PM now. Since the storm has turned towards New Jersey and is probably at it’s closest to point to me in West-Central CT, it may not get much worse than this…fingers crossed.

Very responsible Adam, and the best this community can offer. I pray your family member is moved to safety.

I can help (financially), would like to help, and if I can do this directly just let me know. Are there any PP members directly volunteering where I might be able to send a donation?

In the final analysis, the Great Lakes may be affected as badly as anywhere.  I mentioned earlier a friend who lives on Lake Ontario.  He has talked to a lot of people up there who are lifetime residents.  None remember anything like the confluence of a tropical hurricane and a system coming in from the west.  I did some searching online and found a study done by the Corps of Engineers around 1990 looking at historical weather events on L. Ontario.  The summary mentioned a number of storm types, the directions they came from and the seasons when these types of storms occurred.  There was nothing indicating a storm like this had occurred in the historical record.  Then I called a friend who works for the Corps and has access to buoy readings.  Wave heights on Ontario are now about 5 ft, but forecasts are predicting over 20 ft waves some time tonight.  There are supposed to be 25 ft waves at the south end of Lake Michigan (Chicago).  The houses along the stretch of shoreline where friend #1 lives are generally no more than 10 ft above the waterline.

The bottom line is that the Great Lakes may be very unprepared for what is currently brewing.  Give a thought to friends and relatives who live near the Lakes, particularly the south sides/ends of those lakes.

We’re having our first 30+ mph gusts here in central MA.  I’ve already had a power flicker event so I am not terribly sanguine about our chances of keeping it on over the next 48 hours (!!) while the storm is going to chug around in our region.

Yet another Halloween shaped by mother nature, last year’s being affected by the freak snowstorm that took our power for 6 days.

I topped off our gasoline jugs because I do not like how Sandy is pointed right at a significant portion of our east coast refining capacity.  All that has to happen to create real shortages around here is for one of those refineries to go off line for a couple of weeks.

Given that they are already going to be (at best) essentially off line for a few days because they went into preventative shut down in anticipation, I think fuel stands a decent chance of going in short supply as a result of this storm.

The early pictures out of NJ and lower NYC already tell a tale of significant flooding and damage and the main portion of the storm has yet to arrive right at high tide.  I am certainly glad I am not 100% reliant on the NYC subway system as that might be offline for a while if it gets flooded as now seems likely.

I do tend to take such storms with a grain of salt because of all the hoopla that the media likes to generate, but this one…I don’t know…it’s that central pressure of only 940 mb … that’s really, really low. I know she’s not very well formed, which is an oddity given that central pressure, but I think the chance of organizing and strengthening is there given the fuel she’s got and the low pressure reading.

At any rate, I will post this while I can using my main systems, but am prepared to have to switch over to my cell phone and laptop backup system.  After that I have to resort to my local wifi coffee shop ‘system’ and if that’s not working the library in the next large town system.  🙂

Sitting in my office in southeastern New England watching through the patio doors as the rain and wind pummel the trees below and on the ridge across the valley.  Nothing too bad so far, just a little more intense than a normal fall or spirng rain noreaster. Schools are canceled and most everything is shut down.  Very few calls or emails all day. Lights have flickered several times but so far so good.  We are worried after last year, living through Irene, which didn’t come withing 150 miles of here, but left downed trees, damaged builidngs and no electricity for a week.

Left our retreat in the northern New England woods yesterday to return to town home to be with kids, grandkids, elderly parents and to batten down the hatches.  Place up there should be out of range.  It felt strange looking for flashlights and going to the emptied market last night.  In the woods we are all set for these events.  Wood stove heats whole house (and can be used to cook) (Three cords piled up behind house, another cord on porch.)  Propane cook stove for meals and hot water.  Dug well and buckets provide water when drilled well’s pump goes down.  Battery backup to run computer, small lights,cd and dvd players, or to charge cell phones (has hand crank for use if stored charge runs down.) Enough canned and boxed food to last a week or two without problem.  When we were going over our list of “to do” things for final preparations this morning I told my wife that next event we should stay up north where we are good to go when disaster hits.

…where I used to work as a safety manager, a tower crane is dangling off of the soon-to-be tallest residential building in Manhattan – 157 West 57th Street. Imagine trying to deal with a partially collapsed crane in this weather. 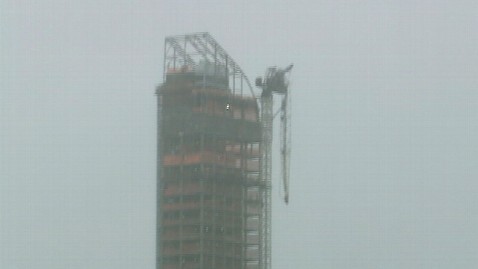 New York City officials have order evacuation of the upper floors of several nearby buildings. Those things can be lethal. Click on the link for another photo and the full story.

6:30 pm.  So far, so good in Philly.  Not as much rain (yet) as I expected.  Didn’t like the way the tree in our sidewalk out front was flapping against the power line that comes into the house, so we did some trimming this morning in the 25 mph gusts.  Problem solved.  Neighbor’s massive maple out back (overhanging our deck and rear of house) doesn’t seem to mind the wind at all.  Wind is 32 mph steady with gusts above 40 mph.  Electrical power hasn’t even flickered.  City was closed today and will be so again tomorrow.

“May the odds be ever in your favor.”