So if you saw Steve on the Weinstein (Dark Horse) video the other day, you’ll get the sense that he’s…a little bit fired up.

Turns out Steve went to MIT.  I don’t know any dumb people who went to MIT.  Anyhow, he wrote up some snarky-yet-deadly-serious “conversation starters” which Trial Site News published.  Worth reading:

I can’t guarantee that we are “on the right side of history”, but I suspect there’s a metric shitload of posts, tweets, and suppression acts (especially from Google, Facebook, and Twitter) that “won’t age well.”

And – as a certain member (with a keen understanding of just how history tends to rhyme) has suggested – years from now when the truth comes out, all the folks (whose salaries we pay!) at CDC, FDA, and WHO will all try to claim – just like the Nazis did at Nuremberg – they were “just following orders”, or “they didn’t know.”

Does that sort of thing generally work out?  Do you really want to be one of them?  Explaining to your friends, “no, I really didn’t know!”  It will be more-than-embarrassing at the holidays.  You might also be spending time making big rocks into little rocks at Leavenworth.

Just look at Fauci right now.  15 months ago, he was Pope Fauci the Infallible.  Now?  Under fire.  His only defense: “Attacking ME is Attacking SCIENCE ITSELF!”  Yep.  That’s a winning line.

And now we have 3 standup people at FDA who have resigned in protest at FDA’s latest horrific move – approving a $56k substance (per year!) that has not been shown to actually work!!

On the panel, 10 of 11 voted NOT to approve this drug – and yet FDA approved it anyway!  Might be interesting to do a FOIA request on the emails surrounding this particular decision.

The standup people who resigned:

Step by step.  The Oligarchy are slowly impaling themselves due to sheer overreach.

We are not alone.  Good people are everywhere.  We just need to unite.

And maybe some more FOIA requests would help too.  🙂

Step by step. The Oligarchy are slowly impaling themselves due to sheer overreach.

We are not alone. Good people are everywhere. We just need to unite.

At the end of the 3+ hr podcast Bret pushes his subjects to focus on solutions.  Solutions to the capture of government agencies, the mass media, the journal peer review process, and much of academia by the PharmaFascists (my term).  We have to take this as good news that a public intellectual like Bret Weinstein is now able to move on from talking about defining the problem, and arguing about whether it exists or not, to talking about solutions since the problem has become so self-evident.

I have not watched it all but so far they are all still totally stuck in the faulse paradigm of Germ theory. They talk as if SarsCov2 is some big nasty bug lurking around waiting to pounce on ANY unsuspecting huma, infected them and kill them. This represents a fundamental misunderstanding of viruses.

Herd immunity does not mean the end of a virus, they are correct it will be around forever just like all the others.

Covid-19 kills predominantly the sick and the old people. Less than 5% of all who have died did not have severe pre-existing health condition.

This virus and many many other even more ugly viruses will continue to kill off the population as long as we continue to keep getting more and more unhealthy, and we continue to saturate our planet with chemicals.

25000 people die every day from chemicals in the environment;

We need to re-educate the population of the planet on what it means to be a living entity on this planet. There are 50 ways we are rapidly rushing to total extinction of all life on the planet because we are clueless.

But hey… that doesn’t mean we can’t still make a ton of money before it happens.

This is it. That’s the post. Yes, Germany’s Joe Blogs did insist they didn’t know. Anyone who’d claimed otherwise back in the day got a one-way to Poland.

This is a great thread.   In the DarkHorse podcast Steve’s frustration with the entire covid mess was evident.   No doubt all here can identify with his being disregarded, disrespected, and being considered a conspiracy nut….for trying to save lives.

In your post Dave, this paragraph:  “And – as a certain member (with a keen understanding of just how history tends to rhyme) has suggested – years from now when the truth comes out, all the folks (whose salaries we pay!) at CDC, FDA, and WHO will all try to claim – just like the Nazis did at Nuremberg – they were “just following orders”, or “they didn’t know.”

really stands out.  Physicians and other medical practitioners who knew or should have known and watched people die and suffer needlessly will have to live with it the rest of their lives.    In far too many instances the Hippocratic oath has become the hypocritic oath.   Health practitioners that have sold their souls for the almighty dollar will pay hell.   We have a retired nurse friend who volunteered her time to give the “jabs” her son is a doctor.   When I told them about ivermectin many month’s ago they brushed me off.  How will she and her son feel if the vaccines cause widespread damage?   Month’s ago I tried to organize a community discussion on Covid at one of the a local Church’s only to be completely shrugged off.

While the true overall agenda may differ, there is certainly adherence to Alinsky’s eight steps from democracy to socialist society.   We may already be there.

” There are 8 levels of control that must be obtained before you are able to create a socialist/communist State. The first is the most important.”

1. Healthcare: “Control Healthcare and you control the People”

2 Poverty: Increase the Poverty level as high as possible.” Poor People are easier to control and will not fight back if the government is providing everything for them to live.

3. Debt: Increase the National Debt to an unsustainable level.” That way you are able to increase Taxes, and this will produce more Poverty.

4. Gun Control: Remove the ability to defend themselves from the Government. That way you are able to create a Police State – total local control.

5. Welfare: Take control of every aspect of their lives (Food, Livestock, Housing, and Income).

7. Religion: Remove faith in God from the Government and Schools.

8. Class Warfare: Divide the People into the Wealthy against the Poor. Racially divide. This will cause more discontent and it will be easier to Tax the Wealthy with full support of the voting Poor.

Taxation without representation…..does it sound familiar?  What they can’t buy they will take for inability to pay taxes.  Yes it’s likely good to keep some reserve for taxes….it’s coming.   It could be that inflation will devalue the dollar to the point that few will be able to pay their taxes.   I need to go pick some veggies in my garden.  This pic is a month old, mater’s, taters, okra, corn squash’s eggplant, etc. ready.  mmm good 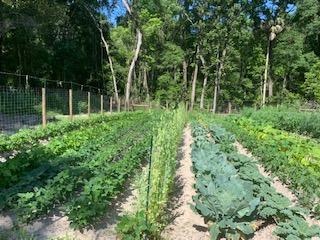 Can’t wait to get the pond in.

Step by step.  The Oligarchy are slowly impaling themselves due to sheer overreach.

We are not alone.  Good people are everywhere.  We just need to unite.

We have SO much more to do.  So few people in the general public are well informed enough to make the politicians sweat.  One one side they have a pile of campaign $ from Pharma, on the other side are unaware voters  due to censorship and disinformation.