Special Army Unit Ready To Be Deployed on American Soil

Hmmmmm this is interesting!!!!

In October of this year, one month prior to the November midterm elections, a special army unit known as ‘Consequence Management Response Force’ will be ready for deployment on American soil if so ordered by the President.
(AP Photo/David Longstreath).
The special force, which is the new name being given to the 1st Brigade Combat Team of the 3rd Infantry, has been training at Fort Stewart, Georgia and is composed of 80,000 troops.

The criminal elite are gonna need that protection in the coming decade.

I’ll shine a different light on this…..

Here in the Tidewater area of Virginia we have over 200,000 men and women of the Army, Navy, Air Force, Marines and Coast Guard already stationed.

They are my neighbors, co-workers and friends.

I sit next to them at Mass (okay, not exactly next to them since I play guitar in the choir and we sit up front).

Their children went to school with my children.  We served on the same PTA committees together (FWIW I will NEVER ever volunteer to be a PTA President again in my life).

They have pretty much the same concerns that I do – their family’s welfare and safety and the opportunity to raise their kids.

So when the “criminal elite” need protection I seriously doubt I will be looking across a line at these troops as they will most likely be standing next to me.

And when the next hurricane smacks Virginia Beach I’ll probably be happy to see my neighbors show up to help.

But of course, I’ve been conditioned to not make molehills out of mountains that were made out of molehills.

AIn’t that the truth xraymike!

When you start to think about it- Everything we have been told in our lives istainted with propoganda. Many generations from now they will look back at us as the “sleeping society”.

IMHO- we live in an up-side-down world – no wonder things seem to be “falling apart” – nothing is what it is meant to be. And any present system you look into and “follow the money” – down the rabbit hole you go. What a crazy mixed up world. Hopefully, 87 years from now, we will be viewed as the sleepers who finally woke up and our children and grandchildren can forgive us for not knowing better.

I was 20 years old when this happened. I can shine a light on the America I grew up with and continue to live with today. To think that American troops will not shoot at American citizens is a fantasy. The Military Industrial Complex is a nation unto itself beholden only to the international banking cartel. and the corporations it finances.

It will be extremely easy to demonize anyone  to the point that scared, ignorant and heavily armed US soldiers will follow orders and shoot their fellow citizens. 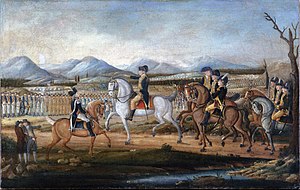 George Washington reviews the troops near Fort Cumberland, Maryland, before their march to suppress the Whiskey Rebellion in western Pennsylvania.

The Whiskey Rebellion, less commonly known as the Whiskey Insurrection, was a resistance movement in the western frontier of the United States in the 1790s, during the presidency of George Washington. The conflict was rooted in the dissatisfaction in western counties with various policies of the eastern-based national government. The name of the uprising comes from the Whiskey Act of 1791, an excise tax on whiskeythat was a central grievance of the westerners. The tax was a part of treasury secretary Alexander Hamilton‘s program to centralize and fund the national debt.

The tax proved to be unpopular among small farmers in the western states, where government officials were prevented through violence and intimidation from collecting the tax. Resistance came to a climax in July 1794, when a U.S. marshal arrived inwestern Pennsylvania to serve writs to distillers who had not paid the excise. The alarm was raised, and more than 500 armed Pennsylvanians attacked the fortified home of tax inspector General John Neville. The Washington administration responded by sending peace commissioners to western Pennsylvania to negotiate with the rebels, while at the same time raising a force of militia to suppress the violence. The insurrection collapsed before the arrival of the army; about 20 people were arrested, but all were later acquitted or pardoned.

The Whiskey Rebellion demonstrated that the new national government had the willingness and ability to suppress violent resistance to its laws. The whiskey excise remained difficult to collect, however. The events contributed to the formation of political parties in the United States, a process already underway. The whiskey tax was repealed after Thomas Jefferson‘s Democratic-Republican Party, which opposed Hamilton’s Federalist Party, came to power in 1800.

The New York Draft Riots (July 13 to July 16, 1863; known at the time as Draft Week[2]) were violent disturbances in New York City that were the culmination of discontent with new laws passed by Congress to draft men to fight in the ongoingAmerican Civil War. The riots were the largest civil insurrection in American history apart from the Civil War itself.[3] President Abraham Lincoln sent several regiments of militia and volunteer troops to control the city. Although not the majority, many of those arrested had Irish names, according to the lists compiled by Adrian Cook in hisArmies of the Streets. The rioters were overwhelmingly working class men, resentful because they believed the draft unfairly affected them while sparing wealthier men, who could afford to pay a $300.00 Commutation Fee to exclude themselves from its reach.

Initially intended to express anger at the draft, the protests turned ugly and degraded into “a virtual racial pogrom, with uncounted numbers of blacks murdered on the streets”. The conditions in the city were such that Major General John E. Wool stated on July 16, “Martial law ought to be proclaimed, but I have not a sufficient force to enforce it.”[4] The military suppressed the mob using artillery and fixed bayonets, but not before numerous buildings were ransacked or destroyed, including many homes and an orphanage for black children.

The self-named Bonus Expeditionary Force was an assemblage of some 43,000 marchers—17,000 World War I veterans, their families, and affiliated groups, who protested in Washington, D.C., in spring and summer of 1932. Called the Bonus March by the news media, the Bonus Marchers were more popularly known as theBonus Army. It was led by Walter W. Waters, a former Army sergeant. The veterans were encouraged in their demand for immediate cash-payment redemption of their service certificates by retired U.S.M.C. Maj. Gen. Smedley Butler, one of the most popular military figures of the time.

The war veterans, many of whom had been out of work since the beginning of theGreat Depression, sought immediate cash payment of Service Certificates granted to them eight years earlier via the Adjusted Service Certificate Law of 1924. Each Service Certificate, issued to a qualified veteran soldier, bore a face value equal to the soldier’s promised payment, plus compound interest. The problem was that the certificates (like bonds), matured twenty years from the date of original issuance, thus, under extant law, the Service Certificates could not be redeemed until 1945.

On July 28, U.S. Attorney General Mitchell ordered the veterans removed from all government property. Washington police met with resistance, shots were fired and two veterans were killed. President Hoover then ordered the army to clear out the veterans. The infantry and cavalry were supported by six tanks, and commanded by Army Chief of Staff General Douglas MacArthur. Major, later President, Dwight D. Eisenhower was his liaison with Washington police, and Major George Patton led the cavalry. The Bonus Army, their wives and children were driven out with fixed bayonets and adamsite gas, an arsenical vomiting agent, and their shelters and belongings burned. Two more of the veterans, and an unknown number of babies and children, died (accounts range from one to “a number” of casualties).

After Franklin D. Roosevelt’s election, his wife, Eleanor, urged members of the Bonus Army to apply for work with the Works Progress Administration building the Overseas Highway to Key West. Several hundred veterans were later killed in the September 1935 Florida Keys hurricane. Congress overrode a Roosevelt veto in 1936 to give the veterans their bonus 10 years early.

I was 20 years old when this happened. I can shine a light on the America I grew up with and continue to live with today. To think that American troops will not shoot at American citizens is a fantasy. The Military Industrial Complex is a nation unto itself beholden only to the international banking cartel. and the corporations it finances.

It will be extremely easy to demonize anyone  to the point that scared, ignorant and heavily armed US soldiers will follow orders and shoot their fellow citizens.

I’m with you on this V.  I was 19 on that day and learned a lesson I will never forget.  Today the federal government can simply issue a warning about disaffected returning soldiers and gun owners as potential ‘domestic terrorist’ .  The media will give it wide coverage, and those who are not cowed will become targets.  Any active duty soldier who refuses to obey orders to suppress civilians will be labeled a traitor, be court-martialed, and imprisioned as an example.  The other soldiers will quickly fall into line.