Smiling in the gloom

Smiling in the gloom 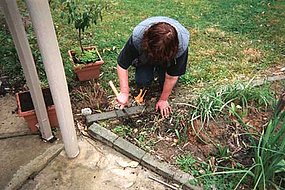 The financial turmoil of the past month has left many looking at ways to save a few dollars. (User submitted: Belinda Fallon)

And the Lord said unto the people of the world,
"Verily, as the globe warms and the waters rise and the uncontrolled
renovation of bathrooms and kitchens continues unabated, I will send a
pestilence.

"This pestilence will be in the form of an Angel, and this Angel
will be called the Angel of Financial Turmoil who will drive out the
greedy company directors, merchant bankers and uncontrolled mortgage
lenders to the land of moderation and frugality.

"And as the supply of credit dries, there will be no more funds
for expensive four wheel drives nor the fuel they consume. The people
of the world will reduce their consumption of all things, and will
begin to walk, ride pushbikes or take public transport. Lo, they will
realise that there is little money for regular restaurant meals or a
diet of take-away food. They will once again grow vegetables, milk the
beast and sustain themselves. The word ‘McDonald’ will once again be a
Scottish clan and obesity will be no more. The people will rise and be
fruitful and while they will not even think about it, they will be
happy."

When the people heard these distressing words, they began to
mourn and no one put on any ornaments. Some however found an
interesting parallel between financial turmoil and the world’s need to
consume less. Some understood the sign and saw that God and Nature had
fought back in the way that people would best understand; that if
reducing consumption to save the planet wouldn’t force change, reducing
consumption because they had no money to do otherwise would have to do.

The financial turmoil of the past month has left many looking at
ways to save a few dollars. My conversations with local restaurant
owners indicate people are eating out less, and when they do, they’re
becoming more price conscious. Radio gardening shows have begun serious
talk-back on growing vegetables and raising chickens. According to
media reports, many are taking to the pushbike to save on fuel and
parking costs.

The world is certainly a different place, and while many mourn the
loss of financial freedom the ‘Angel’ has delivered, others see our
sudden consumption consciousness as the first step in solving the
world’s climate crisis, perhaps a first step they were unable to take
by themselves.

According to the Worldwide Fund for Nature,
if the demands on our planet continue at the same rate, "by the mid
2030s, we’d need the equivalent of two planets to maintain our
lifestyles." For the unconscious spender, this simply means two planets
to renovate. Great! To others, 2030 is very close indeed.

Yet rather than cry in our double brie about all this, there’s a
definite feeling that this change, this new world we’re entering, could
be OK. That in delivering the pestilence, the Angel has created a
non-negotiable set of rules that we must abide by. Carte blanche is
fine, yet limits created through necessity provide a structure and
direction that western society has lacked. Like a tear-away child
needing discipline, western consumers ran away with the ball, really
wanting someone to give chase and read us the riot act so we could feel
safe within fair boundaries.

Capitalism, bless its little heart, has allowed us to do what we
want when we want, yet capitalism spinning out of control creates
individual greed and community breakdown. The ridiculous salaries paid
to some company directors represents capitalism gone mad, especially
when these salaries stand alongside declining literacy, underfunded
hospital systems and an indigenous problem that we should all be
ashamed of.

Yet we’re all responsible. I saw no street protests when the
Macquarie Bank chiefs walked away with their zillions. Words of dissent
in Australian society have been few and far between, and while we were
renovating, many tear-aways ran away with the ball. Indeed, we may have
run and hidden the ball ourselves somewhere in our new kitchen!

The structure, direction and limitation imposed through necessity
need not spell doom and gloom. Throughout history, it’s the ‘difficult’
periods that create community and a sense of pulling together.
Australian ‘mateship’ wasn’t a product of good times and consumer bliss
but the result of hardship and necessary limits.

Whatever the advertisers try and spin us, the lasting memories
aren’t of lying in the sun sipping margaritas, but of the holiday when
we had to overcome something that went drastically wrong. It’s of
having something to work for with creativity and flair, not just having
something to spend. It’s the memory of crusty bread from an old
wood-fired oven, or long seasons without air-conditioning waiting
for the southerly buster. It’s of warm bottled milk capped with cream,
home without renovation and the romance of old things.

And as the people worked, and as they celebrated the Feast of
Weeks with the first fruits of the harvest, they realised what they’d
lost in the years between then and now. They laughed and they sung.
They ate, drunk and danced and the children danced with them. They made
love and made no plans – certainly no renovation plans. And the Lord
saw that although the food was plain, and the wine cleanskin, it was
all very, very good.

i for one enjoy your posts.

i have many friends in  oz and they are preparing.

one thing they mention is that there is not much between oz and china.