Smallpox and Dark Winter in the news

I hesitated between this forum and «Controversial», but this is becoming more and more recurrent in the news cycle so I’m posting here.

They quarantined a lab yesterday because of a smallpox scare: https://www.bizpacreview.com/2021/11/18/worker-accidentally-stumbles-upon-vials-of-smallpox-in-merck-lab-sends-major-red-flags-1164916/

Monkeypox was found in Maryland: https://wjla.com/news/local/monkeypox-case-found-in-maryland-after-resident-returns-from-overseas-trip-pandemic-nigeria-smallpox

Politicians keep referring to a coming «Dark Winter»: Biden https://abcnews.go.com/GMA/News/video/biden-promises-bold-action-covid-ahead-dark-winter-74122899 and Fauci https://www.cbsnews.com/news/covid-vaccine-fauci-dark-winter/ among others

First: Am I the only one feeling like I’m living in a less exciting version of Twelve Monkeys? Am I drawing connections where there aren’t?

Second: How can we prepare for this ? 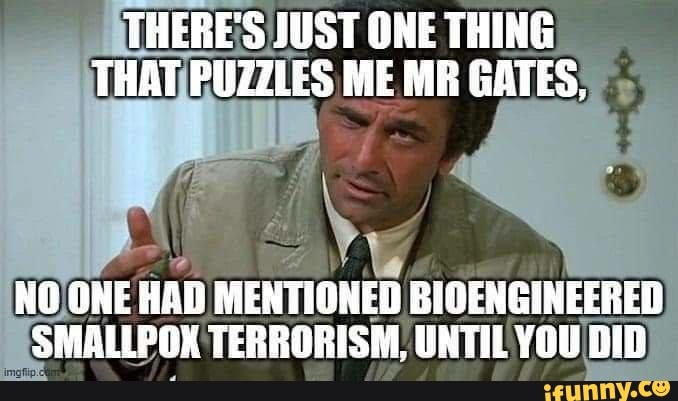 Here’s an idea: go to a travel clinic, say you’re heading to a country where smallpox is a threat, get a dose of the old fashion vaccine before it becomes scarce or before they try to push an mRNA, subscription based version of it on us.

Jim Sinclair, who is related to some of TPTB, has said that they like to give warnings of what they are going to do. I guess it’s all part of the fun.

That is really scary.

Do you want to get really scared.

I read the biography of the guy who used to run the Soviet bioweapons research. He said that they had perfected Ebola pox. Ebola pox was a form of the ebola virus which spread as easily as smallpox (which is very, very easily.)

So you are talking about a virus with about 90% lethality which spreads with the same speed as one of the most contagious diseases out there.

Sorry if this keeps you up at night.

Jim Sinclair, who is related to some of TPTB, has said that they like to give warnings of what they are going to do. I guess it’s all part of the fun.

Thank you for an excellent post with salient references Some Guy From Quebec.  I am just as concerned as you are.  There’s too many indicators in the wind.

Known of two bioweapon avenues of shenanigans for quite some time: dried, aerosolized smallpox being used as carrier molecule and the creation of the ultimate Ebola that looks like rabies under the microscope.

We’re not ready. Not sure there’s any way to prepare.  I’ve never bought the “we eradicated smallpox” slogan as humans are reservoirs and fomites can be clothing or possessions of the infected. Diseases may die down, but they don’t vanish. On visible inspection, supposedly monkeypox is indistinguishable from smallpox. So how would you know it was gone unless you lab test everyone?  Also chickenpox and smallpox cause vesicles…if I’m out in the boonies w no medical text to reference, how do I know the difference?

“We’re the Govt. and we’re here to help you”…you mean like Hurricane Katrina?

USAMRID is not publicly helpful, who knows what they really are doing.  The military revised their smallpox vaccine when dragged into Iraq with the same stuff they used years ago.  No innovations until mid 2000s. Spoke with a scientist in ’90s who said they wouldn’t give them any money to develop new vaccine, just used the dried material off the shelves. He told me, “If you want everything to stop at once, smallpox could do it.”

Supposedly the old stuff is still good, even in very dilute doses. Pasteur instituteur checked their vials in 2004. Why?

Ken Alibek, former Soviet bioweapons scientist, has a book worth reading.  He spoke in ’90s about the breakdown of security at Vector, the USSR sister of CDC, when the economy disintegrated. Freezers with smallpox (supposedly only held at Vector and CDC) went missing, presumably to the highest bidders like Iran and China.

Early on Alibek wrote about the Soviet scientists marrying smallpox as the carrier molecule with things like Ebola.  Up to 5 combos were created. Smallpox is infinitely infectious and debilitating, but not necessarily deadly unless it causes the cytokine storm.. This happens more often in pregnant woman or immunocompromised. Ideally he stated you mixed it with something that was very deadly, but might not be airborne.

Smallpox is infectious in dried form and can be harvested from the pustules of infected. Because of this, it is easily ground to a micronized form that like airborne anthrax, can be carried miles in the wind. This was demonstrated by the 1979 accidental release from a tannery in USSR to a town located very close to military lab.. (Sarc.). )https://www.pbs.org/wgbh/pages/frontline/shows/plague/sverdlovsk/

The exercise Dark Winter was premised on such a release. At something like a sporting event where lots of people were gathered in a confined space, a street washer could spray the aerosol undetected upwind.  When the event concluded, these little vectors would then return home dispersing the weapon exponentially.

Those of us from the 1950’s had to have smallpox vaccination to attend school. That’s the ubiquitous bumpy scar on the left deltoid. It was first from the cowpox virus via calf lymph, then a lab made cousin in the pox family.  It caused a weeping sore that you had to careful dispose of any cleaning materials as it contained live virus. Supposedly if infected with one pox variety, it carries some immunity to others.  It’s based on the now disgraced Dr. Jenner who supposedly discovered he could use cowpox virus for prevention of smallpox by scratching the skin and placing crust from milkmaids’ hands in the wound.

Would this provide life-long immunity ? I don’t think we’ll get a straight answer. There are studies allegedly measuring waning memory cell responses, but I don’t know if that factors in the general immune status or health of the individual.

The Creature from Africa- Metabiota’s Bas Congo Virus, ebola that looks like rabies

I’ve written about this on PP before and the dubious history of the company with ties to DARPA and Goolge, so this will be a short version.

Mysteriously the company Metabiota in 2009 discovered a new virus in the Congo. Never seen before or since. It looks like rabies under the microscope and multiples at a phenomenal rate. Infected only three- boy, girl, adult male nurse. Only the nurse survived. USCSF prof. Dr. Chiu in charge. He invented a computer program to identify viral genomes within hours supposedly from this. Diagnosis could be done accurately and quickly. Funny we never used it with Ebola in USA and certainly not with C-v.

If you were to combine these two premises; extreme infective airborne virus with deadly friend and rapid multiplication-  Voila! the perfect bioweapon. Transmissibility via smallpox, death/ hemorrhaging with Ebola, and rapid neurological breakdown of victim w rabies. No infected person would be able to think clearly to remove themselves from others or resist the sensory overload. Like the rabid animal, they would be hyper acoustic, photophobic, and aggressive. Literally every apocalyptic movie at once: the infected turning into crazed bleeding zombies instantly on the street. Wonder if all those movies were predictive programming?

Some still naively ask,”Why would anyone want to do that? I can’t believe that.” These doubting people have food, shelter, relative freedom and safety.  Ask someone in China’s prison camps about horrors and cruelty. These same complacent people deny it’s possible because that’s what helps them sleep at night.

One or more of the below:

1) Because they’re psychopaths who enjoy destroying and controlling others. It’s their crack.

2) They’re Malthusists who believe the earth is like a giant terrarium that has finite resources. Gotta keep down the numbers or it collapses.Of course “our select group should live regardless of age.”

3) They are misguided environmentalists who believe sunspots are of little to no consequence to the climate, but a plastic cup is murder. Same people don’t realize their cell phone batteries last 100s of years in the dump.

5) They worship Gaia or some other cult. The preservation of a tree is more important to the universe at large than a human as the tree provides ice and recycles CO2, the deadliest molecule known.

6) They are wicked Satan worshipers who are trying to recreate the Garden of Eden themselves. They believe they hold the power over life and death.  They strive towards immortality to cheat God of control. (Even Russel Brand commented on the immortality angle. )https://www.youtube.com/watch?v=-Lcb78d6m70

Good news is this group ignores Noah’s flood or the Tower of Babel as warnings. They’ll shake their fists on the way to Hell or as Marx claimed,”Laugh as I put my hand on the shoulder of those I’ve dragged down with me.” God may be slow to anger, but no one wants to fall under the wrath that’s coming. I know how this will work out in the end, and it won’t be pretty for them.

I got the smallpox vax back in the sixties so I guess I am good to go! A weaponized Ebola and Marburg though worry me. I hope there is someone left to have a conversation with after the Dr. Faustus/Biden Dark Winter.

Saw this as a natural remedy Sarracenia Purpurea

Okay, some of this makes no sense. I think smallpox stopped being in the kids vaccine regimine in 77. That means the people who will be “immune” would be mid 40s and older. Wouldn’t you want to save people who had a long work life ahead of them. Tptb still need chefs and cleaners etc.

Or do they think the sp vax useless?