Silver Squeeze: Is this the BIG ONE?

Is CEF still a repository for silver and gold? I thought I remembered that they actually hold physical to back up the shares.

I looked on my Interactive Brokers account and for PSLV, there are no options available for trading.  That’s a good thing!

CEF was bought out by Sprott a couple of years ago, but still trades under that same symbol.  Similar to PHYS and PSLV, CEF hold a mix of both silver and gold at the Royal Canadian Mint.  As I remember , it’s a 60/40% Au:Ag ratio.

It felt to me like there was a bit of a psychological operation going on whereby anytime during the trading other than about the last 10 minutes SLV seemed like a better place to be than PSLV.  Based on final closing prices, PSLV was up MORE than SLV.

PSLV volume was more than 6X average.. likely a record amount of trading.  Several of the Redditors signaled that they were trading out of SLV and into PSLV, which is great news because Eric Sprott will turn that new demand into actual, physical bar purchases, deepening the shortage that can potentially break the price manipulation.  We are waiting to see what the result of today’s action will be in terms of PSLV additions.

Silver has so much wind behind it’s sails right now, from the Reddit crowd to the macro/commodities picture.  Get a load of the macro context… we all know that money is being printed and there is inflation.. but there’s also this; 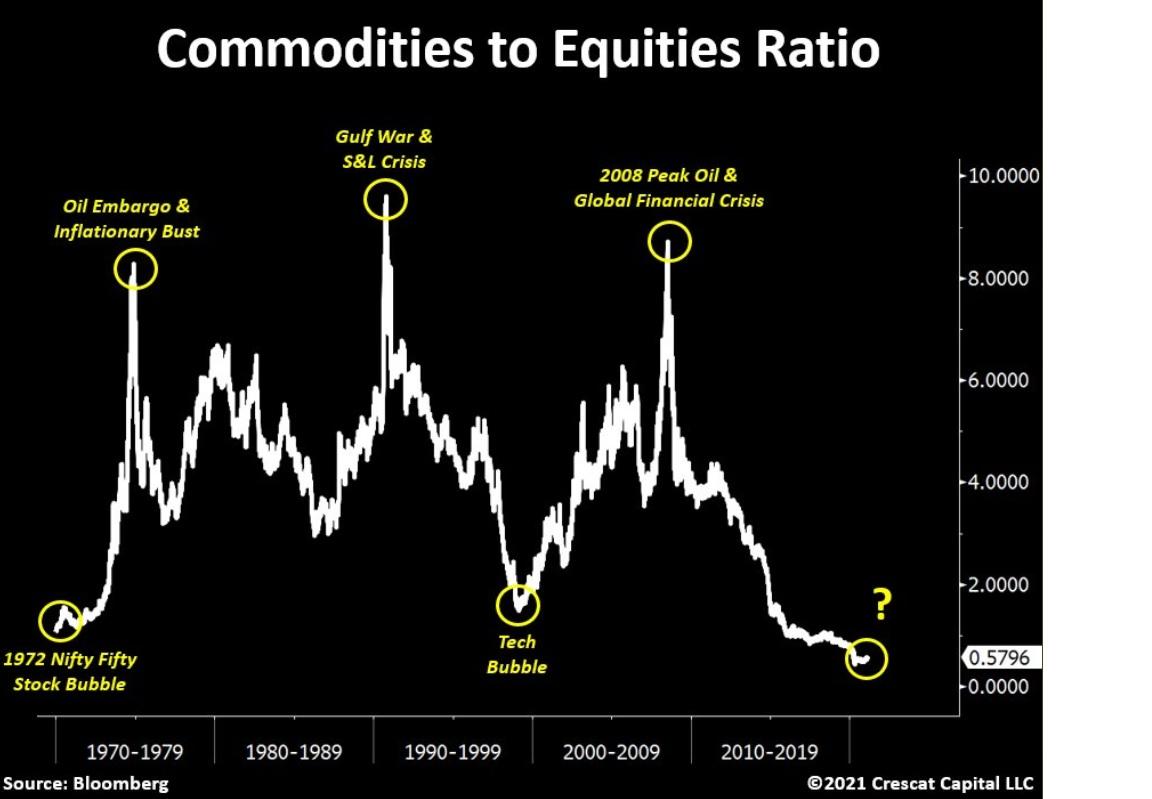 Here is the net effect of the run on PSLV today; 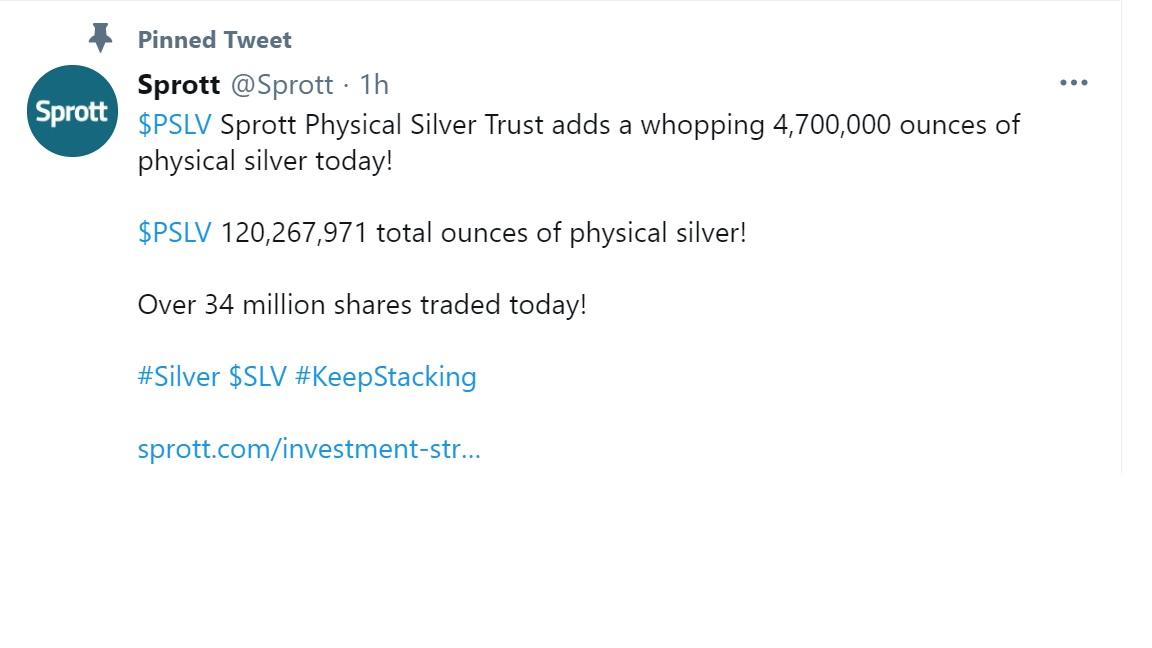 “Here is the net effect of the run on PSLV today;”

LOL, whaddayawannabet paper silver takes a pounding in the overnight paper markets and/or the comex open?

The panel discussion linked above had an interesting theory that a lot of the 1000 ounce bars are not so much “gone” as being set aside for the run that is suspected to be coming.  This will take longer than we would like but should be fun in the end.

Sand  Puppy, in a word Yes. Already done. Silver is priced in the futures market, as is Gold. The futures market dwarfs the physical market – so you can’t say this is “arbitrage”. With until Friday when Silver goes “First Notice Day” there are still 47000 contracts outstanding.

The silver short squeeze is glaringly obvious to anyone paying attention to the data, the evidence is overwhelming, just take a look for yourself, PSLV from wallstreetbets

Only need about 30000 standing for delivery to wipe out the Comex stocks of Silver.

The big industrial buyers are about to get the shock of their lives when they realize that they cannot source their silver.

This feed is a bit wavy in intelligence –  but man is this guy smart!

Stupid me – I forgot to go through all of the posts before posting – thinking SandPuppy was the last to post.

PSLV is a buyer of physical silver which they store in their own warehouse. You can take delivery of your shares – meaning have a paper cerificate in your hands like in the old days. The benefit of that is that the shares are registered in your name, not in the bank’s name that is holding your account shares “in street form”.

Maybe this will not be the big one? The following article explains this process of delivery months. Friday is First Notice Day. There is alot of chatter about what is taking place.

You and I are very much on the same wavelength today regarding phsyical deliveries on the Comex.  I just found this chart, which shows the phase change that started in 2020.

To those who are skeptical;  Look at the historical nature of this shift – can you see it now?  Can you see why the BIG ONE is coming in Silver? 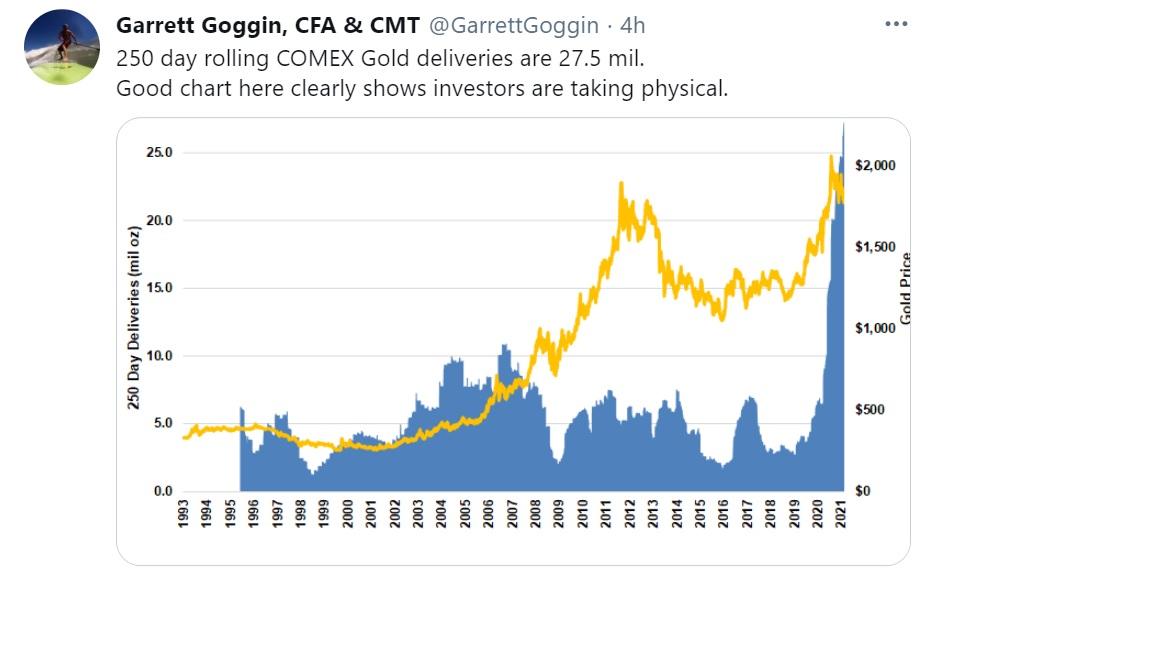