Silver Squeeze: Is this the BIG ONE?

A thread for discussion of signs and indications of a significant breakout of Silver.

The wave of physical demand on Silver continues – listen to Andy Schectman of Miles Franklin describe it earlier today in the video below.  It would be hard to identify a more undervalued asset than Silver.  While I look forward to Dave’s reviews of how this plays out on the Comex in the days ahead.. and there will likely be some kind of fireworks, if not forced cash settlements of contracts.. my purpose here is to really give some head’s up.  If you feel like you missed the Bitcoin wave and wonder what else is out there where you can feel comfortable that you are buying low.. Silver is it.

What I am doing:  Bought more physical Silver for the first time in many years.  Shifting brokerage assets that have been split Gold/Silver to more Silver weighting.

I really hope you’re right, Jim. But after more than a decade of this, I really feel like  Charlie Brown watching Lucy tee the ball up for the umpteenth time.

The game has lasted much longer than I ever imagined it could… but there will be an end to it.  I don’t know for sure that this will be it.. but I am now monitoring on a day-to-day basis, and I am going to start moving more into miners as I further convince myself that this is the BIG ONE.

Lease rates are up in London for the first time in a few years; 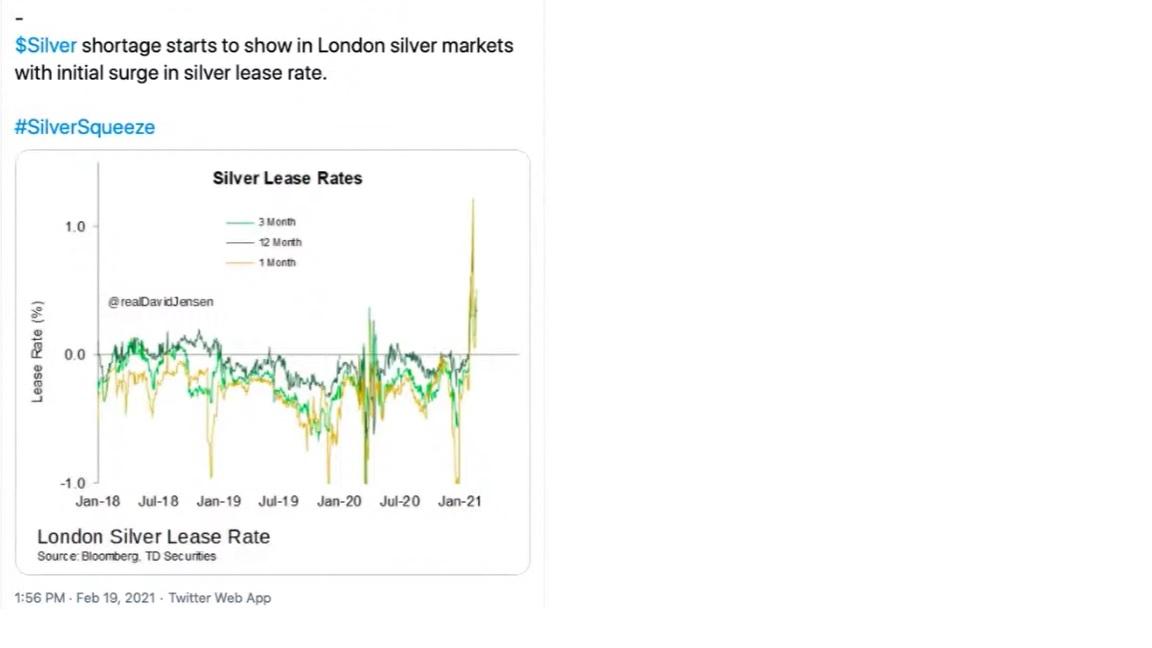 above graphic taken from, and discussed in this video:

I wish you luck and I hope you are right, but I believe the BIG ONE that’s imminent is something entirely from inflation.

Rick is one of the most articulate veterans of the PM industry and puts his own perspective in the likelihood of an actual silver squeeze brought on by retail investors. Hint: he’s doubtful

That interview really raised my opinion of Rick for several reasons:

1) He quickly puts a damper on “Conspiracy Theories” about precious metals being persistently held down as a matter of policy.   I’m not convinced he’s right about that, but it would be so much easier for him to support that view especially in front of the crowd he’s playing to.   Respect.

2)  He often tells you something interesting and important about an industry.  The kind of stuff a retail investor only learns from hard knocks.  Hearing about Uranium’s gyrations was really cool.

3) His description of himself as a bar owner in Vancouver made me realize that I could *never* do what he does.   You don’t (generally) get rich by buying the right mining stock based on Reddit posts of interviews with CEO’s.   Rick is a street smart guy who knows how to talk to people.  Knows how to tell a half drunk bullshitter from a half drunk hungry go-getter.

4) I gotta respect anyone who tells me bad news about my dreams.  His discussion about how there is way more silver out there than people realize may have been the most important part of that interview.   Obviously the price can move up to $50 in a hurry before that silver hits the market, but I really appreciate his supporting evidence.

@TWalker5
I hear ya.  Ive been in the same boat.   I got sucked in when silver was coming off the $50 high and I bought into the idea that the short squeeze was unstoppable.   bought some more at $30 and some more at $20…  At least Im ahead now but its been…. Enlightening seeing how commodities which ought to be the simplest trade there is, is in some ways the most wild-west.  The most stressfull.

I honestly think I have minor brain damage from the experience.   Im having a hard time pulling the trigger on oil and gas shares because deep down I believe they are all gonna get fucked by policy decisions.  The precious metals trade, while profitable hasn’t helped me to become a happier person.

As with the other long suffering PM investors/savers here, I understand the healthy skepticism being expressed here.  Still, I am going to keep looking for signs that this might be the big one, in terms of Silver breaking free from it’s paper price cage.

Here’s what I am sniffing out now based on a lot of Twitter traffic:  There is going to be a run on PSLV tomorrow.  I love that the word is getting out that PSLV is real Silver, while SLV is really just an extension of the banker’s leverage game… people getting their funds funneled into SLV only goes to extend the paper game.  PSLV on the other hand is real Silver, and Eric Sprott is intent on using the closed end trust (it’s not a price tracking fund like SLV) to put continuing pressure on the physical market.  Sprott has bought quite a lot of Silver for the trust in the last few weeks, including a large investment of his own money into shares.

Word about PSLV is spreading like wildfire across the PM twitterverse… and I think it’s meaningful – the message is to own physical; 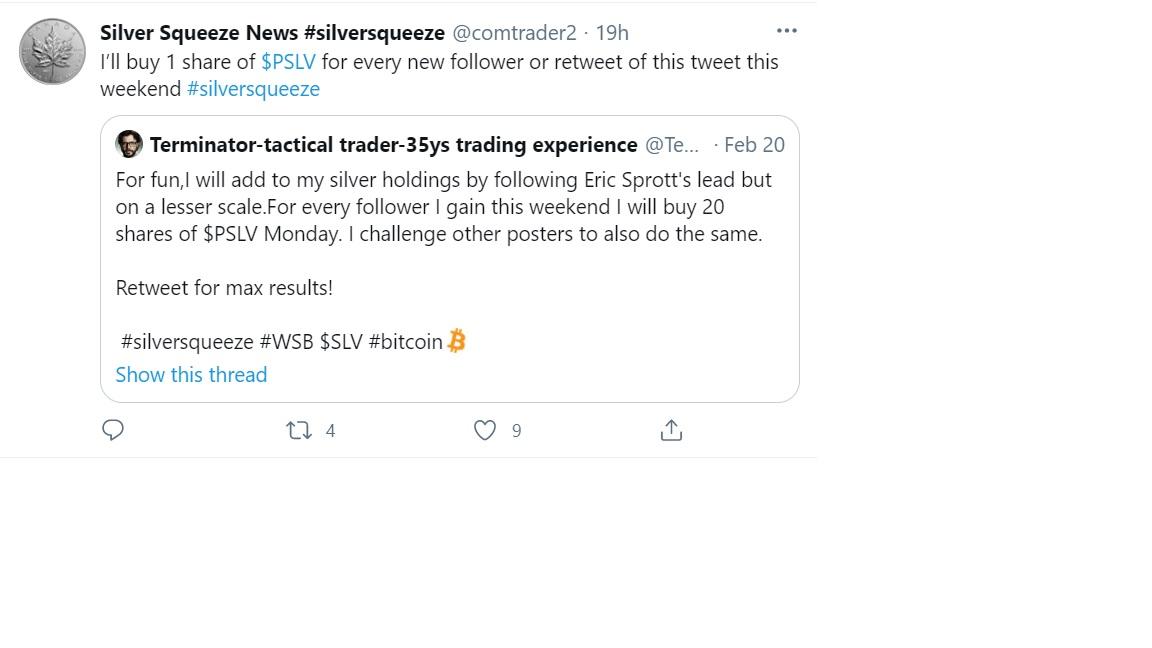 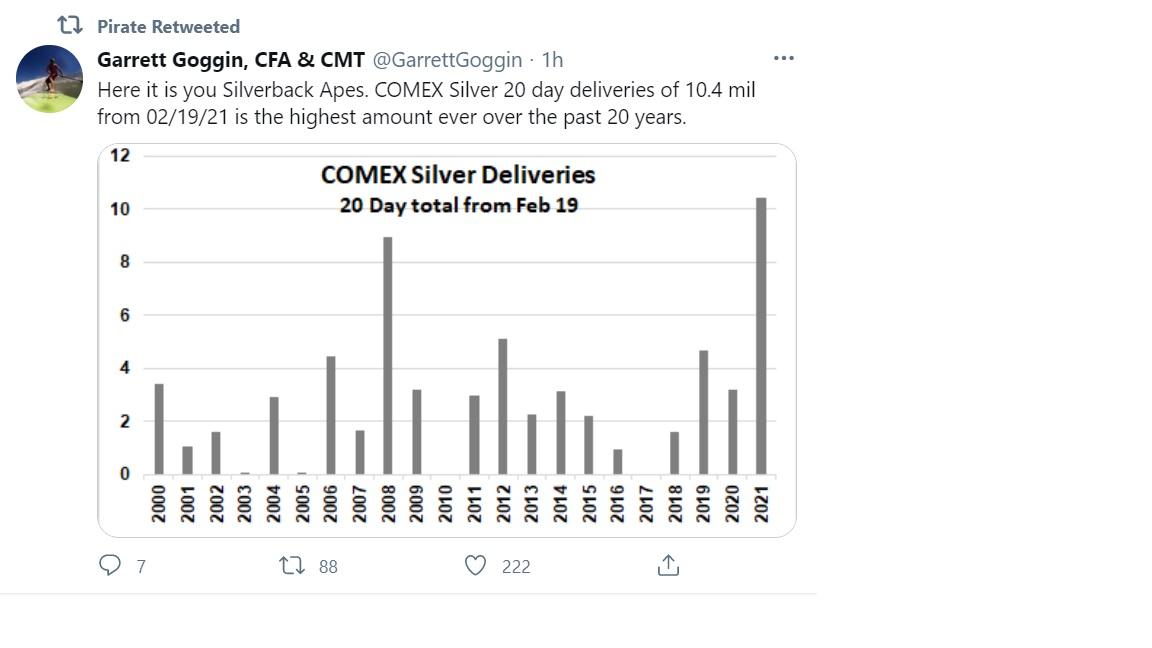 By “a run on PSLV” do you mean lots of silver bugs buying PSLV?

And do you think the masses of us silver bugs can through enough weight to offset those who can print and short to contain the price pressure?