Save Sweden – ‘We Are Many’

Four girls who are running this growing movement.

We are not just a few, we are many, and we demand action!

Are you also outraged by the Swedish Covid19 strategy? Do your own video or write your thoughts and use the hashtag #notafew. YOU ARE NOT ALONE, LET'S FIND EACH OTHER AND SUPPORT EACH OTHER IN THIS FIGHT!We are outraged by the swedish Covid19 strategy, we are tired of hearing that the strategy is a success even though "too many people died" and "we failed to protect the elderly", we are completely outraged that in a country like Sweden there is STILL no test – trace – isolate! We are tired of being harassed for wearing masks in Sweden during a pandemic, we will not be silenced and we will not be stopped from protecting our health and our families! #saveswedencov19 #notafew

Whatever is happening in Sweden, the falling case counts strongly suggest that things are improving.  Especially given those pictures from the New York Times which show that the Swedes are actually living their lives rather than hiding in the basement.

Something is working in Sweden.  That’s what the data shows.

Isn’t it fascinating that while there was this huge spike in cases, the deaths continued to move lower? 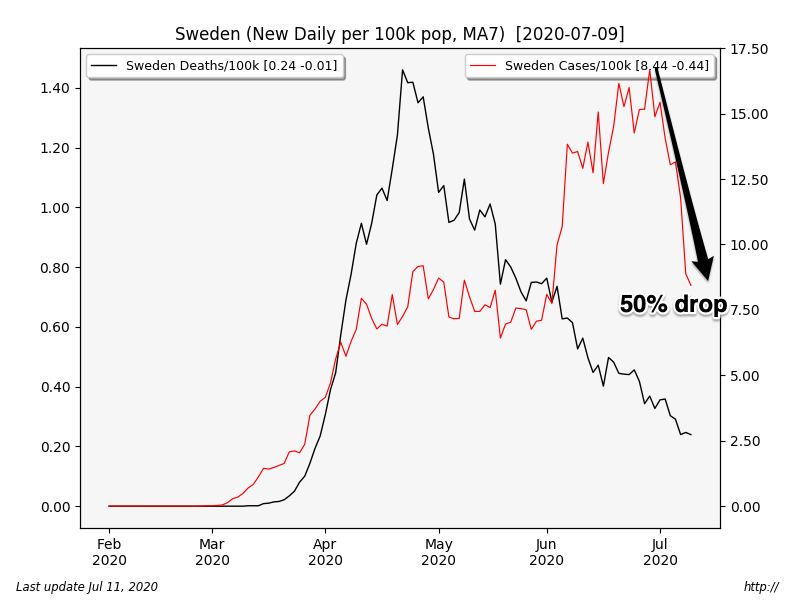 I agree with davefairtex. However, I also do understand Nyhetersverigs worries. When you read the stories about the treatment of old people with covid19, the tears start flowing. The approach failed the elderly and weak, and as a fan of Kants categorial imperative (nice intro), I find this totally immoral. This (temporary?) herd immunity has been reached over the suffering of the elderly (left to suffocate alone). This should have been managed vetter (in hindsight).

I personally find this strategy risky because it assumes that ADE will not occur. On the other hand, combined with some known interventions, zinc, ionophores, immune modulating substances, etc, the approach of a “cordonne sanitair” around the weak and elderly, could definitely be considered as a tool in pandemic management; easy for me to say, I do not have to bear the burden of responsibility, and I do not have to manage public opinions.

I totally agree with your suggestions about a cordon sanitaire around the elderly.

I believe that the intense propaganda campaign against zinc + ionophores, both in Europe, and here in the US, is significantly responsible for a large number of the later deaths in this pandemic.

As for ADE – is ADE a rare effect, or is it a common one?  It seems – on its face – something someone could test, in the case of SC2, in an animal model.

Short of that, if ADE is a rare occurrence in corona viruses, then it makes sense to plan on it not happening.  If it is a common thing, then it seems dangerous to assume it won’t happen.

While operating in conditions of uncertainty, you have to play the odds.  Mostly, I think, ADEs are rare, but casualties from poverty and emotional distress that comes directly (and very predictably) from the economic dislocation of halting the economy are well-understood.

As of right now, looking at the national data, Sweden appears to be doing well.  We will get an even more complete picture once we go into winter, and their neighbors (who definitely do not have herd immunity, because they locked down early) will be faced with their own predicaments.

By design, perhaps, those populations must now hope and pray for a poorly-tested vaccine to be rushed into production in order to save them; they must hope there are not too many vaccine injuries, and the injuries are not too severe and long-lasting in nature.  It will be interesting to see how that ends up working out for them – an experiment of an entirely different sort.

Both choices, really, are dice rolls.  Who do you trust?  Big Pharma, or the human immune system?

Do we have any good data as to what percentage have had it in Sweden?

Hard to say what country had the best method of flying when most of the instruments are giving conflicting readings and the sky is a complete fog, but I think we’re going to need to wait a little while longer before rendering judgements.

@nyhetersverige
, are you in Sweden? I’ve had an interest in some of the Nordic countries for a number of years that started with an interest in axes…