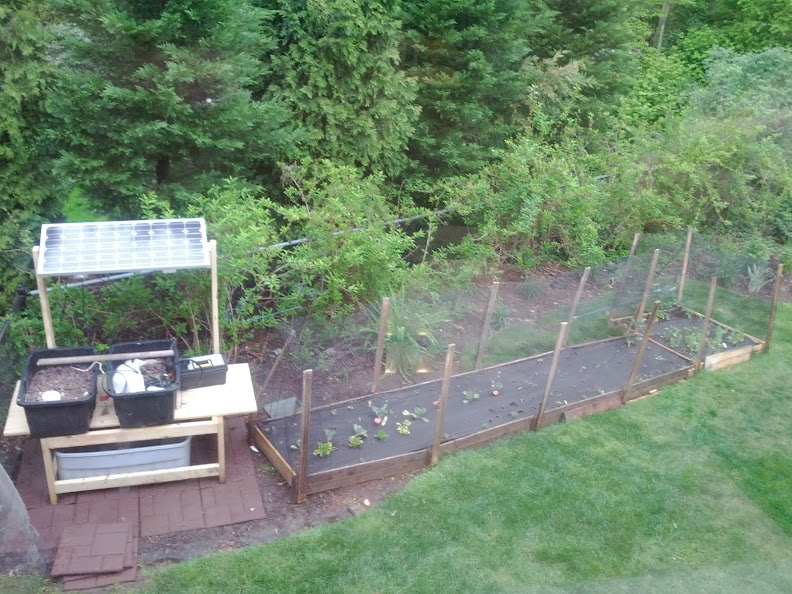 Unfortunately, it has been cold in Westchester County, NY and we only see a little growth in the SFG.  The celery that survived outside all winter is growing slowly. The pea plants are growing and I will put up the trellis mesh for them or move them to the back row where they can attach to the deer mesh.  The tomato plants that I bought from Home Depot are doing ok, but most of the seeds started indoors have not thrived and some have not survived the transplant.  I think it is due to the cold.  I thought the black weed-inhibiting gardeners cloth would help to warm the soil underneath, but only time will tell.

Last weekend I set up the Aquaponics area with a rubber base, placed the “fish tank” below it with a battery/invertor setup secured to the bench.  I installed the 100 watt solar panel to the bench to see if I can become off-grid (as the electrician has not yet come to run a power line from the house to this area in my backyard.

Today, I hooked up the solar panel with the solar-battery-charger unit to the battery backup and invertor unit which will hopefully run the water pump and air pump. I have started the system cycling. Will be testing it and the duration of power from solar charged battery over the weekend.  Still looking for 12 volt submersible water pump and a 12 volt air pump so I don’t have to lose too much inverting 12 volts up to 110 volts to run current aquarium pumps. I will also be experimenting with using the air generated by the air pump and bubbler stone in the fish tank to do double duty and create a water-air-lift system for the vertical grow tubes.  (See WindowFarm.org for info on the air lift system designs.)

I have to add Hydroton to make the grow beds deeper and adjust the siphons to work properly at the new height.  I am also setting up an additional grow bed (Thinking of trying the floating raft design which yeilded lettuce every four weeks last year).  I have also bought 4″ PVC pipe to make at least two vertical columns. I am not sure if I will use hydroton in them, which will require cutting horizontal slots and heating the PVC (which must be done outdoors with caution due to the toxic Poly Vinyl Chloride that is released on heating) to make openings for the plants. I am still trying to find media similar to the ZipGrow towers and just cut a 1/2″ slot up the center and put the seedlings in every 6″ or so as you pull the two halves of the media up the column.

I am trying to see which variations of aquaponics works best in my hands.

I also made contact with a grower of Tilapia fish and am trying to decide on whether to start with a breeding setup (one male and 4 females) or just some fingerlings.  I don’t know what I will do with the fish when the fall comes as my town has restrictions on greenhouses and it will be expensive to maintain outdoor fish tank at 80 – 82 degrees.  I think my wife would shoot me if I bring it indoors, even if it is in the basement. Also tilapia are prolific breeders, which is great for resiliency and a source of food, if needed, but they will need bigger tanks if I am successful in raising them.

Also thanks for the heads up on not tightly covering the wood pile.  My tarp is actually set with the tie-down away from the base of the pile to allow plenty of air to circulate and dry the wood.

Have gotten first plans for solar PV with generator back up.

Also have appointment this weekend for the Masonary Heater designer to take measurements and start those designs to we can reduce the need for 1300 gallons of heating oil to a reasonable number.

I am hoping more of the Rowe 2012 attendees will contribute to the forum. It was great sharing in person and making plans, but I am hoping I am not the only one implementing resiliency.  Let’s hear from the rest of you that were there in 2012 (or in 2011 which I also attended.)

Simon – did you know that there is s Square Foot Gardening thread, an Agriculture/permaculture thread, an Aquaponics thread, and even one on Heating with Wood?

Welcome and I hope you enjoy and add to all the forums.

Many of those forums have had no new posts in 2012.  The purpose of this forum is to support the attendees at Chris and Becca’s Rowe Retreat.  I attended it the last two years.  My purpose is to share what I am doing, in the hope that others who were there will take ACTION on their resilience plans.

Here is how she looked on May 14th 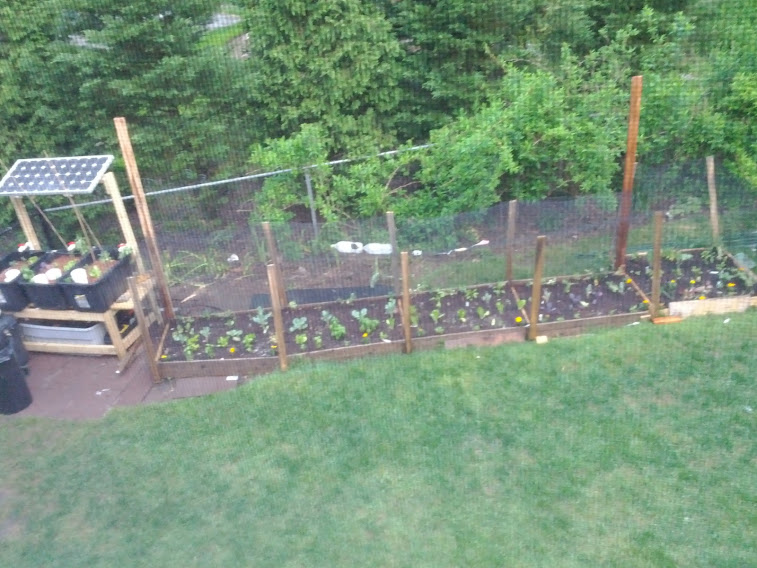 Took off the Black Gardeners ground cloth as the plants were getting too hot and the water was not penetrating as it should.

Two days later on May 17th 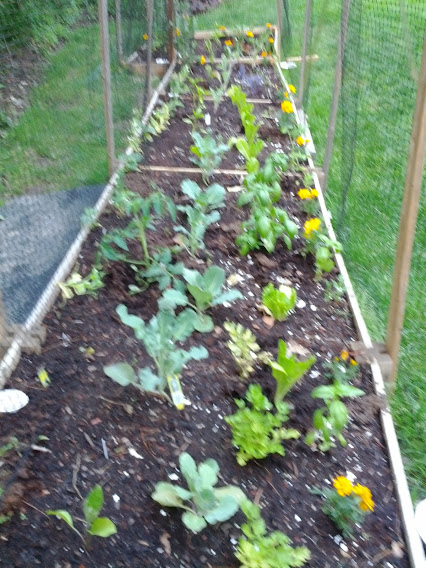 And the Aquaponics is cycling well. 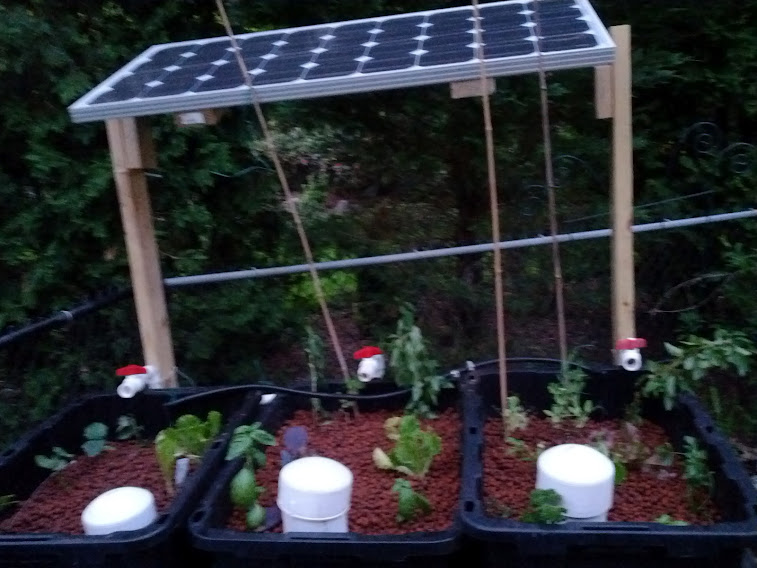 I have since switched over to direct faucet valves through the back wall to control the relative volume of nutrient water from the tank below.  Had some problems with leaks and lost of water so made some revisions.  Also made a vertical grow tower using 5 foot long 4″ PVC with a half inch slot down the middle and gutter protection sponge material converted to grow media by doubling it over and insert the seedlings as the media is dragged into the pipe.  I will have photos next time (when I can get home before dark) but a quick look this morning and the strawberry plants have fruit and the lettuce has grown and the other trial seedlings seem to have made it.

We have had two weeks of daily rain with tempatures ranging both 10 degrees below average and some 10 degrees above with several days of sun in the AM and early PM with thunderstorms in the evening..  Some of the things started from seed have taken and some have not.  Supplemented with purchasing seedlings from several nurseries in the area to see what is thriving in their hands. 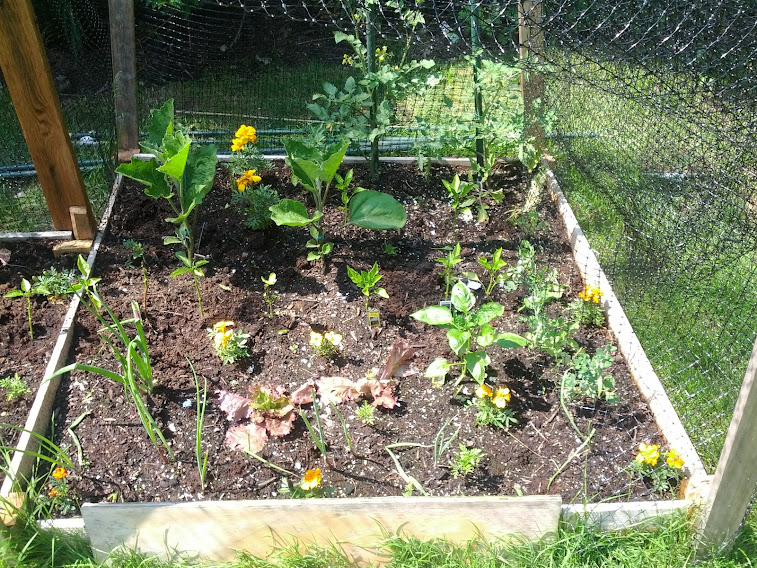 Above are two varieties of Tomatoes. with string beans on the back Deer Mesh as well as the right side. The large two plants are egg[lants with red and green peppers, lettuce and onions doing well.  The marigolds are an old farmers trick to attract bees and repell many insect pests. 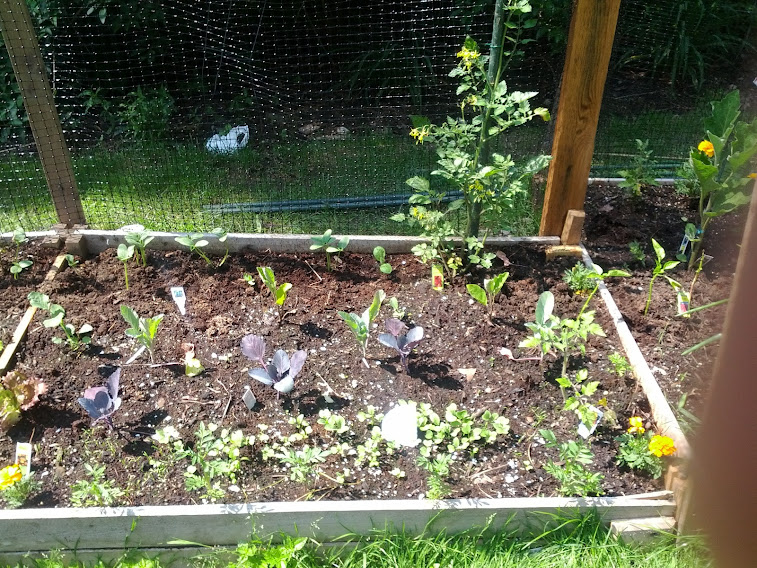 Another variety of Tomato, with cukes, cabbage, peppers and raddishes started from seed right in the garden soil. 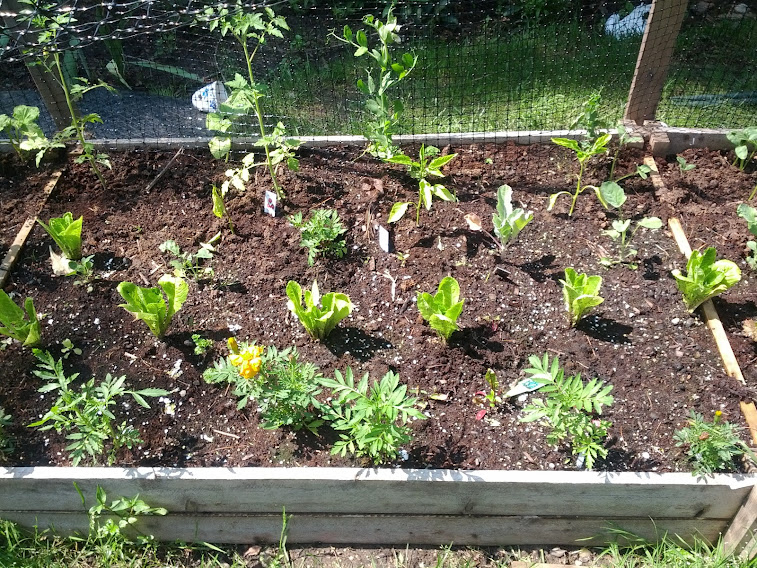 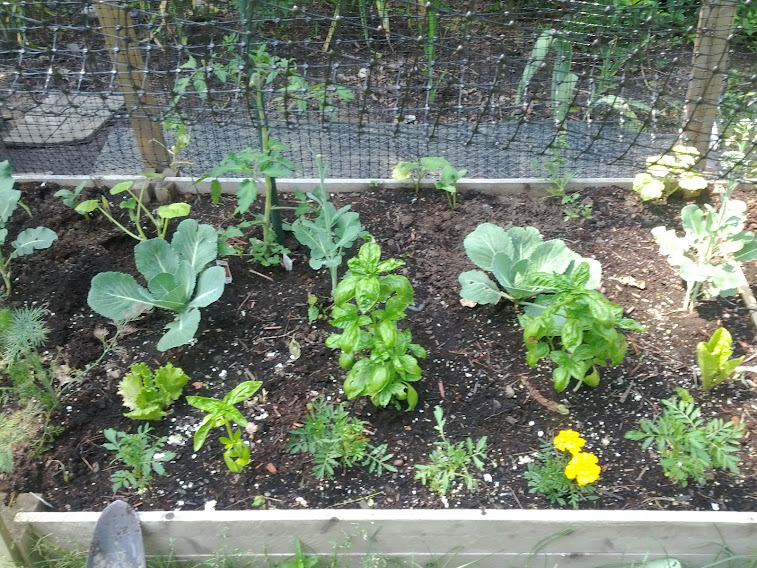 Tomatoes, cuks with cabbage doing very well alternating in that row with broccoli that shot up and immediately went to flower after the head was only a inch or so wide., The basil and dill are beginning to grow, after losing a bunch of basil to near frost temps two weeks ago. 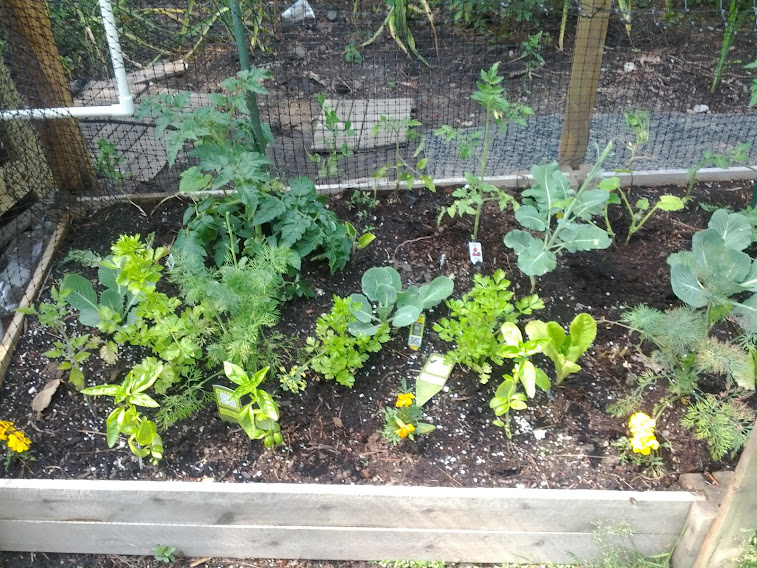 More tomatoes and cukes with flat and curly parsley. 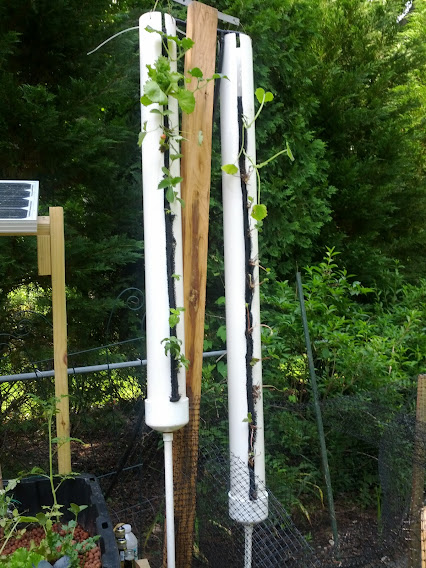 The latest addition are two vertical grow towers. made by slotting 4″ PVC and using the spun PET fiber from gutter leaf guards (from Home Depot that one may put in your gutters to allow water in and deflect the leaves.)  I used them folded in half and pulled 6″ at a time using a right angle corner bracket and inserting the seedling at each 6″ interval. The longer one on the right is all strawberries from ten roots and stems packaged in a  16 ounce drink cup that my daughter mail ordered.  On the left are basel, tomato seedlings we started from seed, strawberry and cukes.  Will have to see how they do.  Started the small one on Weds and the big one yesterday. Water is pumped up from the fish tank to the top and collected at the bottom with 2″ PVC draining back to the fish tank.

Below are the three grow beds with hydroton on the top. 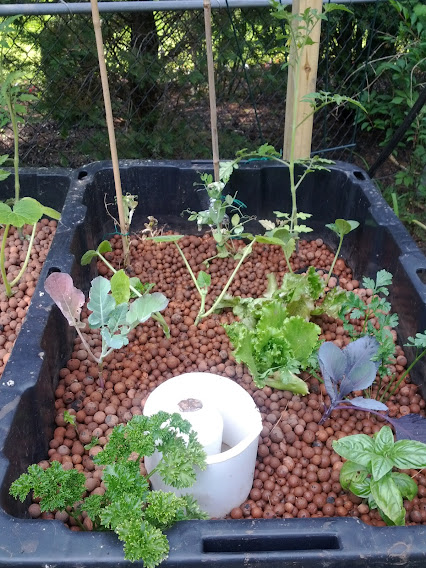 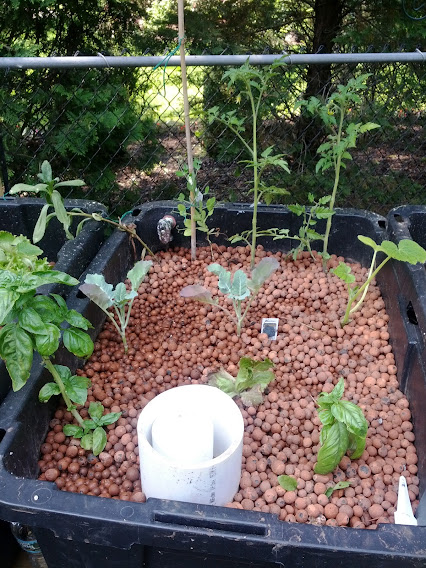 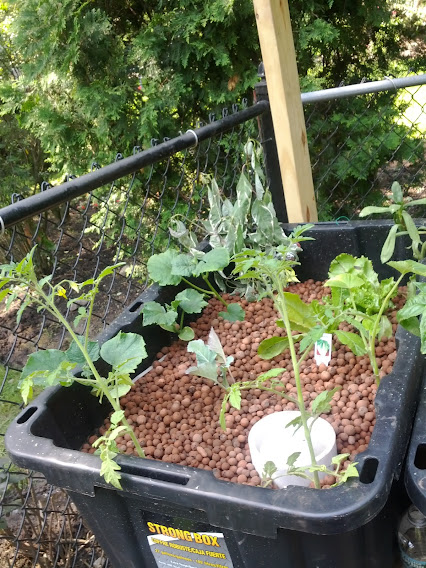 I added a bunch of left over seedlings after the photos and hope to give a progress report as the weeks go on.

I would love to hear from the other Rowe 2012 participants. 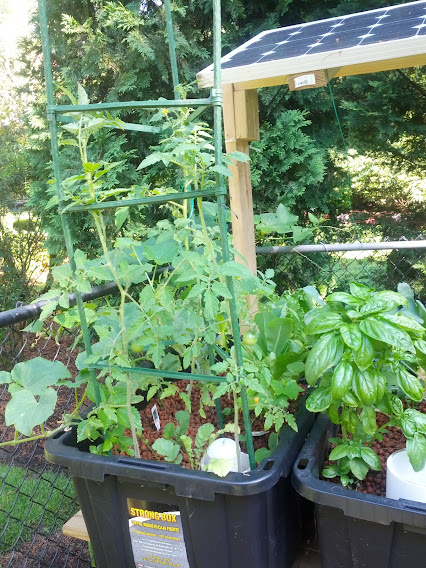 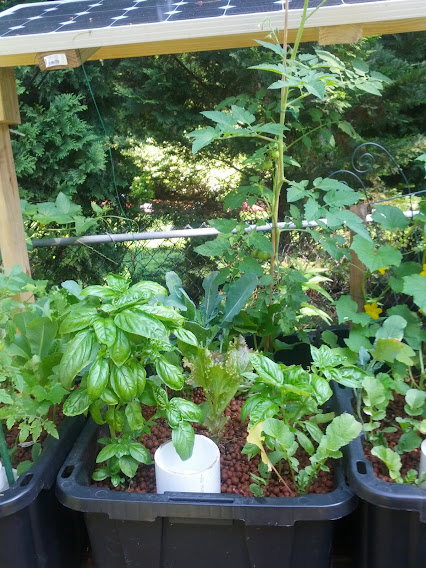 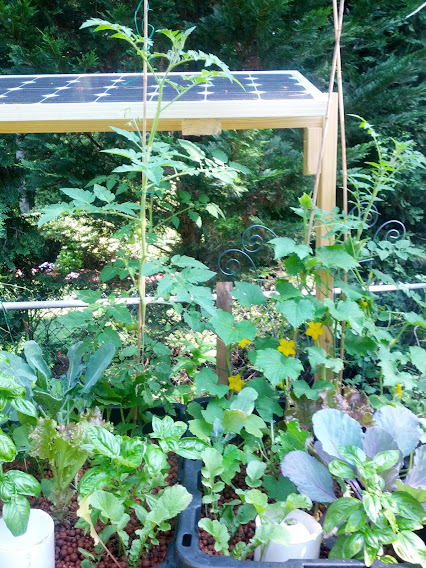 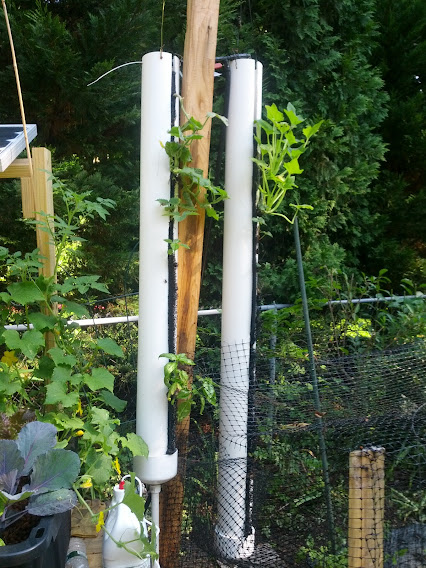 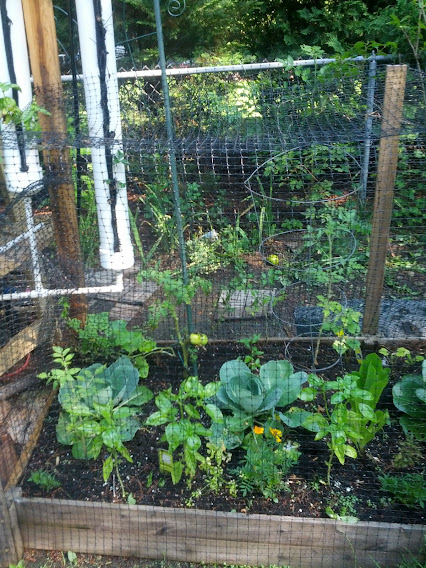 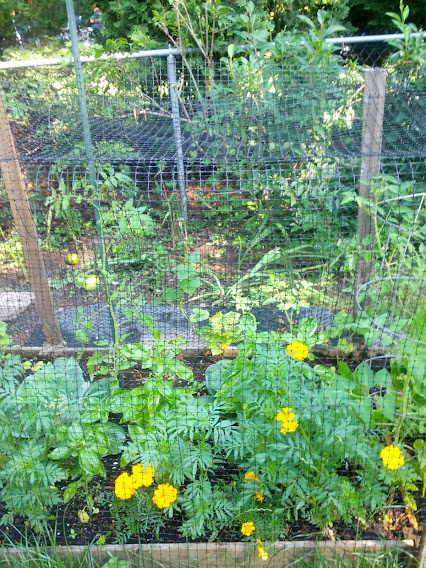 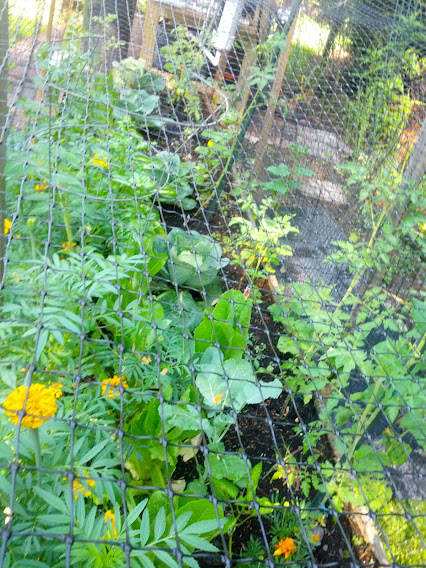 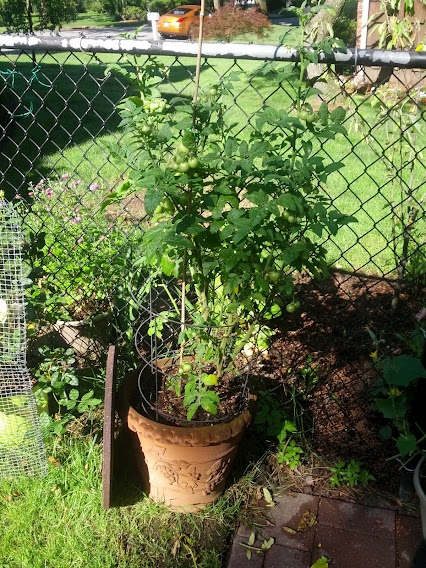 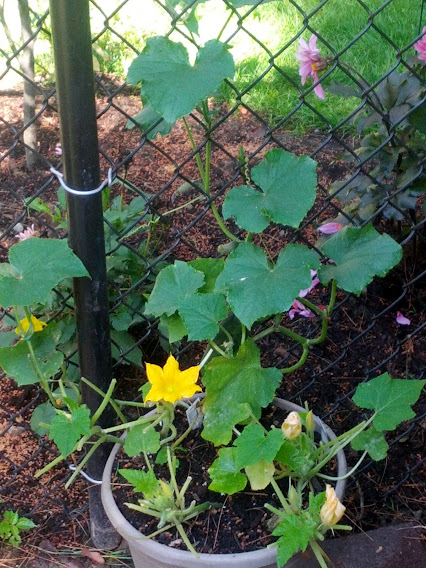