Perhaps Greek stocks are the ultimate puke.  Side of Dubai, anyone?  How about a slice of Hungary?

I still think there is going to be a great deal of puking on the exit of this “ultra-safe” gold trade.

Ergo, it’s got room to run!

Of course, to be fair, Bank of America stock only took a year to break 300%, lol.

The infrastructure for the gold market is still being developed for the general public, so I agree with the outlook that the gold bubble has yet to fully inflate. However, I think it might be getting closer to awareness. I’ve been sick lately and unable to sleep. Last night I watched 3 full hours of infomercials about investing in gold. Made me want to puke, and I did! I still think there is going to be a great deal of puking on the exit of this “ultra-safe” gold trade.

IIRC, there was another bank back in the tech stock boom that went up roughly 300% in a matter of days … NetBank.  But it’s gone and guess what shiny, yellow metal is still here?;-)  I agree though that when the time comes, one won’t want to get caught on the tail end of the gold bubble.  It’ll be a big one with a loud pop when it goes.

The most predatory of the vulture investors.

NEW YORK (CNNMoney.com) — BP’s stock rose 2% at the start of trading on Monday after the oil giant announced that it is making progress in capping the oil leak in the Gulf of Mexico.

BP (BP) said on Monday that 10,500 barrels of oil had been collected on Saturday. This means that a total of 16,600 barrels were collected between Thursday and Saturday. The spill is leaking at least 19,000 barrels a day.

BP also said it has spent $1.25 billion so far in its efforts to cap the well and clean up the resulting spill, which has fouled the beaches of Louisiana, the hardest hit area. This includes $360 million to build and install structures to try and keep oil from washing ashore on Louisiana’s barrier islands.

Thousands of people have been put out of work and the fishing industry is in shambles, though BP has pledged to pay compensation for all legitimate claims. Damage estimates range from $3 billion to $40 billion.

Nonetheless, BP Chief Executive Tony Hayward told investors in a conference call last week that his company is in sound financial shape. Another executive said the company generated $30 billion in cash over the last four quarters.

The problems stem from a disaster that occurred on April 20, when the Deepwater Horizon offshore rig exploded and sank, killing 11 workers.

BP owns the well, while the rig is owned by Transocean (RIG), which saw its stock rise nearly 2% at the start of trading.

BP is in the process of digging two relief wells to try and siphon off oil, but it could be three months before they’re completed.

Gulf Coast residents, workers and business owners are bracing themselves for the full extent of the economic and environmental damage, since no one really knows when the spill will be capped and where the currents will take the oil.

Florida tourism officials said that “dime to quarter-sized tar balls” have been found on beaches in the Panhandle.

“Additional impacts are expected throughout Northwest Florida within the next 72 hours,” according to a statement posted Sunday on Florida’s tourism Web site says. “At this time, there are no beach closures and Florida’s state waters remain open to recreational fishing.”

Scott Adams (Dilbert cartoonist) had an interesting article in the Wall Street Journal this weekend:

where he dicussed investing in companies you hate like: 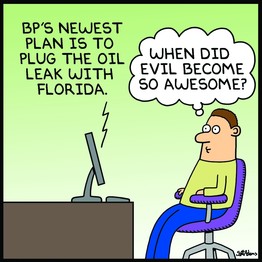 I think your point is more valid if you say that people should consider investing in whatever makes the average herd-mentality investor want to puke.

I think I was sort-of implying that we are all average herd-mentality investors, only that we think our blogosphere “herd” is superior, when in fact the only thing superior about it is its value to the contrarian investor.

Yeah but how small does the group have to get before it stops being considered a part of a “herd”? By that logic we could eventually say every group of a few people is a form of herd and we should invest our money against what they like, or with what they hate. I guess my point is the results you orignally posted can be explained without the conclusion that the investments worked simply because you, or a small group of people like you, personally hated them. I’m pretty sure you weren’t implying that your hate was the cause for the investment’s success, but I don’t think it was even related at such a small scale.

JAG’s “Puke”, or “Avoid the Herd”, investment strategy reminds me of advice I first heard regarding the adoption of new medical/surgical technologies: “Never be the first one on the bandwagon, nor the last one off”.