Recently, in his latest report, Dr. Martenson quoted a WSJ interview with value investor Seth Klarman. Though I was not familiar with Mr. Klarman or his work, I found one of his statements resonated with my own personal investing experience:

“And, said Mr. Klarman, one of the best ways to protect against a decline in purchasing power is to buy whatever is “out of favor, loathed and despised.” So forget about gold or other trendy hedges. Instead, wait patiently for markets—European stocks, perhaps—to get so cheap that they turn most investors’ stomachs. Then you can pounce.”

In other words, at any given time, the “safest” investment is the one that makes you want to puke. This of course, goes against our natural or “gut” instincts. Our instinct is to believe that we are safest when we are part of the herd, whatever herd it is that we decide to join. But reality demonstrates that it is often the herd itself that poses the most risk to the individual, and not some “monster” lurking in the peripheral world.

I decided to do a little back testing on this theory and I want to share my results (albeit they are cherry-picked a bit to make a point). So my backtesting was set up like this:

The first Puke-asset that came to mind immediately was Bank of America stock. I hate everything about this company, and I have even fantasized about applying weapons-of-mass-destruction to it. In the first quarter of 2009, I specifically remember telling my wife “Only a fooking idiot would own this stock”. After a disagreement with a bank teller at BAC, I immediately went and bought PMs in retaliation. 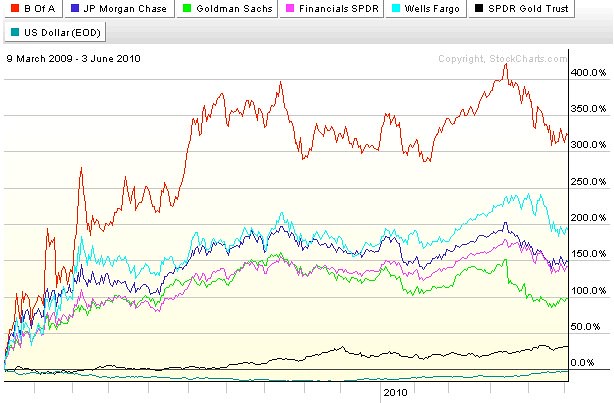 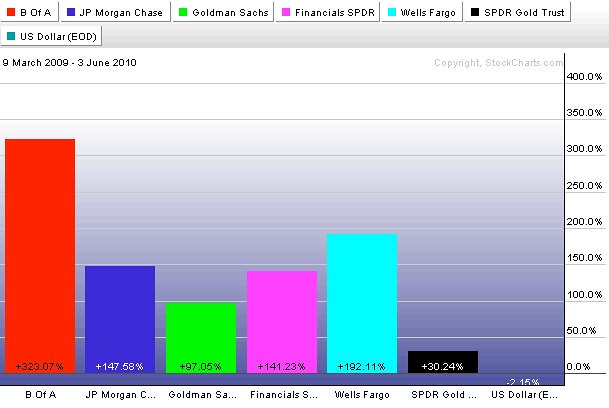 Holy Cow!  Bank of America has gained over 320% in just over a year, and my gold that I purchased out of spite appreciated just 30% in price. (Meanwhile, the US dollar lost just 2% of its global purchasing power over the period). Take a wild guess who my wife thinks is the “fooking idiot” now?

About that same time period, my brother-in-law began aggressively buying up rent houses in my area. I remember telling him “Only a fooking idiot would be buying real estate of any kind right now!” 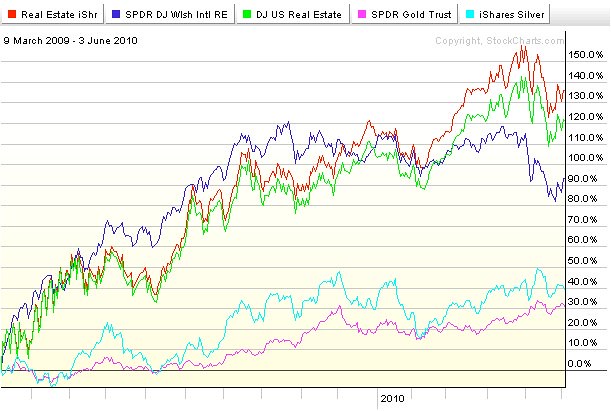 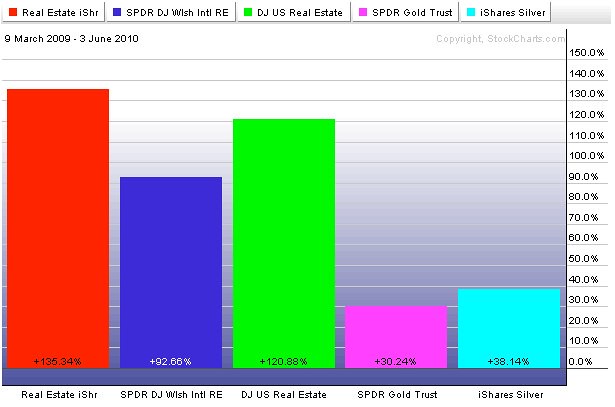 Crap! Again the performance of the puke-investments blew away the “logical” investments.

OK, so now in the fall of 09, I’m getting a little “wiser” and soon come to the realization that the only reason these puke-assets out performed PMs during this period was because they were being supported by the Fed/Gov. All summer we had watched the USD slowly grind down, as the almighty Fed took control and enforced its will on the marketplace. By October and November, the USD was “King of Puke”, and you had to be a fooking idiot to not trade all your worthless dollars for gold.

Well, I didn’t fall for it this time…I went “the full-Puke” in the fall of 09 and this has been the results so far. 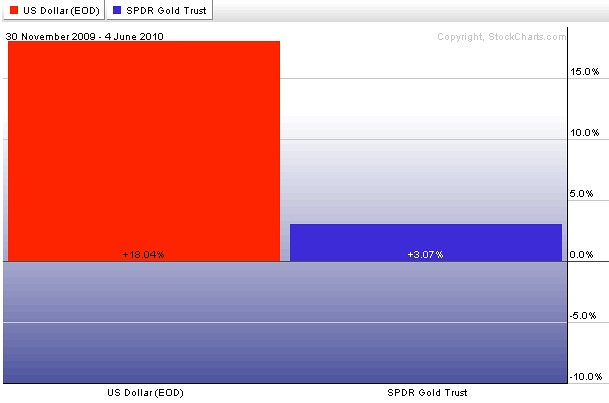 So with this information, my personal investing strategy has evolved into:

What makes you want to puke is subjective and based on the information available to you and your analysis of that information. There were certainly people (like Robert Pretcher) who were very bearish in 2008-09, but nonetheless realized that the bailouts and stimulus/liquidty injections would create a strong bear market rally in stocks and prop up the housing market. I think your point is more valid if you say that people should consider investing in whatever makes the average herd-mentality investor want to puke. Even then, I’m of the opinion that the coming years are going to be different from the previous ones in almost every way imaginable, including the soundness of previously sound investment advice. What makes me want to puke right now is just about everything… and I’m pretty sure I’ll continue puking if I buy into those things. This is why I will only short to raise cash and keep some physical PMs as longer term investments.

I don’t see gold as a money making investment, merely a storage of wealth that won’t go down the toilet WTSHTF…..  so of course investing in “PUKE” will make you more money, so far, because TS has not HTF…….  yet.  But it will.

I now own everything I could ever need and want….  and not one ounce of gold.  And no puking!

I’m not so sure that gold and silver are trendy investments, as Mr. Klarman states.  On forums like this, yeah you’ll find a lot of gold and silver bugs.  Go out into the general population and the story gets a whole lot different.  Nobody I know, except for my parents, owns any precious metals.  When I talk to people about gold and silver, they just give me strange looks. When the average person is shopping for precious metals, then I’ll be looking for my exit.

As for GLD and SLV, they’re nothing more than a proxy for the actual metals they represent. Right on their prospectuses they state that investors are unsecured creditors, meaning they have no claim on any of the metal these ETFs supposedly have.  They are not gold and silver, they are derivatives!  If you want the real thing, go to the coin shop, stay away from the paper markets!

I now own everything I could ever need and want….  and not one ounce of gold.  And no puking!

C’mon Mike, we all know your just dying to get you one of those iPads….lol.

I guess we all should be buying BP.

I guess we all should be buying BP.

I didn’t say it, but since I hate BP at least 3X as much as BAC, we should have an easy 10 bagger on our hands. Thats pretty pathetic, huh?

Don’t forget the Euro. You don’t actually think the Euro is going to go to zero, do you?

Can we buy BP in Euros via Bank of America’s brokerage…..lol

I think your point is more valid if you say that people should consider investing in whatever makes the average herd-mentality investor want to puke.

I think I was sort-of implying that we are all average herd-mentality investors, only that we think our blogosphere “herd” is superior, when in fact the only thing superior about it is its value to the contrarian investor.

This investment philosophy has long been espoused by Steve Sjuggerud with a little twist.  I’m paraphrasing crudely here but he would talk about investing in something hated that becomes just a little less hated.

With that thought in mind, we had my son’s graduation party this weekend and also went to a number of other graduation parties.  I talked to a lot of people including doctors, lawyers, scientists, engineers, etc. about various topics including investing and gold.  By and large, gold was still hated and feared with only one person expressing more of an interest after remembering that I had recommended buying gold and silver at a party a year or so ago and observing that it has gone up significantly since then.  While gold seems “loved” among those on this blog and increasingly so in the financial media, among the general public, from my limited experience, it is still feared and “hated”.

One still has to be careful about this investment philosophy though.  Such companies as Lucent come to mind.

Wow, Thanks ao for the trip down memory lane. I remember that there was a financial newsletter in 2002 that recommended buying gold coins, but I could not for the life of me remember the author’s name. Bingo…Steve Sjuggerud…. It was the first time that I had ever heard of PMs and I did consider doing it, but found it to hard to actually execute the investment. Wish I had found a way however: 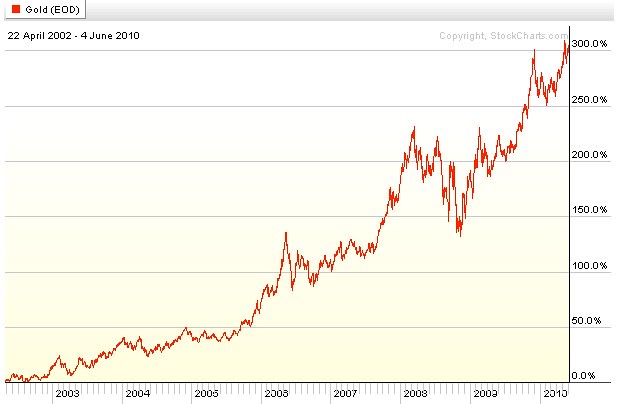 Of course, to be fair, Bank of America stock only took a year to break 300%, lol.

The infrastructure for the gold market is still being developed for the general public, so I agree with the outlook that the gold bubble has yet to fully inflate. However, I think it might be getting closer to awareness. I’ve been sick lately and unable to sleep. Last night I watched 3 full hours of infomercials about investing in gold. Made me want to puke, and I did! I still think there is going to be a great deal of puking on the exit of this “ultra-safe” gold trade.