Researchers at Scripps came up with a “prion model” – using this nasty substance TPrP (a “misfolded protein”) which, when added to neuronal cells, ends up killing them off after a number of days.  Then they tried to figure out why:

Toxic prion protein-exposed neuronal cells exhibit dramatic reductions of intracellular NAD+ followed by decreased ATP production, and are completely rescued by treatment with NAD+ or its precursor nicotinamide because of restoration of physiological NAD+ levels.

“Prion diseases are fatal brain diseases of animals and humans and belong to the group of protein misfolding neurodegenerative diseases such as Alzheimer’s, Parkinson’s, and Huntington’s diseases, frontotemporal dementia or amyotrophic lateral sclerosis. The common feature of these diseases is that their aetiology is linked to the misfolding and aggregation of a host protein.”

So why do we care?

Here’s a non-peer-reviewed paper that says the dreaded plague has a prion-like domain, located in the spike protein:

And of course all the spike-containing Holy Shots use a modified spike protein – retaining the prion-like domain.  Here’s a paper that shows an association between the AZ shot (vs the Pfizer shot) and neurological effects possibly arising from the prion-like domain in the shot:

My takeaway: post-vax, or post-COVID-infection (i.e. after exposure to the flock of prion-like-domain-filled particles), it would seem to be a good idea to assure that one has absolutely no NAD+ deficiency.

And the more rapidly this is addressed, the more NAD+ deficient neuronal cells will be rescued from possible prion-mediated cell death.

“it would seem to be a good idea to assure that one has absolutely no NAD+ deficiency.”

How does one make sure of this?

What a finding and synthesis, DaveF!!

I am relieved that nicotinamide was effective as it is readily available and doesn’t cause that flushing (which I do NOT enjoy)!  (Nicotinamide MonoNucleotide–NMN)

I learned more about the scope of this amazing molecule here.

Anything that’s a NAD+ precursor should help for this purpose.  This includes NA, NAM, NMN, and NR.

As you know, flush niacin does have other benefits – cholesterol, and M1-M2 repurposing (like ivermectin).  But…”some people” don’t like the flush.  So “No Flush Benefits For You!” 🙂

If I had to guess, many if not all of the fantastic virtues ascribed to the pricey NMN also apply to the much cheaper NAM.  Its just that NAM doesn’t have a marketing arm, while NMN (and NR) both appear to have one.  I read the paper – at least half of it.  Kinda funny – their diagrams just don’t include NAM, even though that’s a main component of the “salvage pathway.”  Gosh I wonder why? 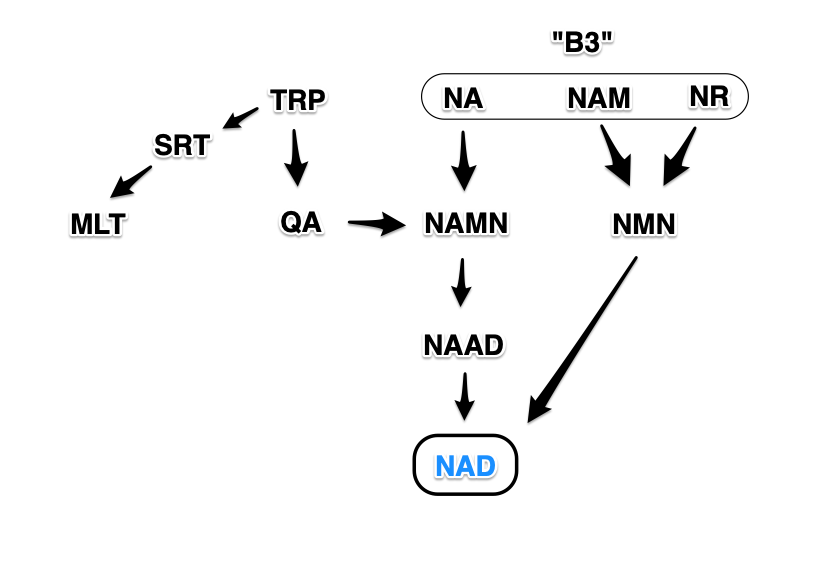 many thanks for all the fine information and material you contribute to this community, but this one hits home especially for me, since I may have a predisposition towards Parkinson’s, which killed my father.

Happily, I have been scarfing flush niacin daily since you first brought the information to our attention, so here’s hoping it’s got a preventative effect! In addition, of course, to all the other salutary effects!

Thank you! This news brightened up my day. My husband was jabbed early (and is now one of the few jabbed people I know who’s anti-jab and actively encourages people to not get it). He’s been taking Niacinamide  (500 mg three times a day) for several months. He was about to sign himself up for surgery to “correct” nerve pain and inflammation when I finally convinced him to give niacin a chance. He’s now a complete believer in niacin and has even sent bottles to family members with similar issues. We have used both Nature’s Way (about $8 for 100, as noted above) and bulk from Bulk Supplements.

If you order larger quantities from Bulk Supplements, it ships in separately sealed bags, which is nice for storage. We got a kilo and it shipped in 5 individually sealed bags.

My goal is to keep all my jabbed friends healthy – as well as all my COVID-recovered friends too.  These gp120-infested spikes just aren’t great for health.

Old Doc Fauci – and his higher-ups – have a lot to answer for.

Still, in the silver lining department, I know a LOT more about health situations now than I did 18 months ago.

Dr. Kevin W. McCairn Ph.D. noted the neurological aspects of COVID-19 as far back as January 2020 & has been following developments since….

His conclusions are that there are no safe levels of prion activity in the body – but not everyone will succumb to its effects.

Also, a prion-producing virus is the ‘holy grail’ of bioweapons – but would also likely lead to an extinction level event.

Hi Dave, I meant how do you know when you have enough in your body? can you test your levels or do you go by how you feel?

So which one gives you the flush? Im confused by the seemingly endless ‘types’ of niacin.