Friday’s plunge in gold and especially silver was follow-through from Thursday’s “risk-on” US-China trade news; talks are apparently back on, and will re-start face-to-face in early October – immediately following the CCP’s 70th birthday celebration scheduled for October 1st.

This week’s metals sector map has copper in the lead, while miners led metals lower, and silver led gold lower. This is bearish for PM; we may be entering a correction. It is still early, as the PM elements have only dropped below the 9 MA – and copper has only crossed back above its own 9 MA also. This nascent correction was driven by the positive news from the US-China trade situation.

Gold fell -11.10 [-0.73%] to 1519.76. Most of this week’s drop happened on Thursday. The long black candle was mildly bearish (38%), and forecaster dropped hard, entering a downtrend. Gold is now in a downtrend in both daily and weekly timeframes.

Surprisingly, gold/Euros remains in an uptrend in both weekly and monthly timeframes.

The gold commercial net fell by -4k contracts; it was a very small change, but the short position is now at the highest level ever. Managed money net rose by +5k contracts; +7k longs, and +2k shorts. The commercial short position continues to signal a top for gold.  How much short-covering took place on this week’s sizeable correction?  We won’t know until next week’s COT report. 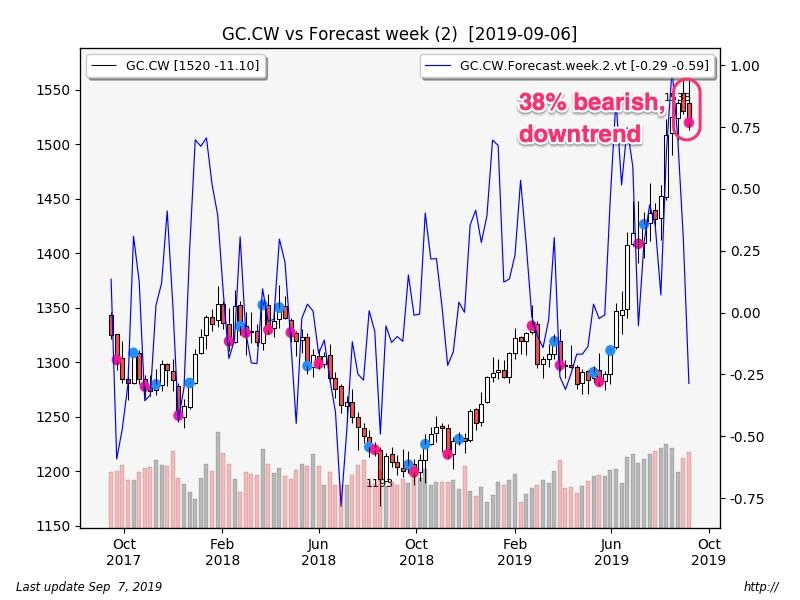 Silver fell -0.24 [-1.30%] to 18.24. All of the losses came on Thursday and Friday following the US-China trade news. The shooting star candle was bearish (53%), and forecaster moved lower but remains in an uptrend. Silver ended the week in an uptrend in both weekly and monthly timeframes.

COMEX SI open interest fell -158 contracts on Friday, and -2,263 contracts for the week. 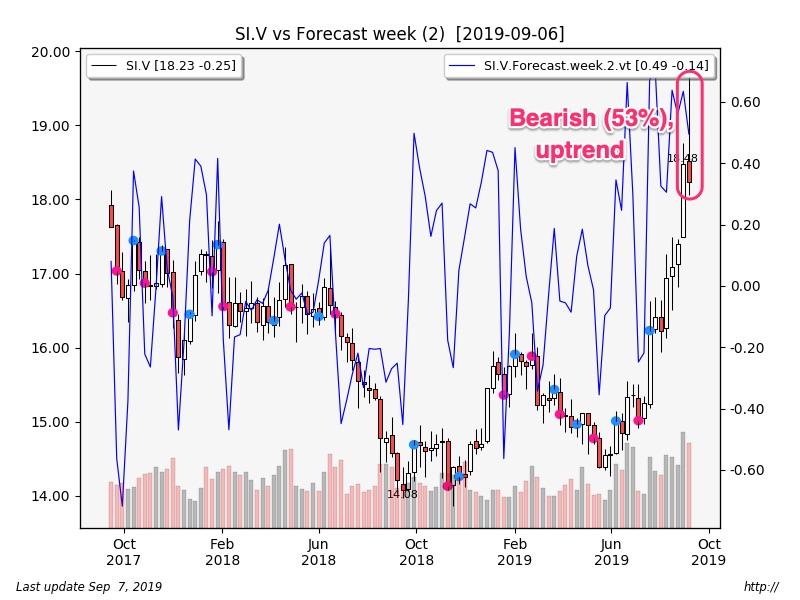 XAU fell -4.77% this week, dropping into a daily downtrend on Thursday. The weekly swing high pattern was quite bearish (72%), but forecaster inched higher and is now in a slight uptrend. This puts XAU in an uptrend in both weekly and monthly timeframes. 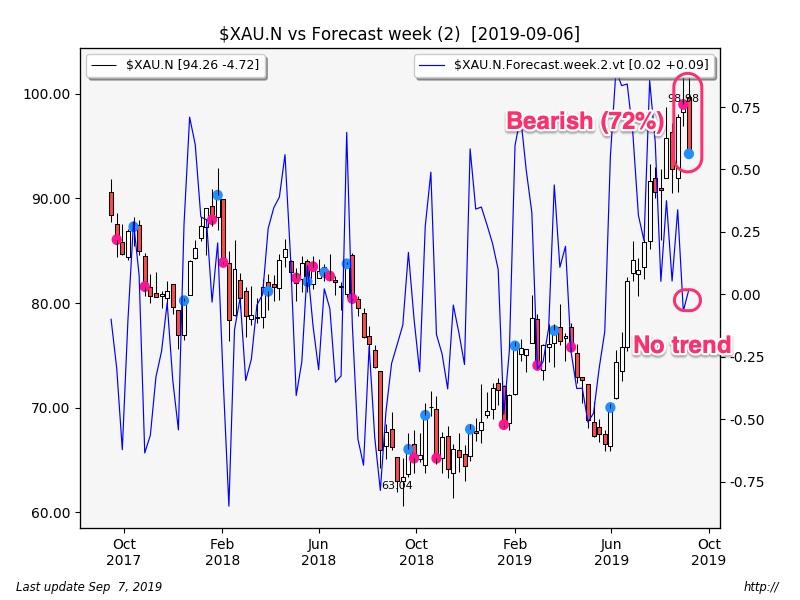 The buck fell -0.53 [-0.54%] to 97.95. The fall in the buck came on Wednesday, prior to the US-China trade news. The bearish harami was bearish (51%), and forecaster fell but remains in an uptrend. The buck is now in a downtrend in the daily and monthly timeframes. 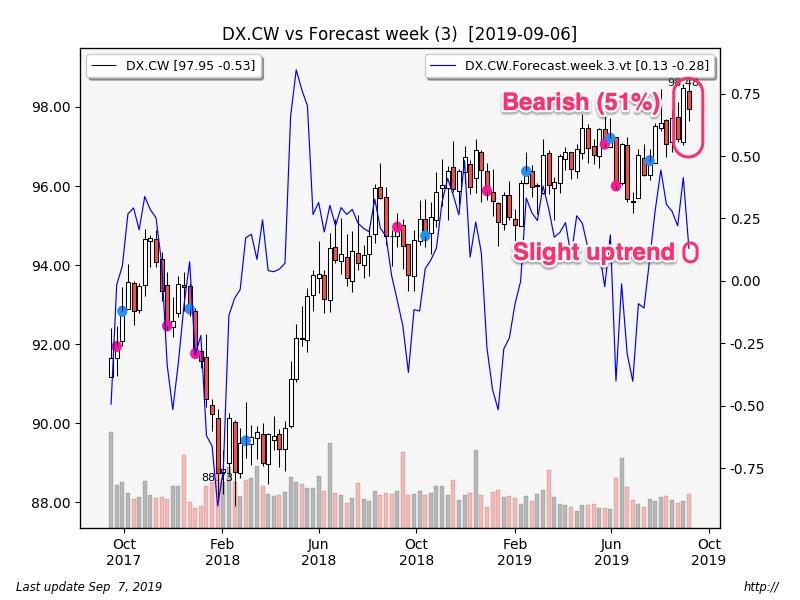 SPX rose +52.25 [+1.79%] to 2978.71. The long white candle was neutral, and forecaster moved back into an uptrend. This was enough to pull SPX monthly into a (slight) uptrend also; SPX ended the week in an uptrend in all 3 timeframes. September is here, but the US-China trade deal appears to be dominating. 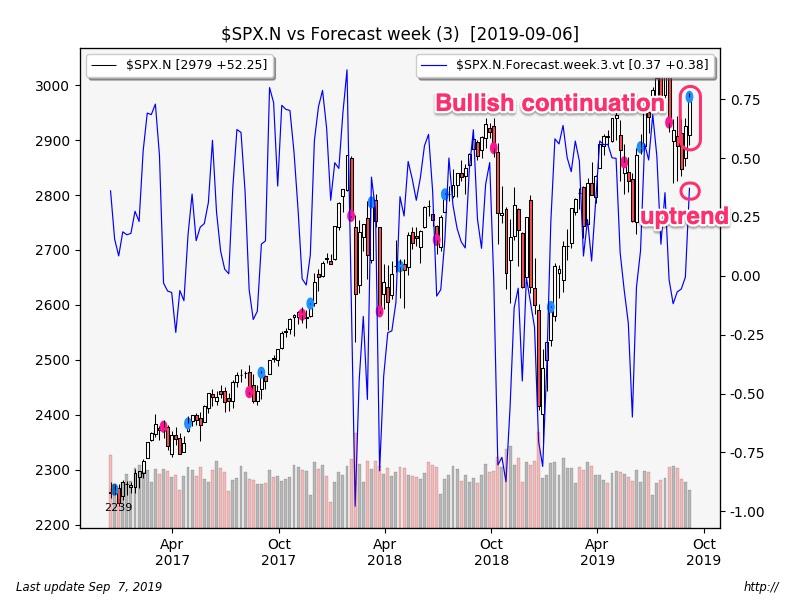 Sector map had discretionary and energy leading (with tech and financials close behind), while utilities and sickcare trailed. This is a bullish sector map. Many items are back above all 3 moving averages.

Globally, US equities did worst, with Latin America doing best.

Bonds are starting to retrace, although unlike gold, they have yet to actually reverse direction on the longer-term timeframes. 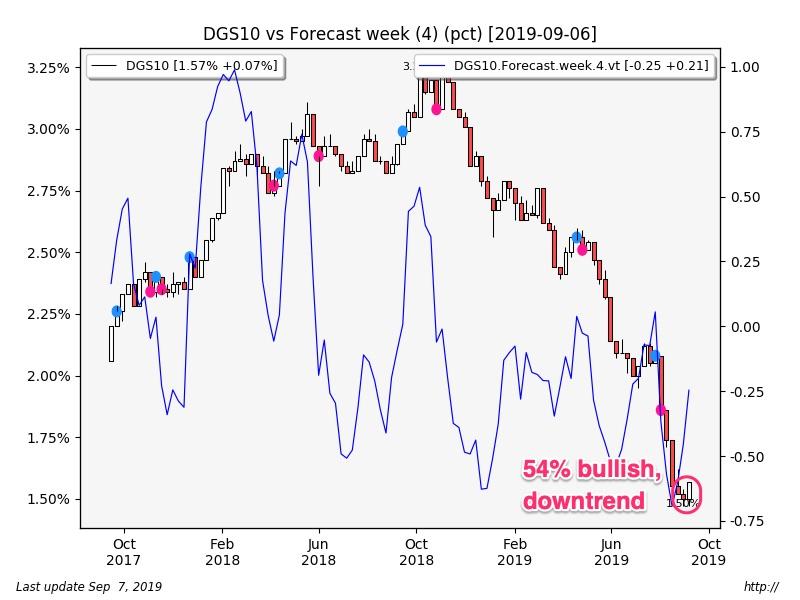 JNK rose +0.02% on the week; JNK cratered on Monday, and spent the week recovering. JNK ended the week in an uptrend.

BAA.AA differential was unchanged, ending the week at +91. The credit market remains unconcerned. 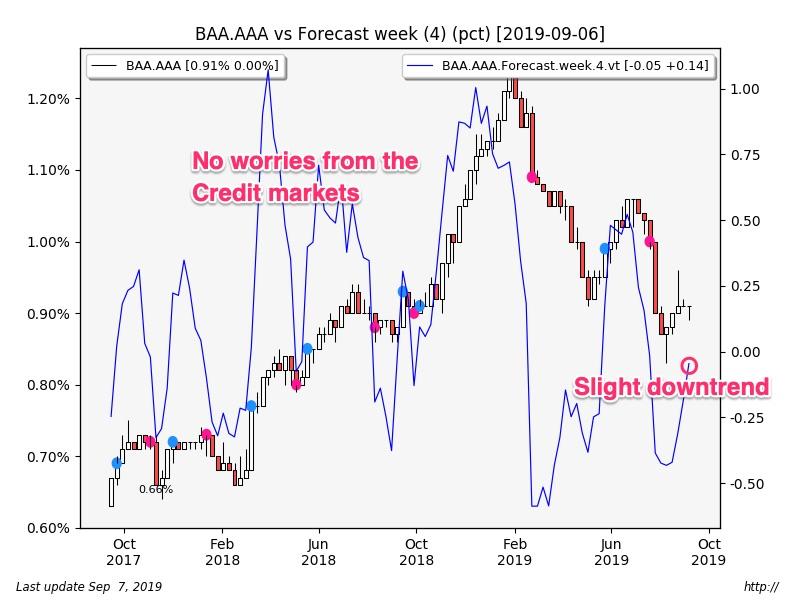 Crude rose +1.52 [+2.77%] to 56.45. The spinning top candle was bullish (48%), and forecaster jumped into an uptrend. Crude ended the week in an uptrend in both daily and weekly timeframes, and is now back (just barely) above all 3 moving averages. The EIA report on Thursday looked reasonably bullish (crude: -4.8m, gasoline: -2.4m, distillates: -2.5m) but it didn’t move price; it seemed as though price had already rallied in advance of the report.  Mostly crude’s move had to do with the US-China trade optimism. 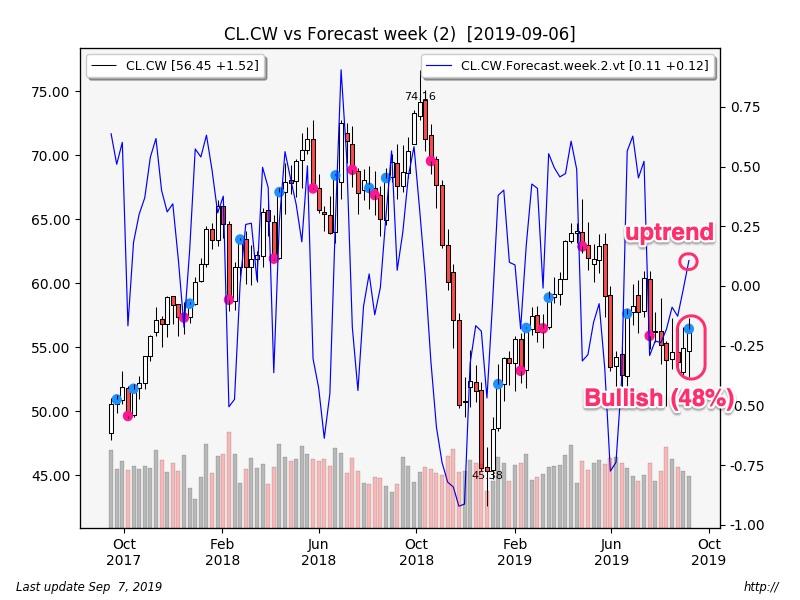 * Premium for physical (via Bullion Vault: https://www.bullionvault.com/gold_market.do#!/orderboard) vs spot gold (loco New York, via Kitco: https://www.kitco.com/charts/livegoldnewyork.html) shows no premium for gold, and a 6c discount for silver (London).

The potential resumption of US-China trade talks caused a reversal in gold, silver, and the mining shares this week, as well as a rally in equities. Is this simply a mirage, put in place by China attempting to distract the US from Hong Kong, or is this an attempt by China to avert “decoupling”, which would result in millions of manufacturing jobs lost in China, transferred to other countries that are not potential geopolitical rivals? We won’t know for a few months.

In the meantime, US manufacturing continues to weaken, while services remain strong.

China has relented and has allowed Carrie Lam to withdraw the extradition bill. This should reduce the pressure on the HKG/USD peg, and also reduce the chances that things blow up spectacularly. It only took them 14 weeks to figure this out, but they finally did.

We have an ECB meeting next week. A money-printing campaign driving rates even more deeply negative should help gold, in spite of the US-China news. If the ECB coughs up the money printing, this should ensure that gold’s correction will be shallow, especially viewed in Euros.  That’s the theory anyway.

The COT report continues to show a high for gold, while the COT report for silver looks much more ambivalent.