Friday’s strong gold rally started when Chinese negotiators canceled a farm visit, cutting their trip short and heading back to China earlier than planned. The news hit the wires about 1:10 pm, and that drove gold higher along with bonds, while SPX fell.

The metals sector map is the reverse of last week; silver led gold, juniors led seniors, and miners led metal. That’s the sign of an uptrend. Copper did quite poorly, suggesting trouble with the US-China trade deal. It appears as though the PM correction is over. How long this holds is anyone’s guess, however – there have been a large number of twists and turns in this trade deal to date. 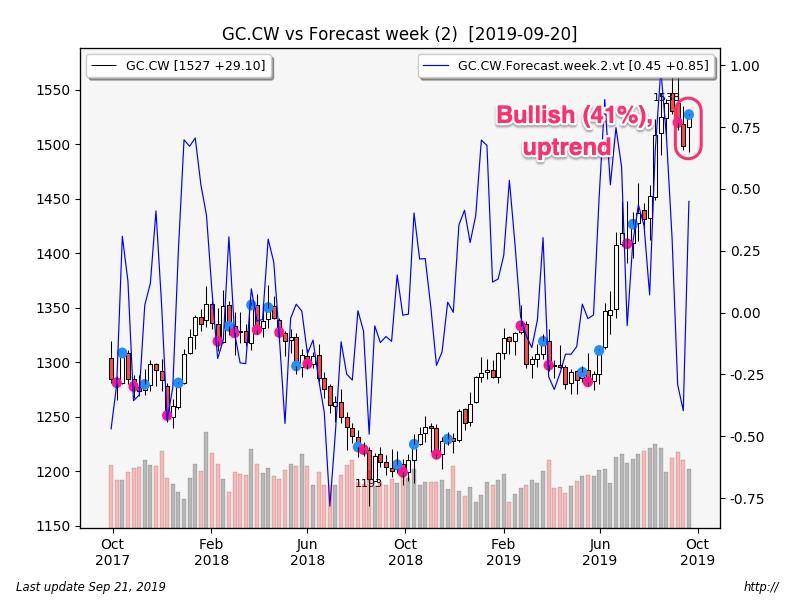 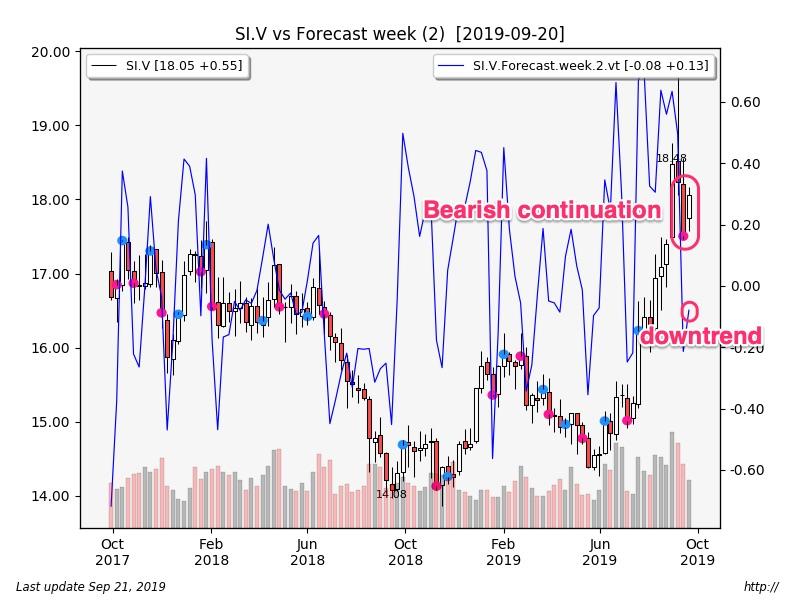 Miners recovered all their losses from last week plus a little extra; XAU climbed +5.71%, the bullish harami was quite bullish (56%), and forecaster inched higher pulling XAU back into a slight uptrend. XAU’s reversal on the daily looks much more emphatic; XAU ended the week in an uptrend in all 3 timeframes. 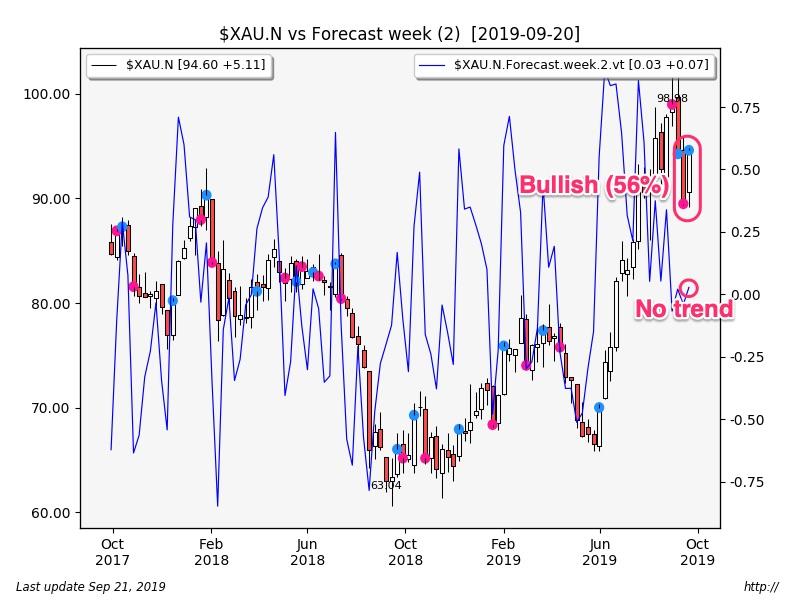 The buck rose +0.27 [+0.28%] to 98.10. The buck spent alternating days rising, then falling, then rising, etc. The short white/NR7 candle was unrated, and forecaster moved a bit higher into an uptrend. The buck remains in an uptrend in both daily and weekly timeframes. 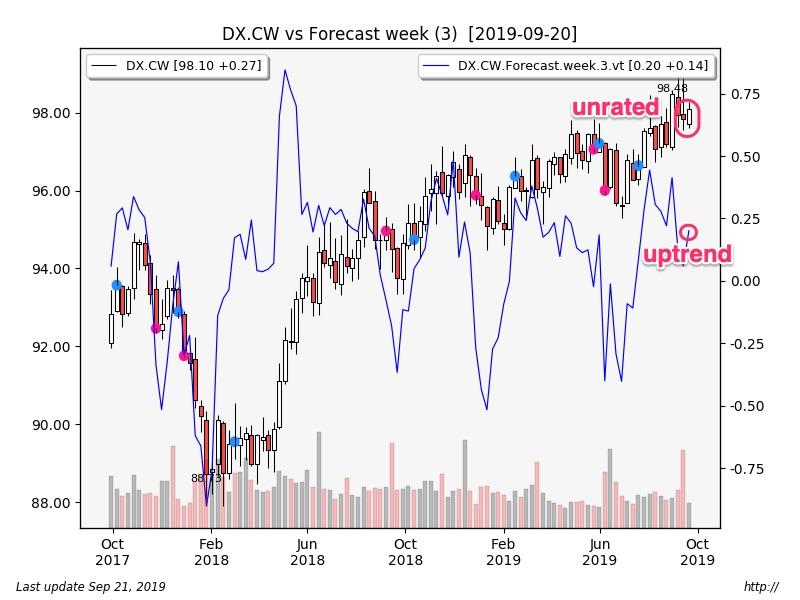 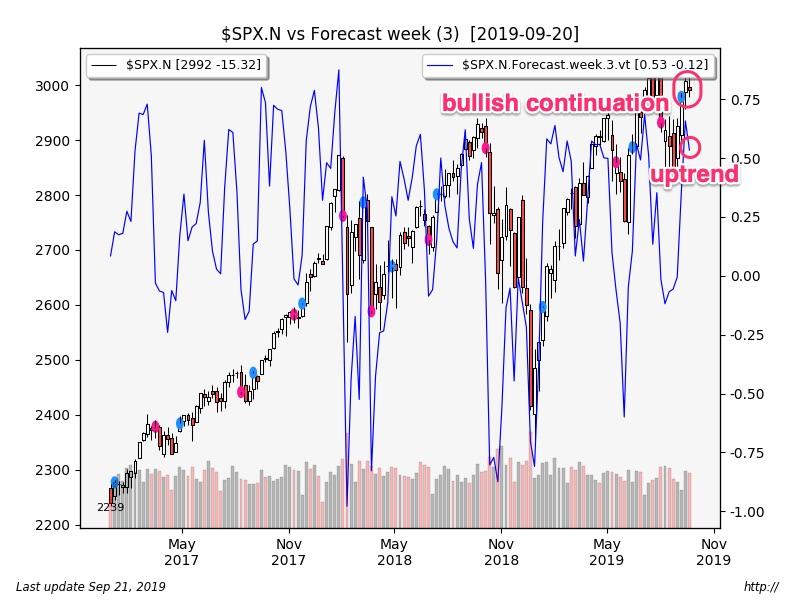 Discretionary and industrials led the market lower, while utilities and REITs were strongest. This is bearish – you never like to see utilities & REITs at the top – with more than a hint of trouble in the trade talks. Copper’s plunge this week supports the trade-talk concern too.

The US was the second-worst performing equity market this week; Latin America was on top.

TLT jumped higher this week, rising +3.92%, climbing 5 days out of 5. Forecaster ended the week in an uptrend. The 30-year yield fell -21 bp on the week, which is a fairly strong weekly move. Even so, TLT has not yet recovered all the fairly dramatic losses suffered during last week’s big move.

TY rose +0.97%, but the bullish harami print was a bearish continuation, and forecaster moved lower into a mild downtrend. Daily forecaster moved back into an uptrend on Tuesday; TY ended the week in an uptrend in the daily and monthly timeframes. Just looking at the monthly chart, it appears that the bond uptrend remains in place.

DGS10, the 10 year yield, fell -17 bp to 1.73% this week. The bearish harami was quite bearish (49%) and forecaster moved lower but remains in a very weak uptrend. The monthly DGS10 chart remains in a fairly strong downtrend. 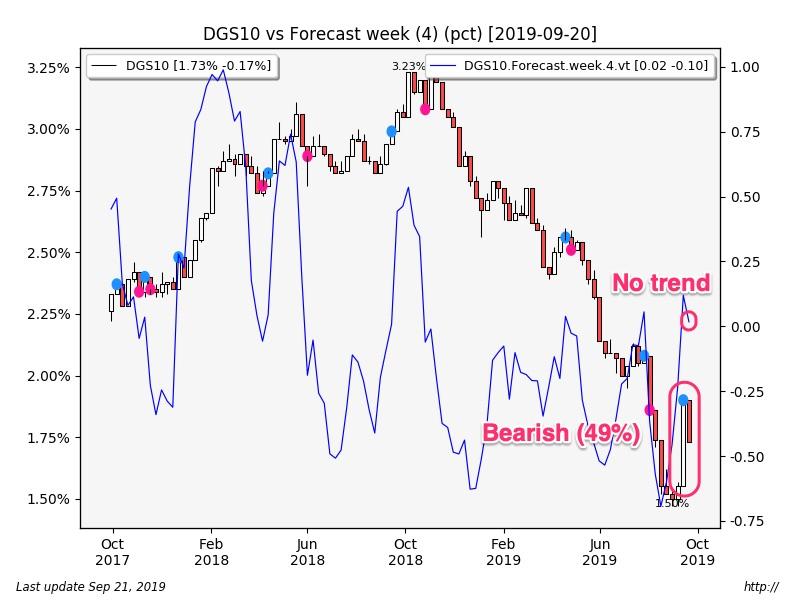 JNK rose +0.36%; in spite of that, JNK daily tipped over into a slight downtrend on Friday. BAA.AAA differential rose +2 bp to +89 bp; it was a small move higher – by and large, there are few worries from the credit markets about low quality debt.

Crude jumped +3.53 [+6.45%] to 58.22. All the gains came on Monday’s huge rally, some of which was subsequently retraced on Tuesday – all driven by the attack on the Saudi oil refinery which knocked 5.7 mbpd offline for an unknown amount of time. The Saudis on Tuesday suggested the downtime will be brief – but who knows what the truth actually is. The weekly shooting star candle was bearish (37%) but forecaster moved higher into an uptrend. Crude ended the week in an uptrend in the weekly and monthly timeframes. 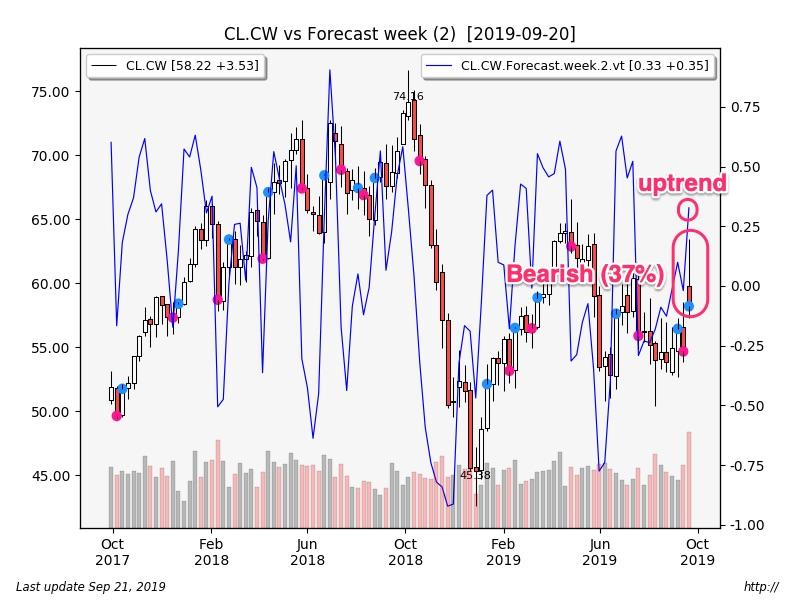 * Premium for physical (via Bullion Vault: https://www.bullionvault.com/gold_market.do#!/orderboard) vs spot gold (loco New York, via Kitco: https://www.kitco.com/charts/livegoldnewyork.html) shows no premium for gold, and a 7 cent premium for silver.

The main event this week was the aftermath of the successful attack on the critical Saudi oil facility that took 5.7 mbpd offline for an as-of-yet undetermined amount of time.  As a result, crude is now back in a reasonably strong uptrend. This overshadowed the Fed’s 25 bp rate cut (with allegedly no more to come), and the mini-disturbance in the US-China trade talks when the negotiators cut their trip short for reasons unknown. Nobody really noticed the strong INDPRO report.

Bonds rallied along with gold, silver, and especially the mining shares. Was this just a bounce after a big sell-off last week? Or was this an impending return to the longer term uptrend for the safe havens? If we go with the monthly charts, all those items remain in uptrends. For now, it is probably wise to go with the trend in place.

Big bar gold premiums on gold remain low, and ETF discounts were mixed. There is no shortage of gold or silver at these prices.

The COT reports show that gold remains at or near a long-term high, while silver looks to be at a intermediate high.

Now that the ECB and Fed meetings are past, the things on the schedule to watch are BRExit, and the US-China trade negotiations. Wild card is Iran v Saudi Arabia, and the larger Sunni/Shia conflict.

There are two positive BRExit outcomes that bear thinking about. The first is a negotiated BRExit that passes Parliament, which is now a possibility with the new flexibility that the EU is showing. The second is an initial no-deal BRExit that causes both the UK and EU to hastily conclude a deal that addresses the new reality in a realistic and pragmatic manner. Either of these outcomes would be distinctly Euro-positive, and thus probably gold-negative. All things come to an end, and the end to the BRExit saga appears to be coming up in the next 4-6 weeks.

Likewise, a positive outcome in the US-China trade deal would be dollar-positive, and gold-negative. It would also probably impact the chances of further Fed rate cuts.

Worst case for gold: a negotiated BRExit that passes Parliament, followed by a US-China trade deal.

Best case for gold: a no-deal BRExit with lots of acrimony, followed by a breakdown in US-China trade relationship. This probably causes ECB money printing, a flight out of the Euro, and new highs in gold, US treasury bonds, and the buck.

“Thomas Cook had been scrambling over the weekend to avoid collapse after the Royal Bank of Scotland and a range of other banks demanded that Thomas Cook Group PLC find £200 million ($250 million) in funding by this upcoming week.”

“The development comes after a tumultuous year for Thomas Cook. Since May 2018, shares have fallen by more than 96% amid Brexit uncertainty and intense competition in the tourism sector. “

Any comments about today’s gold volume? My trading app shows it as ridiculously high. Is this just a glitch on my app or are we seeing some committed buying?

I don’t see anything out of the ordinary on my charts.  Look at stockcharts; $GOLD’s volume was decent but not crazy.  Looks like a modest breakout to me.

Must just be my app then, it showed Monday’s volume double that of Friday’s