The market-moving news this week was the Trump administration announcing the delay on imposing some of the 10% tariffs on Chinese imports through December 15th. This caused relief rallies in risk assets, as well as a top in gold and silver. Bonds were not convinced, however.

This week’s metals sector map shows gold/Euros in the lead, due to the dollar rally.  Gold led silver, and the metal did better than the miners.  In fact, the miners all dropped fairly hard. Both copper and platinum also turned down. The miners have all dropped below the 9 MA. The dropping miners, plus gold leading silver, suggests that a metals correction might be in the offing.

Gold climbed +16.13 [+1.07%] to 1524.67 this week. This is another new 6-year high. The long white candle was a bullish continuation, and forecaster jumped higher into what is now a very strong uptrend. Gold remains in an uptrend in all 3 timeframes.

Gold/Euros rallied for a 12th straight week; as you know, the all-time high for gold/Euros is 1391, set back in September 2012. Gold/Euros closed the week at 1374, only 17 Euros away from the high. Gold/Euros remains in an uptrend in all 3 timeframes too.

The COT report showed very little change in either commercial or managed money positioning. Commercial net remains at near-historically low levels, which is consistent with a top in gold. Just like last week, and the week before. 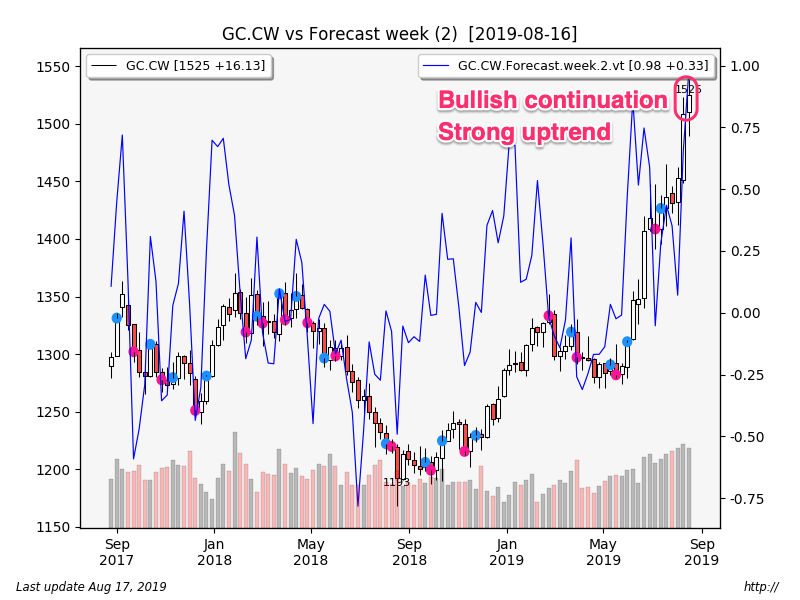 Silver rose +0.15 [+0.88%] to 17.20 this week. The long white candle was a bullish continuation, and forecaster moved higher into a strong uptrend. Silver had an especially large trading range on Tuesday – a breakout to new highs, followed by new lows after the tariff delays were announced, and then finally a recovery back to mostly-flat again. Silver remains in an uptrend in all 3 timeframes.

COMEX SI open interest fell -1,436 contracts on Friday, and -10,423 contracts for the week. That is 21 days of global production removed this week – a lot of short-covering in silver, it would seem.

The silver commercial net rose +10k contracts, which was +7.9k new longs, and -2.1k fewer shorts. The managed money net fell by -12.9k contracts, which was -10.7k fewer longs and +2.2k new shorts. Those are some reasonably large-sized changes, especially the long buying by the commercials. Silver is backing away from its “high” without seeing any real correction in price. Its a bit soon – but maybe no top for silver from the COT perspective? 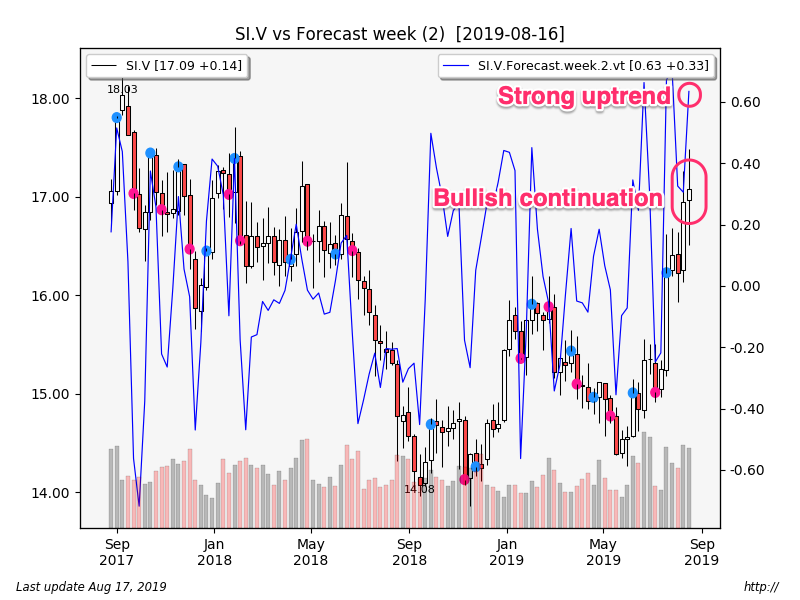 Miners fell all week long, with XAU losing -3.07%. The dark cloud cover was somewhat bearish (38%), and forecaster fell but XAU remains in a slight uptrend. XAU daily dropped into a downtrend on Tuesday after news of the tariff delays hit, and never really recovered. XAU ended the week in an uptrend in the weekly and monthly timeframes. 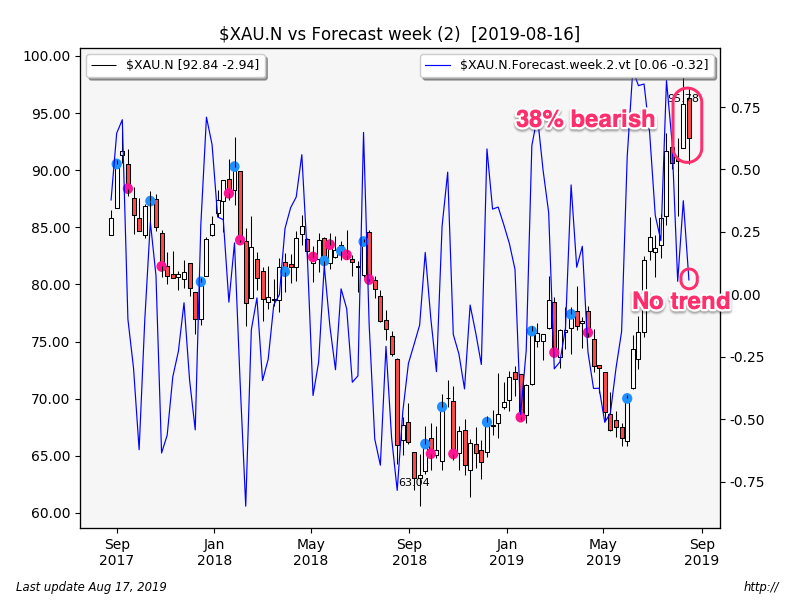 The buck rose +0.65 [+0.67%] to 97.72. The rally started following Tuesday’s tariff delay, and continued through end of week. The long white candle was neutral, while forecaster moved higher, enough to pull the buck back into a weekly uptrend. The buck is back in an uptrend in both daily and weekly timeframes. This was a new weekly closing high for the dollar – mostly that was about weakness in the Euro. 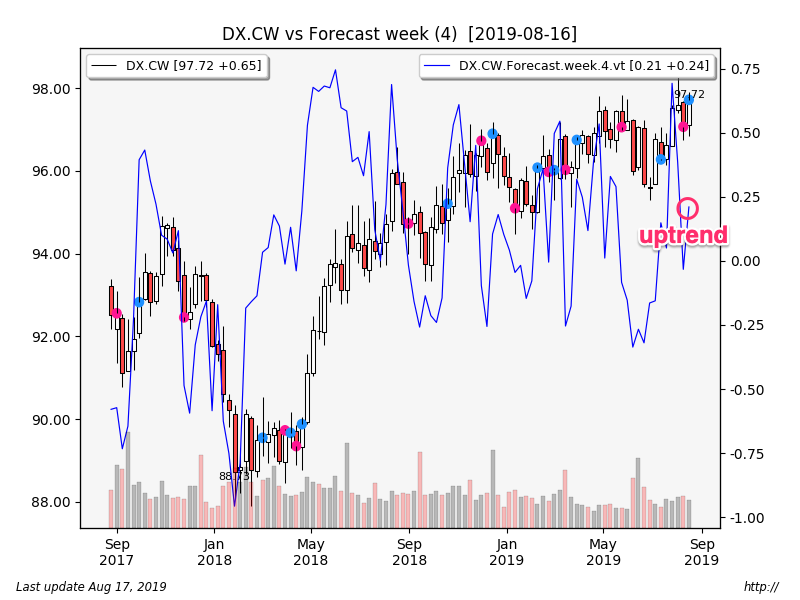 SPX fell -29.97 [-1.03%] to 2888.68. Trading was choppy all week long; the tariff delays resulted in a rally, which was unwound the very next day. The long black candle was a bearish continuation, and forecaster inched higher but remains in a slight downtrend. Friday’s swing low print was bullish (48%) and pulled the daily forecaster back into an uptrend. SPX is now in an uptrend in both daily and monthly timeframes, but all of the trends remain quite weak. SPX could go either way at this point. 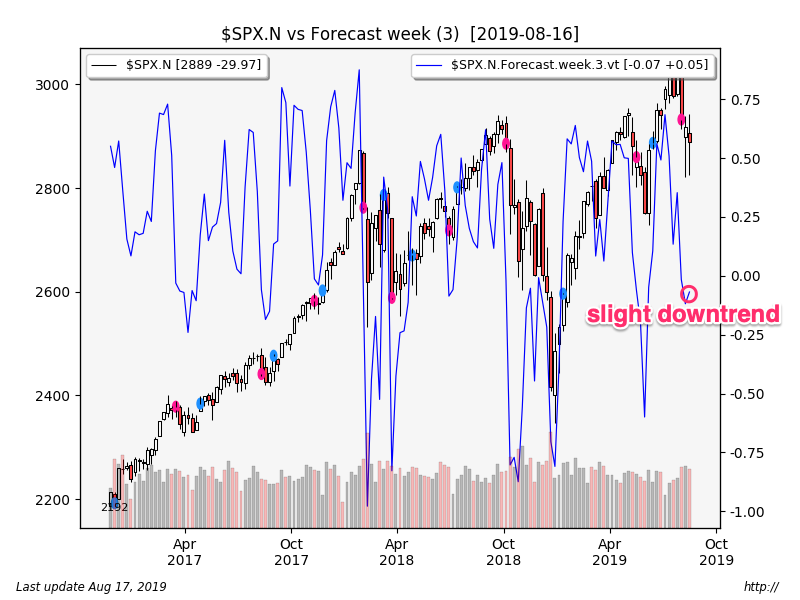 US equities were #3 this week; Latin America was weakest.

TY rose +1.05%, making another new high. The long white candle was mildly bearish (34%), but forecaster moved higher and remains in a reasonably strong uptrend. TY remains in an uptrend in all 3 timeframes. TY did not particularly buy the excitement of the “tariff delay” rally on Tuesday.

DGS10 (the 10-year yield, inverse of TY), plunged -20 bp to 1.54%. The black marubozu was a bearish continuation, and forecaster moved lower into a strong downtrend. DGS10 remains in a downtrend in both weekly and monthly timeframes. The series low for DGS10 was set back in mid-2016 at 1.37%. At the current rate of decline, we are basically there next week.

The 30-year yield plunged -26 bp, ending the week at 2.00%, a new all time low for this series. Money is flooding into longer term debt – with the preference for the 30 year. Last time it did this was back in October of 2008. While the market environment isn’t even close to the same (no Lehman panic, for one) the move does indicate that very large bets are being made on declining interest rates, and the 30-year is the item that will move the strongest during that environment. 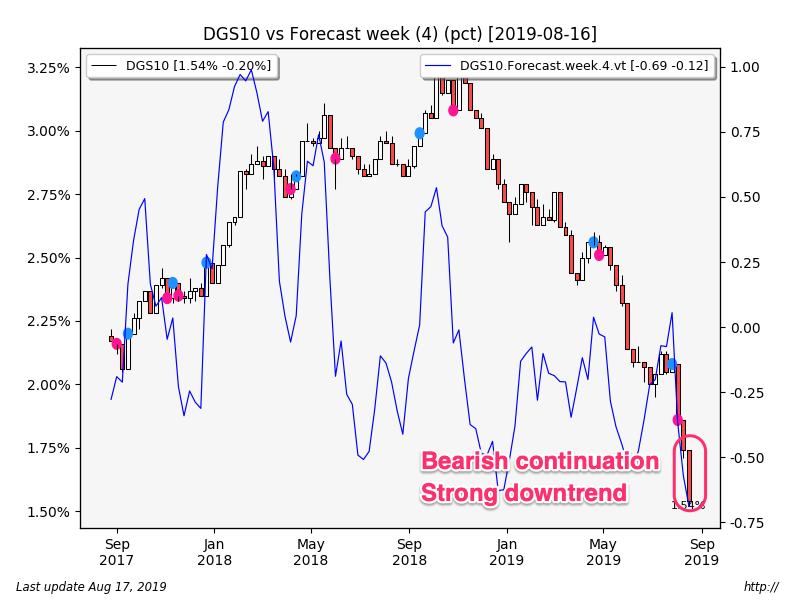 JNK fell just -0.11% on the week. Like equities, trading was choppy, with junky debt rallying Tuesday, then selling off Wednesday. Forecaster ended the week in a slight downtrend.

BAA.AA differential rose +1 bp, ending the week at +89. The swing low print was bullish (58%) but forecaster only inched higher and remains in a strong downtrend. In spite of the rush into the 30-year bond, crappy debt remains well bid. This remains a perplexing signal – “things are different this time.” In 2008, the differential screamed higher when money rushed into the 10-year treasury, because money was worried that crappy debt would default during the upcoming recession.

But now? Nothing. Nobody is worried about crappy debt defaulting. In fact, money is flooding into BAA debt just as fast as it is into the 10-year treasury. That’s the world we live in, deformed by central banks. Weak, failing companies are kept alive by central bank action. This “saves the economy” in the short term, but assures that the zombies won’t fail and make space for better-performing competitors.

Capitalism? We can’t have it without the possibility (and discipline) of failure. The chart below is showing us the effects of “zombie company corporate welfare” provided by the central banks, most especially the ECB. 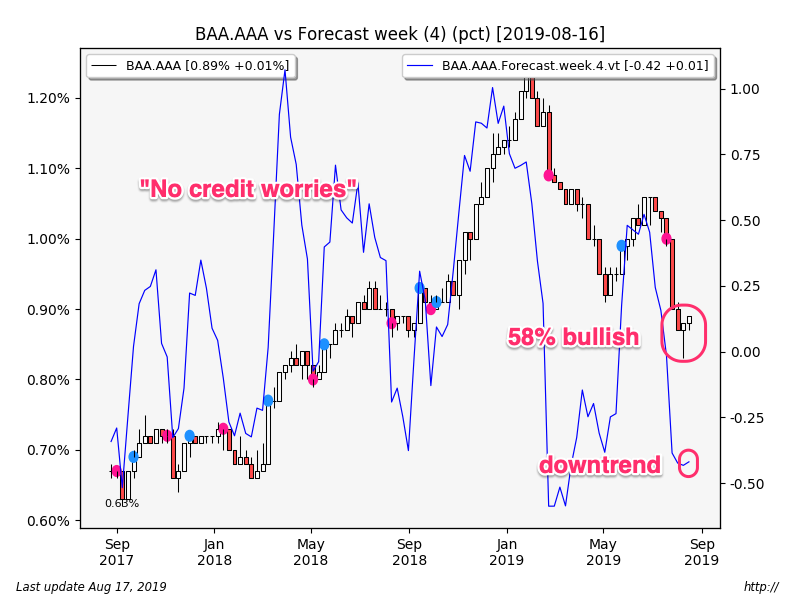 Crude rose +0.68 [+1.26%] to 54.68. Tuesday saw a large rally following the tariff delay, but then reversed on Wednesday, giving back almost all its gains.  The EIA report was slightly bearish (crude: +1.6m, gasoline: -1.4m, distillates: -1.9m) but this wasn’t what caused crude to sell off on Wednesday.  The high wave candle was a bearish continuation, and forecaster moved higher, but remains in a slight downtrend. Crude ended the week in a downtrend in both daily and weekly timeframes, but the trends remain quite weak. 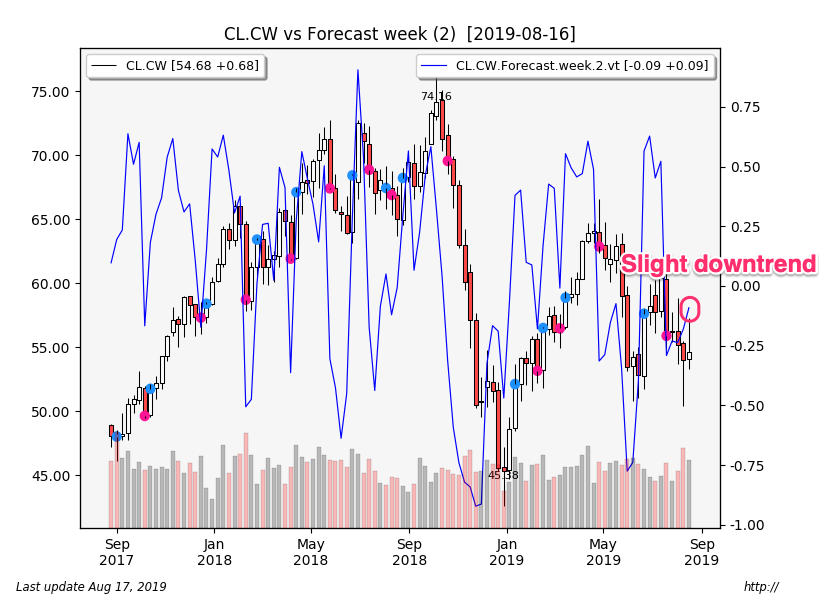 * Premium for physical (via Bullion Vault: https://www.bullionvault.com/gold_market.do#!/orderboard) vs spot gold (loco New York, via Kitco: https://www.kitco.com/charts/livegoldnewyork.html) shows a $2 premium for gold, and a 5c premium for silver (London).

Retail sales are fine, but manufacturing continues to decline. Europe looks especially bad. My INDPRO forecaster is pointing at further declines ahead. That’s not a good sign.

Two weeks ago, 10% tariffs on everything from China.  This week, tariffs-delayed.  “We were just kidding.”  Regardless of the walkback, bonds continued to make new highs – the 30 year made a new all-time high.  Bonds seem to be marching to the tune of a different drummer.  The move in longer-dated issues was so violent, the yield curve inverted once again.  Manufacturing data continues to get worse, while – somehow – retail sales remains positive.   Meanwhile, money flooded into low-quality debt!  That’s anticipated central bank deformation at work – that’s the only explanation I have for such a counter-intuitive move.

The buck also continued moving higher, as did gold.  The miners looked weak – perhaps dragged lower by falling equity prices, and perhaps also pulled down by goldbugs looking to cash in on a massive mining share gain that (in the past seven years, at least) has proved to be very ephemeral.  Miners up 100% one month, down 100% the next.  Anyone remember 2016?  I sure do.

Here’s a mining share table: note that some of them are up more than 100% over the past 52 weeks.  Is it any surprise they are feeling some selling pressure?

Big bar gold premiums on both gold and silver were unchanged, and ETF discounts increased, except for PSLV, which improved. No shortage in gold and silver at the moment.

The COT report for gold hasn’t changed – it is near historic levels, which usually indicates a top – while silver’s COT has retreated somewhat.  I’m not entirely sure what that means.  Does it mean an interim high for silver is now in progress?  Perhaps.  That would line up with what the miners are doing.  But the charts don’t support this outcome; silver is not showing a near-term top.

Rick Rule had a potentially valuable suggestion from his KWN interview.  His suggestion comes at the very end (“I listened to it, so you don’t have to”): he observed that in previous PM rallies, gold moves first, silver moves second, and the thing that moved the most was silver stocks, because they are so volatile and so rare. If you are looking for a good speculative opportunity, let’s see how did he put that? “Putting together a portfolio of high quality silver Names might, just might, for some amount of your portfolio, yield you the type of gains that would offset the risks that you would have to take…”  Or something like that.

I suspect Rick’s statement is not intended as investment advice.  But the man has been around forever, and he has forgotten more than I will ever know.  I suspect he is talking his book.  Even so…

Coincidentally, I do happen to own a few silver miners…so I’m talking my book here too…

According to this article, the former CEO of Cathay turned the airline around over the past two years, taking the airline from loss to profit.  Supposedly he was well-respected and capable.   Now he is gone, because the chairman (not the CEO) made the mistake of saying this:

Only two Wednesdays ago, Cathay chairman John Slosar remarked at a press conference: “We employ 27,000 staff in Hong Kong doing all sorts of different jobs … we certainly wouldn’t dream of telling them what they have to think about something.”

My guess: the previous CEO was doing what he thought was best for his organization.  He knew that the Hong Kong employees were very supportive of the protests, and he thought that maintaining morale was a top concern: productivity, profitability, turnaround, good management, etc.  He was doing what he felt was right for his company.

Sadly, he was wrong.  He blew it.  Listening to his employees, taking their thoughts and feelings into account – not the right thing at all.  What he needed to do was toady up to his political overlords, crack down on the staff, tell them what to think, and fire them if they demonstrated any deviation from appropriate speech or thought.

Then he would have been fine.

This is the Hong Kong-Beijing clash in microcosm.  Ultimately, it is a culture clash.  Of course since Beijing has the guns, they will win the power struggle.  However I believe that Beijing will win the battle, but ultimately they will lose the war.  Based on what happened at Cathay, I predict that, 27 years from now Beijing will get a hollow shell of what was once a very successful, thriving city.  The best – those who can – will flee and enrich other places.  Only the toadies will remain, and the city will sink into bland, subservient mediocrity.  I’m sure this discussion happened back in 1997, but back then it was conjecture.  Now we see the reality.

Win the battle, lose the war.  Cathay Pacific is showing us the future of Hong Kong.