The Nonfarm Payrolls report was the cause of the big moves on Friday; the vast majority of all the price moves came following the release at 8:30 am. Put simply – the report was not recessionary.  More on that later.

Palladium was the star performer this week, making a new high and remaining in a strong uptrend. Gold/Euros did well also, moving higher, and remaining above all 3 moving averages. In the rest of the group, silver led gold lower, while the miners were mixed – seniors outperformed the juniors. The decent miner performance suggests the gold correction is not a serious one – likewise, the rally in gold/Euros tells us that gold’s plunge was a currency effect.  How’s that palladium rally: 66% move over the past 52 weeks.

Gold fell -9.58 [-0.68%] to 1408.67. The weekly doji candle was neutral, but forecaster was hit hard, plunging into a slight downtrend. Daily also printed a swing high on Friday (48% bearish), and forecaster dropped into a downtrend on Thursday. Gold is now in a downtrend in both daily and weekly timeframes. Gold/Euros did much better; it avoided a weekly forecaster reversal; it is in an uptrend in both weekly and monthly timeframes.

The July rate-cut chance ended the week at 5% and the Dec 2019 rate-cut chance closed at 100%, with an 88% chance of 2 rate cuts, and a 46% chance of 3 rate cuts. That’s a big decrease over last week, and probably driven by the positive payrolls report.

No COT report due to the July 4th holiday. 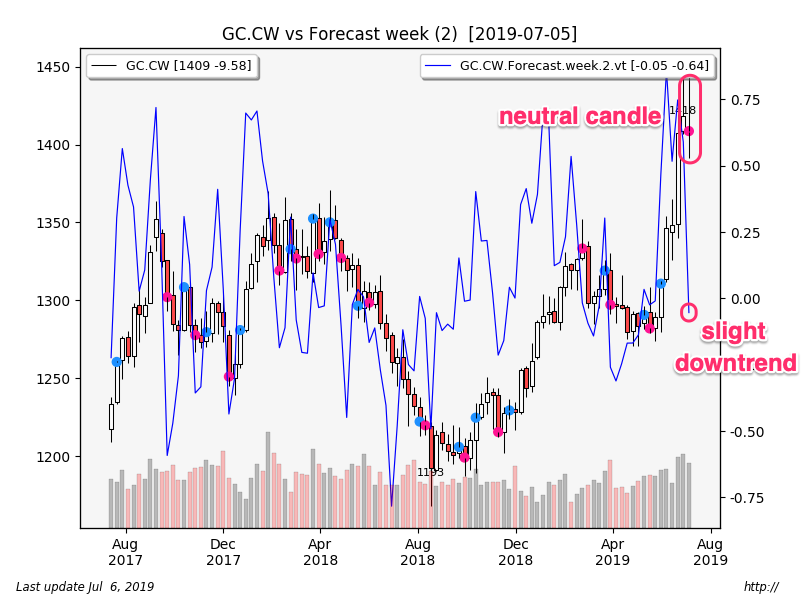 COMEX SI open interest rose +390 on Friday, and +4,202 contracts this week – about 9 days of global production in new paper. 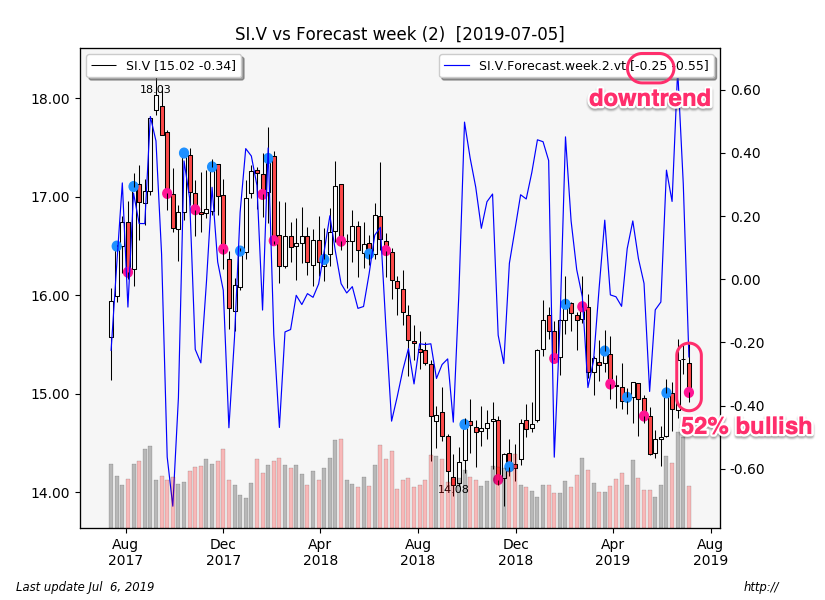 Miners moved slightly lower this week; XAU fell -1.13%, the weekly high wave candle print was a bullish continuation, and while forecaster fell, it remains in an uptrend. The daily forecaster dropped into a downtrend on Friday, but the takuri line candle print was very bullish (52%); while both gold and especially silver sold off hard, the miners fell for only 30 minutes, and then they rallied strongly for the rest of the day. It was a very good performance for the miners on a day with silver down more than 30 cents. XAU ended the week in an uptrend in both the weekly and monthly timeframes. 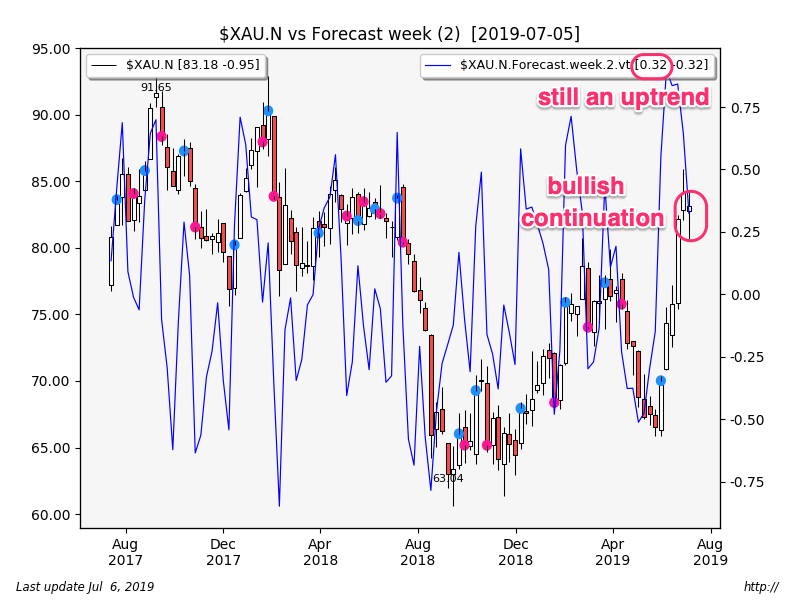 The buck rose +1.18 [+1.23%] to 96.78. Big moves came on Monday (following the Trump-Xi meeting at the G-20) and Friday (following Payrolls). Right now, the linkage is, “good news” => a dollar rally, and a plunge in gold, most likely because both the buck and gold are tied to the expectation for rate cuts. The weekly swing low was very bullish (78%), but forecaster just moved slightly higher, remaining in a mild downtrend. Daily forecaster moved into an uptrend on Tuesday following Monday’s big rally. This leaves the buck in a downtrend in both weekly and monthly timeframes – but that monthly forecaster is right on the edge of a bullish reversal too.  More good news will probably keep that buck moving higher still. 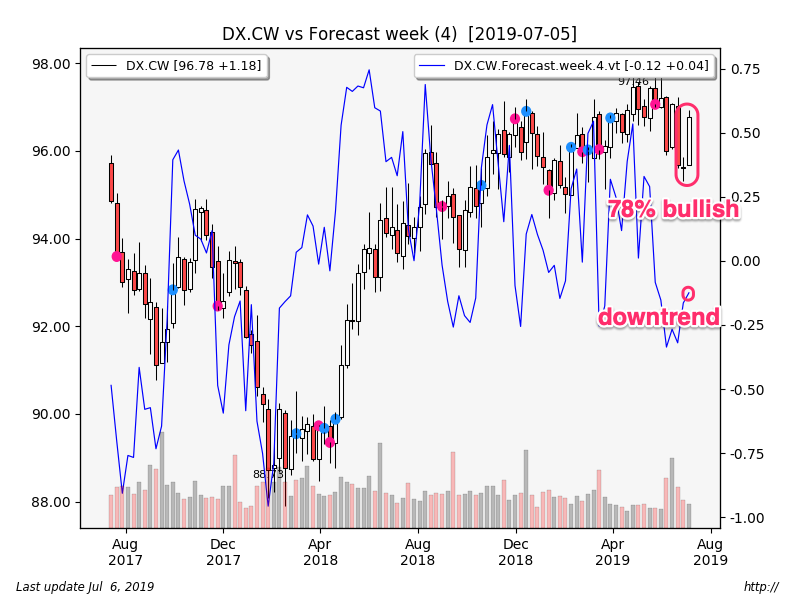 SPX rose +48.65 [+1.65%] to 2990.41, with SPX making a new all time high on Thursday. The weekly short white candle was a bullish continuation, and forecaster moved higher, putting SPX in a strong uptrend. SPX is in an uptrend in all 3 timeframes.

Sector map has telecom and tech in the lead, with defense and industrials doing worst. That looked somewhat bullish to me – tech near the top is generally a good sign.

The US equity market was #2 this week, with Latin America in the lead.

TY fell -0.25%, the weekly doji candle was mildly bearish (34%), and forecaster moved sharply lower, but remains in an uptrend. The large plunge on Friday [-0.53%] resulted in a daily swing high (62% bearish), and daily forecaster dropped into a downtrend. This leaves TY in an uptrend in both weekly and monthly timeframes.

DGS10 (inverse of TY – the 10-year yield), rose +4 bp to 2.04%; but on the way, it made a new low to 1.95%. The big move higher in yield came on Friday, with the 10-year jumping +9.5 bp in just one day, as a direct result of that payrolls report. The weekly piercing candle print was bullish (53%) and and forecaster moved slightly higher but remains in a downtrend. The 10-year yield remains in a downtrend in both weekly and monthly timeframes. Is this 1.95% print a low for yields? If the economy gets better and we start to see some more happy numbers like we did in Friday’s payrolls report, I suspect yields will move rapidly higher. 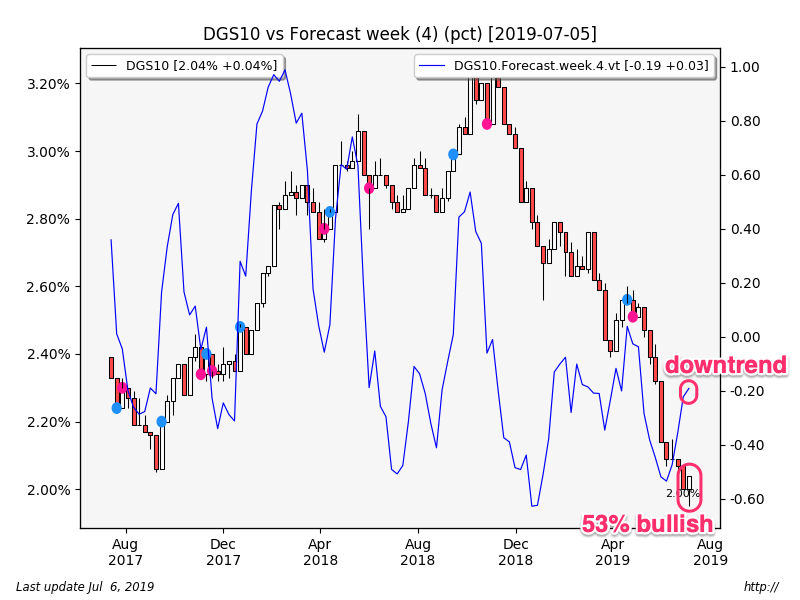 JNK fell -0.30%. It was a bit odd to see JNK fall, in the face of a strong rally in equities and a plunge in the 10-year. BAA.AA differential fell -2 bp, dropping down to 1.04%, and forecaster fell also, but it remains in a modest uptrend. No signs of credit distress at the moment.

Crude fell -0.45 [-0.77%] to 57.79. Most of the damage happened on Tuesday – probably something to do with Venezuela’s production increasing by 26% this month due to sales to China. The EIA report was mildly bullish (crude: -1.1m, gasoline: -1.6m, distillates: +1.4m), which had just a momentary bearish effect on prices. The weekly candle prints were both bullish and bearish – call it neutral – and forecaster edged lower but remains in a strong uptrend. Daily forecaster tipped over on Monday, and ended the week in a mild downtrend. That left crude in an uptrend in both weekly and monthly timeframes. 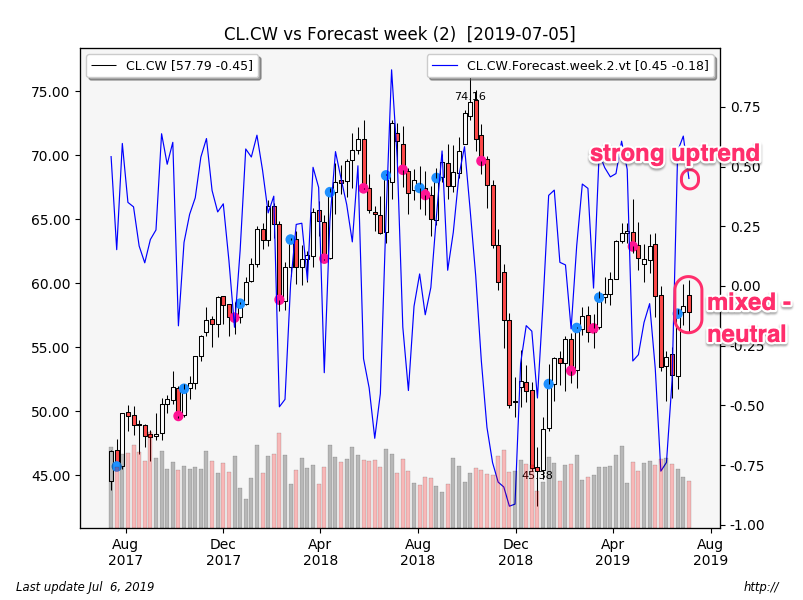 While the manufacturing numbers look a bit weak, services look somewhat better, and the payrolls data looks quite strong. No recession.

This week was dominated at the start by the Trump-Xi rapproachment over the weekend, and at the end by Nonfarm Payrolls, both of which were viewed as being positive for the economy, reducing the chances of rate cuts by the Fed. This caused a strong dollar rally, and a drop in gold, the miners, and most especially silver, which moved to yet another 27 year high in the gold/silver ratio on Friday of 93.72!

But even with all the good economic news, gold managed to hold above 1400, the miners printed a strong-looking reversal which tells us that buyers jumped at the chance to buy the miners at a momentary discount, and even poor, beaten-down silver managed to close above 15. Poor silver. And we can see from gold/Euros performance that the move down in gold was all just a currency effect, as gold/Euros actually rallied this week.

Big bar gold premiums on both gold and silver rose, while ETF discounts mostly decreased. Premiums rising, and discounts falling when prices drop are a sign of accumulation in the “real metals” space. Physical buyers are also “buying the dip”.

No COT report due to the July 4th holiday.

So far – at least according to my data – the recession remains in the future. Manufacturing has picked up slightly, services have slowed, but the economy remains above stall speed. That’s true domestically anyway – I don’t follow things overseas as closely as I should, as there is just not enough time in the day.

Will the US avoid war with Iran? Is there enough common ground (and freedom of maneuver for Xi) between the US and China for some kind of trade deal to come together? So far, the futures markets are projecting no July rate drop. At some point, failure of the Fed to deliver a rate decrease and/or the continuing ability of the US economy to dodge a recession could cause a major kerfuffle in the bond market. Bond yields at 2% only make sense if a recession is just around the corner.

All we can do is await the next set of data. While we do, we should probably take note of the fact that gold, regardless of the very strong dollar rally, remains above 1400, and the miners continue to be very well bid. Premiums on the big bars are slowly rising, ETF discounts are declining – all the signs are there that money continues to flow into gold.  In spite of all the good news.

I hate to say “silver is a good deal” here at 15. I mean, it is, but, still. You are probably really tired of hearing this. Premium for PSLV, the physical ETF over at Sprott, has almost disappeared.  27-year highs in the gold/silver ratio will eventually matter.  When?  I have no idea.

In a future fiction novel I might write, the hero of the story loses their phone and doesn’t have a watch….but a quick glance at a TV playing CNBC which is showing a gold chart tells them instantly where they are in reference to 8:00 a.m. 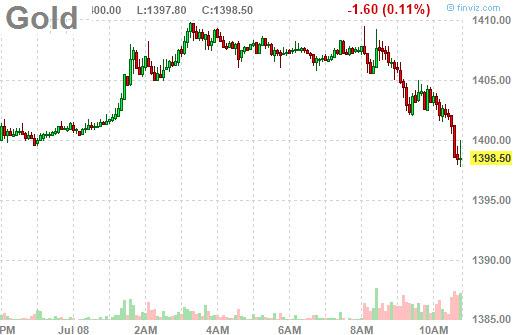 Yeah I have to say that all looks pretty odd.  The selling in gold doesn’t correlate with anything else.  Just a bunch of selling starting at 8am.  It looks like “whoever it is” wants gold below 1400.

Funny though – the miners are green.