This week we again see silver leading gold higher, juniors leading seniors, and the miners leading the metals. This is the second week of a standard bullish PM configuration. Palladium once again was at the bottom of the pile.

Gold rose +10.35 [+0.73%] this week, making another new weekly closing high. The spinning top candle was bearish (45%) but forecaster moved higher, moving gold into a moderately strong uptrend. Gold ended the week in an uptrend in all 3 timeframes. While the Gold/USD chart looks good, Gold/Euros is even better – it shows 8 straight weeks of rally in gold. If you factor out the currency effects, gold is just steadily chugging higher.

The July rate-cut chance is 100% for one cut, and 23% for two cuts; the Dec 2019 rate-cut chance closed at 100% for one cut, 92% chance of 2 rate cuts, and a 60% chance of 3 rate cuts. That’s just a small change over last week. During the week, there was a jump in speculation for 2 rate cuts at the upcoming Fed meeting, driven by some hints from Fed officials that cutting rates in advance of bad economic news was good practice. When the market responded, the Fed quickly walked that back. “We were just talking about history.” The Friday walkback may have helped gold to sell off, as well as helping the buck to rally.

The COT report showed little change in the commercial net; commercial shorts rose +11k, but commercial longs rose by +12k also. (with commercial sorts at near-historic highs). Managed money net also changed very little, with shorts rising +5.6k, and the longs also rising +3k too. If we just look at commercial shorts, we are at or near a major top in gold. 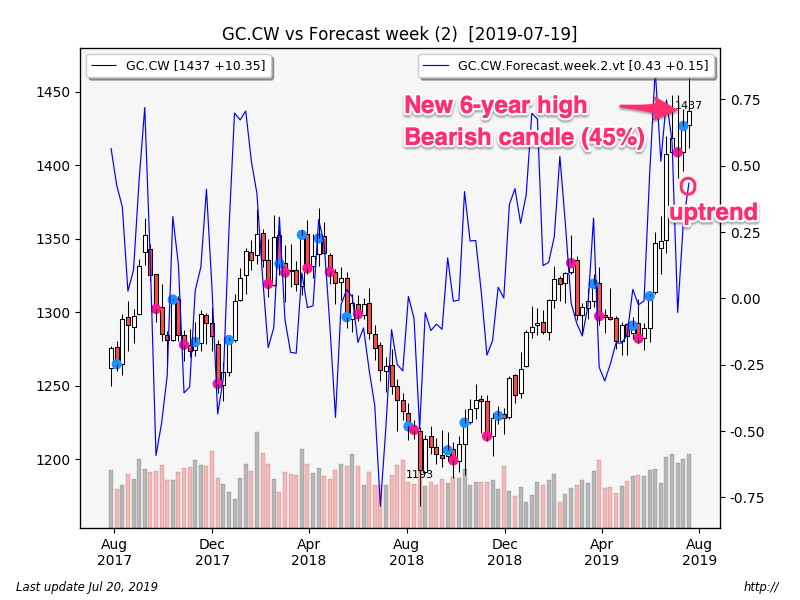 Silver rallied +0.98 [+6.43%] to 16.23. The strong line/opening white marubozu was bearish (66%), but forecaster jumped higher into a very strong uptrend. Friday’s drop (a large spinning top) was not a reversal – it was a bullish continuation, and while daily forecaster dropped, it remains in an uptrend. Silver ended the week above the previous high of 16.20. Silver remains in an uptrend in all 3 timeframes. 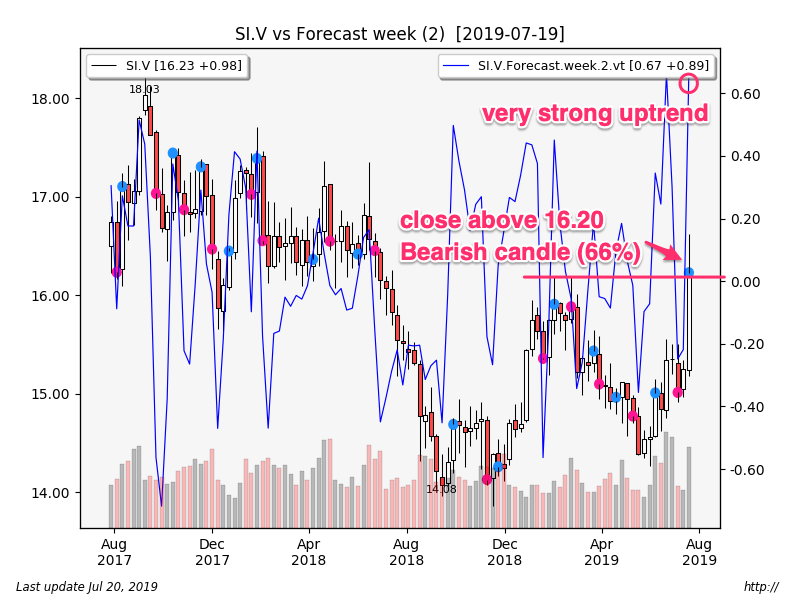 Miners rallied +6.83% this week, breaking above a previous high. The long white candle was bearish (68%), but forecaster jumped higher into a very strong uptrend. XAU’s doji candle on Friday was mildly bearish (41%) but daily forecaster was unchanged; XAU remains in a strong daily uptrend. XAU ended the week in an uptrend in all 3 timeframes. 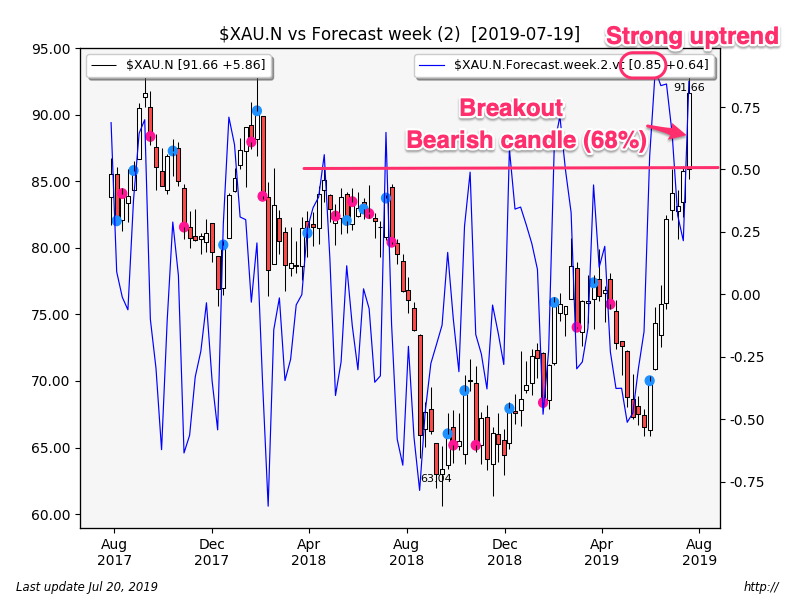 The buck rose +0.36 [+0.37%] to 96.64. The long white candle was mildly bullish (36%), and forecaster inched down but remains in a (fading) uptrend. The buck was up and down all week long, moving largely based on shifting expectations of rate cuts by the Fed. The buck ended the week in an uptrend in both daily and weekly timeframes, but none of the trends are particularly strong. 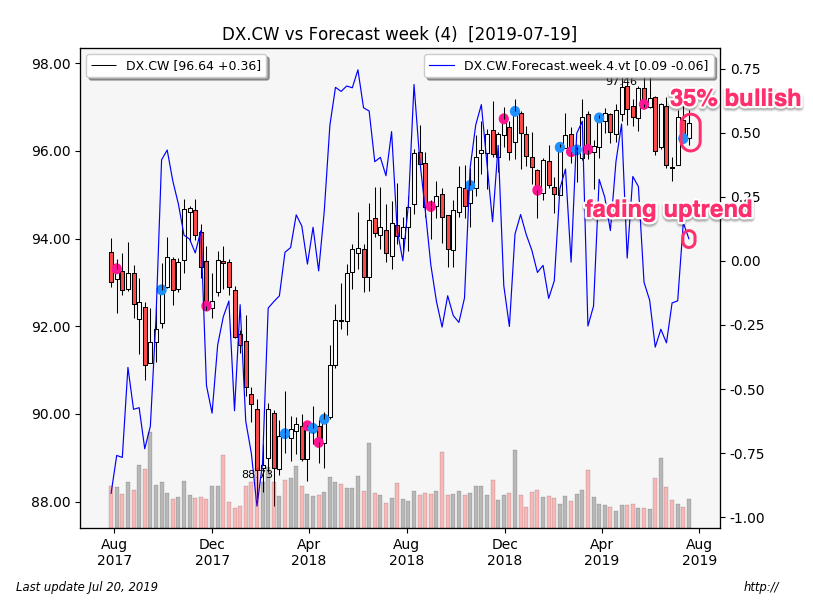 SPX fell -37.16 [-1.23%] to 2976.61. The black marubozu candle was just mildly bearish (30%), and forecaster dropped but remains in a slight uptrend. Daily forecaster dropped into a downtrend on Thursday, and Friday SPX sold off from the open through to the close, and the futures kept selling off in the after market. It was not a pretty end to the week. SPX ended the week in an uptrend in weekly and monthly timeframes. The longer term (monthly) trends for SPX remain relatively strong, but the weekly is a bit weak.

Sector map had energy and RETs leading lower, while staples and materials did best. That’s a relatively bearish sector map.

The US equity market was near the bottom this week, with emerging Asia on top – losing least.

TY rose +0.42% on the week. The long white candle is quite bearish (82%), but forecaster inched higher, remaining in a modest uptrend. TY daily moved into an uptrend on Tuesday. As a result, TY is now in an uptrend in all 3 timeframes.

DGS10 (inverse of TY – the 10-year yield), fell -6 bp to 2.06%. The bearish harami was a bullish continuation, and forecaster was basically unchanged, and remains in a slight downtrend. DGS10 remains in a downtrend in both weekly and monthly timeframes. 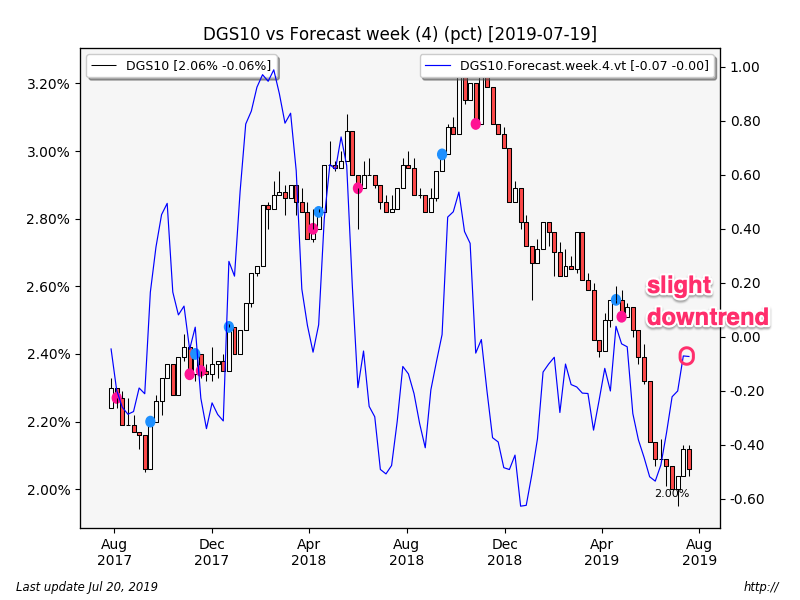 JNK fell -0.34% making a new low on Friday. Last week’s falling JNK prices could have been a hint about where equities were heading – in fact JNK has been in a shallow but steady downtrend for the past 4 weeks. BAA.AA differential fell -3 bp, dropping down to 1.00%. The opening black marubozu was a bearish continuation, and forecaster fell into a slight downtrend. The differential continues to show signs of just moderate credit stress right now. 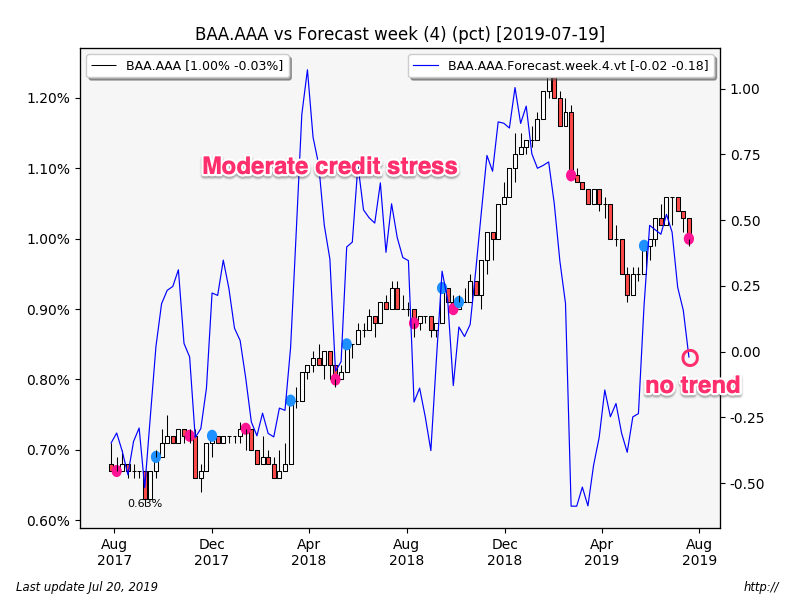 Crude plunged -4.53 [-7.50%] to 55.91. Crude dropped for 4 of 5 days. The swing high pattern was bearish (59%), and forecaster dropped hard, entering a downtrend. Crude is now in a downtrend in both daily and weekly timeframes, and the monthly uptrend is a bit precarious. The EIA report was mixed (crude: -3.1m gasoline: +3.6m, distillates: +5.7m), but the market didn’t seem to care – the decline this week was relentless, driven by projections of a glut in 2020, signs of a global economic slowdown, new pipelines opening up in the Permian – the only thing keeping crude from cratering were some geopolitical events in the Gulf. 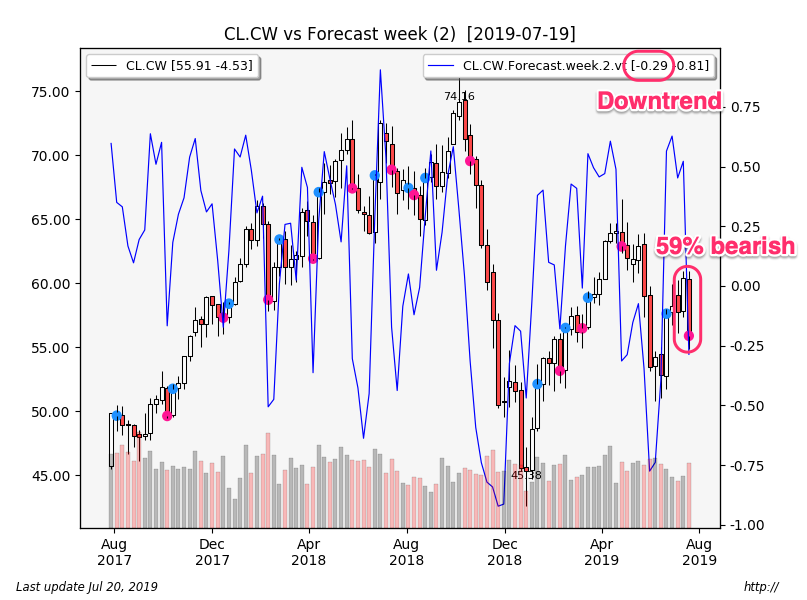 * Premium for physical (via Bullion Vault: https://www.bullionvault.com/gold_market.do#!/orderboard) vs spot gold (loco New York, via Kitco: https://www.kitco.com/charts/livegoldnewyork.html) shows no premium for gold, and a 4c premium for silver.

Retail looks good, industrial production (less utilities) is actually looking good, while housing starts looks not-so-good. Wolf Richter had an interesting article about how Chinese buyers have fled – with purchases falling to 2012 levels. Perhaps that explains the 2019 housing price swoon in spite of the plunge in mortgage rates. https://wolfstreet.com/2019/07/18/us-home-purchases-by-chinese-other-foreigners-plunge-below-2012-level-chilling-chinese-reaction-from-juwei/

Both gold and silver broke out to new highs this week, with silver looking especially strong.  Silver jumped to price levels not seen since mid-2018. Miners did even better, rising to levels not seen since 2017. Since miners tend to lead, the very limited selling on Friday suggests that sentiment remains quite bullish in spite of the strong rally.

The US-China trade talks are currently going nowhere – and the overall tone is not currently one of optimism, the Fed walked back talks of two rate cuts, but this week’s US economic data looked ok, if not stellar. And at least part of the explanation for the housing downturn could just be the flight of the Chinese buyer.

Big bar gold premiums on both gold and silver rose, and ETF discounts mostly increased. No shortage of gold or silver at this time.

The COT report still shows gold at a longer term COT high, especially when looking at commercial shorts. Silver may be nearing some sort of near-term high, but that is a lot less probable and/or a lot less severe.

Ultimately, the main driver of gold might just be over in Europe. I’m really fascinated by the gold/Euros chart – basically gold without USD currency effects.  It shows this, strong, steady rally since late 2018, with a 10-week rest starting in March, and then another 8 straight weeks higher.   When will the next “rest” occur?  The weekly RSI might give us a clue.  Currently, it is 91, which is the 7th highest weekly RSI-7 rating in history.  The higher ratings?  3 in 1980, 1979, 2005, and 2007.   This suggests that (a) we’re in a strong gold bull market, and (b) gold may be ready for a rest soon. 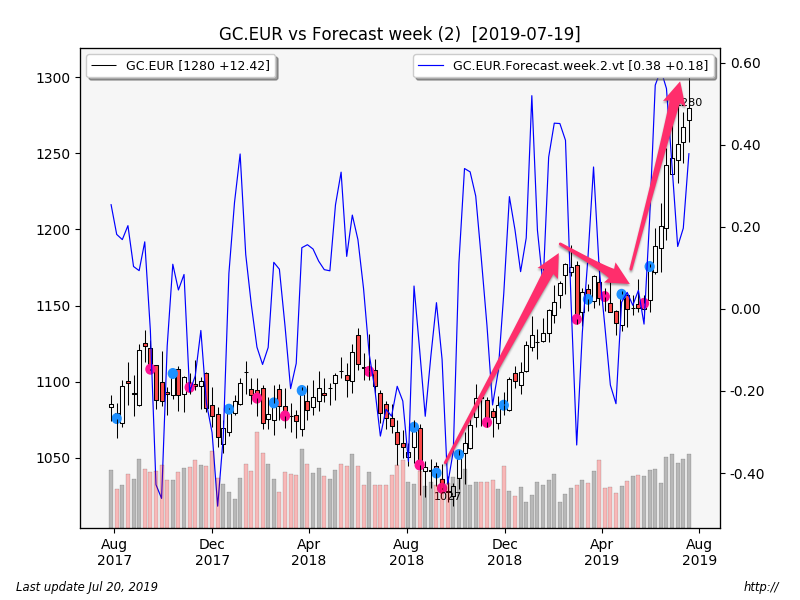