This week we see silver leading gold higher, juniors leading seniors, and the miners leading the metals. This is the typical bullish configuration for PM. Palladium did worst; after making a new all time high on Wednesday, it ended the week down.  If you like gold, you have to like seeing GDXJ at the top of this chart.

Gold rose +17.88 [+1.27%] this week, making a new weekly closing high. The long white candle was unrated, but forecaster climbed, putting gold back into an uptrend. Gold ended the week in an uptrend in both weekly and monthly timeframes. 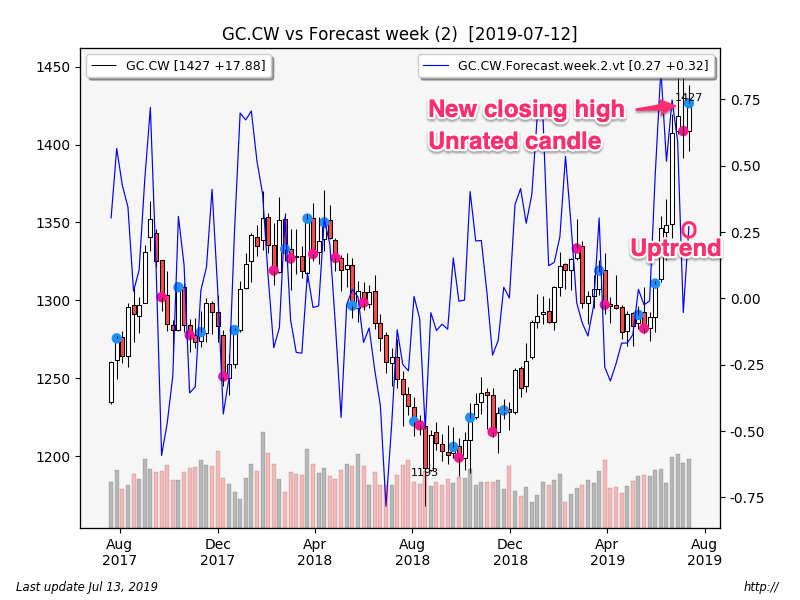 Silver rose +0.23 [+1.57%] to 15.25. The bullish harami candle print was bullish (38%), but forecaster was virtually unchanged, remaining in a moderate downtrend. Silver ended the week in a downtrend in both daily and weekly timeframes, but the downtrends are not particularly strong, and silver remains above all 3 moving averages, and it appears to have support at round number 15.

The silver commercial net remains near the low end of its 2-year range, which might be a high, but probably is not. Managed money net has not risen to a high just yet, although it is somewhat elevated. COT report for silver is a bit inconclusive at the moment. 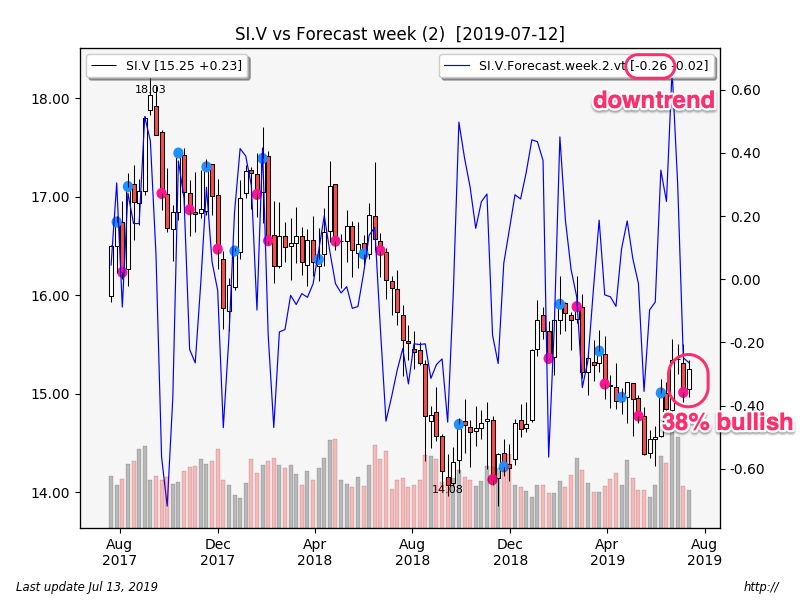 Miners did well, breaking out to a new high as well as a new closing high this week. XAU climbed +3.15%, the long white candle looked quite bearish (82%), and forecaster moved lower but remains in an uptrend. XAU ended the week in an uptrend in all 3 timeframes. XAU has moved higher in 7 of the last 8 weeks. 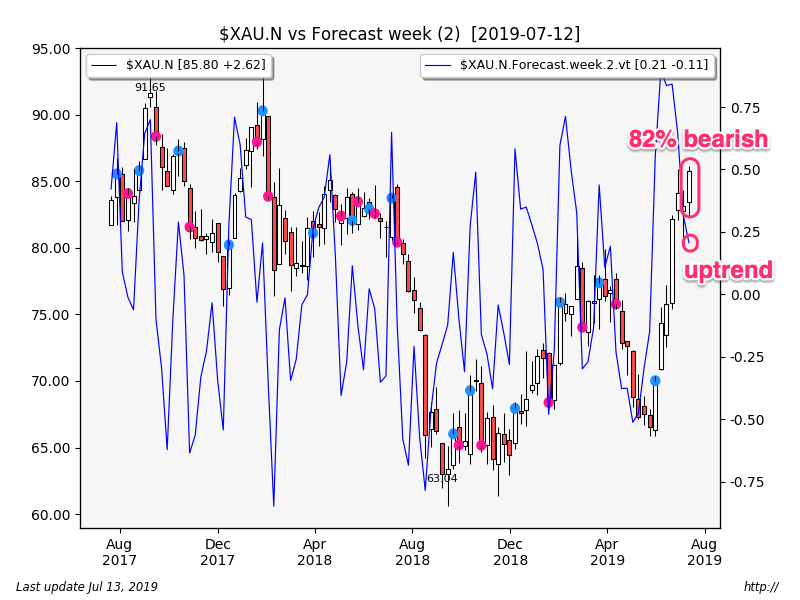 The buck fell -0.50 [-0.52%] to 96.28. The declines came following Powell’s testimony to Congress; higher prospects of a rate cut are, right now, leading directly to a falling dollar. The bearish harami was actually neutral, and forecaster moved into an uptrend. However the buck ended the week in a downtrend in both daily and monthly timeframes. My guess is that the weekly uptrend probably won’t last.  The weak buck is all about expectations for a Fed rate cut. 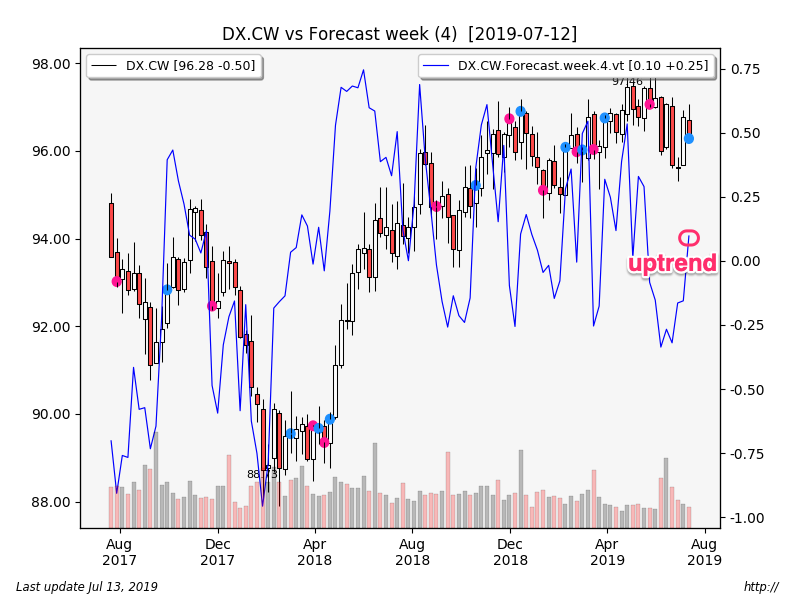 Sector map had energy and consumer discretionary in the lead, with sickcare and materials doing worst. This looked like a mildly bullish sector map.

The US equity market was #2 this week, with Latin America in the lead.

DGS10 (inverse of TY – the 10-year yield), rose +8 bp to 2.12%, printing a swing low pattern (71% bullish), and forecaster jumped, but remains in a slight downtrend. Is the 10-year putting in a reversal off 2.00% – or is this just a reaction move? DGS10 remains in a downtrend in both weekly and monthly timeframes. The candle prints hint at a reversal, but so far, the forecasters tell us the trend remains intact. 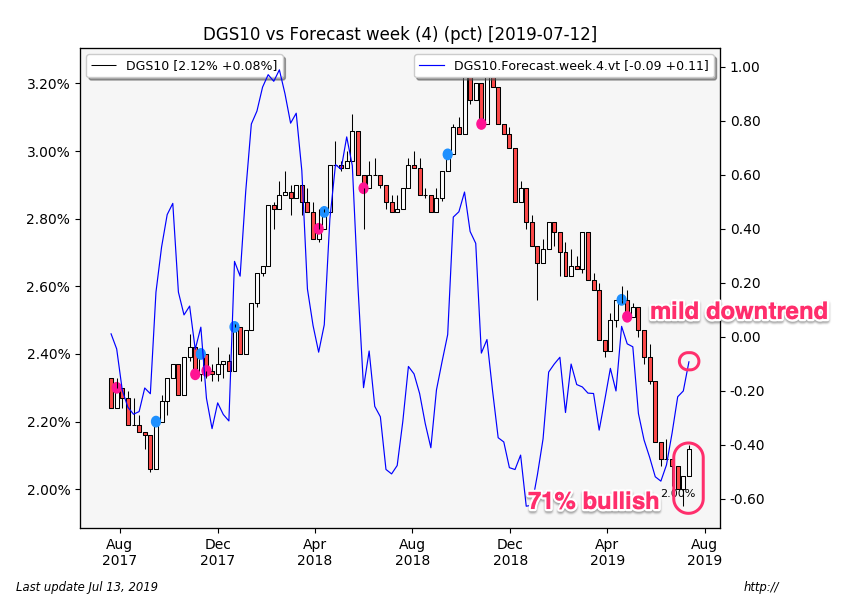 JNK fell -0.12%. Why is JNK falling when the equity market is making new highs? That’s curious, and continues the trend from last week. It isn’t a strong move down, but JNK does remain in a downtrend. BAA.AA differential fell -3 bp, dropping down to 1.01%, and forecaster fell also, but it remains in a modest uptrend. No signs of credit distress at the moment.

Crude jumped +2.65 [+4.59%] to 60.44. The move seemed jump-started by a strong API report on Tuesday, and reinforced by a strong EIA report (crude: -9.5m, gasoline: -1.5m, distillates: +3.7m) on Wednesday. The long white candle slightly more bullish than bearish (so let’s call it neutral), and forecaster inched higher, and remains in a strong uptrend. Crude is now in an uptrend in all 3 timeframes. 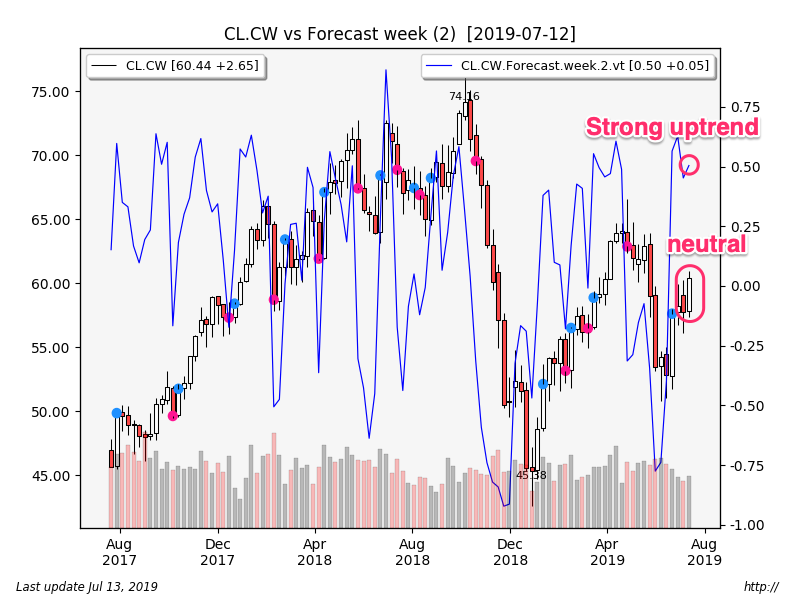 * Premium for physical (via Bullion Vault: https://www.bullionvault.com/gold_market.do#!/orderboard) vs spot gold (loco New York, via Kitco: https://www.kitco.com/charts/livegoldnewyork.html) shows a $1 premium for gold, and a 3c premium for silver.

This week was mostly about Powell’s testimony to Congress; the relatively dovish testimony caused gold to rally, and the buck to plunge immediately after the statement was released Wednesday morning at 8:30 am. Trade-talk restarts, a fantastic +224k payrolls number – they didn’t matter. The “cross-currents” have returned, according to Powell, mostly international but also trade uncertainty.

While all this is certainly true, the Fed has told us for quite some time they are “data driven”, and that +224k payrolls number sure looks like data, as does the +0.03% m/m increase in government-inflation. I don’t think such data will matter; organizationally, the Fed doesn’t want to get too badly at cross-purposes with Trump. Trump has a great deal of political power right now, and he has already put the Fed on notice: if you don’t cut rates now, I will blame you incessantly for the next recession all during the upcoming Presidential campaign. That puts a gun to the head of the Fed as an organization. If Trump wins in 2020, and he takes back the house – what might he do? Probably best to just throw him a rate-cut bone.

While the daily forecasters for the metals bounce around, the monthlies remain pointing higher. The Fed hasn’t cut rates at all, and gold seems to be comfortably above 1400 as of right now. The buck looks to be weakening; it too is moving lower in anticipation of a Fed rate cut in the near future.

Big bar gold premiums on both gold and silver fell, while ETF discounts mostly decreased. PSLV’s premium is almost gone; this is quite a change from where it was just six weeks ago. I recall buying mine at a discount to NAV of perhaps 4%. The PSLV daily chart looks substantially more bullish than the silver chart itself. Isn’t that interesting?

The COT report shows gold at a COT high, with silver looking more inconclusive. Will the commercials be wrong this time about gold? They aren’t wrong often. But being short gold while the Fed starts to cut rates, and the buck drops really seems like a bad idea to me.

So far, no recession. The “goods” sector continues to look weak (and PPIACO supports this), but services (“education & sickcare cartels”) remains strong. Ok, I’m being reductive, but man, that’s really where the growth is right now. Sickcare and education – not teachers, mind you, but administrators. So we’re having an “administrators-led growth cycle” right now. An increase in highly paid paper-pushers is practically guaranteed to lead to better healthcare outcomes and better education for all of us. Right?

So at this point I’m less concerned about recession data, at least for where gold moves next anyway. The Fed is dropping rates at least 25 bp in July, simply because they have to, and this will support gold. Otherwise, Trump will drop a political rock on their heads each and every day during the upcoming presidential campaign. Tinfoil hat time: is it possible the Fed wants a recession to get rid of Trump? I think it is definitely possible. It is much better for them, organizationally, to have a machine politician in place who can be easily bribed by their bankster friends (HRC: $400,000 speeches at Goldman) than to have some crazy rich populist who is able to laugh off a $400k “donation” from the banksters.

Legendary geopolitical and financial analyst Martin Armstrong says America’s economy is like being “the prettiest ugly sister in the family” of nations. So, if the U.S. economy is so good, why the rush to cut interest rates? Armstrong explains, “It’s really the world economy which is in serious trouble. You really have to look closely and pay attention to the words (Fed Head) Powell said. The economy is strong, unemployment is fine. Why would you cut interest rates when the stock market is making record highs? Powell said basically because it was things happening outside the country. The Fed, as I have said before, has become the central bank for the world. . . . This is the problem, and Europe is a complete basket case. They don’t get it, and they keep trying to hold onto their power and punish anyone who disagrees with them. . . . Why is the U.S. economy so good? Why is the Dow at a record high? China is in trouble. Europe is in trouble. Japan is a basket case. The capital is coming here.”

Back in February, Armstrong pointed out in an interview on USAWatchdog.com, “Gold has been rallying right along with the U.S. stock market. This is what I’ve said all along. Eventually, towards the end, they have to align. Why? Because at that stage of the game, it’s us against government. So, tangible assets rise.”

Armstrong says gold catching a bid well above $1,400 per ounce is the beginning of people losing faith in governments around the world. Armstrong says, “What makes gold go up? That’s when the confidence in government declines, and we are no talking about just the gold bugs. We are talking about the average person on the street. They have to reach that point where they question what is going on in government. We are getting close to that. Gallup put out, and I put it on our blog, that 35% of Americans now say that government is the number one problem. When we reach about 45%, things are going to get a lot hairier. . . . When gold is not on a gold standard, and it’s a commodity like everything else, then basically gold goes up against the currency and so does the stock market. So, you have the stock market at highs, and you have gold that caught a bid.”

On the U.S., dollar Armstrong says, “The U.S. wants a lower dollar, and the dollar is being pushed higher. People don’t get this. They say, ‘oh, the dollar has got to crash.’ If the dollar crashes, Trump is having a great day on trade and etcetera. You take the dollar up, and that is what puts pressure on world trade. . . . If the dollar goes down, they are licking their lips and say this is fantastic because they will sell more stuff. When the dollar goes up, that is when you start getting trade friction . . . . The dollar going up is the only thing that is going to break the system. A lower dollar is not going to break it. It is only going to prolong it.”

On Jeffery Epstein and his criminal sexual spider web of underage girls and the global elites, Armstrong says, “It’s an issue of confidence. Could it contribute to the confidence and the faith in government? Yes. It depends on what these prosecutors want to do. Are they going to try to implicate President Clinton with it, or are they just going to try to hush it up as they usually do? You have the Deep State, and it’s really, really deep, and people don’t realize how bad this stuff is. . . . If you start taking down more and more political leaders, then you are going to start to undermine the confidence in the establishment. That’s what our computers have been showing.”
Armstrong says, “Look for inflation to pick up starting in 2020.”