The metals sector map has miners outperforming metal, and silver leading gold. The only thing missing from a true bull market move is: senior miners are leading the juniors. Still, most components are back above all 3 moving averages. Copper is the sole holdout, dropping slightly on the week and remaining below all 3 moving averages. One other note: you can see that gold/Euros is lagging behind gold/USD – this tells us that perhaps a third of gold’s move this week was just a currency effect.

Gold jumped +36.02 [+2.75%] to 1346.77. On Friday, gold managed to break out above round number 1350 to a new high of 1354, just slightly higher than February’s high of 1352, but was unable to close above it at end of day. The opening white marubozu was a bullish continuation, and forecaster jumped higher, moving into a very strong uptrend. Gold is in an uptrend in all 3 timeframes.

COMEX GC open interest rose +39,090 contracts this week. That was 18 days of global production in new paper – an increase of about 8.4%. Someone sure is loading up short.

The commercial net plunged by -63k – almost all fewer longs (-59k) with a few new shorts (+4k). That’s really unusual; mostly commercial net positions change in the short interest category. Managed money net rose by +70k, much of which was 40k new longs, along with -30k fewer shorts. For whatever reason, the commercials aren’t going short against this rally. Managed money doesn’t have many shorts left to cover – just 63k remaining. Any rally will be all about managed money jumping in long. We are far from a top, however; currently managed money has only 160k longs, and the 2016 peak was around 300k – that says we could see another 6 weeks of rally at this week’s rate. The takeway: managed money is underweighted long, and commercials aren’t going short. 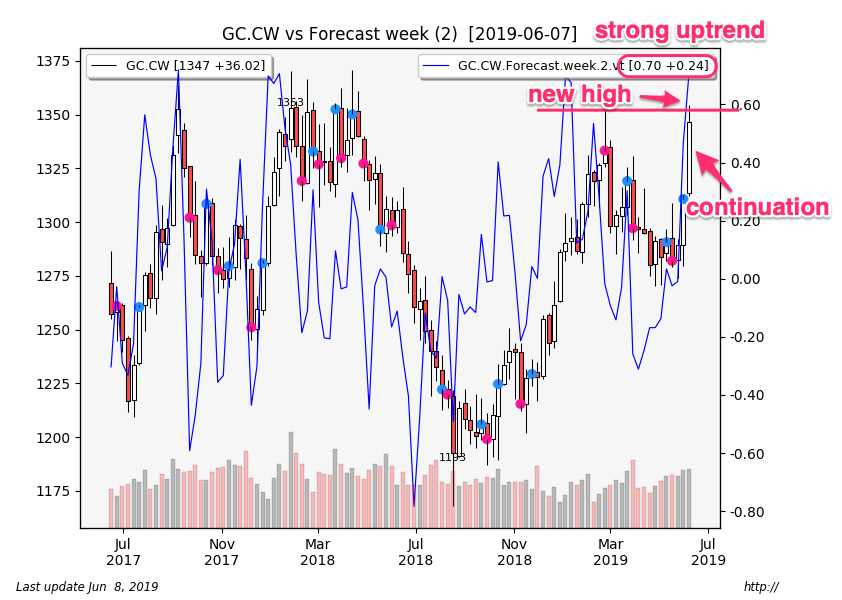 Silver climbed +0.45 [+3.09%] to 15.01. The swing low candle print was ridiculously strong (79% bullish, unbelievable really), and forecaster jumped higher into a strong uptrend. The volume was also extremely heavy, which is a positive sign. Lastly, the currently-in-progress monthly print of a swing low is also very strong (71% bullish). Silver ended the week in an uptrend in all 3 timeframes. 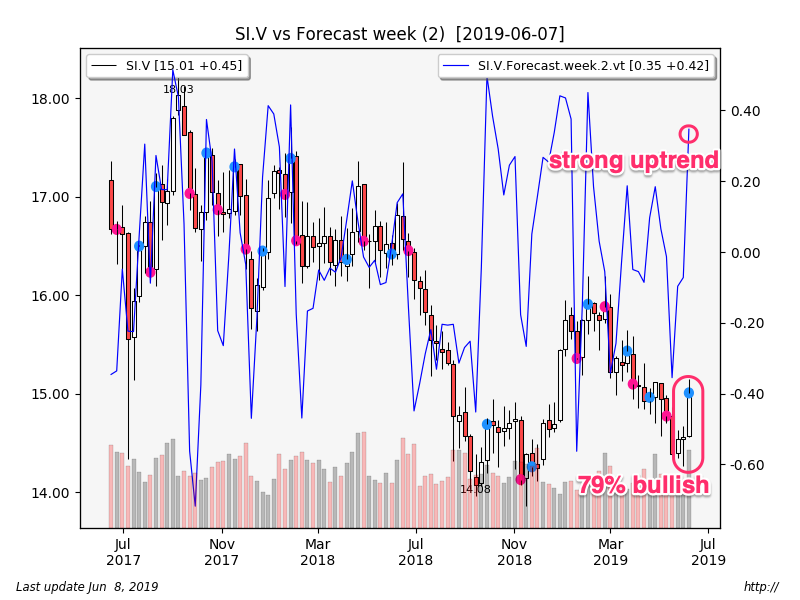 Miners had a very strong week; XAU rose +6.16%, the opening white marubozu was a bullish continuation, and forecaster jumped higher into a very strong uptrend. XAU’s monthly swing low (currently forming) also looks extremely strong (82% bullish) so far. XAU ended the week in an uptrend in all 3 timeframes. That said – daily forecaster has fallen substantially, and may be hinting at a near-term reversal for the miners. 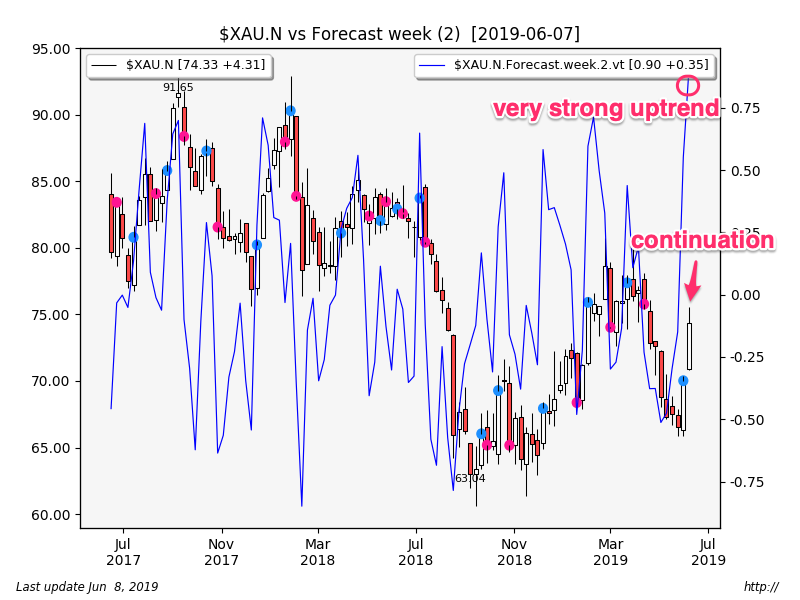 The buck plunged -1.21 [-1.24%] to 96.00. The opening black marubozu was a bearish continuation, and forecaster moved lower into a reasonably strong downtrend. The current monthly swing high is also quite bearish (67%). The buck is now in a downtrend in all 3 timeframes. I have to say, the forecaster has been calling this downside reversal for several weeks now, but I didn’t believe it. It sure looks like a thing now. 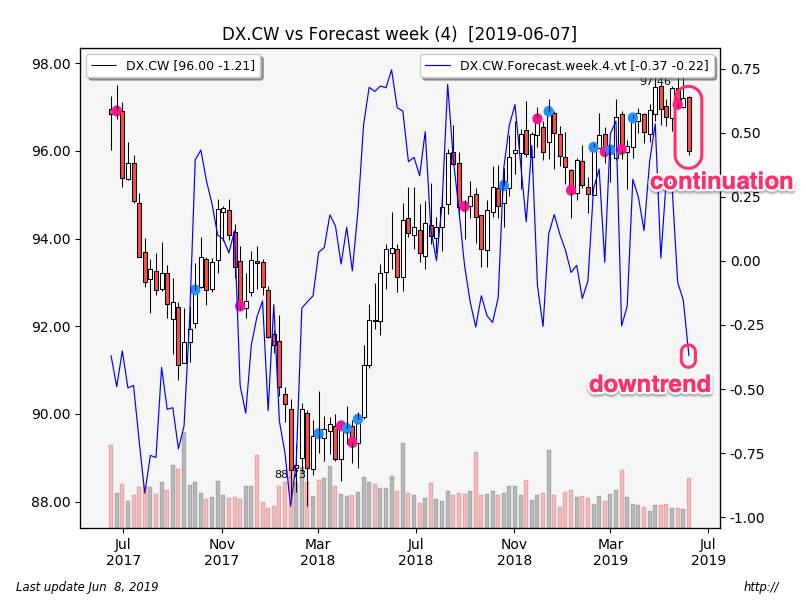 SPX jumped +4.41% this week, starting with a strong swing low on the daily, and finishing with a close just above the 50 MA. The weekly strong line/bullish engulfing candle was very bullish (63%) and forecaster moved higher, but it was not enough to pull SPX back into an uptrend. SPX ended the week in a downtrend in the weekly and monthly timeframes. 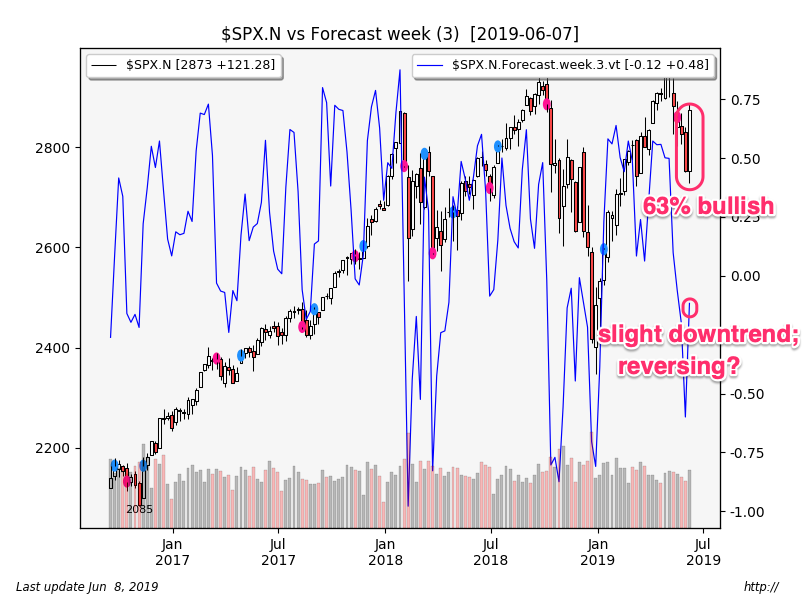 Sector map has materials and homebuilders leading, while utilities and REITs did worst. Still, every single sector moved substantially higher. This was a relatively bullish sector map.

The US equity market was the best performing market this week.

TY rose +0.32%, the opening white marubozu candle was a bullish continuation, and forecaster was unchanged, remaining in a strong uptrend. However, the TY daily did reverse on Thursday – TY seemed to run into some selling pressure this week, possibly as a result of the strong rally in equities, as well as the plunge in the buck. Even so, TY remains in an uptrend in both the weekly and monthly timeframes. The 10-year yield fell -5.8 bp to 2.2.08%. This is roughly the same yield as the multi-year low in September, 2017.  The chart below shows how close the 10-year yield is to the previous low from 2017. 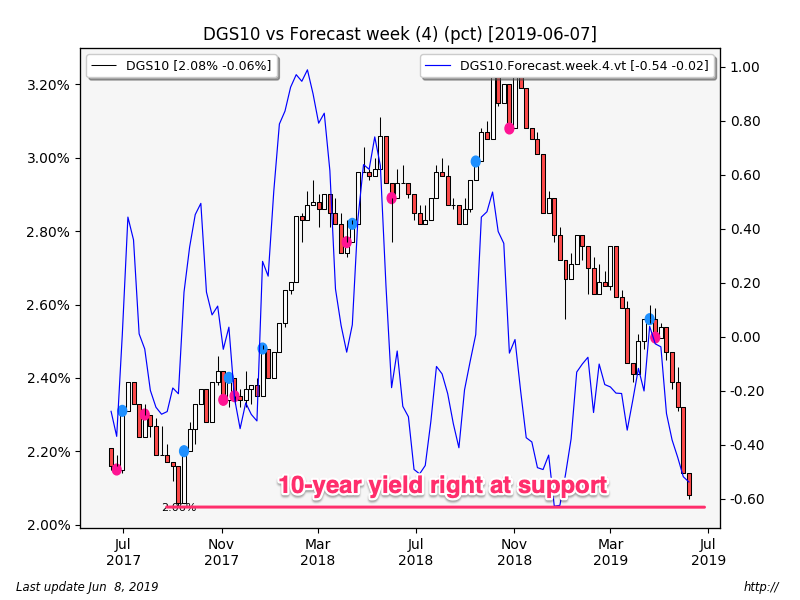 If bond yields break below 2%, there is a whole lot of air between there and the Jul 2016 lows of 1.37%. Alternatively, this is a pretty good place to take profits if you have been long the 10-year over the past 9 months. It will be interesting to see how things play out.

JNK climbed +1.36%, a strong move higher; JNK ended the week in a reasonably strong uptrend. This aligns with the move higher in equities. The BAA.AAA differential also moved higher, up +3 bp to 1.03%. It is now in a moderately strong uptrend. The rising differential signals an increasing level of concern in the credit markets; money is flowing from junkier debt into the safer stuff, although the overall level of concern remains moderate. 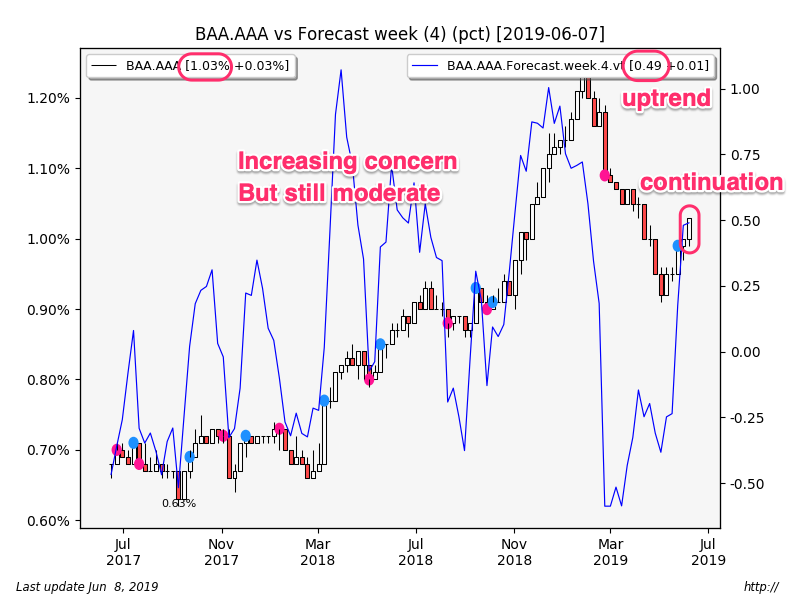 The differential is at 1.03%. Here is the scale of concern:

Crude rose +0.75 [+1.40%] to 54.24. While the EIA report was fairly ugly (crude: +6.8m, gasoline: +3.2m, distillates: +4.6m) and that report drove crude to a new low just north of $50, it managed to bounce back on Thursday and Friday. The takuri line candle print was quite bullish (56%), but weekly forecaster remained in a strong downtrend. However both daily and monthly forecasters did bounce back – enough to end the week in an uptrend in both daily and monthly timeframes. The daily is looking especially strong. Is this a reversal for crude? It might be – though I’d be happier if weekly forecaster had bounced higher. 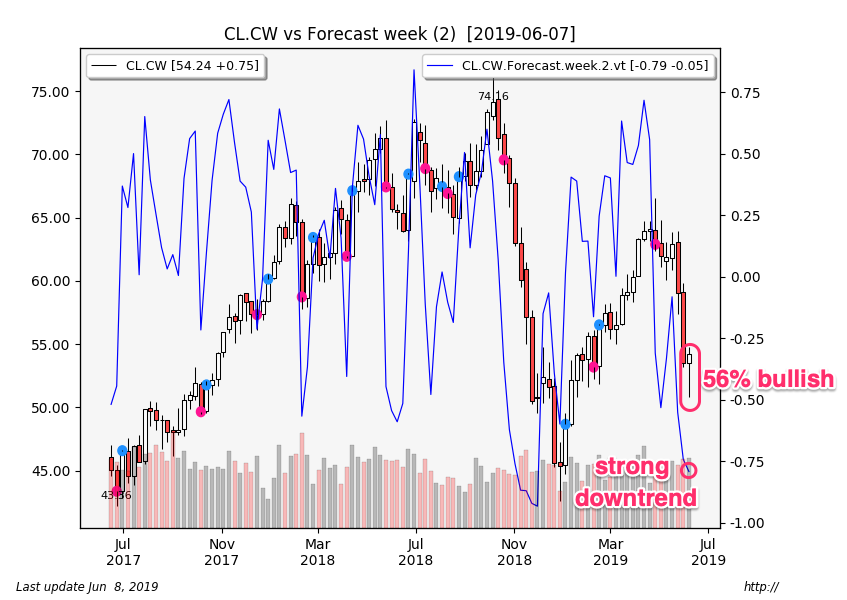 The housing downturn continues, manufacturing continues to be weak, but the recession segment of payrolls surprised to the upside – and appears to have backed out last month’s recession call, at least for the series I track. Services continues to do well, at least according to the ISM surveys.

The equity market rebounded strongly this week, as did crude. The metals also shot higher, led by the miners, then silver, and then gold. Bonds were slightly higher, while the dollar fell off a minor cliff. Apart from equities, this week seemed to be mostly about rate cut prospects; currently, 3 rate cuts by December 2019 is an even-money shot, with 2 cuts almost a done deal. Dollar holders don’t like it when they see a rate cut in the offing. As a result, money fled for other places. Even the Euro saw some inflows, with Draghi telling us that while he was keeping rates steady, he wasn’t actually thinking about lowering them any further. Gold seems to really like the prospect of rate cuts. Either that, or maybe the PM downturn had just run out of steam. Its hard to know for sure.

Big bar gold premiums on gold remain low, silver’s premium remains a bit higher than normal, while ETF discounts shrank substantially. There is no shortage of gold or silver at these prices.

The COT report for gold was a bit surprising this week; commercials didn’t go short into the recent rally – rather they sold their long positions, and in a big way too. I haven’t seen this happen before.  I wonder: do the commercials know something?  Or is this just a fluke? If they continue to avoid going short, price could really move violently higher.   In silver, things followed the normal pattern; commercials went short, while managed money covered. Given current holdings, there is the potential for a multi-month rally ahead of us in both metals.

Shorter-term, we may see a correction; momentum appears to be slowing on the daily chart for both metals as well as the miners, although the indicators have yet to actually reverse.

Longer term…where things go next is a much harder question to answer. The weekly and monthly charts all point higher for the metals, but the recent updates to the macroeconomic indicators are really not suggesting recession right now. Specifically, “services” (80% of US private GDP) as well as the specific employment series I follow are both suggesting that no recession is imminent. This more than a little bit surprising to me, as just last week things looked considerably darker.

I am starting to agree with Wolf Richter, who suggested 4 days ago that the current bond market rally might just be overdone. https://wolfstreet.com/2019/06/04/treasury-market-acts-like-the-economy-is-in-a-death-spiral-but-wait/

So while gold and the miners are now moving strongly higher, and the buck plunging, all because everyone is projecting 3 rate cuts by December – here I am worried that we might not have a recession just yet after all. Here is that time series from payrolls that turned me around on Friday: 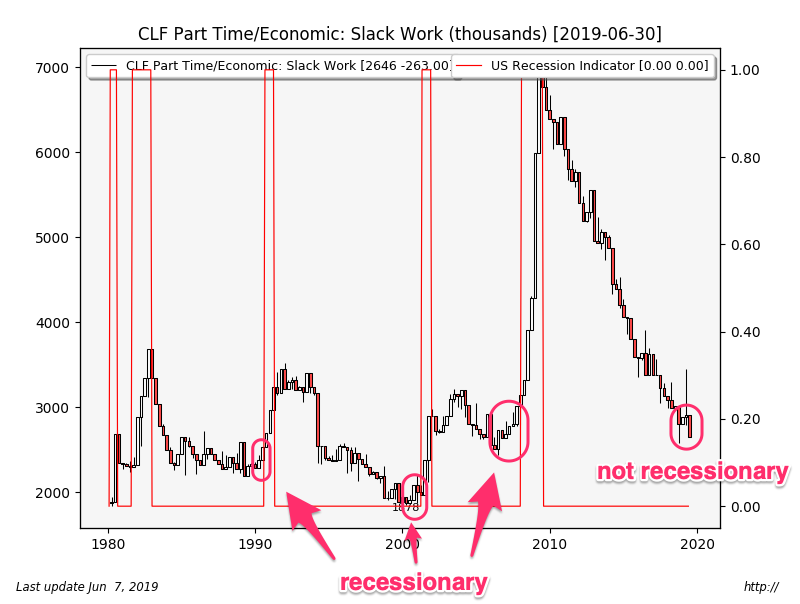 So my sense is, enjoy the current PM rally for now. But – maybe – don’t be loading up on 10-year bonds at this point. This may be a near-term top for bonds.