Of course for us, the big story is gold breaking – and managing to close the week – above round number 1400. In spite of 104 “tons” of paper gold dumped into the COMEX on Thursday, plus another 41 “tons” just on Friday, eager buyers pushed price into nosebleed RSI-7 levels (92) on incredibly high volume.

The metals sector map shows miners outpacing metal, juniors leading seniors, but silver trailing gold. Silver remains the poor stepchild. Industrial metals copper, palladium and platinum brought up the rear, with platinum looking the most sickly. All of the primary PM components are above all 3 moving averages, and most have executed golden crosses. This is a mostly-bullish sector map. If we could only convince silver to lead gold, things would be perfect. The fact that silver is lagging tells us that this move is a safe haven move.

Gold rose +58.98 [+4.37%] to 1407.29. Almost all the move came following the FOMC announcement on Wednesday. The weekly long white candle was a bullish continuation, and forecaster moved higher into a very strong uptrend. Gold remains in an uptrend in all 3 timeframes. Friday’s daily spinning top candle was also a bullish continuation. So far, no technical signs of a top, although with RSI-7 values of 92, gold is quite overbought.

COMEX GC open interest rose +62,452 contracts this week, and 13,154 contracts just on Friday. It was 28 days of global production in new paper. These were commercials going short, and there was probably some official intervention as well. It didn’t seem to matter much.

Note: COT report did not include the 3 largest rally days this week. We have to wait until next week before the weasel banksters tell us what they did. The commercial net fell by -22k contracts; that was 26k new shorts, but also 4k new longs. Managed money net rose by +21k contracts, which was 22k new longs, and 770 new shorts. From the standpoint of the commercial shorts, we are getting closer to a COT top for gold. 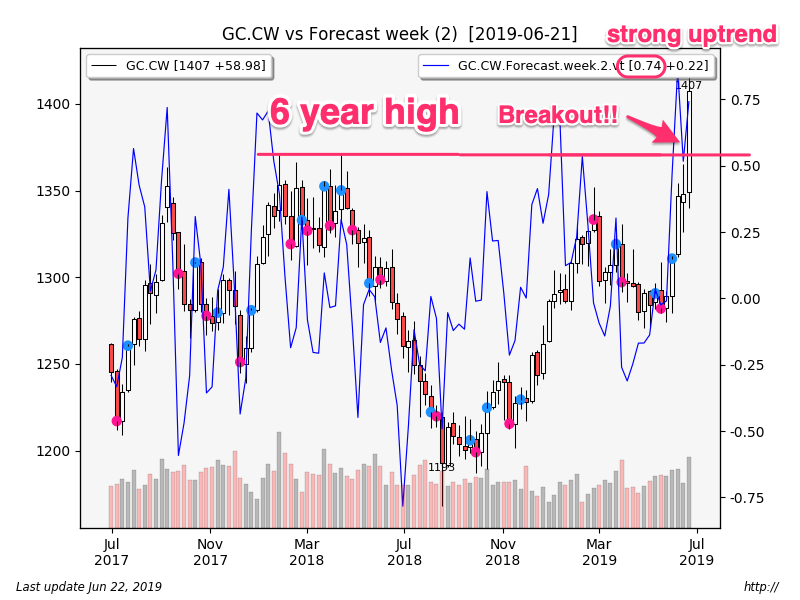 Silver rallied +0.49 [+3.30%] to 15.34 this week. Silver’s move took place Tuesday-Thursday, while on Friday silver retraced a bit. The long white candle was a bullish continuation, and forecaster jumped higher, into a very strong uptrend. Silver ended the week in an uptrend in all 3 timeframes. Friday’s spinning top was also a bullish continuation – no reversal on the daily chart for silver.

COMEX SI open interest fell -3,378 contracts this week, and plunged -7,122 contracts just on Friday (15 days of global production in paper, taken off the board in just one day). That was a huge amount of short-covering on Friday. Who might have covered? I don’t know. Silver looked weak on Friday. That suggests it was the commercials that were bailing out of their short positions on the intraday drop, which was about 32 cents peak-to-trough. Did the commercials use the brief drop to cash out? Very curious. We’ll have to wait a week to find out.

In silver, the commercial net fell -9.3k contracts, which was 13.6k new shorts, but also 4.3k new longs. That was a large number of new shorts. Managed money net rose +4.3k contracts, which was 7.4k new longs and 5k fewer shorts. Managed money is covering short, but not very rapidly – they still have a large short position. Silver is far from a COT top. 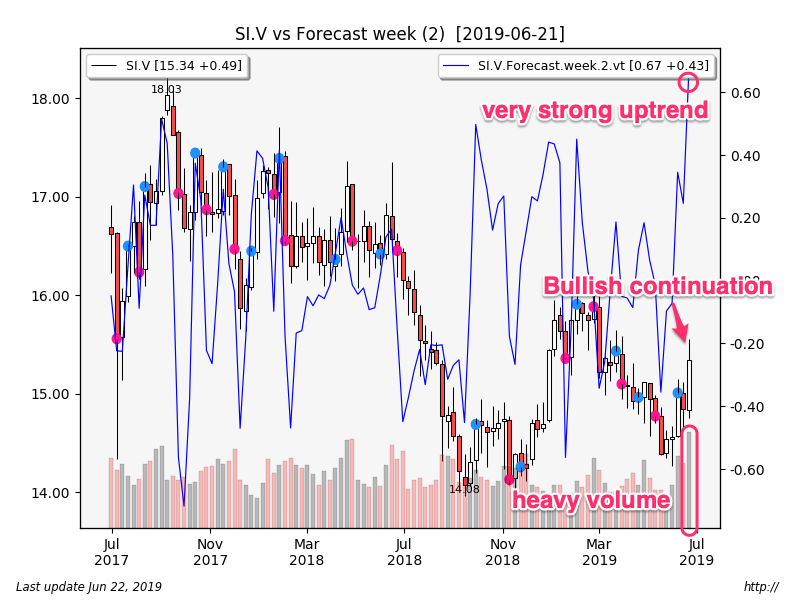 Miners screamed higher this week; XAU jumped +8.35%, a huge move, breaking out to a new multi-year high. The closing white marubozu was a bullish continuation, and forecaster remains in a very strong uptrend. XAU ended the week in an uptrend in all 3 timeframes. All uptrends are strong, and the monthly swing low candle pattern is exceptionally strong too (82% bullish). 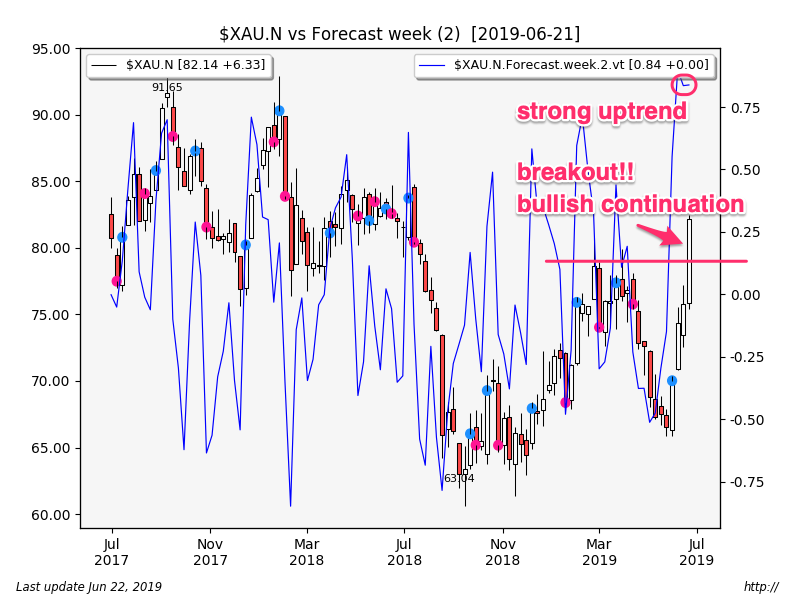 The buck plunged -1.38 [-1.42%] to 95.68. Losses for the buck happened Wednesday-Friday, following the FOMC meeting. I have not seen the buck plunge like this for quite some time. The closing black marubozu was a bearish continuation, and forecaster crept lower into a reasonably strong downtrend. The buck made a multi-month low just on Friday. Daily forecaster looks extremely bearish. The buck is in a downtrend in all 3 timeframes, and on Friday, it blew through its 200 MA too.

Was the big plunge in the buck responsible for the PM rally? It definitely helped, but gold/Euros also rallied this week too. The buck was not the cause of the PM rally, but it probably added some fuel to the fire. 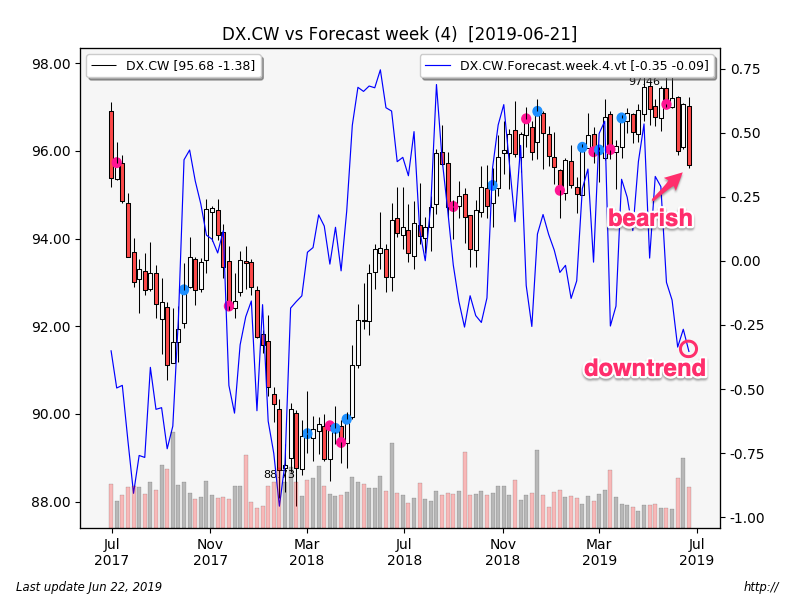 SPX jumped +63.48 [+2.20%] to 2950.46. That’s a new weekly all time closing high for SPX. The opening white marubozu was a bullish continuation, and forecaster moved higher, putting SPX in a strong uptrend. SPX is in an uptrend in all 3 timeframes.

Sector map has energy and defense at the top, with homebuilders and consumer staples doing worst. This was a neutral sector map..

The US equity market was #3 out of 6 markets this week, with emerging asia on top.

Close cousin DGS10 (the 10-year yield) moved down -2.5 bp to 2.07%, making a low for the week of on Thursday to 1.97%. The 10-year yield reversed strongly on Friday, bouncing back +6.7 bp. This resulted in a bullish-looking spinning top (39%), and forecaster moved higher, but remains in a strong downtrend. DGS10 weekly forecaster is a bit slow in responding – this could actually be a reversal for the 10-year yield, but we will have to wait for next week to be sure. 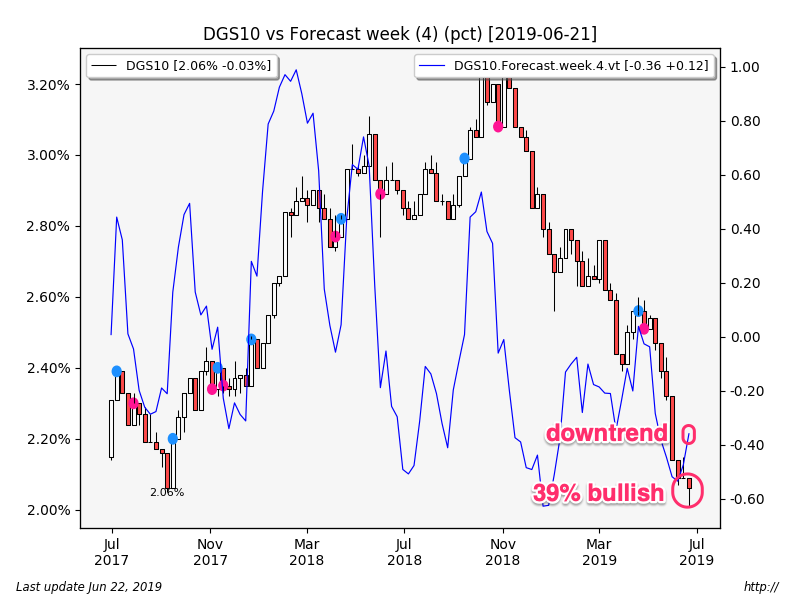 JNK rose +1.30%, jumping to a new multi-year high dating back to early 2018. This is a clear sign of risk on from junky debt. However, BAA.AA differential is up 4 bp on the week, moving slowly higher even after the junky debt rally. This tells us that money is preferring the safer issues to the higher risk ones, which is a sign of increasing (but still quite moderate) concern over credit quality. BAA.AAA differential is in a moderate uptrend, which tells us that credit concerns are projected to increase. 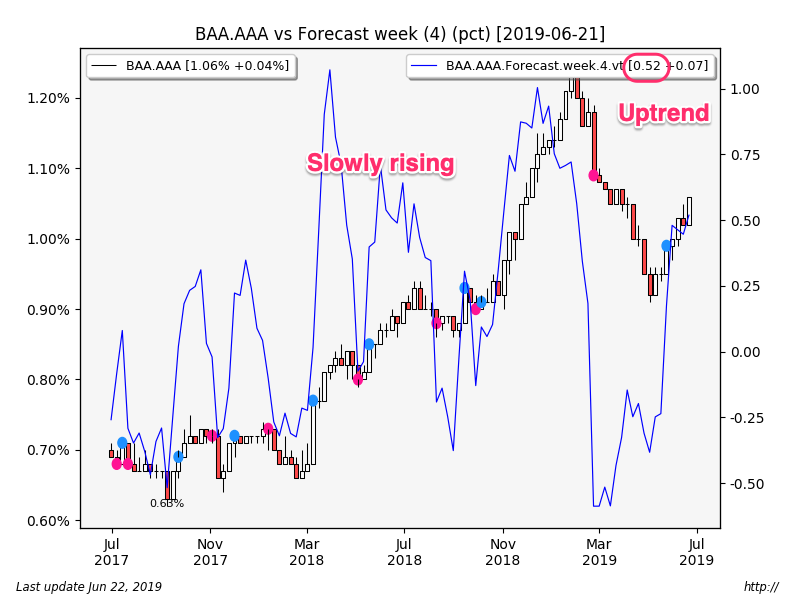 Crude jumped +4.76 [+9.00%] to 57.64. The big gains came on Tuesday and Thursday. Friday’s short white candle was a bullish continuation. The weekly long white candle was also a bullish continuation, and a weekly swing low. Forecaster screamed higher, and is now in a strong uptrend. Crude is in an uptrend in both daily and weekly timeframes, and the monthly bullish harami looks reasonably strong (58% bullish), although the monthly forecaster has yet to flip to an uptrend. EIA report was modestly bullish (crude: -3.1m, gasoline: -1.7m, distillates: -0.6m), but the EIA report itself didn’t seem to lead to any substantial price movement. Instead, crude seemed to be propelled higher by talk of a nice phone call between Trump and Xi, as well as concerns over the US-Iran situation. 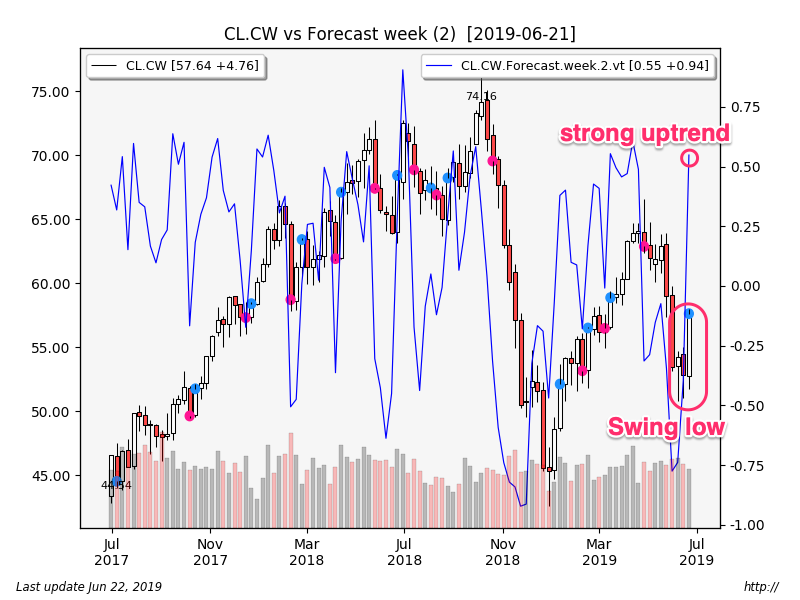 * Premium for physical (via Bullion Vault: https://www.bullionvault.com/gold_market.do#!/orderboard) vs spot gold (loco New York, via Kitco: https://www.kitco.com/charts/livegoldnewyork.html) shows no discount for gold, and a 3c discount for silver.

Is there evidence of actual favoritism in Google’s search engine? Well, the European Union certainly thinks so, having fined Google $2.7 billion last year for having biased search results. In the months leading up to the 2016 election here in the U.S., I led a team that used objective methods to preserve 13,207 online election-related searches and the 98,044 web pages to which the search results linked. These data showed that Google’s search results favored Hillary Clinton (whom I supported) in all 10 positions on the first page of search results — enough, perhaps, to have shifted two or three million votes in her direction over time.

The PMI flash looks recessionary. It also appears as though plunging mortgage rates have stimulated mortgage applications – presumably a precursor to an increased number of home sales.

This week we had the Fed turning at least somewhat dovish (2 rate cuts projected for 2019), a very near miss of a pointless, expensive, and destructive war with Iran, and a “very nice” phone call from Trump to Xi and the subsequent restart of the US-China trade negotiations. This group of major events resulted in gold breaking out to a new 6-year high, silver was scraped off the pavement into a modest uptrend, and the miners screamed higher as traders rushed to get positions. Equities also broke out to a new all time high as well.

I believe the particulars of gold’s breakout are important to review. The spike higher on Thursday came about as a direct result of the Iranian shoot-down of a US drone, but the day ended with a close well above the previous high of 1382, and it came in spite of 102 “tons” of paper GC contracts dropped onto the COMEX, presumably some of which was official intervention. Momentary spikes through resistance are one thing, a daily close above resistance is quite another. Gold spiked to 1415 on Friday, and then closed relatively near that high at end of week. Prospects of war, plus a dovish FOMC and a plunging dollar was an unbeatable perfect storm for gold. This resulted in a 6-year high, and the all-important close above round number 1400.

Does the gold rally ultimately point at declining confidence in government? Cumulatively, I believe it does. A pointless war with Iran isn’t great for confidence, or for the US treasury, or for the buck. But it is great for gold. The US has a structural deficit which will only get larger if Trump and the Democrats end up working together on “infrastructure” (i.e. deficit-funded goodies for their friends in the construction industry), alongside a possibly slowing economy. Falling rates means that gold (which pays no interest) becomes progressively more attractive, and the buck becomes less attractive, which helps gold some more0. If the Fed goes the route of the ECB and goes “negative”, gold becomes even more attractive vs the buck and Treasury notes.

Big bar gold premiums on gold fell slightly, silver’s premium also dropped, while ETF discounts mostly increased. There is no shortage of gold or silver at these prices.

It is possible that the fuss with Iran will die down, some enlightened being in the DoD will put a stop to these “please shoot me down and kill Americans and start a war” P-8 missions in the Gulf, and the drumbeat towards war will die down a bit. Gold would fall if that happened. But the upside damage to the gold chart has already been done.  I suspect new highs for gold are just a matter of time.

A note: my code is reasonably good at assessing what the trend is, and what it might be.  It isn’t as good at picking the tops.  We could well be at one.  This is a news-driven market.  Again, if peace broke out, Friday could mark the top in gold for a time.  That’s just one caveat after a great week.

And one more thing. Bitcoin broke out to new post-crash highs this week: it closed at 9917, and the uptrend for bitcoin is quite strong. No doubt the fact I noticed it probably means it is near a top. This week, bitcoin has the strongest uptrend of all the asset classes I follow.