The metals sector map is showing a nascent recovery in gold and silver. Silver led gold, which is a positive sign. However, the miners are not doing well, underperforming both gold and silver.  In addition, the larger miners are outperforming the juniors, which is bearish too. Industrial metals copper & platinum both look very weak – they did worst overall this week, and they remain below all 3 moving averages. The way I interpret the sector map, it is possibly just a bullish headfake by silver, given just how poorly the miners are doing relative to the other PM components.  Note that gold/Euros remains above all 3 moving averages – which tells us that gold’s downtrend is just a currency effect.

Gold rose +7.34 [+0.57%] to 1289.34. The big move for gold happened on Thursday, a reasonably strong reversal both as the candle print as well as the forecaster. However, the weekly print was just a spinning top, which was a bearish continuation, and weekly forecaster moved lower – deeper into a downtrend. No weekly reversal for gold just yet. Gold ended the week in an uptrend in both daily and monthly timeframes.

Gold/Euros looks more positive – it is in an uptrend in all 3 timeframes, and it is above all 3 moving averages as well. On the longer term chart, gold/Euros is just moving sideways after a 4-month rally, rather than correcting.

The commercial net rose by 29k contracts, which was 21k fewer shorts, and 8k new longs. Managed money net fell by -37k contracts, which was 23k fewer longs, and 13k more shorts. No turning point for gold. That said – I looked at the multi-year trend, and it suggests that the commercial net position of -108k is not projecting a move dramatically lower for gold. The COT may not be projecting an imminent bullish reversal, but longer term, gold COT is telling us that gold probably isn’t going much lower. 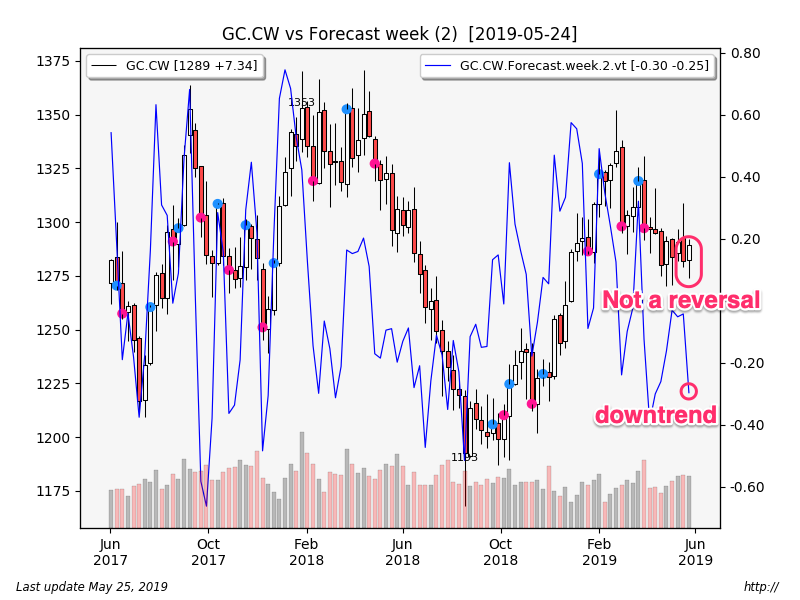 Silver rose +0.15 [+1.08%] to 14.54. As with gold, the big move happened Thursday – a swing low, and a strong move higher in the daily forecaster. The weekly bullish harami was mildly bullish (33% reversal), and weekly forecaster did move higher, but it was not enough to change the trend. Silver remains in a downtrend in the weekly and monthly timeframes. On the daily chart, silver has had this recent pattern of strong, counter-trend rallies followed by selling pressure, followed by even stronger plunges to new lows. Is this week’s rally yet another example of that same pattern?  Maybe.  We will have to see if there is any bullish follow-through next week.  The weekly bullish harami candle pattern doesn’t look all that exciting.

The gold/silver ratio fell -0.53 to 88.43. The drop is somewhat bullish – and the ratio remains in 25-year-high territory.  At some point, that will matter.

The commercial net rose +7.6k contracts, which was 4.1k new longs, and 3.5k fewer shorts. Managed money net fell -15k contracts, which was 10.7k new shorts, and -4.6k fewer longs. This is a huge increase in short interest by managed money; they are piling in short as prices fall. They continue to be right, but historically they usually have the heaviest concentration of shorts right at the bottom. Managed money is historically seldom net short; today they are net short 29k contracts. The commercials are almost net long silver; this too is a historically rare position.  Still, as has been the case for weeks now, a strong-looking COT report, by itself, is not a reversal indicator for silver. 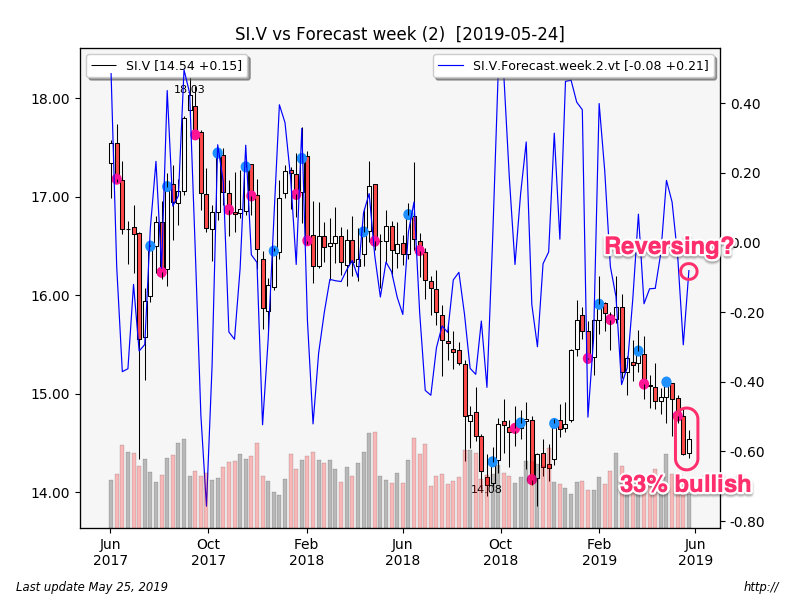 Miners were down on the week, with XAU falling -1.38%. Thursday’s metals rally didn’t bring the miners along with it. The weekly candle print was a short black/NR7 which was a bearish continuation. Forecaster moved higher, but remains in a downtrend. No reversal yet for the miners, who (unaccountably. somehow) still remain in a monthly uptrend. XAU remains in a downtrend in both daily and weekly timeframes. 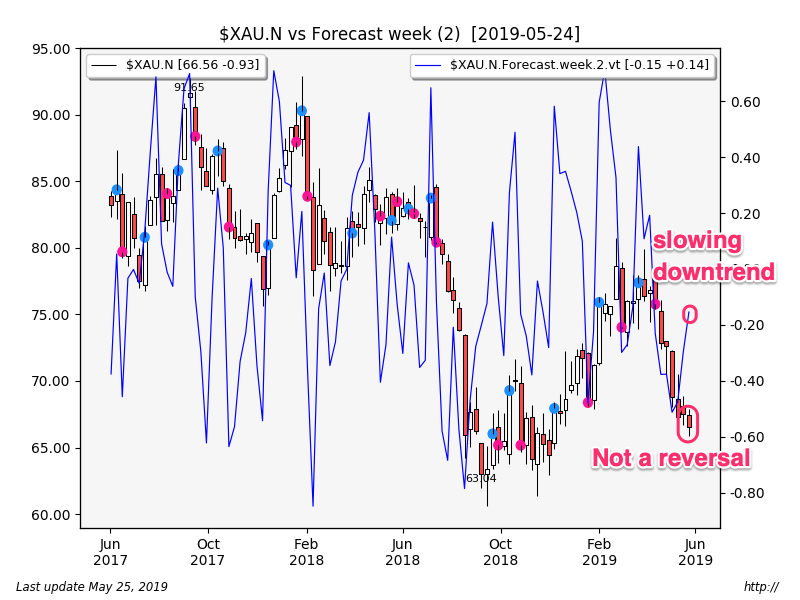 The buck fell -0.38 [-0.39%] to 97.06. Friday’s (daily-chart) swing high looked bearish (50% reversal), and the weekly long black candle was also bearish (40% reversal). Weekly forecaster also plunged, dropping into a downtrend. This week’s drop also pulled the monthly into a downtrend as well. So much for the threatened breakout from last week: the buck is now in a downtrend in all 3 timeframes.

Even so, I’d say the bearish dollar reversal depends entirely – at least in the near term – on what happens with BRExit, and on the new British PM.  I am detecting faint notes of panic from Germany at the prospect of a PM Boris Johnson.  A hard BRExit, and the buck will probably reverse once again and blast off to new highs. 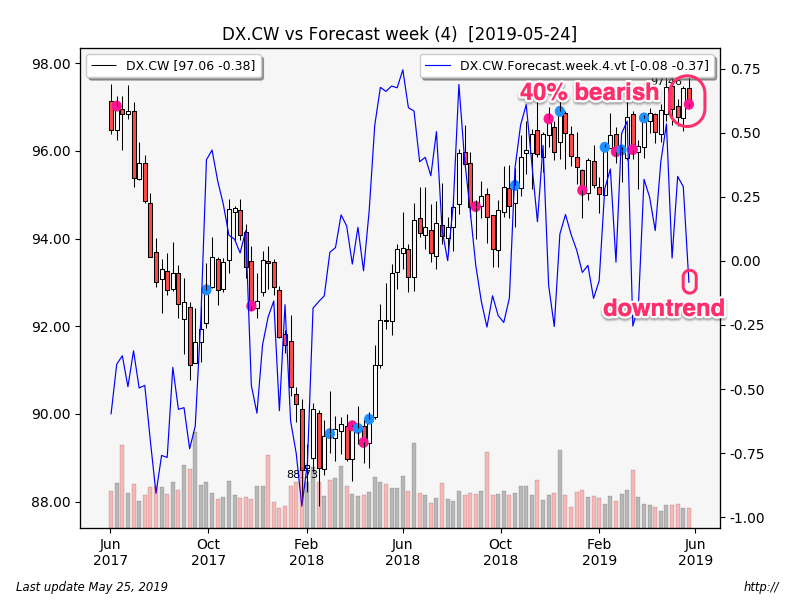 SPX fell -1.17% this week; the moves down took place on Monday and Thursday. Daily forecaster flipped into a downtrend after the Thursday drop. The weekly spinning top was unrated (SPX managed to avoid a new low), and forecaster moved lower, and is now in a modest downtrend. The monthly bearish engulfing now forming looks fairly unpleasant: a 72% reversal. SPX ended the week in a downtrend in both daily and weekly timeframes. 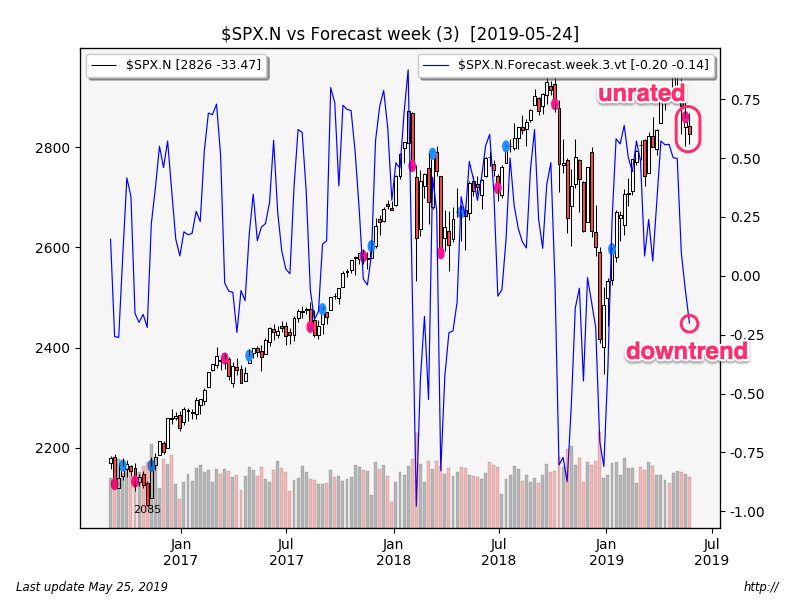 Sector map has energy and tech leading lower, while utilities, sickcare, and REITs did best. That’s a bearish sector map.

The US equity market was second from the bottom this week; Latin America did best. 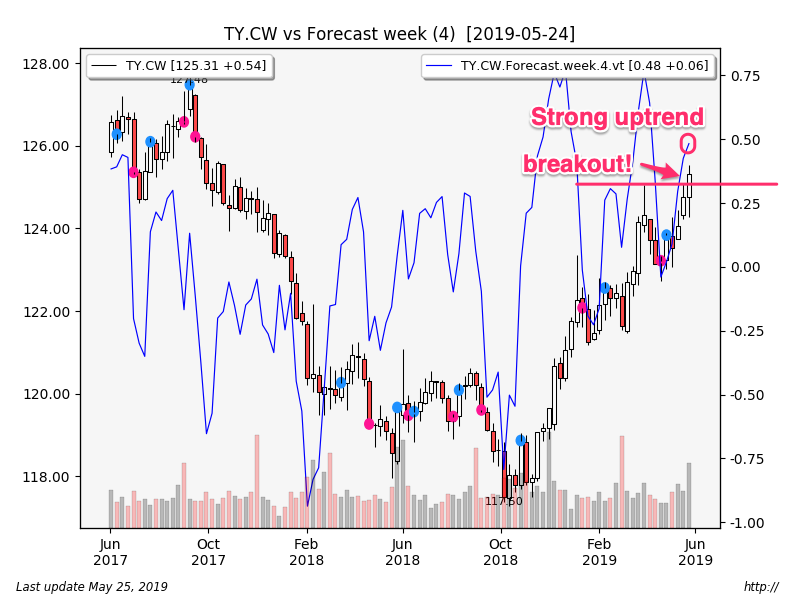 JNK fell -0.32%, with the loss coming primarily on Thursday. JNK is in a downtrend, but not a very severe one. Cousin HYB has just been mostly chopping sideways – it is actually in a shallow uptrend. The BAA.AAA differential was unchanged this week. Is it reversing or just slowing down? Its hard to say. Certainly no four-alarm fire just yet. 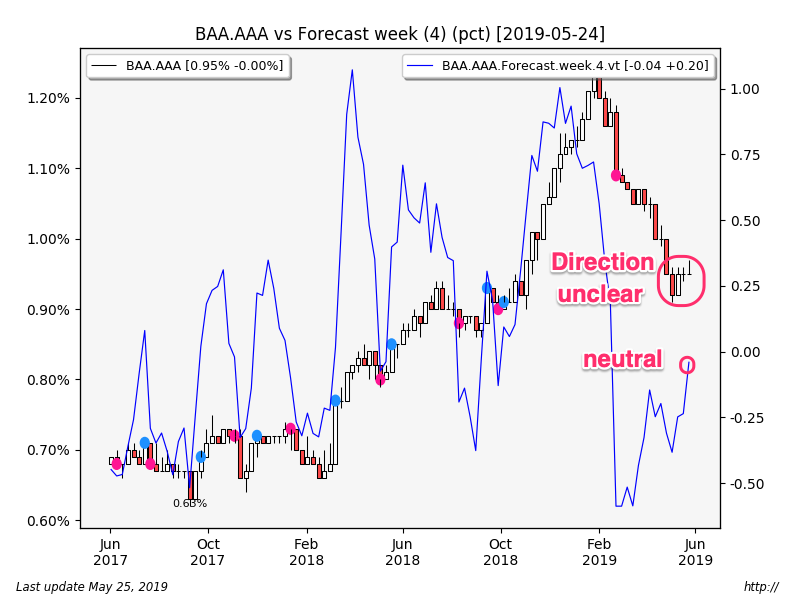 Crude fell hard this week, dropping -3.88 [-6.17%] to 59.05. The damage to crude happened Wednesday and Thursday, apparently driven by a bearish EIA report (crude: +4.7m, gasoline: +3.7m, distillates: +0.8m). The weekly bearish engulfing was definitely bearish (58%), and forecaster plunged hard, and is now in a strong downtrend. Crude remains in a downtrend in both daily and weekly timeframes, with the monthly right on the edge – and that currently-forming monthly bearish engulfing/swing high also looks quite bearish too (75%). Crude has a week to get itself together before that monthly bearish pattern takes hold.  And – as crude goes, probably, so goes SPX. 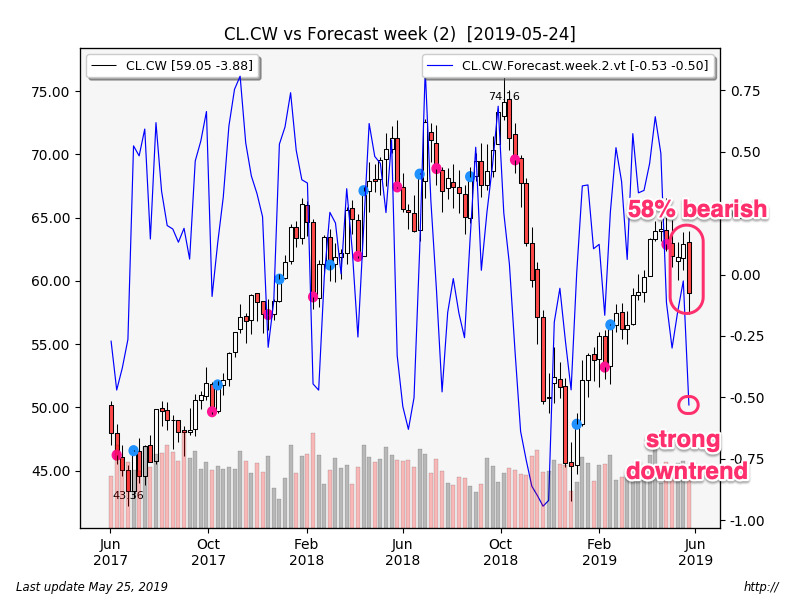 * Premium for physical (via Bullion Vault: https://www.bullionvault.com/gold_market.do#!/orderboard) vs spot gold (loco New York, via Kitco: https://www.kitco.com/charts/livegoldnewyork.html) shows a $1 discount for gold, and a 9c premium for silver.

News this week sums to “housing downturn continues”, “manufacturing recession either here, or coming soon.”  And now the Flash PMI is giving hints at a drop in services too.

The equity market continued selling off – although not very rapidly – following the implosion of the US-China trade negotiations last week. Crude was the big loser, printing some evil-looking candles and plunging below round number 60. Was it all just about a bad EIA report? I think the trade talks had something to do with it also.

The recession continues to approach – and may be here already. Certainly manufacturing is already in a recession. Trump continues to talk about the Best Economy Maybe Ever, but he’s a salesman, that’s what he does. And when more evidence of the downturn arrives – in employment numbers – he will blame the Fed for “not dropping rates when he told them to” – that’s his “insurance policy.”

“Powell – my worst appointment, ever.” Trump will throw him right under the bus.  Powell: Scapegoat of the Year.

The inverting yield curve is more evidence that Big Money is projecting a downturn – fleeing short term debt in favor of the medium-term stuff. Post 1980, the yield curve tended to invert some time prior to a recession hitting.  During that period, inversions have been a leading indicator, rather than a coincident indicator of recession.  The inverted yield curve told you that a recession would be coming a year, maybe two in the future.  However, the other numbers I’m seeing tell me the recession is probably here right now.  My guess: this change in behavior is yet another deformation from the Fed – where 4 trillion in bonds were purchased with newly printed money. 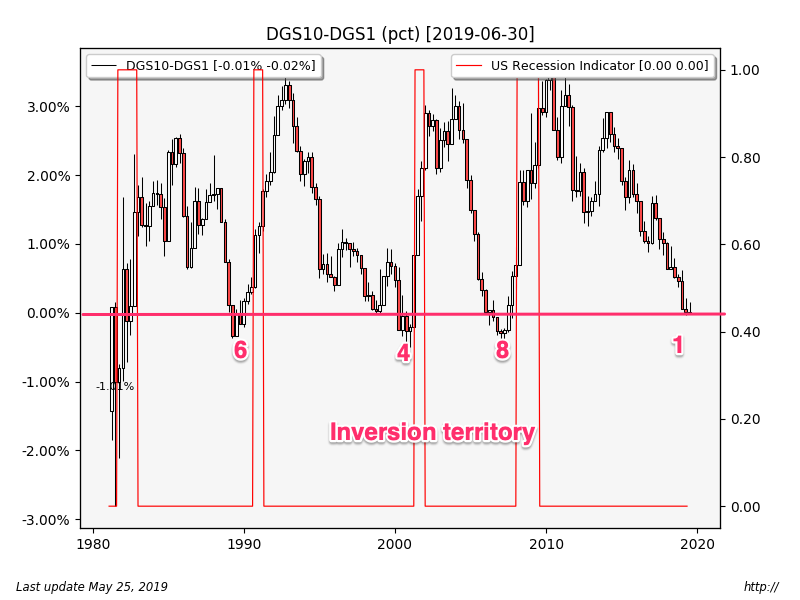 The COT report for silver continues to suggest we are at or near a low for silver, while gold COT report is slightly bullish but no more than that.

Do we have a low yet for PM? According to the weekly chart – not yet. The miners are my tell: they continue to look unusually weak. While the silver COT report looks good for silver, and the daily chart is suggesting a reversal, but the longer-term low may still not be in.  After such a long downtrend, its probably best to wait for the weekly to signal a reversal.

Is it just me, or is this year screaming by with a rocket-powered assist?  It’s the end of May already!

The annual In Gold We Trust report by Ronnie Stoeferle and gang comes out in the upcoming days May 28, actually. Any plans on having him on a podcast to discuss this years report?

You have to laugh to keep from crying!

Ronni is already on the books for an early June podcast.

I had a great time meeting him last year in Munich, we had a very nice lunch together in a traditional Bavarian spot.

Great guy.  Very down to earth.

Dave, glad you mentioned bitcoin. No need to repeat my case for it, it’s in the archives here….

Here’s an excellent article from the Electronic Freedom Foundation.  It is very specific about why the indictment of Assange is a mortal threat to journalism and transparency overall.  In case it isn’t apparent, I’m totally on the side of the author of this piece, the overall cause of the EFF, as well as the efforts of Julian Assange and Wikileaks in general.

Most dangerously, the indictment contends that anyone who “counsels, commands, induces” (under 18 USC §2, for aiding and abetting) a source to obtain or attempt to obtain classified information violates the Espionage Act, 18 USC § 793(b). Under the language of the statute, this includes literally “anything connected with the national defense,” so long as there is an  “intent or reason to believe that the information is to be used to the injury of the United States, or to the advantage of any foreign nation.” The indictment relies heavily and repeatedly on allegations that Assange “encouraged” his sources to leak documents to Wikileaks, even though he knew that the documents contained national security information.

But encouraging sources and knowingly receiving documents containing classified information are standard journalistic practices, especially among national security reporters. Neither law nor custom has ever required a journalist to be a purely passive, unexpected, or unknowing recipient of a leaked document. And the U.S. government has regularly maintained, in EFF’s own cases and elsewhere, that virtually any release of classified information injures the United States and advantages foreign nations.

That last paragraph was so important to me, I had to bold the entire thing.

The Julian Assange case is “you and me versus the Deep State.”  I’m more than a little concerned that the Deep State will prevail. 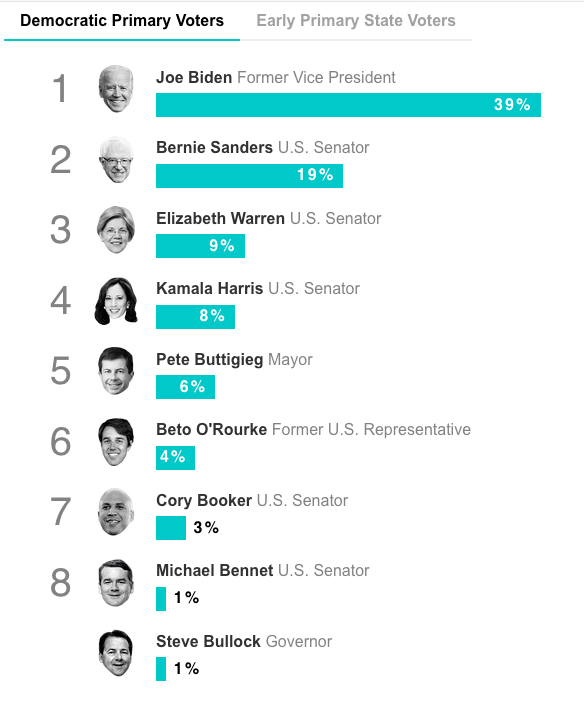 Wiki and Assange are the Trojan Horse to the deep state. I doubt they are interested in letting him go but their problem is that they are also worried about creating a martyr ………. which could be a pin.