The metals sector map looked pretty odd this week – the miners were up, while everything else (led by platinum) fell. Even gold felt the pull lower, although it did the best of all the metals. This was probably fallout from the failure of the US-China trade negotiations – but what’s the explanation for the reasonably good rally in the mining shares?  Especially that rally on Friday, when literally everything “metals” ended up dropping?  Curious.

Gold fell -8.70 [-0.67%] to 1282. All of the damage happened on Thursday and Friday – falling platinum prices might have been a contributing factor to gold’s decline. The spinning top candle was a bearish continuation, and forecaster was unchanged, remaining in a slight downtrend. Gold ended the week in a downtrend in both daily and weekly timeframes. Gold/Euros is in an uptrend in the weekly and monthly timeframes.

COMEX GC open interest rose +29,852 contracts this week. That’s 14 days of global production in new paper. More official intervention, but it seemed to taper off by end of week – the last two days saw some short-covering on the decline.

The commercial net fell by -41k contracts, which was mostly a lot of new shorts (+58k) as well as some new longs (+17k). Managed money net rose +53k contracts, which was mostly new longs (+35k) as well as fewer shorts (-7.5k). Commercials were clearly responsible for stuffing the rally in gold. Gold is nowhere close to a turning point yet from the COT perspective – its going in the opposite direction, in fact. 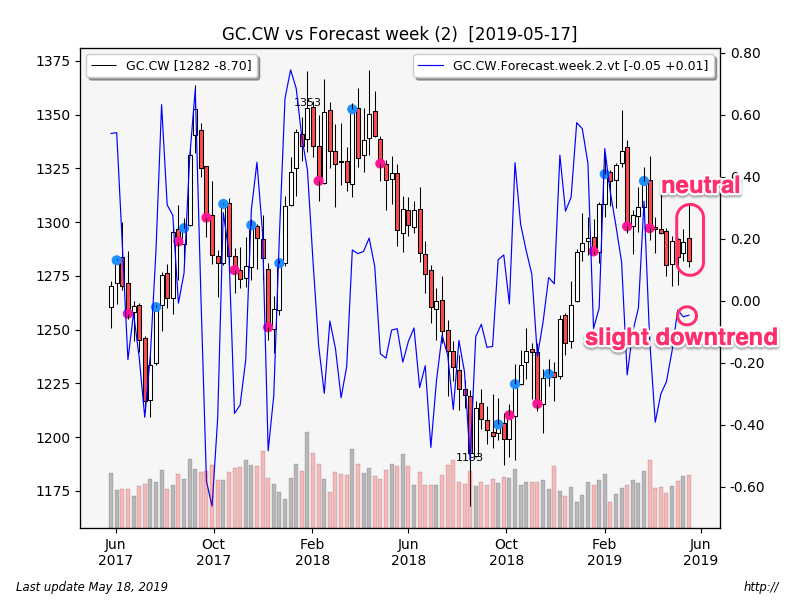 Silver plunged -0.38 [-2.61%] to 14.39. As with gold, all of the damage happened Thursday and Friday, with silver making some dramatic new lows. The long black candle was a bearish continuation, and forecaster plunged deeper into a downtrend. Silver is now in a downtrend in all 3 timeframes.

The gold/silver ratio jumped +1.70 to 88.97. That’s quite bearish. It’s also a new 25-year high. That will matter someday, but apparently not right now.

The commercial net rose +3.8k contracts, which was 1.4k new longs, and 2.4k fewer shorts. Managed money net fell -58 contracts, 924 new longs, and 982 new shorts. This was a very small change. Silver remains at or near a turning point. 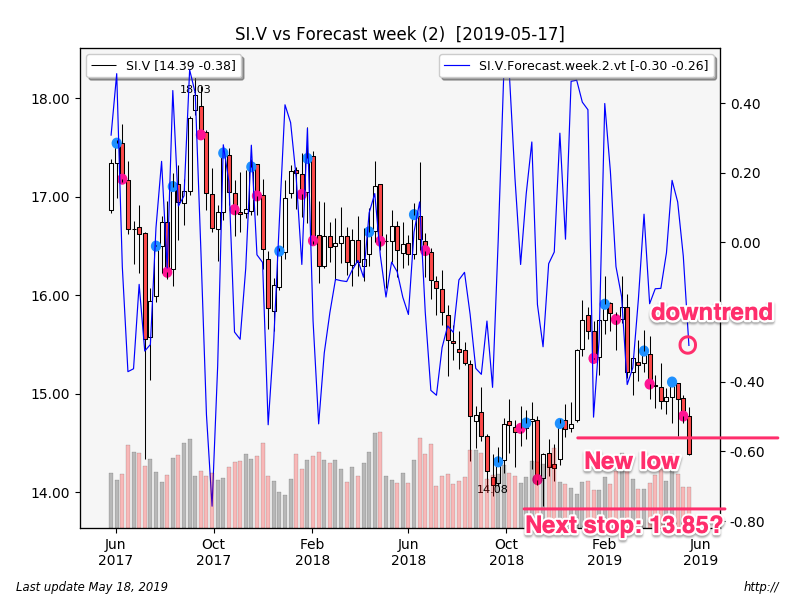 Miners did better than the metal this week, with XAU up +0.30%. On Friday, when silver and gold both sold off fairly hard, XAU was largely unchanged, and GDX actually rallied +0.92%. This very surprising outcome suggests that the selling in gold may be way overdone – and perhaps – is government-sponsored, and the “more free-trading” miner ETFs are a better indicator of actual market sentiment. Well, being long the miners – this is certainly my hope anyway. The short black candle was mildly positive (33% bullish), and forecaster rose, but remains in a downtrend. XAU remains in a downtrend in both daily and weekly timeframes. 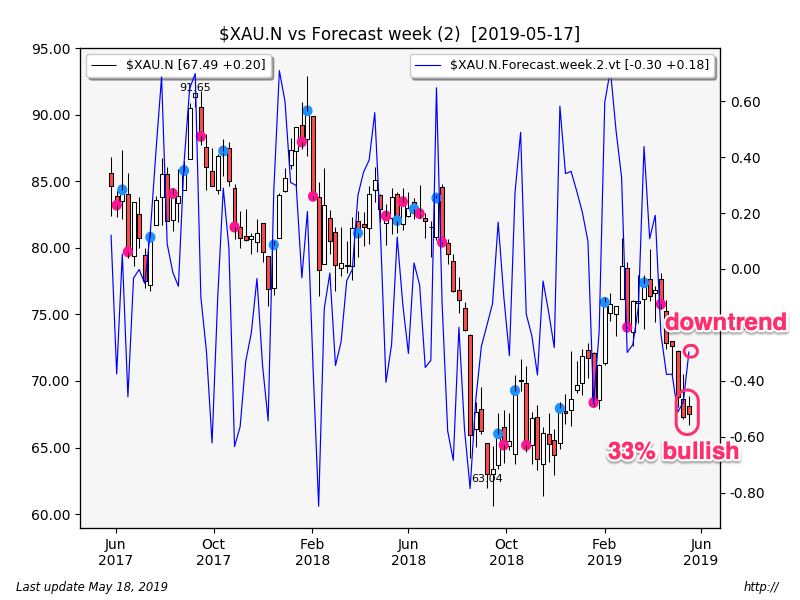 The buck rallied +0.66 [+0.68%] to 97.44 this week, moving higher 4 days out of 5. The closing white marubozu was a bullish continuation, and forecaster was unchanged, remaining in an uptrend. The buck reversed direction, ending the week in an uptrend in all 3 timeframes. The buck is slowly approaching a breakout to new highs.

BRExit appears to be taking GBP down hard, with EUR hit too, while the “problems” in the US-China trade negotiations is weakening CNY – if it keeps going at this rate, it will break out to new highs (vs the buck) next week.  The sharp drop in AUD is also a sign of risk off as well.  This week saw a low for AUD that dates back to early 2016. 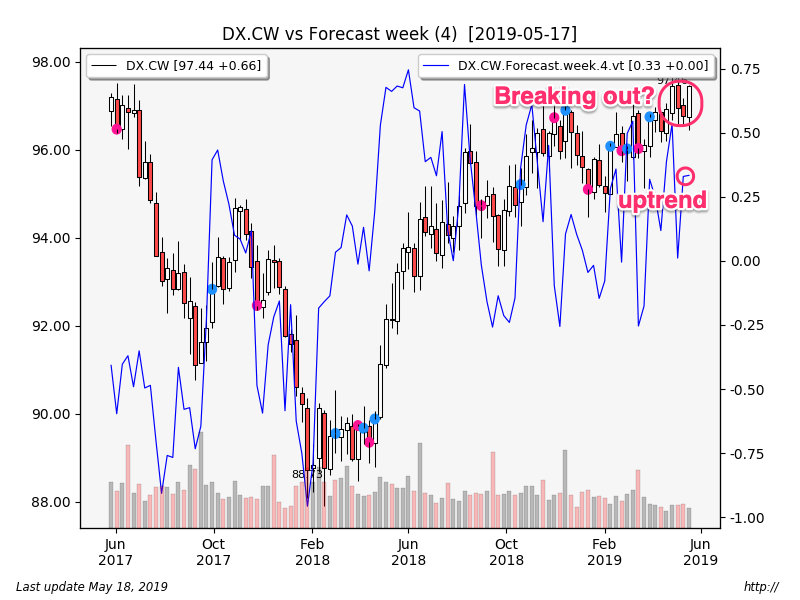 SPX fell -0.76% this week, with all of the plunge coming on Monday. SPX tried to come back during the week, and forecaster moved back into an uptrend on Wednesday’s rally, but Friday’s 16 point drop caused SPX to close below the 50 MA as well as the 9 MA. The weekly long white candle looked strong (53% bullish), but forecaster dropped, taking SPX into a downtrend. SPX ended the week in an uptrend in both daily and monthly timeframes. 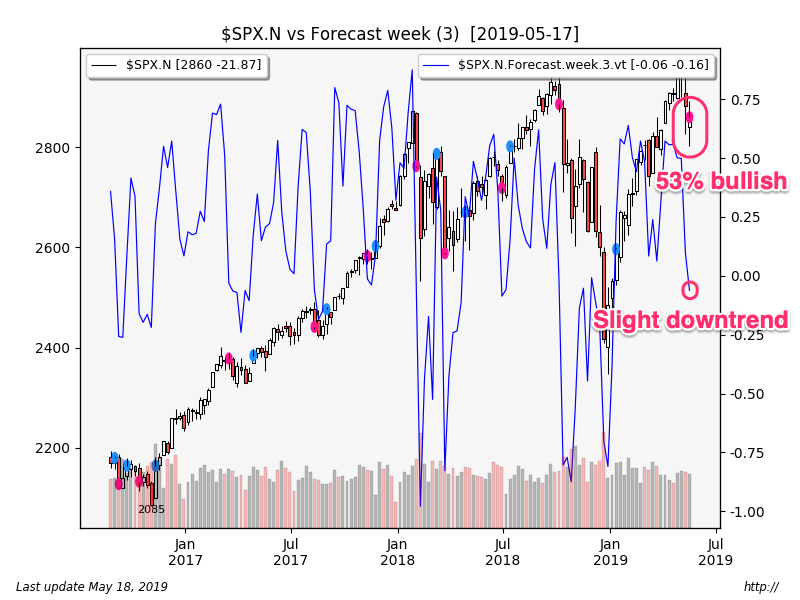 Sector map has utilities and REITs leading, while telecom, financials, and industrials did worst. That’s a bearish sector map.

The US equity market was in the middle of the pack this week; Europe did best, while Latin America did worst.

TLT climbed +0.99% on the week, with the gains coming on the first three days. TLT remains in an uptrend. TY also did well, rising +0.58%, making a new 6-month high by a few pennies. The long white candle was a bullish continuation, and forecaster rose, moving TY into a stronger uptrend. TY remains in an uptrend in all 3 timeframes. The 10-year yield plunged -6.2 bp to 2.39%. Bonds are very close to a breakout – or a yield breakdown. Last time rates were at these levels: January, 2018. 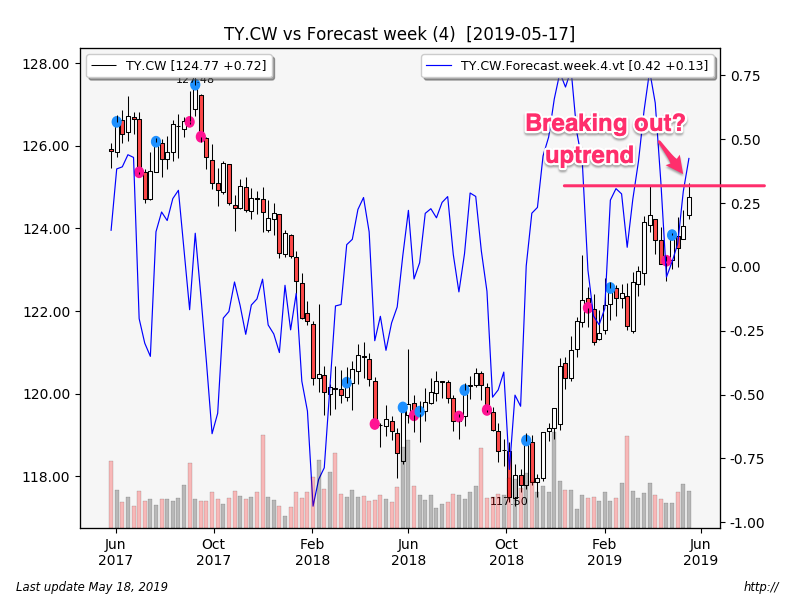 JNK fell -0.32% this week, with the losses all coming on Monday. JNK did manage to rally back, moving back into a daily chart uptrend, but cousin HYB fell too, and it moved into a weekly downtrend, which is where I suspect JNK would be – if I had a weekly forecaster for JNK. The BAA.AAA differential moved higher this week – it may be staging a reversal. Credit markets appear to be tightening just a bit. 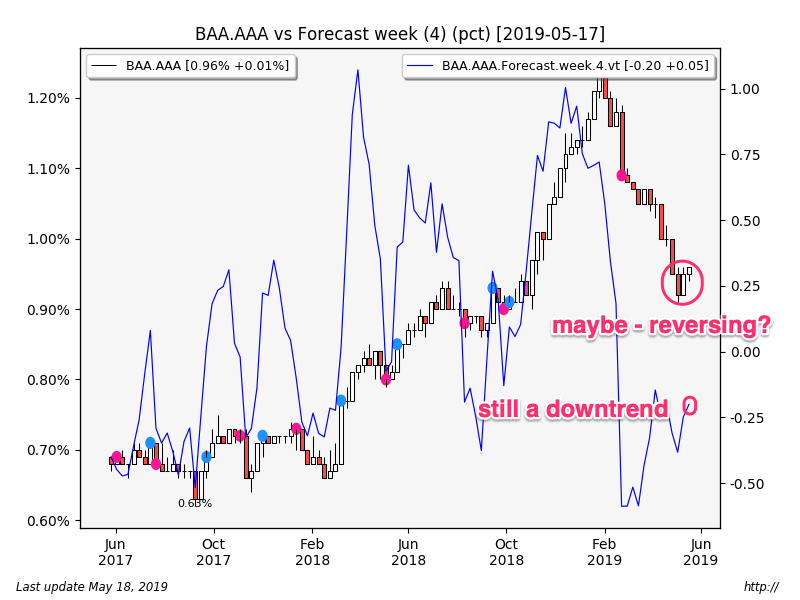 Crude rose +1.04 [+1.68%] on the week, moving higher on Tuesday-Thursday. Crude ended the week back above both the 9 MA and the 50. EIA report looked bearish to me (crude: +5.4m, gasoline: -1.1m, distillates: +0.1m), but the market seemed to approve, causing a reasonably strong rally after release. Maybe that’s still about seasonal refinery maintenance. Weekly Candle print was a long white, which was neutral, and forecaster moved higher, but remains in a slight downtrend. Crude ended the week in an uptrend in both daily and monthly timeframes, and may be about to reverse on the weekly.

Geopolitical news probably also contributed to the bullish move this week; VZ production plunged due to not enough tankers taking away the oil – which was the wrong grade for non-US refiners – along with hints of impending war with Iran. 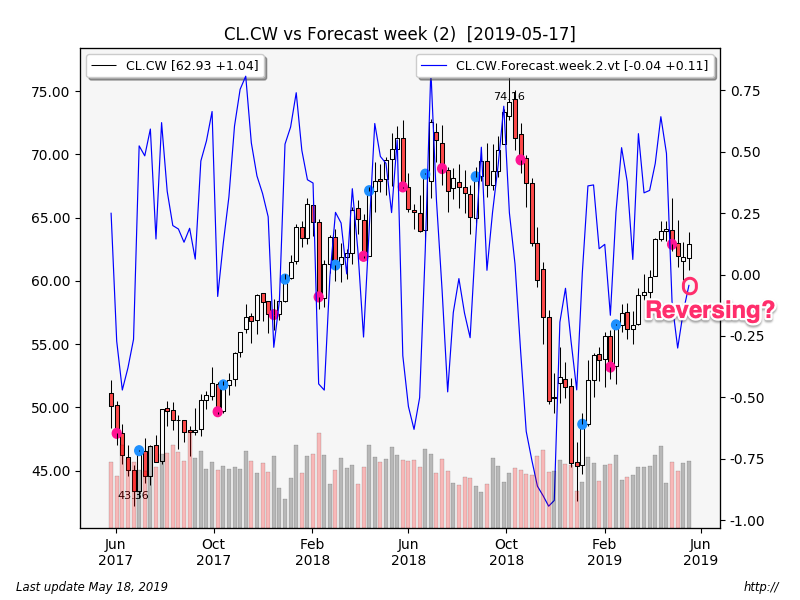 News this week is all recessionary.

This week was the hangover from the US-China trade negotiations failure.  There were some signals that both parties want things to move forward, but it seems that China wants the terms of the deal to remain vague, to both preserve flexibility and avoid humiliation, while the US wants things spelled out – to avoid another 10 years of broken promises, and “too much flexibility.”  Can the two parties square the circle?  Its hard to say.

Independently of the US-China trade issue, there are other perhaps more important things brewing beneath the surface.  My opinion is that SPX is on the edge of a much more serious correction.  Copper and platinum (both in the process of printing evil-looking monthly swing high patterns) are signaling that all is not well.  There are clear recession signs are starting to pop up in the economic data – my favorite is INDPRO, which I’ll include below.  INDPRO quarterly forecaster is now signaling the start of a “goods recession.”  While the skims & scams of the “services” industry (banking, sickcare, legal, among others) may still be doing fine, the areas of the economy that produce real things are starting to tip over.  INDPRO did the same thing in 2001, 2008, and the “recession that wasn’t” back in 2015. 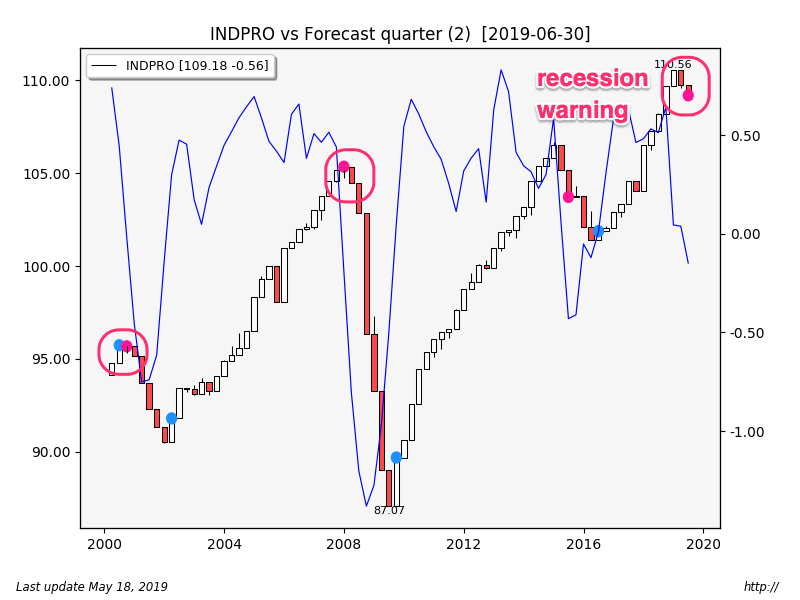 Gold should eventually respond to this situation by rallying, once SPX starts to sell off for real.  The 10-year is breaking out to new highs – even more money will eventually flow into the safe havens and away from risk assets.  Its just a matter of time.  The economic data will eventually prevail, although its hard to know exactly how long the process will take.  Perhaps GDX and the mining shares in general are giving us a clue that gold is about to turn in response, along with the 10-year.

Big bar gold premiums on gold remain low, silver’s premium increased once more – its almost at 4% – while gold ETF discounts shrank. There is no shortage of gold at these prices, but big-bar silver is showing increasing signs of stress.

The COT report for silver continues to suggest we are at or near a low for silver, while the gold COT report is at best neutral.

Silver made yet another 25-year high in the gold/silver ratio.  Someday it will matter, but we might end up re-testing 13.85 before support returns to the metal – and that assumes 13.85 ends up holding.

And…I was able to get my bitcoin data back again, so I’m including it in my list once more.

As always, a great wrap-up to the week.

One quick thing, I ran across this chart of the Ebola crisis, that really brought it home. 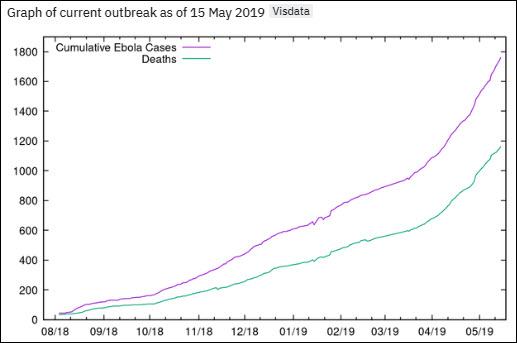 Looks like the data in the chart is older than it says (5-15) because the most recent weekly data you posted says that the infections have leveled off, and this chart is still skying.

But it shows when it all really took off – right around the beginning of April.

Thanks Chris – the funny thing is, my reports tend to write themselves.  I was surprised this week to see just how recessionary things looked.  It really was just thing after thing.  By the time I got to the summary, it all felt bearish.  And after viewing things through the bearish economic lens, Friday’s close on SPX sure looked like a lower high – although that has yet to be confirmed.

Now wouldn’t be a bad time to enter short.  Risk is that China & the US come to an agreement, but that’s looking relatively unlikely at the moment.

Maybe when I get back from vacation I’ll look to see if I can find any “wet paper bags”…perhaps DB…that one looks like it might be going to zero.  We aren’t even in recession yet and its looking really sick.