Nonfarm Payrolls was reasonably strong: headline number was +196k, avg hourly earnings were up +3.1%.  As for recession-predicting “Working Part Time/Economic reasons”, things are mixed.  Two timeseries climbed vs Februrary, a third series dropped, but the overall quarterly number doesn’t look recessionary, as the numbers are lower than in Q4, and are way down from the peak in January.  Quite possibly the January volatility for this series was due to the government shutdown. 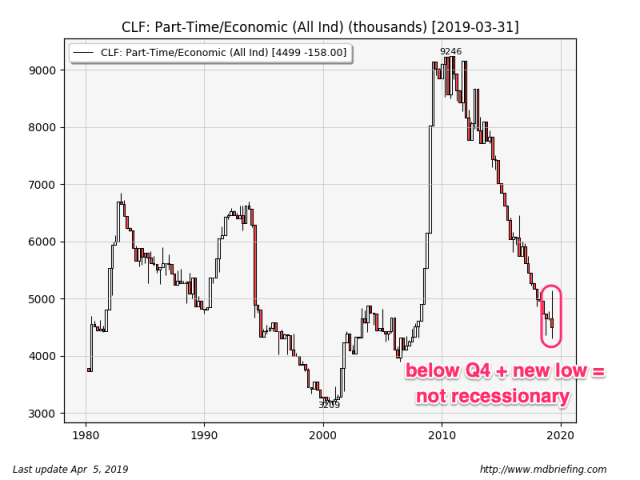 Platinum had a blockbuster week, breaking out to a new yearly high. This is clearly a platinum-only thing, since the rest of the metals hardly moved at all. Most components remain below the 9 and 50 MA lines, although the long term uptrend remains intact, as everything except silver remains above the 200, and all items have executed golden crosses. Miners are leading metal, but gold is leading silver. It is a bit of a confused picture.

Gold fell -0.54 [-0.04%] this week, basically chopping sideways. Gold did make a new low this week, but dip buyers appeared on every drop, and so prices bounced back, regaining most of their losses. The spinning top candle was bullish (60% reversal), but forecaster moved lower, moving deeper into a downtrend. Gold is in a downtrend in both the weekly and monthly timeframes.

Commercial net rose by +33k; that was 55k of short-covering, offset by 22k longs sold also. It was a lot of covering this week. Managed money net fell by -33k, mostly 25k longs sold, but also 9k new shorts. The change in managed money was not as significant. 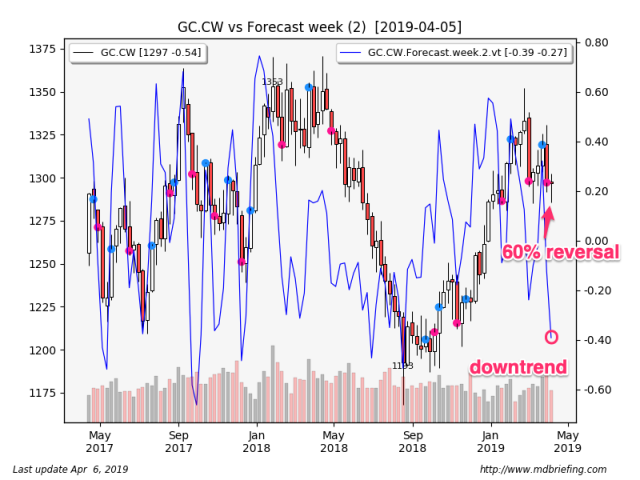 Silver fell -0.02 [-0.13%] to 15.08 this week – like gold, silver spent the week chopping sideways, making new lows but finding buyers every time price dipped below 15. The doji candle was mildly bullish (39% reversal), and forecaster inched higher but remains in a downtrend. Silver daily issued a buy signal Silver ended the week in a downtrend in both weekly and monthly timeframes.

Commercial net rose 12k which was 11k of short-covering and 2k of new long-buying. Managed money net fell by 14k, which was all about new short positions. We could be moving closer to a turning point for silver – we may even be there, depending on how much short-covering occurred on the dip to 14.85 on Thursday. 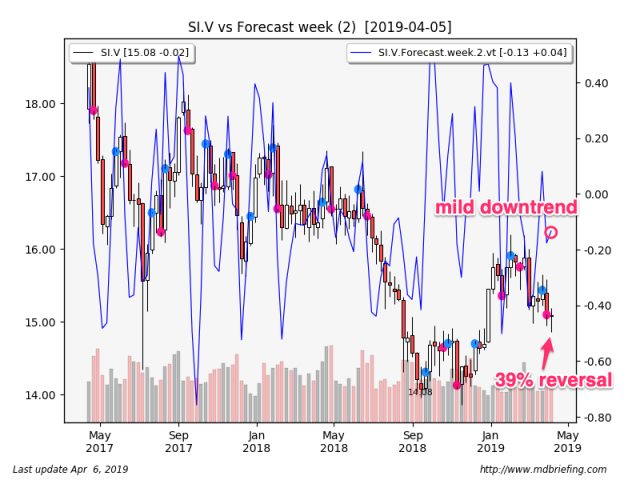 Miners edged higher, with all the gains coming on the big move on Thursday. The doji candle was a bullish continuation, and forecaster moved slightly higher, remaining in an uptrend. XAU remains in an uptrend in all 3 timeframes. Note that the miners are above all 3 moving averages; they look reasonably strong, especially compared to gold and silver. 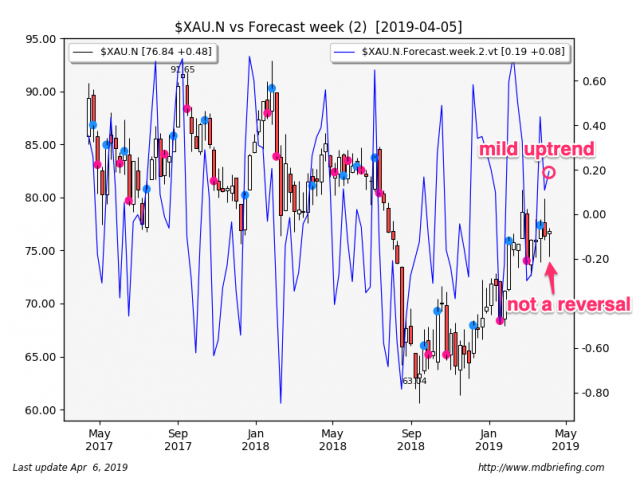 The buck moved up +0.12 [+0.12%] to 96.87. The short white/spinning top could be a reversal (60% bearish), and forecaster moved lower, but remains in an uptrend. DX is in an uptrend in both the weekly and monthly timeframes. The buck remains quite close to a breakout above 97; my guess is, it would probably take a no-deal BRExit to make this happen. 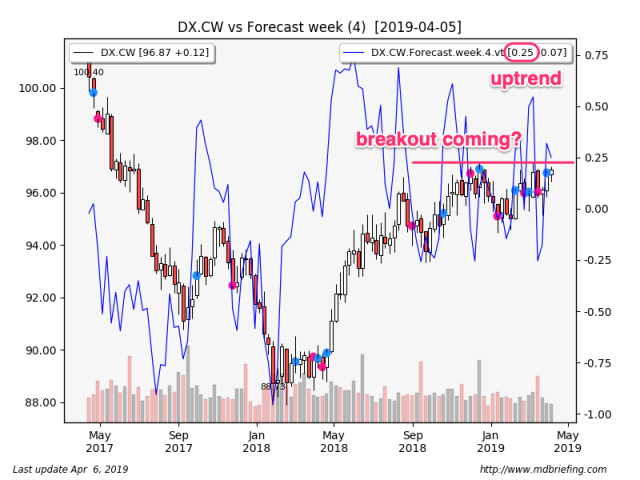 SPX jumped +58.34 [+2.06%] to 2892.74. That’s a new high for SPX. The white marubozu candle was a bullish continuation, and forecaster jumped higher into a reasonably strong uptrend. SPX ended the week in an uptrend in all 3 timeframes.

Homebuilders and materials led – financials and tech did relatively well, while utilities and staples were at the bottom. That’s generally bullish.

The US was the near the bottom this week in global equity market performance. Latin America did best.

TLT plunged -1.91% on the week, a fairly large correction, most of which happened on Monday. TY dropped -0.48%, the swing high pattern was 66% bearish, but forecaster dipped only slightly, and remains in a strong uptrend. TY is in an uptrend in the weekly and monthly timeframes. The 10-year yield rose +8.7 bp to 2.50%.  Is this a near-term top for bonds?  Possibly. 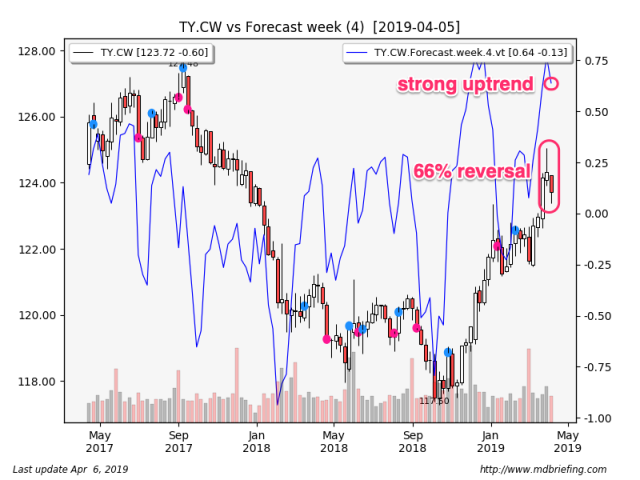 JNK was unchanged; JNK continues to move sideways. Junky cousin HYB fell -0.47%, and its forecaster issued a sell signal. BAA debt fell also – the yield rose 6 bp on the week, which is less than the 10-year’s move. This tells us that the BAA.AAA differential fell, which is a sign of a relaxing credit market. The differential is back down to 1.03%, which is down 20 bp from its peak back in January. 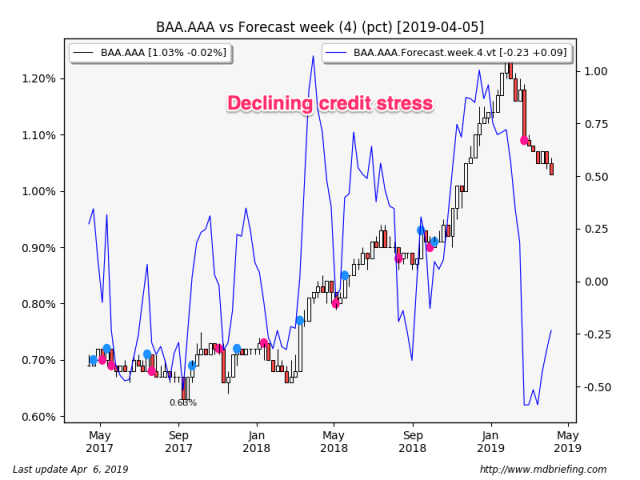 Crude rallied +3.00 [+4.97%] to 63.33. Crude broke out on Monday, and really never looked back. Even a bearish-looking EIA report (crude: +7.2m, gasoline: -1.8m, distillates: -2.0m) wasn’t enough to derail this week’s rally.  Crude’s whilte marubozu candle was a bullish continuation, and forecaster dipped slightly but remains in a strong uptrend.   Crude is in an uptrend in all 3 timeframes.  The rising volume on rising prices is a sign of strength for crude. 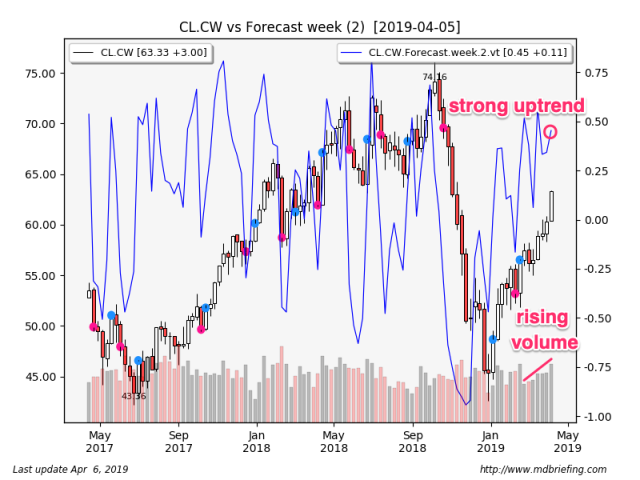 * Premium for physical (via Bullion Vault: https://www.bullionvault.com/gold_market.do#!/orderboard) vs spot gold (loco New York, via Kitco: https://www.kitco.com/charts/livegoldnewyork.html) shows $1 premium for gold, and a 5 cent premium for silver.

Last week the metals were hit with selling pressure that was probably options-and-futures expiration-related, but this week that pressure disappeared.  Platinum staged a dramatic breakout, crude rallied sharply, and so did the closely-connected-to-crude SPX.  There were new highs for all three items.  Bonds may be reversing lower, and the credit differential is telling us that credit stress is declining.  Lastly, the market’s projection of FOMC rate increases has also declined.

Economic indicators also support a “no recession right now” picture, at least in the US, and possibly China, which appears as though it might be starting to recover.  Most likely that Chinese recovery, such as it is, comes from a lot of money printing by the Chinese government.  Europe does look recessionary, especially German manufacturing; my guess is that’s about BRExit uncertainty, although it is always hard to be sure.  Germany will suffer most from a no-deal BRExit.

Big bar gold premiums on gold remain low, while ETF discounts increased. There is no shortage of gold or silver at these prices.

Will we see a breakout to new highs for SPX?  We are less than 50 points away.  When things are looking up, its a bit tough for either gold or bonds to do well.

No reversal yet for the metals, at least on the weekly timeframe anyway.

Unemployment is near 3% and President Trump is calling for rate cuts and quantitative easing. Is the economy doing well or getting ready to tank? Financial writer John Rubino says, “We went from being at all-time highs to down 20% in sort of a flash crash in two months towards the end of last year. That told the Fed and the other central banks that they can never tighten again. This is it for this cycle and for the entire remaining time of today’s financial system for higher interest rates. They abruptly announced to never mind about those four rate hikes that were going to happen in 2019. We (the Fed) are not going to do anything. If we do anything, it will be in the opposite direction and cut interest rates and a new round of QE, etcetera and etcetera. The stock market went right back up to record levels. . . . The end part of this story is how good all this is for gold. . . . The next thing from the Fed will be a rate cut, and it will increase and not decrease its balance sheet. . . . We are going to go preemptively to monetary easing, and that’s really new. This is very, very new. You normally don’t do this. You wait until you see a bear market and a slowdown in the economy that gets people laid off before you start aggressively easing. Apparently, we are going to do that stuff before that stuff starts happening. Who knows what the impact of that will be? If it works the way they want, more people will get hired, wages will pick up and we’ll have inflation in the 4% or 5% range before you know it.”

So, with near record low yields on bonds and near record high prices for stocks, Rubino has just one question. Rubino says, “What’s cheap? Gold and silver. What is down and what is cheap relative to the fundamentals. It’s not just the price of gold and silver, it’s how much gold and silver exists relative to how much paper wealth is in the world. The amount of gold and silver that we are bringing out of the ground is growing at 1% or 2% per year. The amount of paper wealth in the world is growing exponentially. . . .Gold is moving back into the center of the global financial system.”

Another big factor to consider is debt. Rubino says, “Every big country is running deficits that are dramatically bigger than they were five years ago. In the U.S., we are back to $1 trillion a year deficits, which is Obama Administration post Great Recession kind of numbers, and we are doing it 10 years into an expansion. . . . So, in the next recession, we will be taking on huge amounts of new debt at an accelerating rate. We are not fixing any of the mistakes . . . which mean the problems that are going to flow from today’s mistakes are going to be that much bigger because we are compounding yesterday’s mistakes. . . . This is new and scary and fascinating. From a safe distance, this is going to be very interesting to watch. Unfortunately, for most people, they will not be a safe distance. They will be right in the middle of the tornado.

In closing, Rubino says, “It is possible that a garden variety one year recession would blow up the financial markets. That’s the stuff that they are hearing (in the White House) that is terrifying. . . . There are probably older and wiser people whispering in Trump’s ear who are saying the next equities bear market might be the end of the financial world for us. . . . They are so worried, they are will to experiment with monetary policy again in order to prevent the crash that could make them this generation’s Herbert Hoover.”

and they didn’t even mention peak oil rearing it’s ugly head again with the recent news on KSA’s ghawar complex.

While gold is cheap relative to SPX, there are other things are much cheaper than gold right now.  Some things are really, really cheap.  Take for instance the price of the world’s largest provider of offshore contract drilling services.  It is bouncing off 25-year lows.  How’s that for cheap? 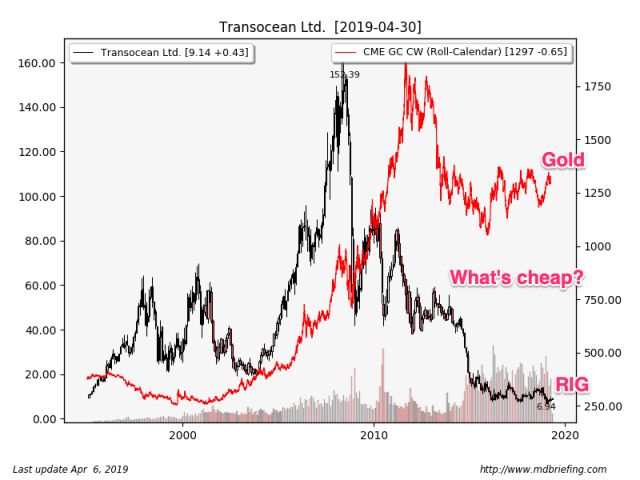