The metals looked mostly positive this week; split this week; palladium was the star, but below that, silver led gold higher, and the juniors led the seniors higher. What’s more, gold/Euros looked quite strong – it was near the top of the list. This tells us that gold is rallying right alongside the dollar, a relatively rare event. My guess: people across the pond are buying gold. Most items are back above the 9 MA line, which is a positive sign too.

Gold rallied +11.02 [+0.86%] to 1291.01. Gold printed a daily swing low on Thursday, which resulted in the daily forecaster flipping into an uptrend. Gold also printed a weekly bullish harami that looked quite strong (48% reversal), and while the forecaster moved higher, it remains in a downtrend. Gold is in a downtrend in both weekly and monthly timeframes.  Here’s the GC chart – gold in dollars. 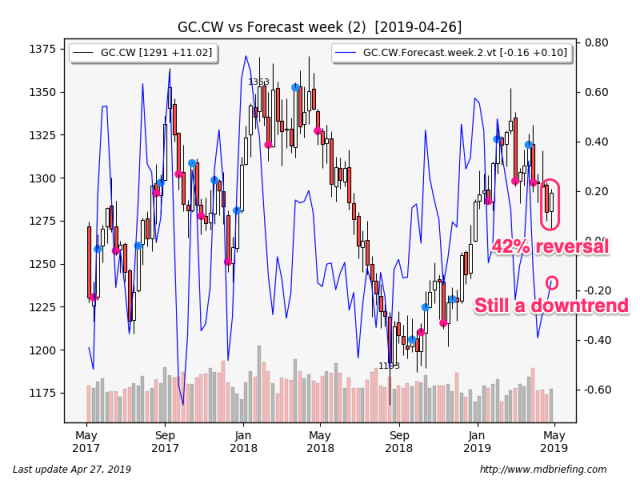 Perhaps more importantly, gold/Euros is looking substantially stronger. GC.EUR daily flipped to an uptrend on Wednesday, the weekly forecaster did so this week as well, which leaves GC.EUR in an uptrend in all 3 timeframes.  Here’s GC.EUR monthly.  Do you see anything other than just a pause in an uptrend here?  Forecaster doesn’t.  The bid for gold remains in place across the pond. 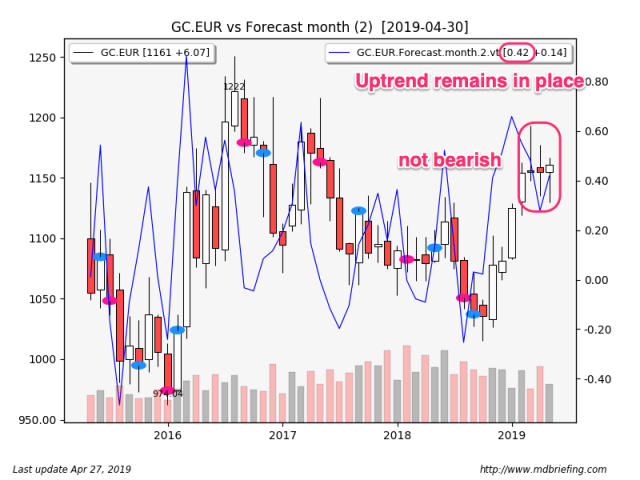 The commercial net rose by 21k contracts, which was mostly shorts covered (-12k) but also new longs (+9k). Managed money net fell by -18k contracts which was mostly new shorts (+11k) but also fewer longs (-7k). Managed money longs are quite near levels which might be reversal territory, while commercial shorts have fallen substantially, but the position isn’t quite as strongly bullish. We could reverse here, but the way I read the tea leaves, the COT report is only mildly supportive of that – more of an “interim low” rather than a “major low”.

Silver climbed +0.15 [+1.04%] to 15.12. The confirmed bullish NR7 weekly print looked reasonably strong (49% bullish), and forecaster flipped to an uptrend as well. The large rally on Friday accounted for all of silver’s gains this week. Silver is now in an uptrend in all 3 timeframes. What’s more, silver managed to break up and through its downtrend line and close above both the 200 MA and round number 15 on Friday too. This all looks really bullish to me – especially in the face of a strong dollar move, and a drop in the price of copper [-0.94%], which usually has a reasonably strong influence on silver.

One note: my calculations for silver use the front month volume-weighted contract rather than the calendar weighting I use for gold; on Friday, the front month rolled, which resulted in an additional 7 cent gain.

COMEX SI open interest plunged -19,431 contracts this week. That probably has to do with the upcoming contract roll. 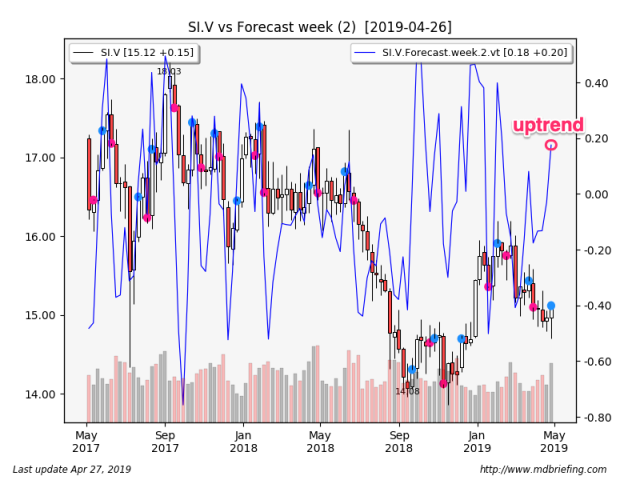 Miners fell -0.33% this week, underperforming both gold and silver. On Friday, XAU printed a very strong daily swing low (62% reversal), and the weekly takuri line was also strong (58% reversal). Daily forecaster moved into an uptrend on Friday, while the weekly remains mired in a downtrend. XAU is now in an uptrend in both the daily and month timeframes. We are seeing some signs of a reversal in the miners, although they are lagging behind the metals. The juniors look much stronger than the seniors this week – and that’s always a good sign. 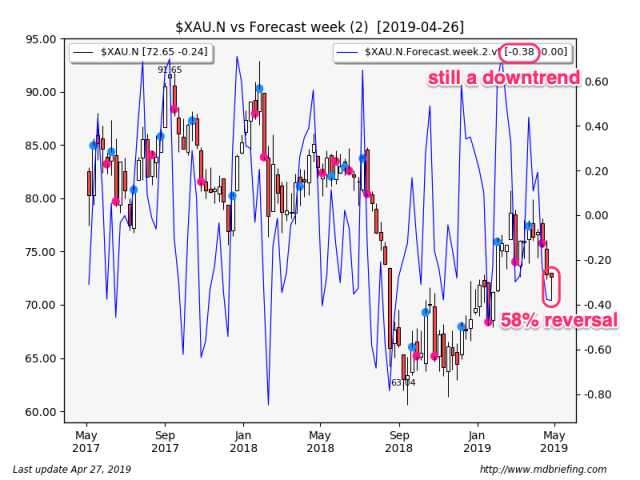 The buck rallied +0.53[+0.55%] to 97.46, making a new multi-year high this week. Most of the gains came on Wednesday’s big breakout. The long white candle was a bullish continuation, and forecaster moved higher, and is now in a strong uptrend. The buck remains in an uptrend in all 3 timeframes. 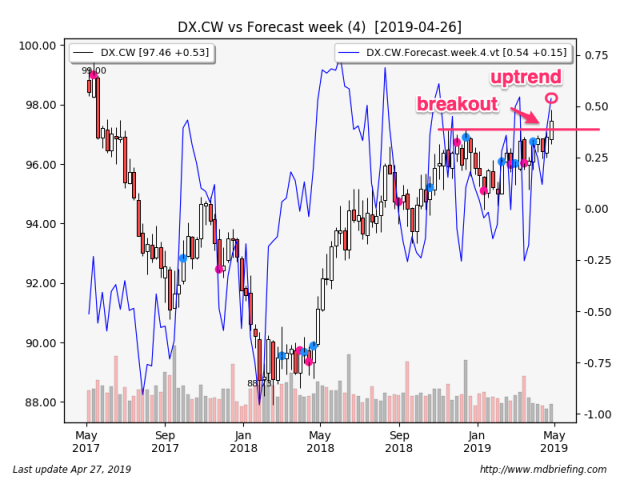 SPX rose +34.85 [+1.20%] to 2939.88. SPX made a new all time high on Friday. The white marubozu was a bullish continuation, and forecaster inched lower but remains in a strong uptrend. SPX remains in an uptrend in all 3 timeframes.

Sector map had sickcare and REITs leading, while homebuilders and telecom did worst. Sector map was neutral this week – maybe slightly bullish.

The US equity market was the best-performing market this week. 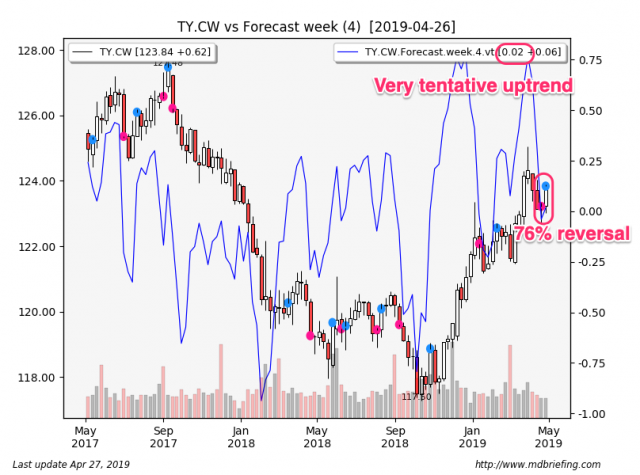 JNK rose +0.22%, making a new multi-year high on Friday. Both JNK and cousin HYB remain in uptrends. the daily forecaster issuing a sell signal on Thursday. BAA yields fell 1 bp, and remains in a downtrend – although the downtrend is weakening. The BAA.AAA differential dropped 1 bp, and it too remains in a downtrend. The credit markets continue to suggest any danger is slowly receding. 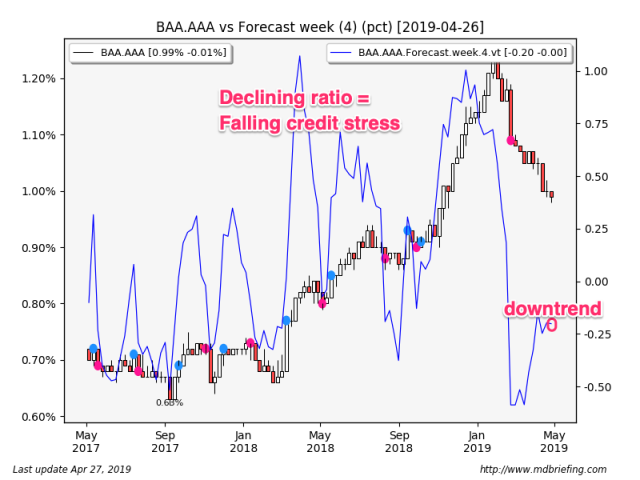 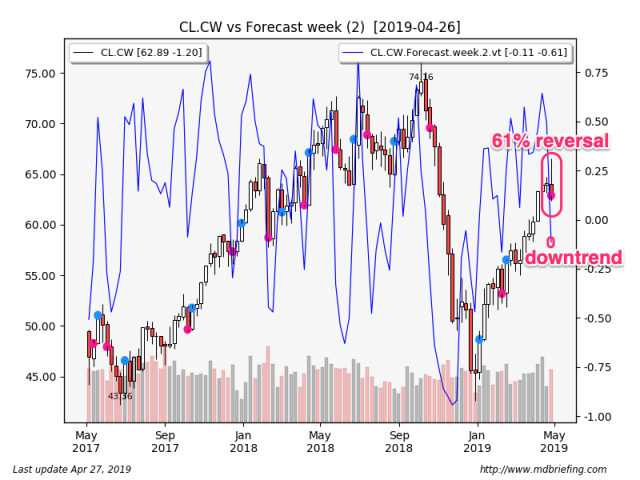 * Premium for physical (via Bullion Vault: https://www.bullionvault.com/gold_market.do#!/orderboard) vs spot gold (loco New York, via Kitco: https://www.kitco.com/charts/livegoldnewyork.html) shows a $1 premium for gold, and no premium for silver.

Here were the economic reports this week:

Housing continues to do poorly, goods continue to do poorly, while services (which includes sickcare) are doing well. So far at least, the US remains out of recession.

Gold, silver, and the miners all reversed on the daily chart this Friday, more likely that not, and there were hints of reversals in all three on the weekly as well.  Nothing certain, but things looked cautiously positive.  Silver’s close above 15 was an especially good sign.  What’s more, gold in Euros looks quite strong, suggesting that gold continues to have a reasonably strong bid across the pond.

Equities made new all time highs, junky debt rose, and the 10-year also may be reversing higher too, all while the dollar broke out to new multi-year highs.  It seems certain that money is flowing to the US and parking in various places – when everything goes up along with the buck, that’s my go-to explanation.

Big bar gold premiums on gold remain low, and silver’s premium decreased fairly significantly as silver rallied.   Most ETF discounts increased. There is no shortage of gold or silver at these prices.

Gold’s COT position is improving but it still is not at an explicit turning point.  Silver could well be at a turning point right now.

Housing continues to decline, but that’s the only bad news in the recession watch this week.  Credit differential continues to signal a relaxing credit environment.

Curiously, we see an increasing chance in rate cuts here in the US, alongside a strong GDP print.  Perhaps the market doesn’t buy the print – most likely, it doesn’t.  Also, the 1-10 spread is also contracting once more.  That’s another financial market signal of concern.

Gold surprised me this week with the move higher.  GIven the mostly-happy news in the rest of the markets, the bid underneath gold and especially silver was not something I expected.  I’m cautiously optimistic for next week.

Here’s an article written by AEP on the twin sanction regimes that Trump has taken on: in Venezuela, and Iran.  AEP has also noticed that Ghawar is in decline, which makes the piece especially relevant to us here at PP.

Donald Trump’s double strangulation of Iran and Venezuela is reducing spare capacity in the global oil markets to wafer-thin levels very fast. If anything goes wrong in the geopolitical cauldron of world energy over the next six months, we will discover whether Saudi Arabia really is capable of cranking up an extra 2 million barrels a day of crude.

What we learnt from the rare glimpse of Saudi Aramco’s books this month is that the legendary Ghawar field is badly depleted. It cannot pump more that 3.8m barrels a day. This is a first-order shock. The company has always asserted with magisterial confidence that it can produce 5m barrels a day without difficulty.

Jean-Louis Le Mee, from Westbeck Capital, says the physical oil markets are on fire. They are heading for a supply deficit of 1.3m barrels a day by the third quarter even if OPEC matches every barrel of lost oil from Iran sanctions. “These numbers should have every investor worried,” he said.

Global spare capacity is arguably as low today as it was during the great oil shocks of the last half century. We are skating on thin ice.

You’ve a great way of boiling things down… and this was my favourite line: