It was a down week for most of the metals; junior miners dropped more than seniors, silver dropped more than gold. That all looks relatively bearish.  Most items have dropped through both 9 and 50 MA lines, with silver looking weakest.  From the standpoint of the moving averages, platinum and copper look strongest.

Gold fell -1.50 [-0.12%] this week, basically unchanged. Gold spent the first half of the week rallying, which was then offset by Thursday’s big plunge. The weekly print was a gravestone doji, which was distinctly bearish, while forecaster ticked higher, but remains in a downtrend. Monthly forecaster issued a sell signal, which puts gold in a downtrend in all 3 timeframes.

The COT report shows a small change in the commercial net, dropping 15k contracts, while managed money net rose by 12k. That was 5k in short-covering, and 7k in new longs.  No turning point for gold right now from the perspective of the COT report. 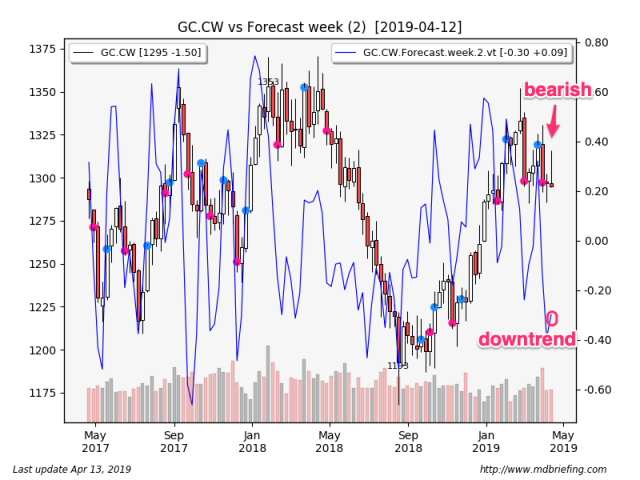 Silver dropped -0.15 [-0.99%] on the week; silver rallied anemically in the first part of the week, and then dropped hard on Thursday, making a new low. The weekly spinning top candle was a bearish continuation, and forecaster moved sideways but remains in a mild downtrend. Silver is in a downtrend in both the daily and weekly timeframes.

Commercial net fell by -3k, which was 6k new longs, but 10k new shorts.  Managed money net fell by 808 contracts, which was 1.8k shorts covered, and 2.6k longs sold.  Silver backed off its turning point a bit this week. 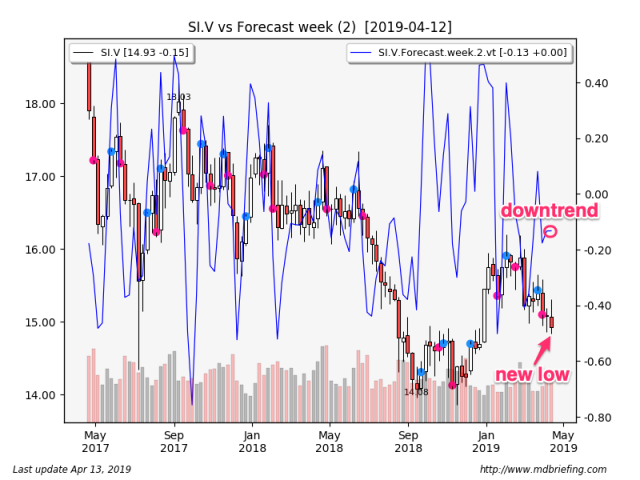 Miners topped out early in the week, but avoided any large losses on Thursday’s big move down. XAU dropped -1.38%, the weekly long black candle was a bearish continuation, and forecaster fell, resulting in a sell signal for the miners. XAU is now in a downtrend in both the daily and weekly timeframes, with the monthly right on the edge of a sell signal of its own. 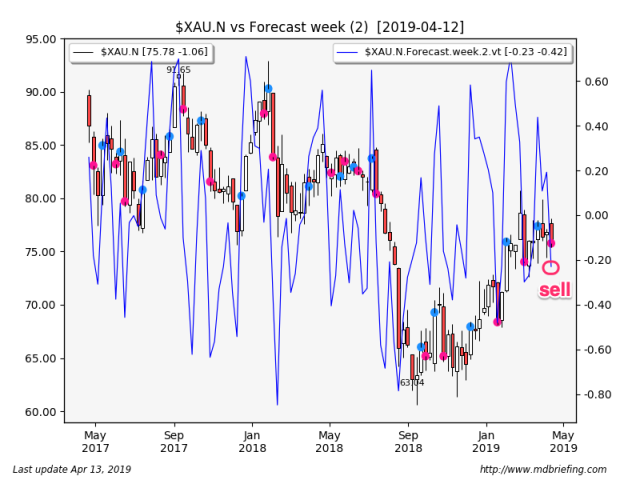 The buck dropped -0.45 [-0.46%] to 96.42. The big move down happened on Monday. The short black candle was neutral, and the forecaster dropped, but remains in a mild uptrend. The buck remains in an uptrend in both the weekly and monthly timeframes. Overall, the buck could be topping out here – but it hasn’t done so just yet. 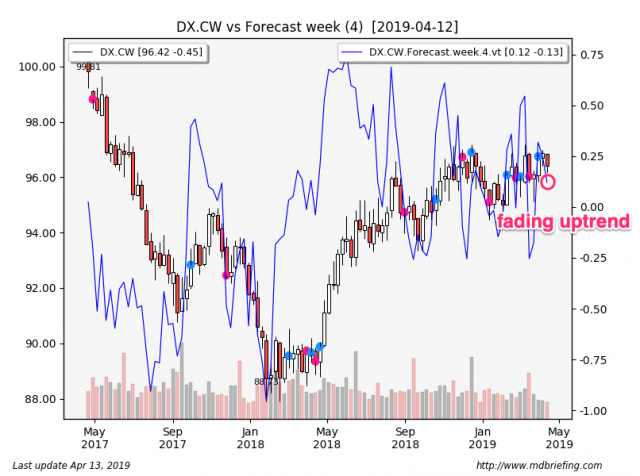 SPX rose +14.67 [+0.51%] to 2907.41. The short white candle was a bullish continuation, and forecaster inched lower, but remains in a reasonably strong uptrend. SPX remains in an uptrend in all 3 timeframes.

Financials were on the top of the heap, along with telecom and tech, while sickcare, energy, and utilites brought up the rear. This was a fairly bullish sector map.

The US equity market was in the middle of the pack this week.

TLT fell -1.10%, with most of those losses coming on Friday. TLT is in a clear downtrend. TY also plunged, losing -0.46%. The closing black marubozu was a bearish continuation, and forecaster fell, but it was not enough for a sell signal. While TY daily is now in a downtrend, TY remains in an uptrend in the weekly and monthly timeframes. The 10-year yield rose +5.9 bp to 2.56%. 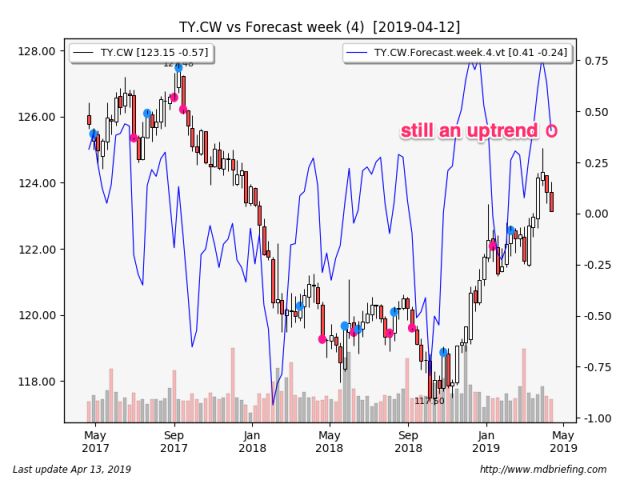 JNK climbed +0.70%, a strong gain that moved JNK back above the previous high set in September 2018. BAA yields fell slightly, down 1 bp on the week. The BAA.AAA differential fell 2 bp, which continues to suggest a relaxing credit environment. 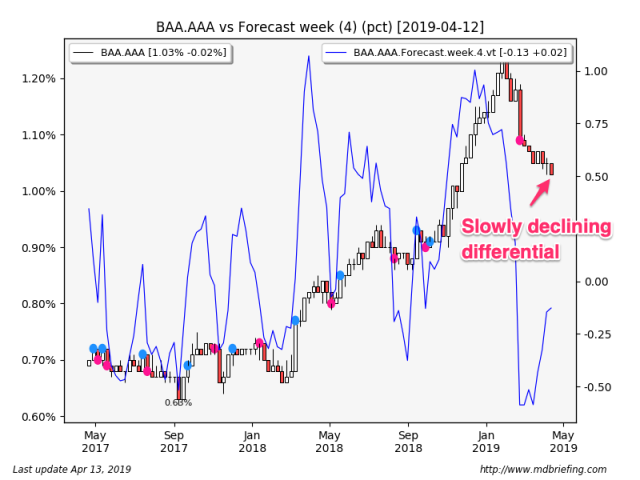 Crude rose +0.61 [+0.96%] to 63.94. While there were hints of bearishness on Thursday (daily forecaster issued a sell signal), crude remains in a strong uptrend in both the weekly and monthly timeframes, and the short white candle was a bullish continuation. This week’s EIA report was mixed (crude: +7m, gasoline: -7.7m, distillates: -0.1m), and it did not seem to do more than cause some momentary volatility intraday. There were hints that OPEC may be starting to consider removing its production cuts; that caused some selling pressure on Thursday.  Even so, that weekly uptrend still looks remarkably strong. 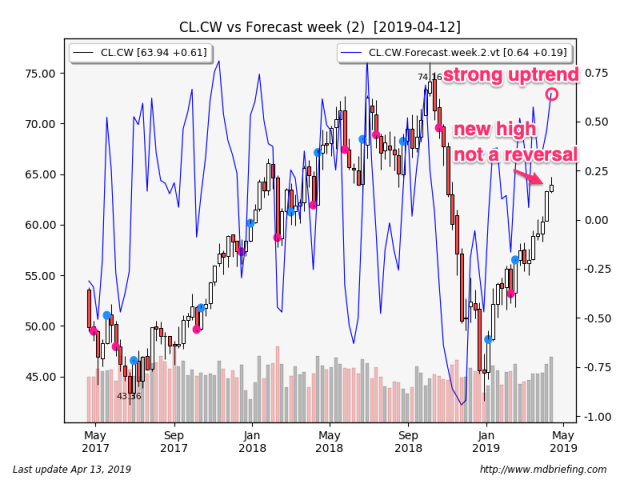 * Premium for physical (via Bullion Vault: https://www.bullionvault.com/gold_market.do#!/orderboard) vs spot gold (loco New York, via Kitco: https://www.kitco.com/charts/livegoldnewyork.html) shows a $2 premium for gold, and a 4 cent premium for silver.

All the safe havens declined this week; the 10-year, gold, miners, as well as the BAA.AAA differential.  Chances of a rate cut also declined.  SPX rose, the buck fell, junky debt rallied.  SPX is approaching a breakout to new all time highs.  The overall picture is a return to risk on.  Not even a falling dollar could get the metals to rally.  That’s not a great sign.

Big bar gold premiums on gold remain low, the premiums on silver jumped higher, while the ETF discounts increased. There is no shortage of gold or silver at these prices, although I’m keeping an eye on those big silver bars.

The COT reports don’t show gold at any sort of turning point, silver is not there yet either, and there was not much change in positioning this week – given the 3 day delay in the COT reporting.

Silver is the weakest of the PM group right now.  Shorts are piling in, likely Managed Money, hoping to force a more serious breakdown to the previous low at 13.85.  Its hard to know if the dip buyers will be strong enough for silver to avoid this fate.  Most likely the commercials will cover their short positions as prices fall – what happens with silver probably depends on just how enthusiastically they do so.  If last week’s strong bid doesn’t show up next week, the next stop for silver is probably down around 14.