This week saw a rally in the other metals – palladium and platinum – but gold and silver went nowhere.  Most items are above all 3 moving averages, and have executed golden crosses, so all that looks fairly positive.  Not much changed this week – just that both gold and silver are looking a bit weak.

Gold rose +4.06 [+0.31%] this week. Gold managed to move briefly above the 50 MA on Wednesday following the ECB meeting (“negative rates forever”) but then fell relatively hard on Thursday. The weekly swing low could be a bullish reversal (60% chance), while forecaster moved higher, but came up a bit short of a buy signal. Gold is now in a downtrend in both the daily and weekly timeframes.

The COT report shows little change in the commercial net – commercials increased both shorts (+31k) and longs (+36k) by a roughly similar amount. Managed money changes were smaller – mostly it was managed money going short (+11k). The COT is not suggesting any sort of turning point right now. 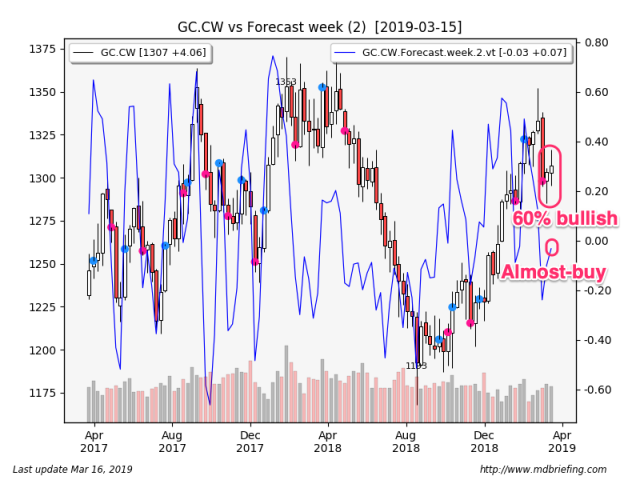 Silver fell -0.07 [-0.46%] this week. All of the damage happened on Thursday – it was a big down day, and Friday’s rally only managed to claw back some of the losses. The weekly high wave candle was a bearish continuation, and forecaster moved higher, but not enough for a buy signal. Silver ended the week in a downtrend in all 3 timeframes. 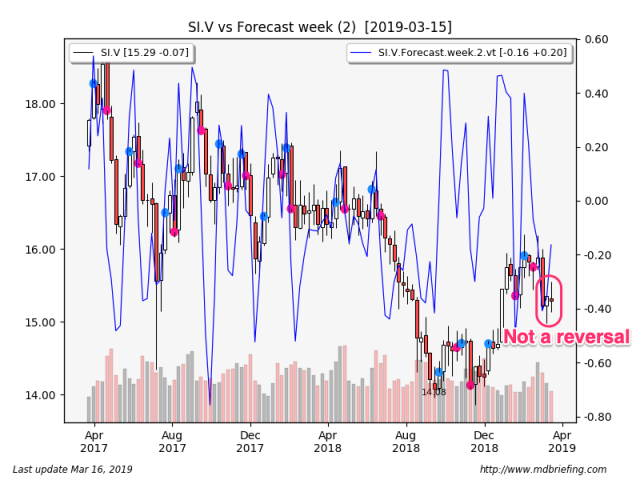 Miners were little changed this week; XAU rose +0.26%, which barely shows up on the chart at all. The long legged doji was neutral, while forecaster did manage to rise, but it was not enough for a buy signal. XAU ended the week in a downtrend in both the daily and weekly timeframes. 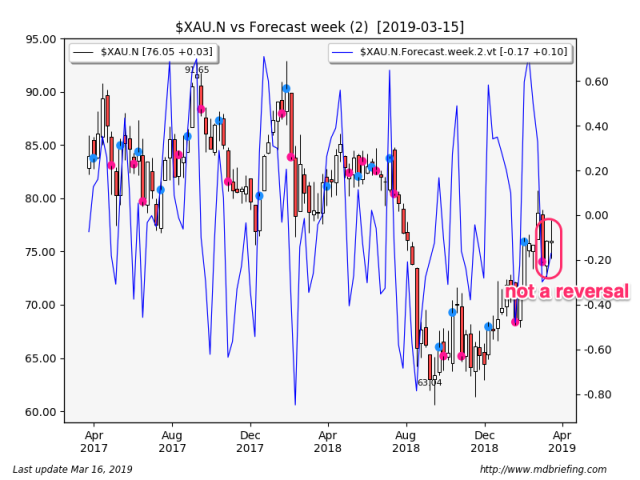 The buck fell -0.75 [-0.77%] to 96.03. This week’s plunge almost entirely unwound last week’s rally. The dark cloud cover candle was somewhat bearish (36% reversal) and forecaster dropped hard issuing a weekly sell signal. The buck ended the week in a downtrend in both daily and weekly timeframes. So much for that breakout to new highs. Perhaps that only happens on a hard BRExit. 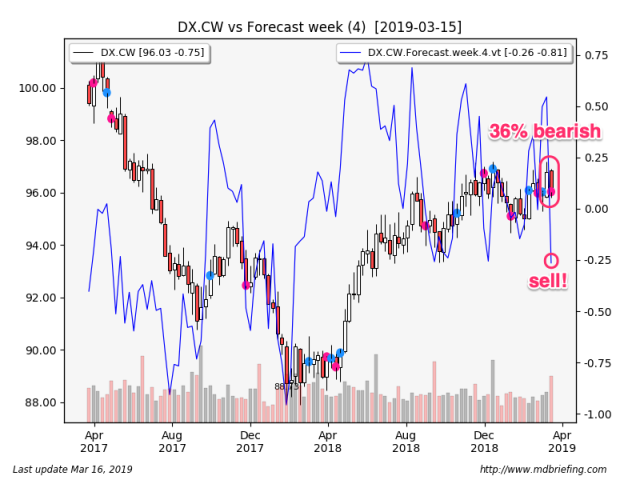 Brexit, yellow vest protests, Salvini, Orban, Trump, and now AOC – all signs that the status quo is coming undone. 10 years of asset-boosting money printing, negative rates, along with wage-destroying globalization and migration have led to some pretty unequal outcomes.

Even if Brexit doesn’t happen today, I think it is just a matter of time before it does. I’m only looking at the longer term trend here.  It is towards the national and away from the global.

SPX jumped +79.41 [+2.89%] to 2822.48. SPX made a new high this week, erasing last week’s correction and then some. The long white candle was a bullish continuation, and forecaster moved slightly higher, remaining in a shallow uptrend. SPX ended the week in an uptrend in all 3 timeframes.

Tech and sickcare led, with financials not far behind, while defense did worst – that was about Boeing, which saw another 737 MAX 8 crash which caused BA stock to plunge by 10%. Ouch.

The US was second from the bottom in terms of regional equity moves. This week’s equity market rally was a worldwide thing, not just something that happened in the US.

TLT moved up +0.15%, which was very little change. TLT ended the week in an uptrend, and above all 3 moving averages. TY climbed +0.21%, making a new high on Friday. The spinning top candle was a bullish continuation, and the forecaster moved higher into its uptrend. TY is engaging in a slow-motion breakout – this, in the face of a reasonably strong equity market breakout. The 10-year yield fell -3.2 bp to 2.59%. What is going on with bonds? How can they be rallying along with equities? I don’t know. 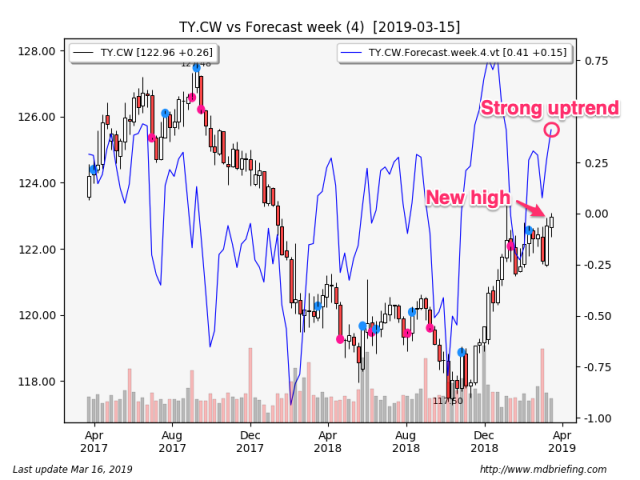 JNK rose +0.73%, just failing to make a new high. JNK isn’t quite as enthusiastic about risk on as are equities, but it remains in an uptrend – as does cousin HYB.

An article (https://oilprice.com/Energy/Crude-Oil/US-Oil-Production-Is-Headed-For-A-Quick-Decline.html) suggested that US shale was going to decline next year, due to a fairly dramatic drop in the money being raised by the shale producers. Money invested leads to oil production with a 2 year lag – so a drop in money invested will lead to reduced production by 2020. 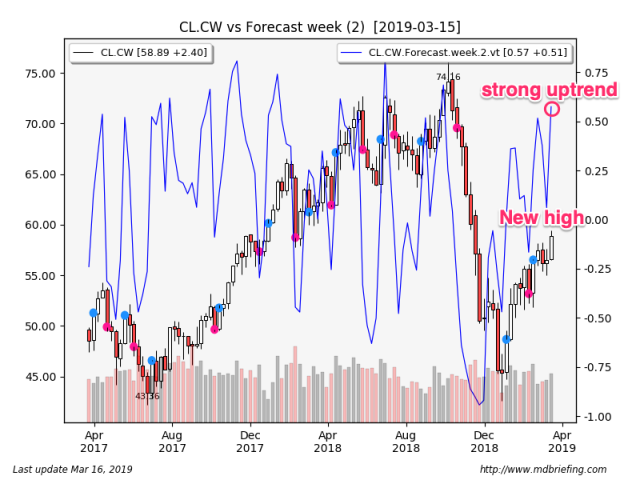 * Premium for physical (via Bullion Vault: https://www.bullionvault.com/gold_market.do#!/orderboard) vs spot gold (loco New York, via Kitco: https://www.kitco.com/charts/livegoldnewyork.html) shows a $3 discount for gold, and no premium for silver.

This week was all about the rally in both equities and crude – and these days, crude seems to have a strong effect on equity prices. The buck moved lower, mostly due to the hope that the UK wouldn’t be actually leaving the EU after all – but the drop in the buck didn’t seem to help gold and silver much at all.

Big bar gold premiums on gold remain low, and most ETF discounts declined. There is no shortage of gold or silver at these prices.

The COT reports don’t show either gold or silver at any sort of turning point, and there was not much change in positioning this week.

The big puzzle for me is the slow-motion breakout in the 10-year Treasury.  How can that be happening alongside the move higher in equities?  It does seem as though money continues to flow into bonds – this while the Fed is rolling off its balance sheet, and the US government is running record deficits.  And this week, the buck even fell, signaling that money left the US.  Bonds are a bet – on the currency, fallling rates and a falling economy.

It sure seems as though big money is betting on a recession.  So how is that recession watch going?

The INDPRO release showed a very minor increase: +0.15%, which is almost the same as going nowhere.  More or less the same thing for PPIACO – basically sideways movement.  Retail sales: same thing.  No improvement, but no decline.  So things haven’t become worse, but neither have they become better.

But that interest rate cut forecast in the futures market definitely suggests that the big money is slowly becoming more bearish about the overall economy – in spite of higher equity prices.