The metals sector map shows gold leading silver lower, and the miners leading the metals lower. This is a mixed sector map, but a generally bearish one. All PM items are below both the 9 and 50 MA lines, which says they are in medium-term downtrends. Last week’s reversal has been unwound.

Gold fell -6.31 [-0.43%] to 1468.61. The spinning top candle was neutral, and while forecaster moved higher, it remains in a downtrend. Gold daily entered a downtrend on Thursday. Gold is back in a downtrend in all 3 timeframes, as is gold/Euros.

The Dec 2019 forecast is now looking at a rate increase: 7% chance.

COMEX GC open interest fell -7,842 contracts on Friday, and -15,914 contracts this week. We are finally starting to see some short covering as prices start to modestly decline. Current open interest for gold: 86% of global annual production, a decrease of -2%.

Commercial net fell -18k contracts, which was +14k new shorts, and -3k fewer longs. That’s another new all time high for commercial shorts. It is very unusual for commercial shorts to peak during a price decline – as in, I’ve never seen it happen. But it is happening now, at least through Wednesday anyway. Managed money net rose +20k contracts, which was +12k new longs, and -7k fewer shorts. It is my belief that official intervention is driving the unprecedented activity of the commercials at this time. 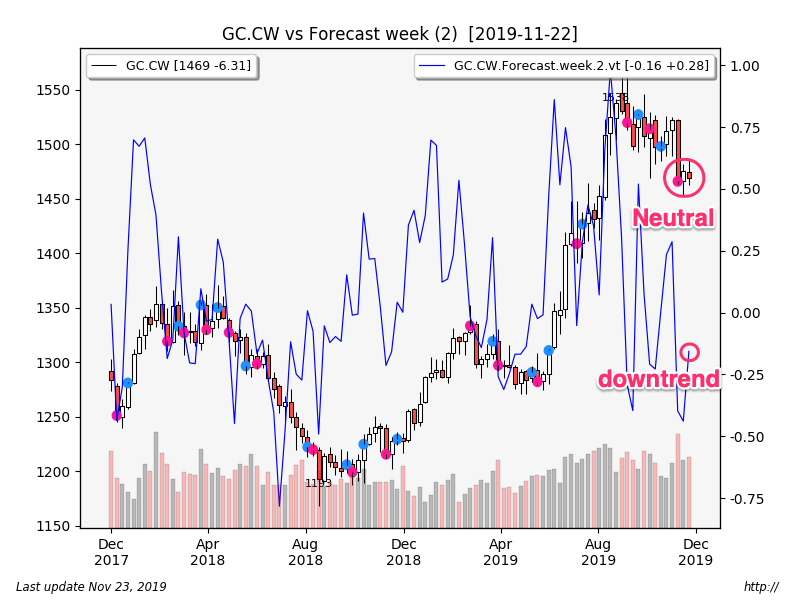 Silver rose +0.06 [+0.35%] to 17.11. The doji candle was neutral, and forecaster jumped into an uptrend. Silver daily dropped into a downtrend on Thursday; silver ended the week in an uptrend in both weekly and monthly timeframes. 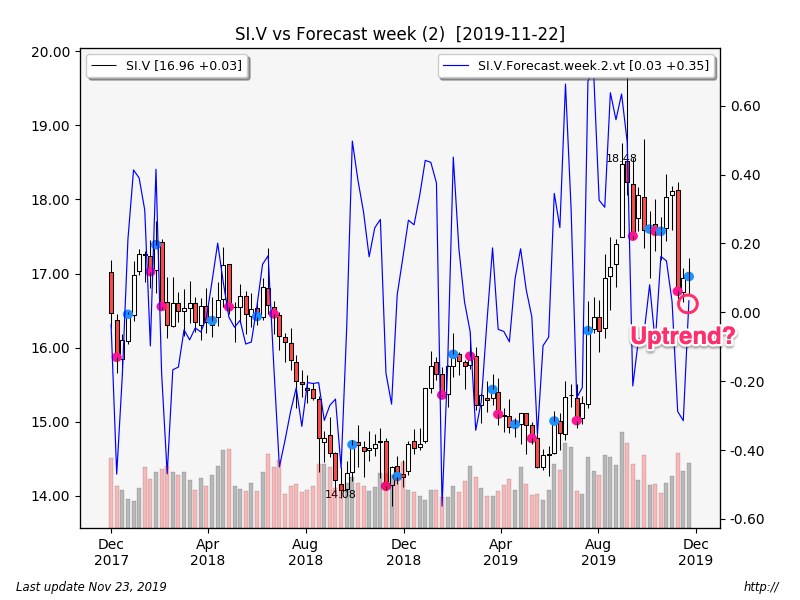 Miners inched up +0.05%, the doji candle was slightly bearish (31%), and forecaster was unchanged, remaining in a slight downtrend. XAU daily dropped into a downtrend on Thursday, resulting in the miners ending the week in a downtrend in both daily and weekly timeframes. 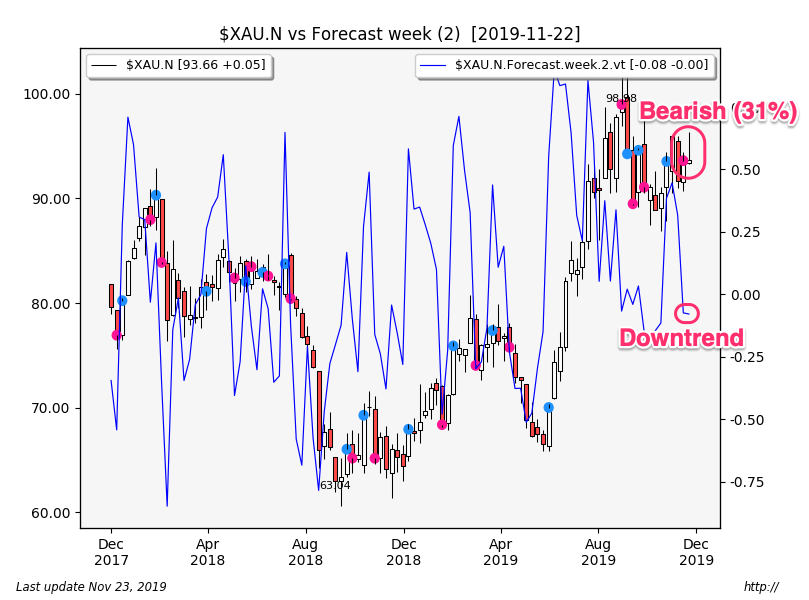 The buck rose +0.27 [+0.28%] to 97.85. The spinning top candle was bullish (40%) and forecaster inched higher but remains in a downtrend. DX daily moved back into an uptrend on Thursday, resulting in the buck ending the week in an uptrend in both daily and monthly timeframes. The buck is now back above all 3 moving averages as well.

What is the dollar strength all about? I think it might be caused by the projections for a rate increase (!) which I do not take seriously, but it is a reflection of the relative strength of the US economy, and the assessment that the rate cuts really are at an end, at least in the near term anyway. This whole thesis doesn’t help gold at all. 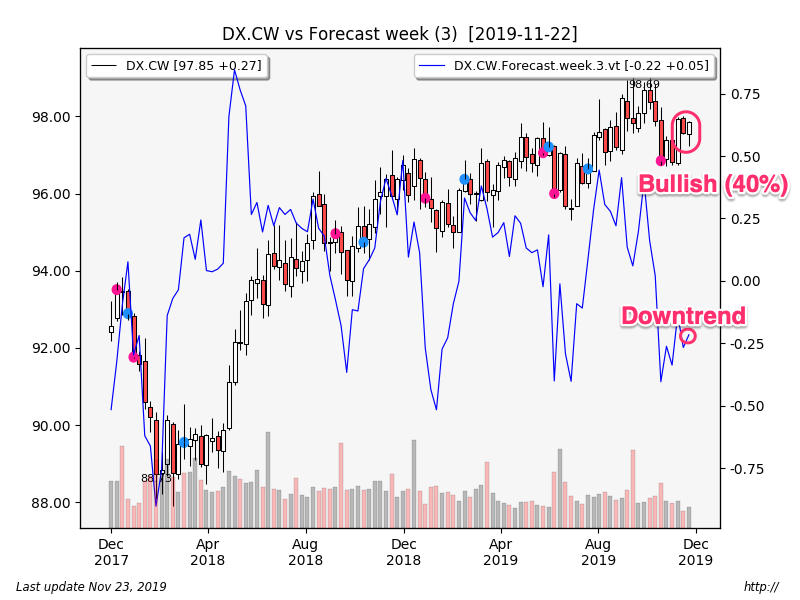 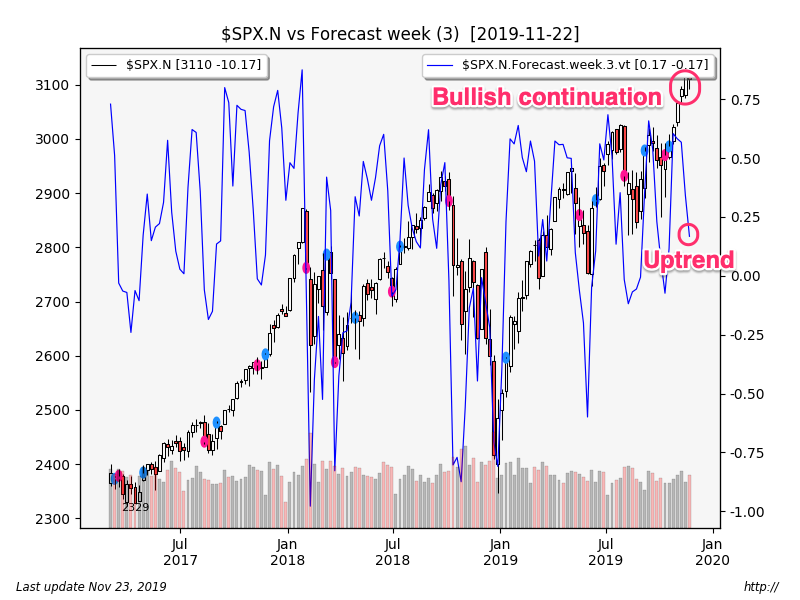 This week, sickcare and financials did best, while materials and REITs were at the bottom. This was a mixed sector map.

TLT jumped +1.55%, the long white candle was a bullish continuation, and forecaster ended the week in an uptrend. The 30-year yield dropped -9 bp to 2.22%.

TY rose +0.26%, the spinning top was a bullish continuation, and forecaster moved into an uptrend. TY is now in an uptrend in both daily and weekly timeframes.

DGS10, the 10 year yield, fell -6 bp to 1.77%. The opening black marubozu was a bearish continuation, and forecaster dropped into a downtrend. DGS10 is now split: downtrend on the weekly, uptrend on the monthly. Reminder: yield uptrend = bond downtrend.

While gold has resumed its downtrend, it appears as though bonds may have reversed. 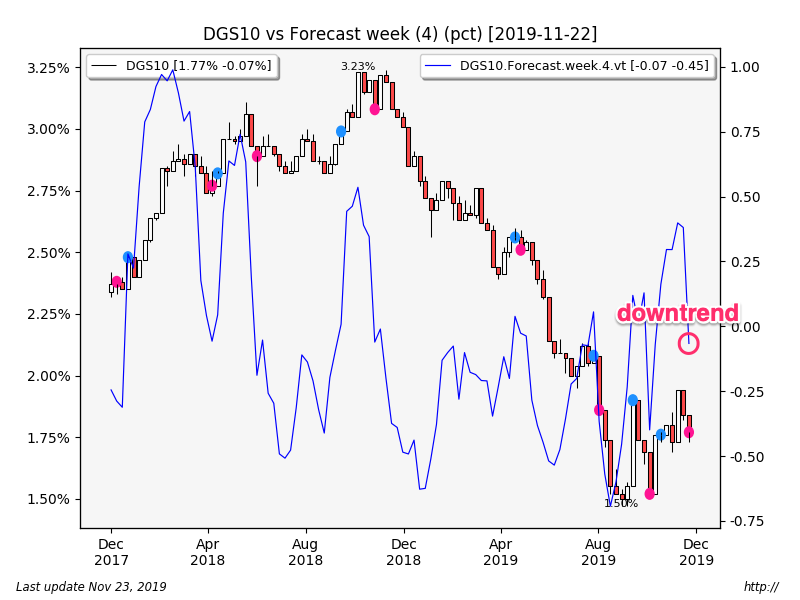 JNK fell -0.25%, the hammer candle was a bearish continuation, while forecaster ended the week in a downtrend. Friday saw a swing low print for JNK on the daily chart (bullish 60%) so that might portend a bullish reversal for JNK. BAA.AAA differential rose +1 bp to +88 bp. There are still no real worries about debt quality right now.

Crude fell -0.09 [-0.16%] this week, largely unchanged after trading in a fairly large trading range. The doji candle was a bullish continuation, and forecaster edged lower but remains in an uptrend. Crude ended the week in an uptrend in all 3 timeframes.

The EIA report on Wednesday was mildly bearish: crude +1.4m, gasoline +1.8m, distillates: -1.0m, but it was a distinct improvement over the API report on Thursday, and it was responsible for the large reversal that happened on Wednesday. 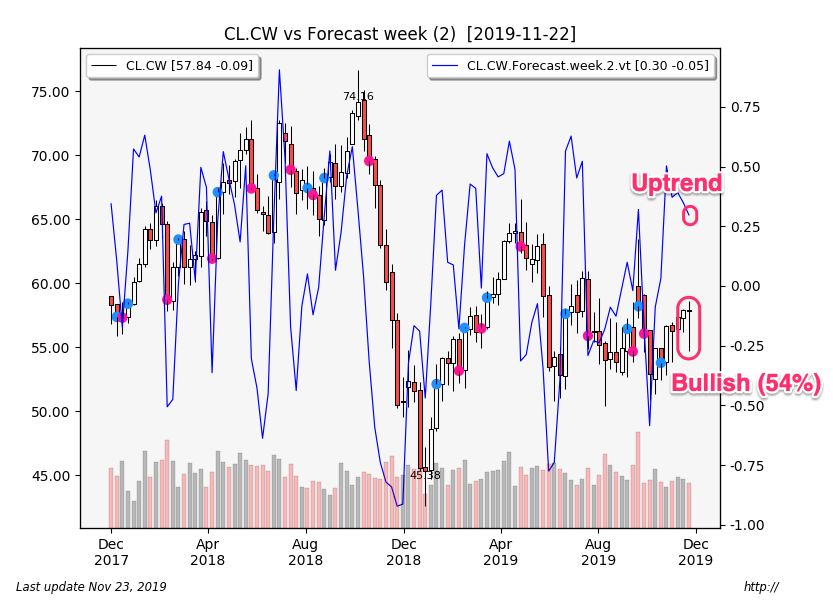 * Premium for physical (via Bullion Vault: https://www.bullionvault.com/gold_market.do#!/orderboard) vs spot gold (loco New York, via Kitco: https://www.kitco.com/charts/livegoldnewyork.html) shows a $1 premium for gold, and a 5 cent premium for silver.

Gold and silver dropped back into downtrends this week, while bonds appear to have reversed. The US-China trade deal got even more iffy, what with the Hong Kong Human Rights and Democracy Act passing Congress, and Trump stating that tariff rollbacks won’t happen unless China stops stealing IP and forcing tech transfers. The CCP trotted out Xi to say nice things about the trade deal, but how long that glow lasts is an open question. The HKHRDA act passed both the House and Senate with a veto-proof majority, and there were threats by the CCP to retaliate if passage occurred. There are an estimated 85,000 US citizens living in Hong Kong, within easy reach of the PLA. Will we see Friendly Xi or PLA retaliation?

US consumer sentiment remains positive, the PMI flash numbers project mild expansion, and the Fed looks set to – if not raise rates, at least it won’t be cutting them in December.

The Fed’s Not-QE program went into reverse this week. Are things improving? Maybe they are. Or maybe it was just a reaction move in a longer-term uptrend. I will continue to keep a close eye on the numbers.

Big bar premiums on gold and silver have actually increased, while ETF discounts have shrunk. It appears as though gold buyers are buying the dip. This is a positive sign.

Gold OI fell for the first time this week; at the same time, the commercial short position hit a new all time high; the divergence could be due to the lag in COT reporting. Even so, this sharp increase in commercial shorts during a price decline is “very unusual” (i.e. it has never happened before in history). Either the banksters have changed their highly profitable operational paradigm, or this is not a commercial actor going short. Evidence: the chart below. 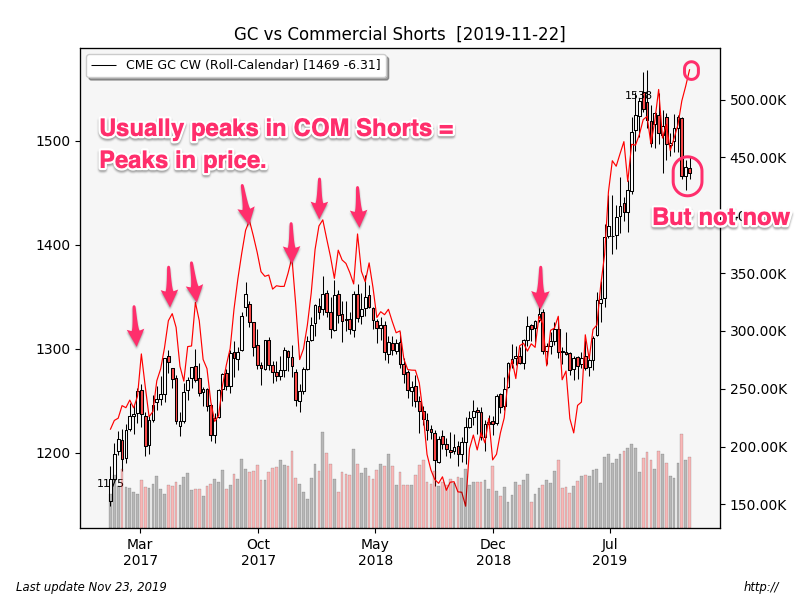 Tinfoil hat time: what if Trump found out about the PPT, and has decided to employ them in service to his US-China trade deal? “Keep the markets moving higher – pound gold if you have to – in order to paint a happy picture of the US economy, in order to encourage China to come to the table and sign this deal which we all know would be good for the country and in the national interest.”

And one last thing. Bitcoin broke below its longer term 7500 support this week. There is a lot of “air” underneath this support level; hard support is down at 3000. Not saying it goes there but…longer term traders have seen price drop from 19k down to 3k before. On the other hand, the very fact I’ve posted a bitcoin chart – first time in years – may well mark the low. 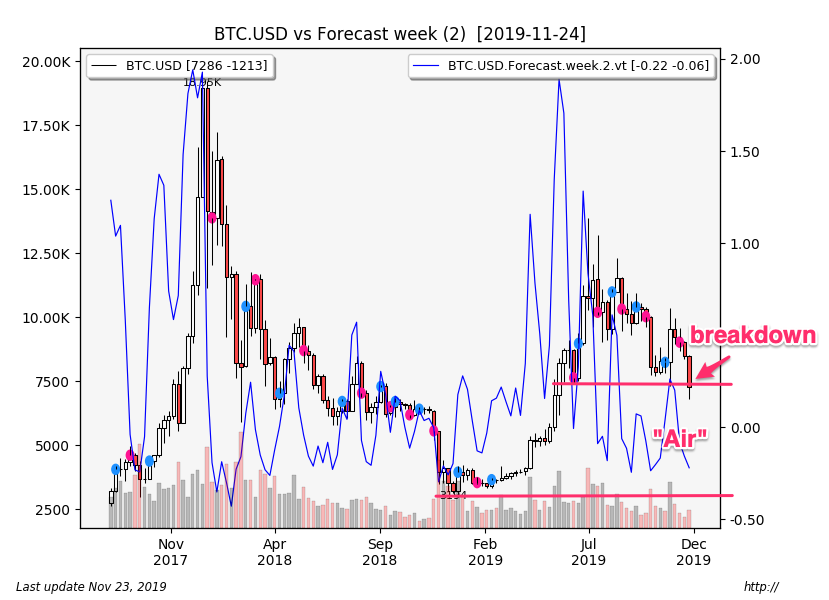 Thanks for posting the chart of BTC. Support/resistance levels around $6200 and $4500 pop out to me.  $6200 seems baked in, $4500 maybe. But given the rampant interest in BTC here (heh), please post BTC charts as regularly as oil, SPX and gold…