What was the good news? Trump announced a possible meeting with Xi sometime in March. He also said that if there was enough progress in the next few days, he would extend the March 1 deadline, and that China has agreed to buy more US ag products – Trump says it will be the “biggest farm deal ever made.” Biggest. Deal. Ever.

The metals sector map shows a clear resurgence for the China-related metals; copper led, along with platinum and palladium. Silver led gold, and the miners led the metal, which is overall bullish for PM. All items are now above all 3 moving averages. The PM correction following the release of the FOMC minutes on Wednesday did not seem to affect the sector map at all.  And…for sure, something is up with palladium.  Craig Hemke of TF Metals suggests there might be a “failure to deliver” due to a shortage of palladium at COMEX.  Boy, I haven’t heard those three words in a long time: failure to deliver.  Hmmm.

Gold rose +6.59 [+0.50%] on the week, breaking out on Tuesday, and then retracing back to the breakout point on Thursday where it seemed to find support. While the weekly candle was a shooting star, it was not a bearish reversal – although daily gold forecaster did issue a sell signal after the drop on Thursday, as did gold/Euros. Does it mean anything? Looking at the weekly chart, the uptrend remains in place, although it has weakened somewhat. Given all the good news in the US-China trade negotiations, that’s really not a bad performance at all. Gold remains above all 3 moving averages, and in an uptrend in both the weekly and monthly timeframes.

COMEX GC open interest rose +25,118 contracts this week. Most of that came on the day of the breakout – Tuesday. 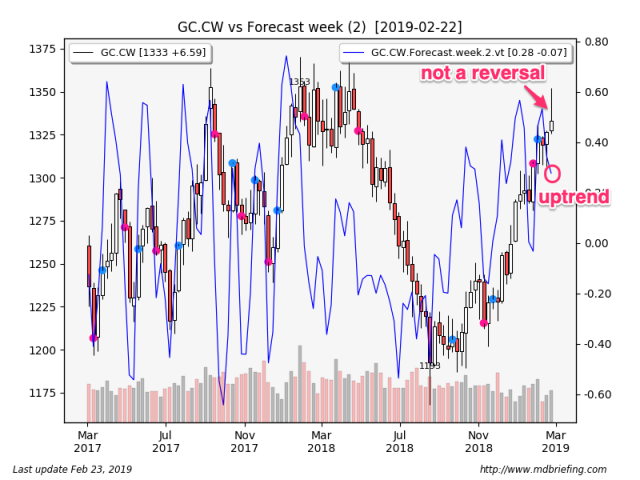 COT report is still behind.  It seems as though managed money has been buying during this gold rally, although the increase has been pretty feeble compared to – say – early 2016. The rally from 1200-1250 looks to have been short-covering, but the move from 1250-1350? It wasn’t managed money longs. Their contribution has been minor. Something else, outside COMEX, is moving price higher. And managed money longs are very underinvested given the current price. At 134k longs, they are way below the 275k-300k longs they had last time gold was around 1350.  On a breakout above 1380, managed money will have to scramble to jump on board the train.  Things could get out of control. 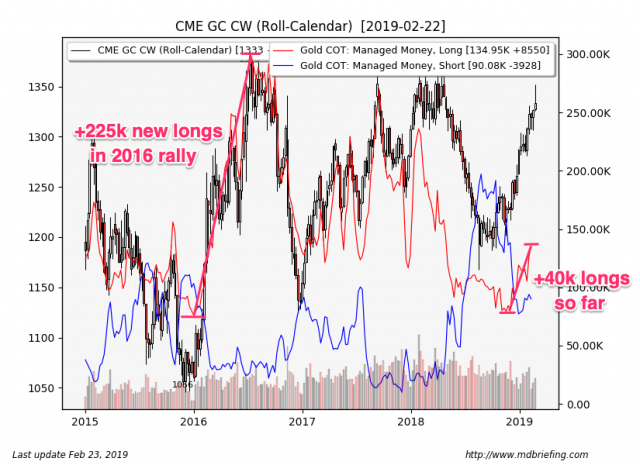 Silver rose +0.13 [+0.83%] this week. While silver did better than gold by the numbers, the two charts look quite different. Silver did not manage to make new highs, and the sell-off on Thursday was more severe. While silver did manage to stay above all 3 moving averages, silver ended the week in a downtrend in both the daily and weekly timeframes.

The gold/silver ratio rose +0.78 to 83.76. That’s bearish. Silver is back to underperforming gold.

Silver’s COT report looks fairly unpleasant; commercials are heavily short, and managed money net is consistent with what could be a top for silver. It appears to me that the reason for silver’s underperformance is the large increase in commercial shorts that been added during the last month or so – perhaps 50k contracts, give or take. That’s 103 days of global silver production in new paper over the past 5 weeks. 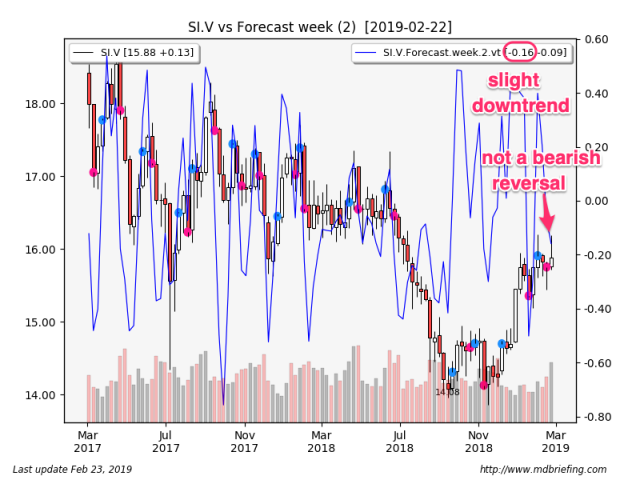 Miners were strong performers this week; XAU broke out to new highs, retraced slightly, but ended the week with most of its gains intact. Friday’s (daily candle) shooting star was not a bearish reversal, and the weekly long white candle was a bullish continuation. At the end of the week, XAU remained in an uptrend in all 3 timeframes. The miners ended the week looking pretty good. 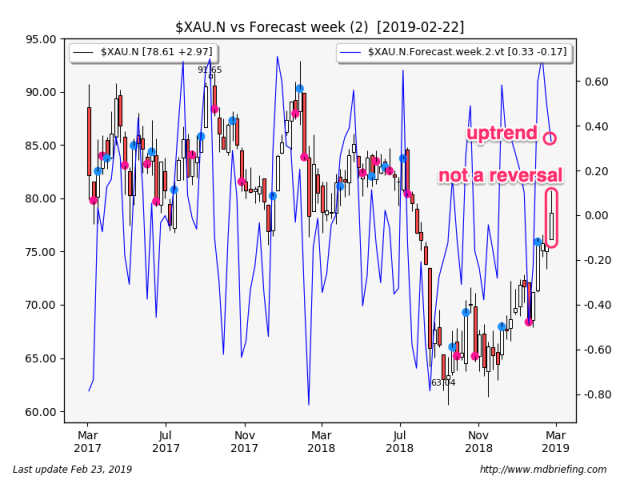 The buck fell -0.39 [-0.40%] to 95.98. The buck is meandering lower; most of the losses happened on Tuesday, which caused daily forecaster to issue a sell signal. The buck ended the week in a downtrend in both the daily and monthly timeframes. That said, the buck really looks to be in a state of indecision; the trends are not that strong right now, and the buck could end up going either way.

The struggle continues; BRExit chaos is the bullish force, while the US-China trade negotiations are bearish for the buck. 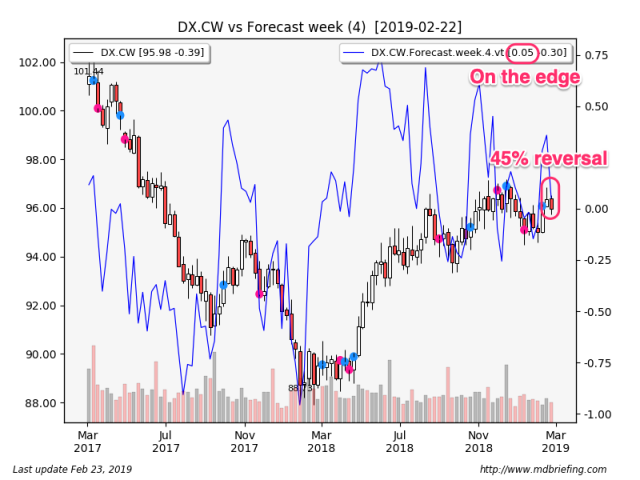 SPX rallied +17.07 [+0.61%] to 2792.67. Most of the gains came on Friday, when SPX made a new high, and closed right at the highs of the day. The weekly white marubozu candle was mildly bearish (33% reversal), but weekly forecaster remains in a strong uptrend. SPX is in an uptrend in all 3 timeframes.

Utilities did best, along with materials, while energy and sickcare did worst. You never like to see utilities at the top of the heap, and financials near the bottom.  It looks a bit bearish.

The US was #5 in terms of regional equity moves. Emerging Asia looked very strong.

TLT was all over the map this week, but ended down -0.34%. The drop took TLT below its 9 MA. TY looks substantially better, rising +0.10% – it is more or less chopping sideways, but Friday it looked reasonably strong. TY remains in an uptrend in all 3 timeframes. Given the strong rally in equities over the past few months, bonds continue to do surprisingly well – TY remains quite near its highs. The 10-year yield fell -1.1 bp to 2.66%. 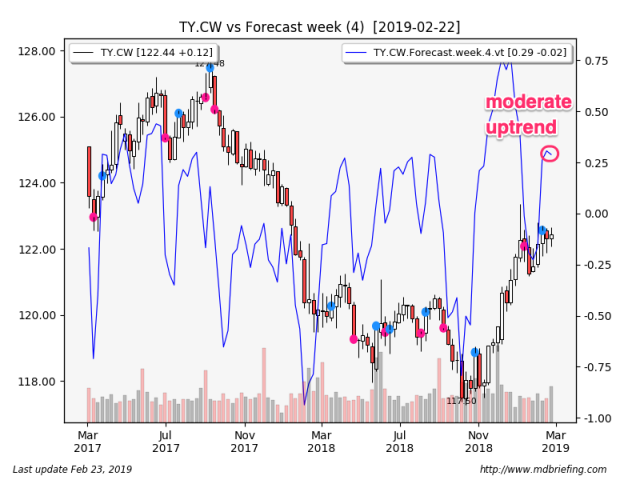 JNK rose +0.17% this week, moving slowly higher, remaining in an uptrend. HYB looks a touch weaker, but it too ended the week in an uptrend.

Crude rose +0.94 [+1.66%] to 57.46, making a new high. That said, momentum does appear to have slowed to some degree; the daily forecaster issued a sell signal on Thursday. The EIA report was mildly bearish (crude: +3.7m, gasoline: -1.5m, distillates: -1.5m), and that report did nothing to help prices move higher. The weekly candle was a short white, which was a bullish continuation, and weekly forecaster moved more strongly into an uptrend. Crude ended the week in an uptrend in the weekly and monthly timeframes.  While crude may show signs of putting in a top on the daily chart, the weekly still looks quite strong. 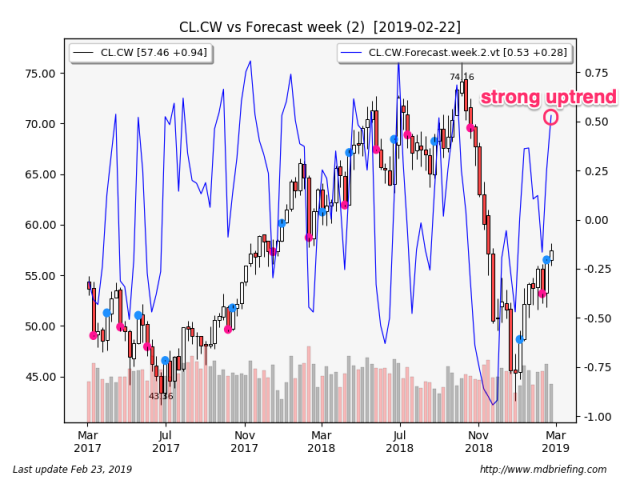 * The GLD ETF tonnage on hand was unchanged, with 793 tons remaining in inventory.

* Premium for physical (via Bullion Vault: https://www.bullionvault.com/gold_market.do#!/orderboard) vs spot gold (loco New York, via Kitco: https://www.kitco.com/charts/livegoldnewyork.html) shows no premium for gold, and an 2c premium for silver.

It looks to me as though we are two to three weeks away from a trade deal with China. The level of specificity in the latest reporting is quite encouraging, as are the comments from the Chinese leadership on the progress of the talks, as is Trump’s explicit willingness to extend the 25% tariff deadline. Even the US press has backed off Trump on the trade negotiations – they are no longer calling him a fool for having gone down this path, and there are no more articles suggesting that Trump will cave and that “Beijing will get everything it wants.” Perhaps that’s the strongest sign that a deal is close. Lastly, there is the burst of money flooding into the other metals; platinum saw an extremely strong rally this week, copper broke out of its recent trading range to the upside, and palladium made another new all time high.

Interestingly, equities do not seem to be on fire with the news; unlike the other metals, they continue to move higher, but at a relatively sedate pace. I could easily see the agreement being a sell-the-news event for equities. That’s what the setup appears to me anyways.  Equities really do seem to be running low on fuel.  Sell the news.  That’s my thought.

Gold doesn’t appear particularly worried about a settlement. Nor, it seems is gold concerned over any sort of Fed hawkishness. The impact of the FOMC minutes release on Wednesday seemed relatively contained – although we will know more next week. Miners continue to look quite strong. Longer term, they have seriously lagged the increase in gold, and if (when?) gold does execute a breakout above 1380, I firmly believe that the miners will probably go nuts. Then again, I’m long, so take what I say with a grain of salt.

It is possible that some of gold’s bid comes from the chaos surrounding BRExit. If there is a resolution of some sort – if Parliament signs off on May’s Unconditional Surrender document, we could see the Euro scream higher, and gold (in Euros at least) plunge in relief. The buck will drop, but perhaps gold in USD would remain relatively level.  It’s hard to know for sure.

Big bar gold premiums on gold remain low, and ETF discounts declined. There is no shortage of gold or silver at these prices.

For right now, at least, just about everything is moving higher.  Especially palladium.  Boy, what a boat I missed.  The palladium boat, I mean.  Is there a COMEX Default in palladium in the offing?  Certainly, there seems to be a very small amount of physical palladium at COMEX backing a very large number of short contracts in existence.  Craig Hemke tells us that the ratio of contracts-to-physical are as follows:  gold 4:1, silver 6:1, and palladium?  67:1.  That’s lots of paper, and very little metal, for palladium.  Here’s the article at Sprott by Hemke: https://www.sprottmoney.com/Blog/the-magic-palladium-bullet-craig-hemke-20-022019.html

A COMEX default.  Wouldn’t that be fun?  After all these years.  And in palladium, of all things.