The fun events this week:

The weekly metals sector map went from hints of reversal to a full-on bullish move this week; miners were leading metal (although the seniors led the juniors), and silver led gold. We have not seen this configuration for quite a while; that’s because it is bullish! Platinum and copper are the only two metals that were in the red this week. Most items are above both the 9 and 50 MA lines.

The December rate-increase chances fell to 71%.  Although friend Wolf Richter thinks the Fed will continue to raise, I just don’t think so.  We’re “just below neutral” – Powell wasn’t kidding about that, I don’t think.  Certainly gold seems to believe this anyway.  Gold doesn’t like rising short-term rates.

COT report was delayed due to the Bush-1 funeral holiday. 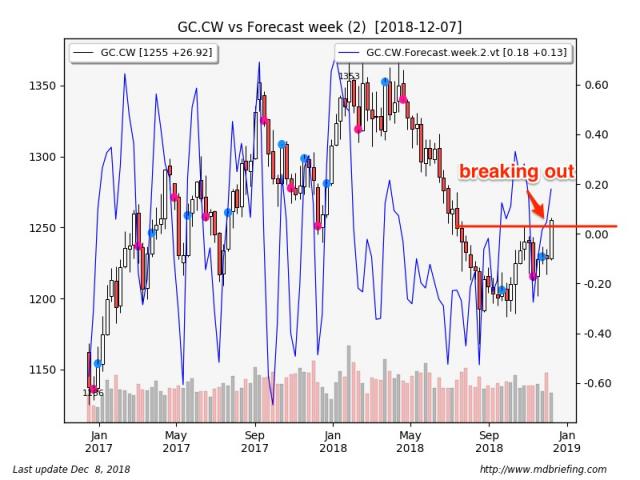 Silver rose +0.45 [+3.10%] on the week, a solid move for silver that took it back above its 50 MA. Unlike gold, silver has not been able to break out to new highs; it remains in its recent trading range, although it is moving towards the upper end of that range.  Still, silver did manage to issue a buy signal in both the daily and weekly timeframes this week, which is a positive sign. Silver remains in a downtrend on the monthly; a close above 15 would move it from “side-tracking” into “breakout” territory. 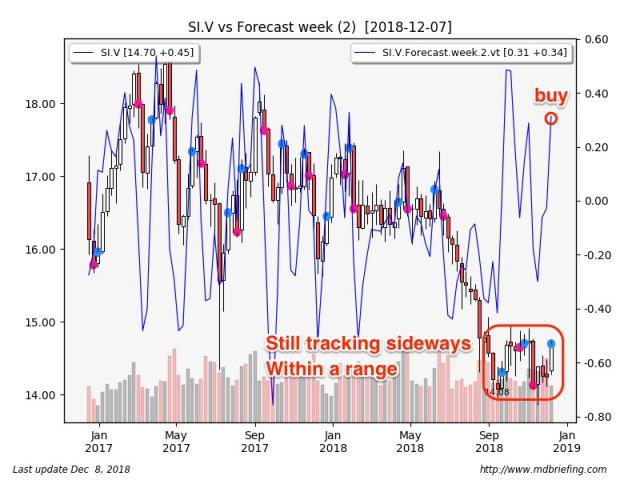 Miners moved sharply higher this week, with XAU up +5.40%. The move took XAU through both the 9 and 50 MA lines, as well as breaking above a previous high set 3 weeks ago. The medium-term double bottom pattern is still in play; XAU needs a break above the high set 7 weeks ago for this very strong pattern to be confirmed. XAU’s move caused both the daily and weekly forecasters to issue buy signals this week; this puts XAU in an uptrend in all 3 timeframes. The miners look strong; they rallied sharply while SPX fell. 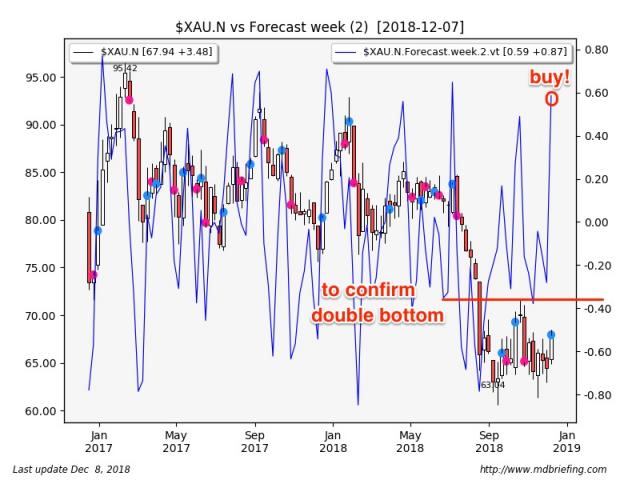 The buck fell -0.76 [-0.79%] to 96.01. The move this week caused all 3 forecasters to issue sell signals.  Although the weekly downturn is mild at this point, the three sell signals in unison is a bit disturbing.  This may be a top for the buck. 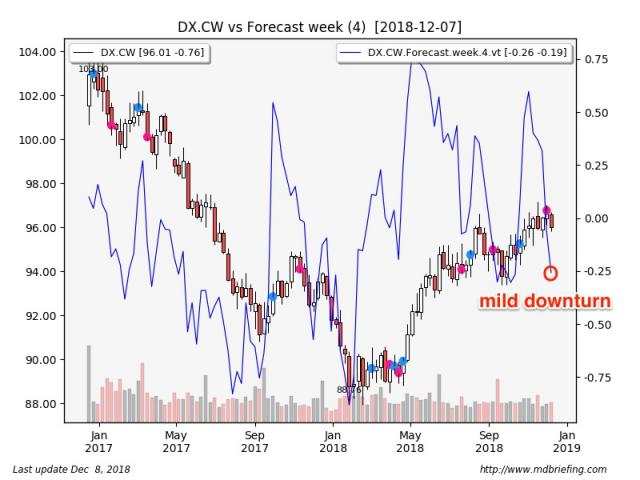 SPX plunged -127.08 [-4.60%] to 2633.08. After rallying on Monday, SPX was hit hard on both Tuesday and Friday, ending the week near the lows. The moves dragged SPX into a downtrend in all 3 timeframes. There is no bullish reversal for SPX in sight; not the weekly candle, not Friday’s daily candle.  My technical indicators all look pretty grim.

The sector map had financials leading down – never a good sign. That’s probably about the inverting yield curve. Banks don’t do well when their funding costs rise above the prices they charge for money. Utilities did best, along with REITs. This is a bearish sector map.

Globally, the US was the worst-performing equity market this week; that said, the US is still almost flat over the last 52 weeks, while most of the rest of the world is down at least 10%.

TLT shot up +2.67%, a very strong move that took TLT back up to its 200 MA. TY rose +0.85%, also a strong move, that caused TY to break above a previous high set back in August. The 10-year yield plunged -16.3 bp to 2.85%. Bonds may have been trash back in October, but they are receiving big inflows right now. TY is in an uptrend in all 3 timeframes. Over the past 19 trading days, TY has only had 3 down days – and those were very minor moves. Given the plunge in the buck, this suggests that the bond rally is most likely all domestic money moving from equities into bonds. 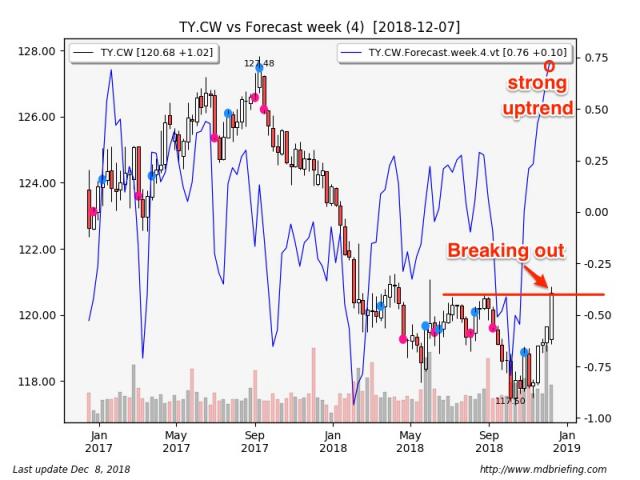 JNK fell -0.08%, making a new low on Thursday by a penny. JNK ended the week below all 3 moving averages, but Friday’s minor drop didn’t match up with the equity market smash. That’s fairly odd; my sense: if money isn’t fleeing junky debt, we probably aren’t in any sort of more general economics-driven panic mode, in spite of the several unpleasant days in the equity market.

BAA corporates agree – BAA rates actually fell this week, at least as of Thursday, which is the last day I have data for the BAA series. They just fell less than the AAA rates. The scary times are when BAA rates rise and AAA rates fall at the same time, and we are not seeing that right now.  The current pattern says we are in “pre-recession” times, rather than in “Lehman is exploding” times.  In other words, mid-2007, not September 2008.  [Bonds rally = yields fall]. 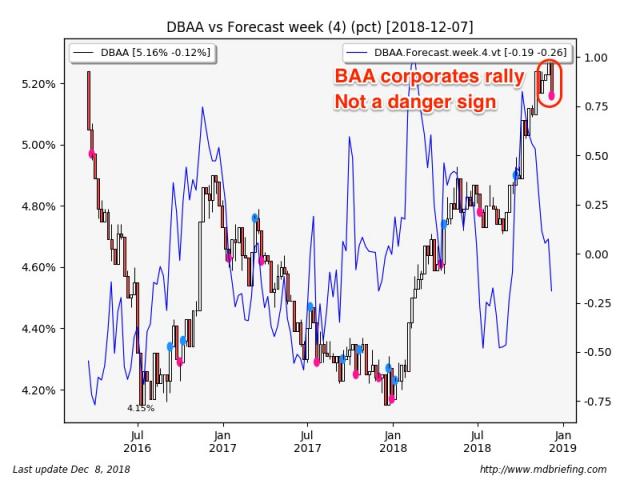 Crude rose +1.53 [+3.01%] to 52.38, following through off last week’s low-percentage reversal bar. The potential settlement of the US-China trade issues, a bullish EIA report (crude: -7.3m, gasoline: 1.7m, distillates: 3.8m) and an OPEC decision to cut production was just enough to keep oil from moving lower. In fact, all the gains this week came on Monday. Forecaster issued a daily buy on Friday, but remains in a downtrend on both the weekly and monthly timeframes. Still there is a sign of hope: the not-yet-completed monthly bullish harami pattern is actually pretty bullish: 63% reversal. This assumes we close here at end of month, of course.  Crude’s reversal – assuming one happens – will probably end up being a “process”. 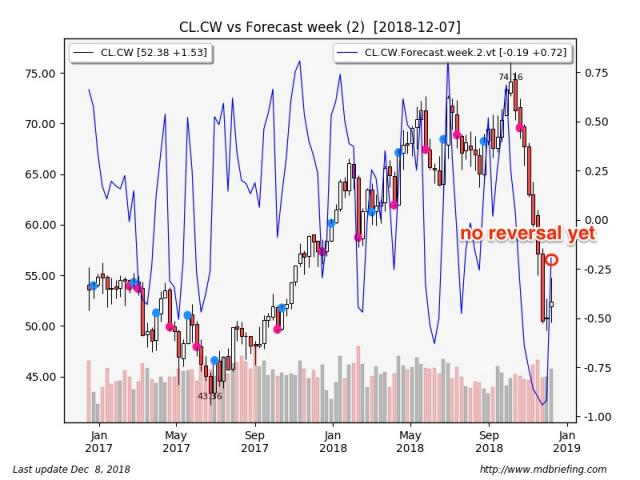 * Bullion Vault gold (https://www.bullionvault.com/gold_market.do#!/orderboard) shows an $11 discount for gold and a 12c discount for silver.

This week was a terrible week for the equity market; the plunge utterly wiped out the rally from the US-China trade settlement, and some more besides. What’s more, treasury bonds have staged an impressive rally, the shorter-duration section of the yield curve inverted, and gold, silver, and the miners did well also. Money moved from risk to safe havens.  Equity market’s loss was gold’s gain – the two are very often inversely correlated.

Big bar gold premiums on gold remain low, silver’s premium has remained the same, while ETF discounts decreased substantially. There is no shortage of gold at these prices, but there does seem to be a shortage of silver, for certain products.  The metals ETFs are providing a nice return – shrinking discounts alongside rallying metals prices.

The COT report was delayed for a day due to the funeral of Saint Bush The Elder.

So where are we in the recession watch?

Given it was Payrolls week, I’m going to include a payrolls-related macroeconomic chart that has been pretty reliable in detecting the start of a recession. The series is LNS12032195, “Employment level: Part-Time for Economic Reasons, Slack Work, or Business Conditions”. I ran it through a 6 point moving average to smooth out the bumps. In every case, a recession only occurred once this indicator started turning higher. So far, that hasn’t happened.  No near-term recession.  Probably. 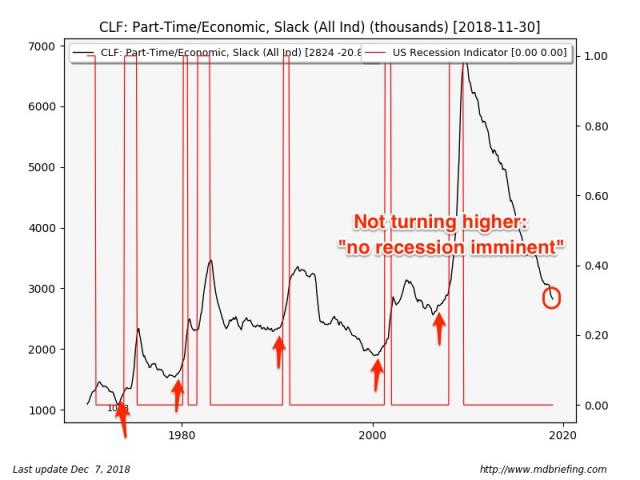 Reading some more tea leaves, I’m noticing that the selling is – while not exactly US-centric, it does seem to be primarily focused on the US. Money is fleeing equities to safe haven assets, but only among US players. The decline in the buck is relatively mild. And the US macroeconomic data hasn’t really deteriorated, at least not that I can see anyway. Sure the yield curve is inverting, but the act of inversion just reflects capital flows, rather than being an actual fundamental macroeconomic event, such as falling payrolls, or declining loan volumes.

You can track the various series yourself at FRED: https://fred.stlouisfed.org/series/SeriesName

There are two negative series: auto sales, and housing. Auto sales are down somewhat, but not by much – from 17.58m units down to 17.16m units.

The housing market is the problem child. All sorts of indicators are telling us we are heading lower. PERMITS, supply, median new home sale prices – its all bad news.

A recession is almost certainly coming, but my guess: it is at least 3 months away, maybe more. And between now and then, a trade settlement could get those animal spirits moving again, so could a good Christmas shopping season (please help by buying more stuff you don’t need on credit), so could the end of tax-loss-selling season, so could the January effect. The Fed (which meets in 10 days) could also decide to stop raising rates entirely, announcing this at this press conference.  I suppose I’d call that “risks to the recession scenario.”  Regarding equity prices – things do not always move in a straight line either.

One takeaway from this week’s action: it seems as though gold will do well in the coming environment, based on how it has been doing over the past month or two. That’s what the evidence suggests.  After a long, long while, gold might start attracting money once more.

Next week: BRExit vote in the UK Parliament!