The metals sector map has silver leading gold, miners leading metal, and juniors leading seniors. This is the classic bullish PM pattern. All items (except palladium) are back above all 3 moving averages. Why did this sudden breakout occur on a typically low-volume holiday trading week? Boy, I have no idea. But it sure did.  Check out the 52-week change for gold: +18%!!

On the week, gold rose +34.19 [+2.30%] to 1518.50 on moderately light volume. The confirmed bullish nr7 candle was a reasonably strong bullish reversal (40%), and forecaster climbed, moving higher into its uptrend. Gold ended the week in an uptrend in the daily and weekly timeframes, while the monthly is now in a state of no-trend. Gold/Euros looks quite similar.

COMEX GC open interest rose +12K contracts on Friday, and rose +41K contracts this week. That was 18 days of global annual production in new paper added to the market. Current open interest for GC: 95% of global annual production, up +5.06% this week. This week marked yet another new all time high for gold OI – this with gold well down from its recent highs – and the increase was large. What would gold have done without all this new paper? 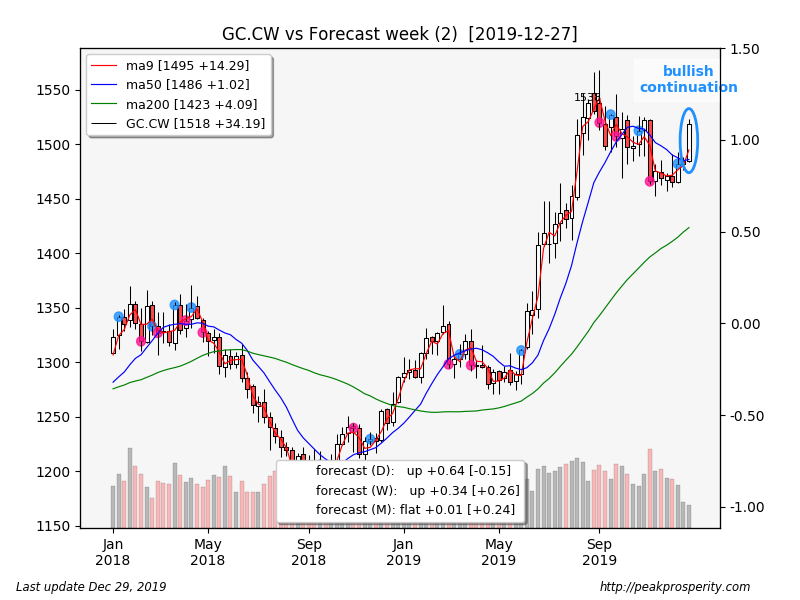 Silver shot up +0.58 [+3.36%] to 17.86 on moderate volume. The opening white marubozu candle was a reasonably strong bearish reversal (41%), but forecaster climbed, moving higher into its uptrend. Like gold, silver ended the week in an uptrend in both daily and weekly timeframes, with the monthly in a state of no-trend. 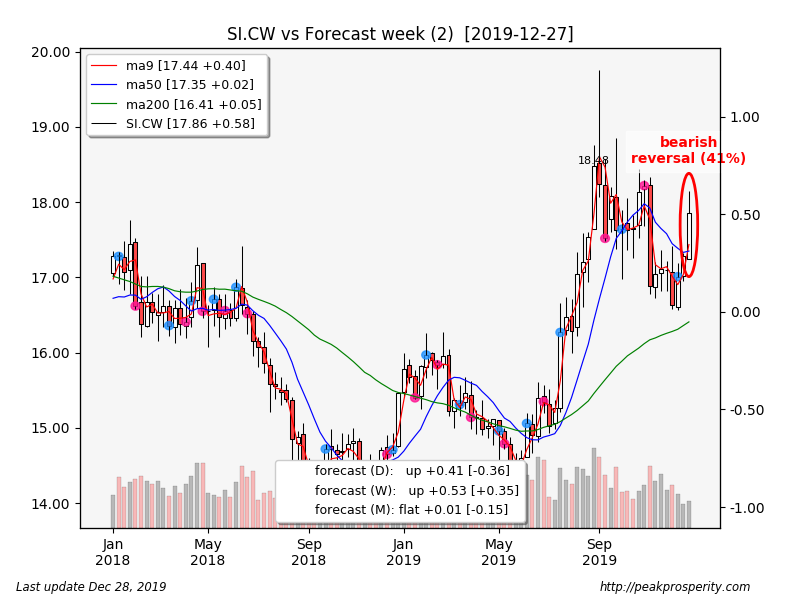 The miners had an extremely good week. GDX screamed higher +6.41% on moderately light volume, and GDXJ did even better, up +8.01% on moderate volume. XAU rallied strongly [+7.76%], the long white candle was a possible bearish reversal (31%),and forecaster dropped, but remains in an uptrend. XAU ended the week in a strong uptrend in all 3 timeframes. The miners broke above the recent prior high to levels not seen since 2016. That’s a bullish sign. 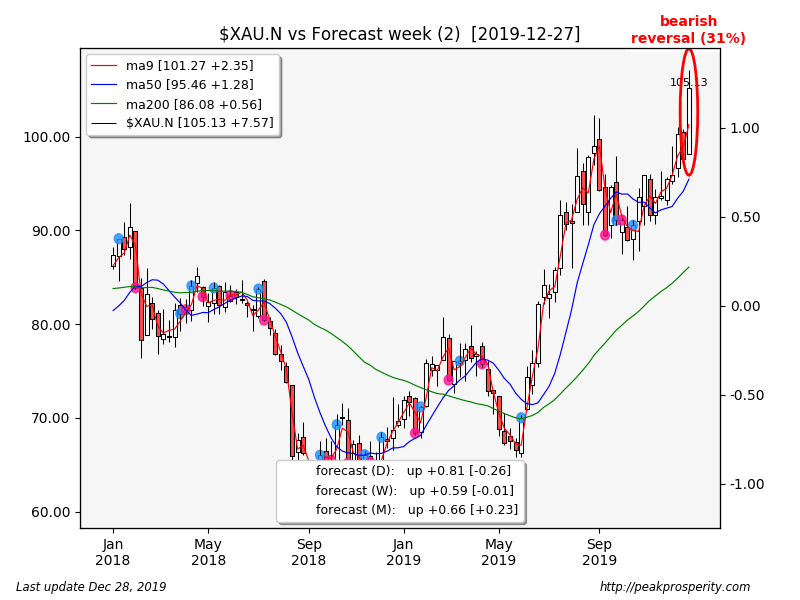 The buck plunged -0.75 [-0.77%] to 96.49 on moderate volume. The closing black marubozu candle was bearish, and forecaster dropped, moving deeper into its downtrend. The buck ended the week in a downtrend in all 3 timeframes. Most of the damage happened on Friday; while the buck has yet to make a new low for the current downtrend, it is not far from it.  Is this caused by all that money printing? Or is this a risk-on sign? Its hard to say. 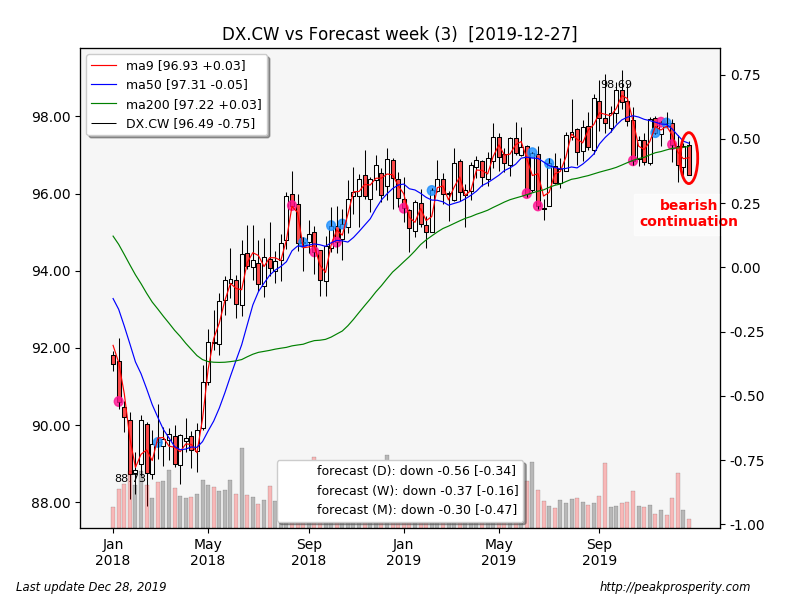 SPX moved higher, up +18.80 [+0.58%] to 3240.02 on moderately light volume. This week was yet another new all time high for SPX. The short white candle was a bullish continuation, and forecaster climbed, moving higher into its uptrend. SPX remains in an uptrend in all 3 timeframes, although the daily is starting to look a trifle weak. 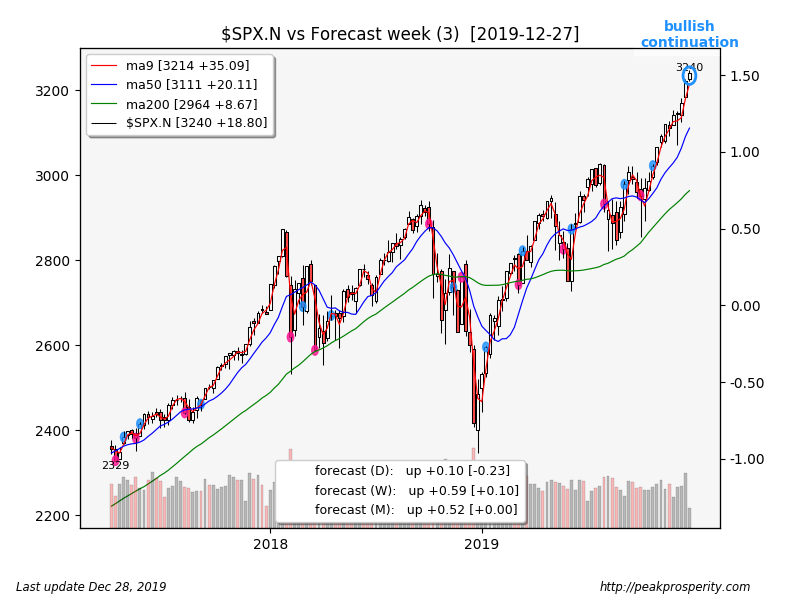 TY climbed [+0.30%], the short white candle was unrated, and forecaster climbed, but remains in a downtrend. TY ended the week in a strong downtrend in both the weekly and monthly timeframes. 10-Year Yield fell -4.0 bp to +1.90%. Bonds continue to look feeble, especially compared to gold. 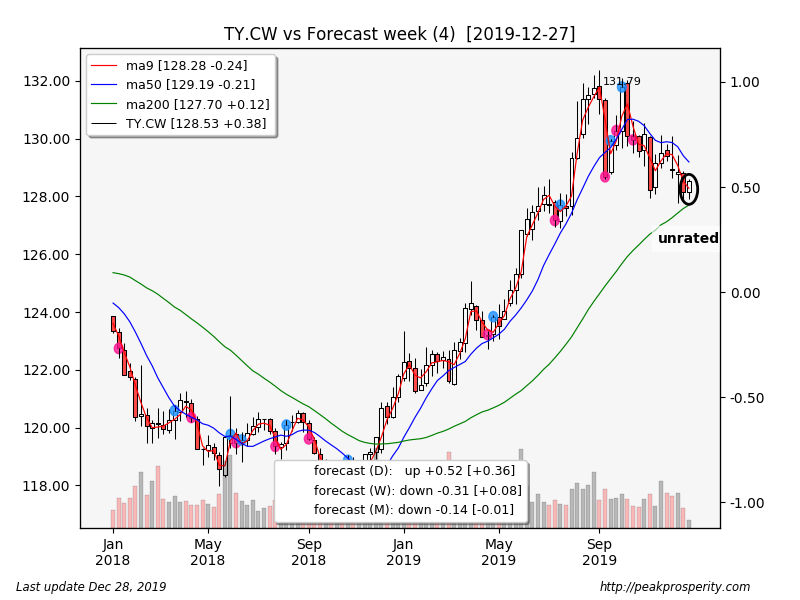 JNK moved up [+0.25%], the short white/NR7 candle was unrated, and forecaster dropped, but remains in an uptrend. JNK ended the week in an uptrend in both daily and weekly timeframes. I added a JNK weekly trend forecaster this week – see below. BAA.AAA differential was unchanged this week at +87 bp. There are still no real worries about credit quality right now. 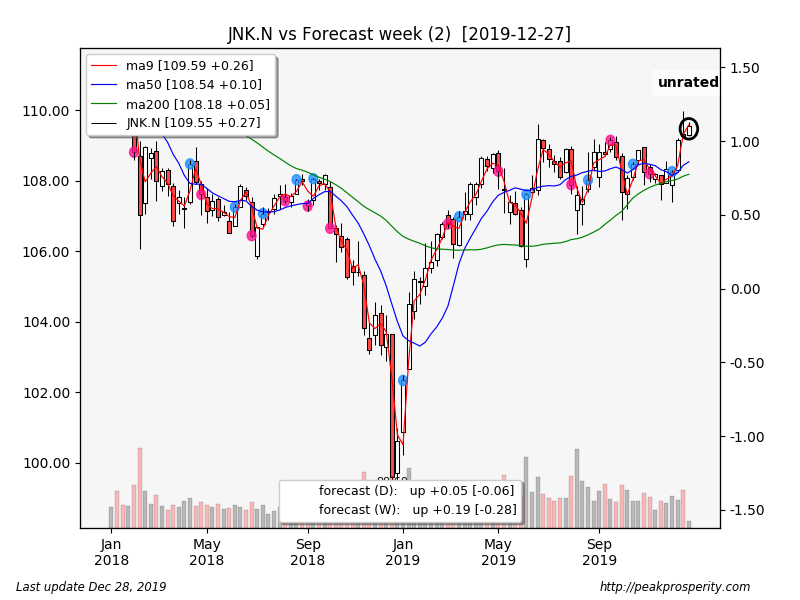 Crude moved up +1.28 [+2.12%] to 61.52 on moderately light volume. The long white candle was a bullish continuation and forecaster moved lower, but remains in an uptrend. Crude ended the week in an uptrend in all 3 timeframes.  This was another 6-month closing high for crude, which continues to move slowly higher. 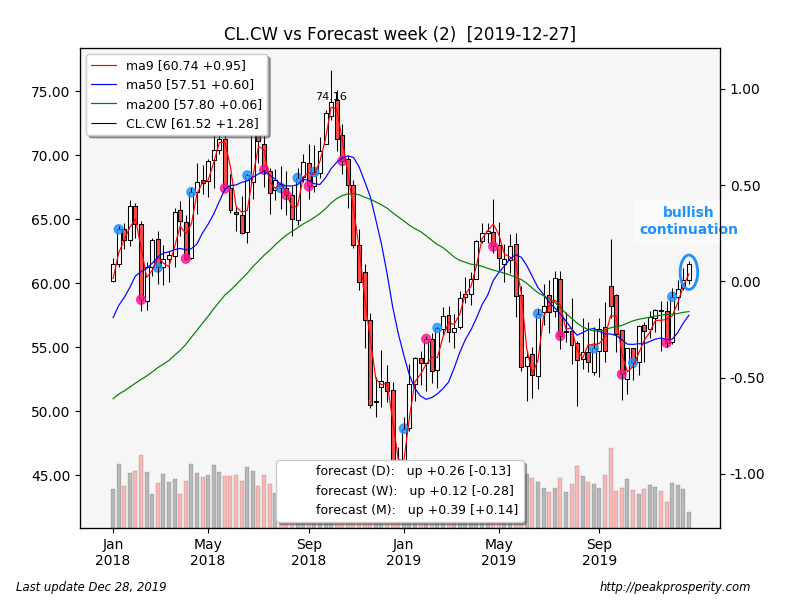 The GLD ETF tonnage on hand climbed +7.32 tons, with 893 tons remaining in inventory.

Looks like money is moving into the gold ETFs faster than into COMEX. This week we saw gold and silver both rally, and the ETF discounts decline. That’s nice if you are already an owner.

The commodity rally is starting to become a thing. All groups moved higher this week, led by energy, which hit a 7-month closing high this week. The commodity group (CRB) made an 8-month high, and could be setting up for a breakout which would confirm a large double bottom pattern – quite bullish if it makes it that far. Is this about money printing? Certainly, the velocity of the growth in the Fed’s balance sheet is remarkable, and harks back to the money-printing days of 2013-2014. 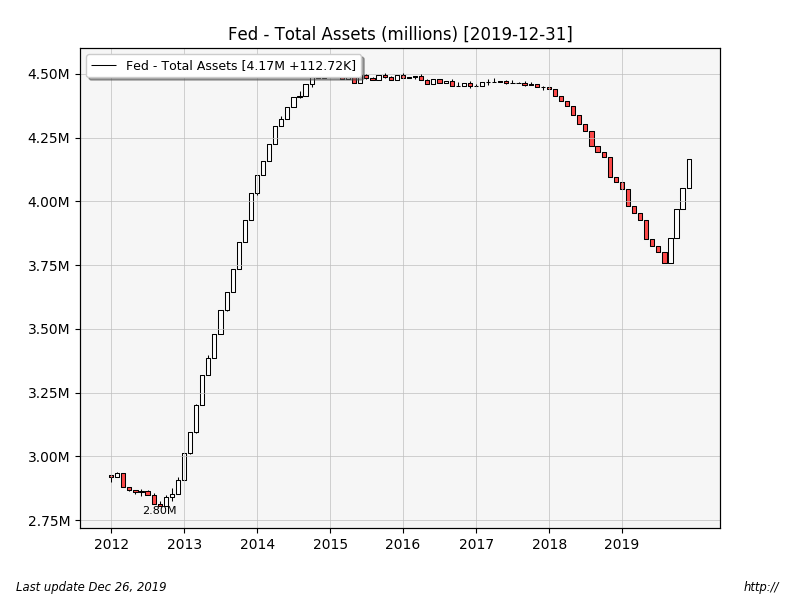 Is that what is driving gold during this holiday-shortened trading week? It is hard to know. The massive growth in gold OI continues to restrain gold’s upward track. Based on the difference in silver vs gold OI, I think it continues to be official intervention.

Interestingly, with all the money printing going on, very little of it appears to be going into the longer duration bonds. While bonds have rallied slightly, the bounce was anemic, especially compared to what PM did during the same time period. Not long ago, the 10-year and gold moved in synchrony, but not any longer. This tells us that something under the covers – some sort of sentiment – has changed.

While SPX makes new highs, JNK’s move is starting to look anemic. Money flows into crappy debt have slowed way down. Copper too is looking a bit weak – weekly forecaster is hinting at a possible bearish reversal, although the candle was positive.

This week’s economic reports suggested hints of a recession next month: durable goods orders were negative, which is not good news. We might have a bounce in the housing market, though it probably needs more than one month to have confidence in this outlook.

Big bar premiums on gold and silver were little changed, while ETF discounts shrank. Money is flowing into the PM ETFs faster than it is into COMEX. This suggests goldbugs are buying the rally.