Given the strong move in the buck on Friday, gold actually did fairly well to avoid a larger loss.

The metals sector map shows silver leading gold higher, but the miners lagged badly, with the junior miners doing worse than the seniors. Things are a bit confused right now – why did silver do so well, while the junior miners sold off? I don’t know. Looking at the moving averages, both gold and silver remain above the 9 MA, but neither have managed to close back above the 50.

The futures markets are projecting a 4% chance of a rate increase by the Fed’s next meeting in January, 2020.

Gold commercial net fell -16K contracts, which was +15K new shorts, and -942 fewer longs. Gold managed money net rose +18K contracts, which was -2.4K fewer shorts, and +16K new longs. Commercial shorts are just slightly below their all time high (set a few weeks back), while managed money shorts are near their lows. Curiously, commercial longs are also relatively close to their highs as well. The whole pattern right now is nonstandard – to say the least. I do not think the normal COT analysis applies right now to gold. 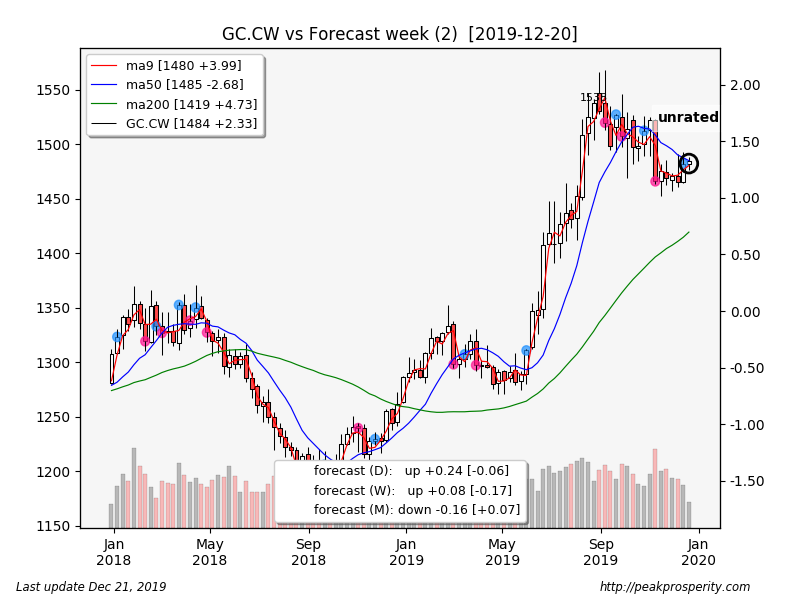 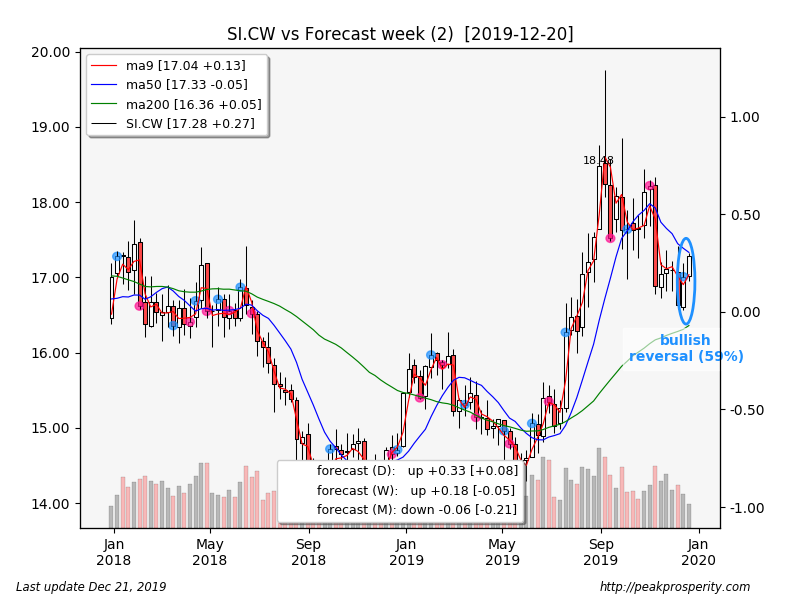 The miners moved lower this week, mostly due to the decline on Friday. GDX dropped -2.13% on moderately light volume, and GDXJ plunged -2.59% on moderately light volume. XAU fell [-2.71%], the dark cloud cover candle was a possible bearish reversal (34%), but forecaster climbed, moving higher into its uptrend. Although weekly forecaster still looks reasonably good, the daily dropped into a downtrend on Friday’s decline, and also closed below the 9 MA as well. That all looks fairly bearish. Even so, miners remain in an uptrend in both weekly and monthly timeframes. 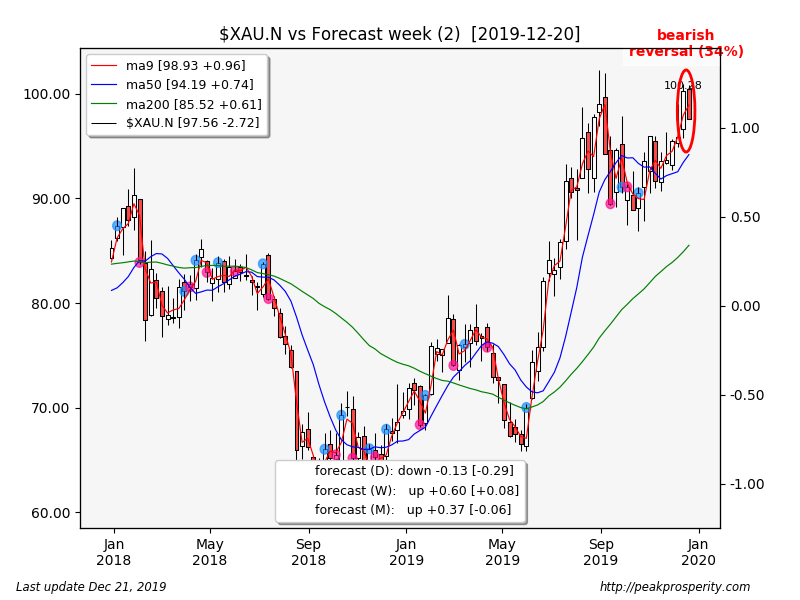 The buck climbed +0.50 [+0.52%] to 97.24 on moderately light volume. The short white candle was unrated, and forecaster climbed, but remains in a downtrend. The buck remains in a downtrend in both weekly and monthly timeframes, but that monthly may be ready to reverse. This week’s rally in the buck took it back above the 200 MA, which is a positive sign.

Some of the bloom came off the Brexit rose this week; there is now chatter about a “cliff edge Brexit” all because Johnson put a 12 month clock on negotiating the deal with the EU. (Ticking clocks seem to work well to motivate the EU; likewise, having no clock has been demonstrated to work poorly. Predictably, the EU complained about this clock, and the concern was promptly echoed in “Remainer” news organizations.) 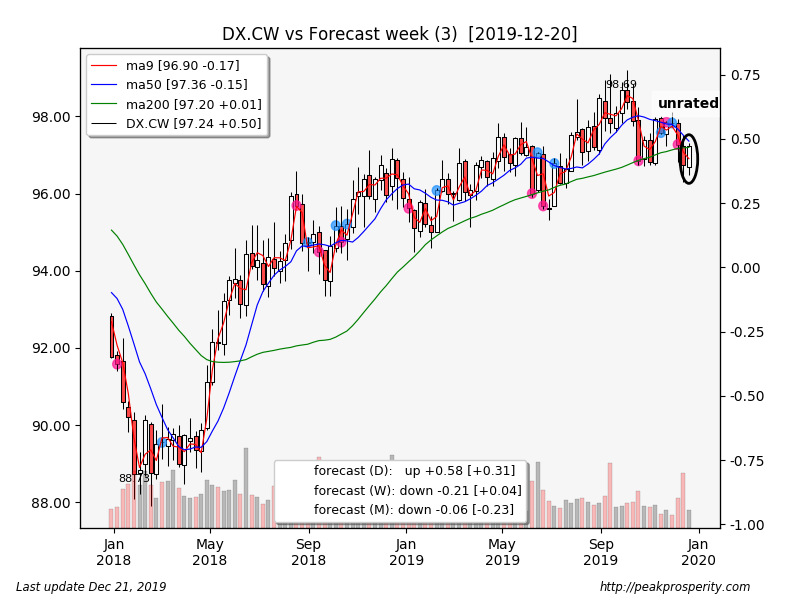 SPX rallied +52.42 [+1.65%] to 3221.22 on extremely heavy volume. The opening white marubozu was a bullish continuation, and forecaster climbed, moving higher into its uptrend. SPX remains in a strong uptrend in all 3 timeframes. There does not appear to be any sort of “sell the news” effect from the US-China trade deal. Perhaps that is because of the ongoing flood of new money from the Fed. 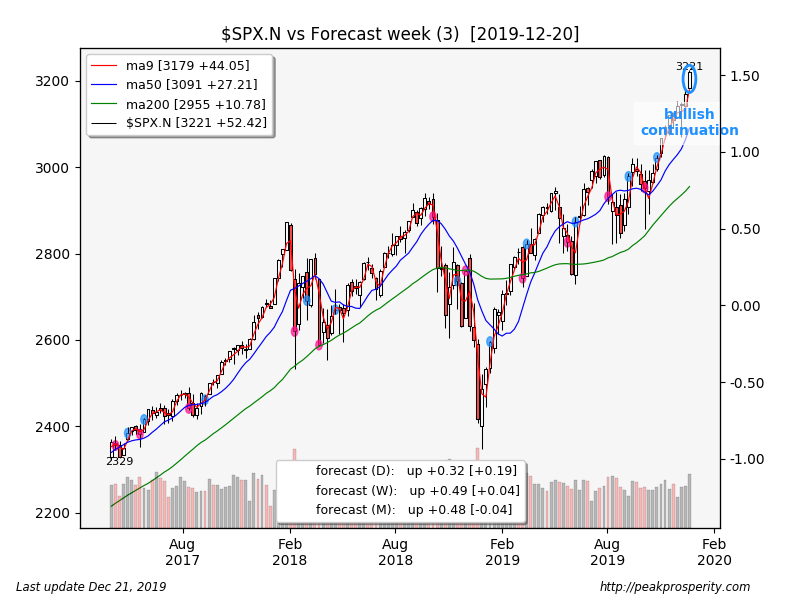 The US equity market was ranked #2 this week; Emerging Asia did best.

TLT plunged [-1.56%], the opening black marubozu candle was a bearish continuation, and forecaster remains in a downtrend. 30-Year Yield rose +8 bp to +2.34%

TY dropped [-0.54%], the short black candle was unrated, and forecaster dropped, moving deeper into its downtrend. This was a new weekly closing low for TY. TY remains in a downtrend in all 3 timeframes. 10-Year Yield rose +10.0 bp to +1.92%.

Bonds sure look like they are ready to break down. This does fit with the “inflation” thesis. 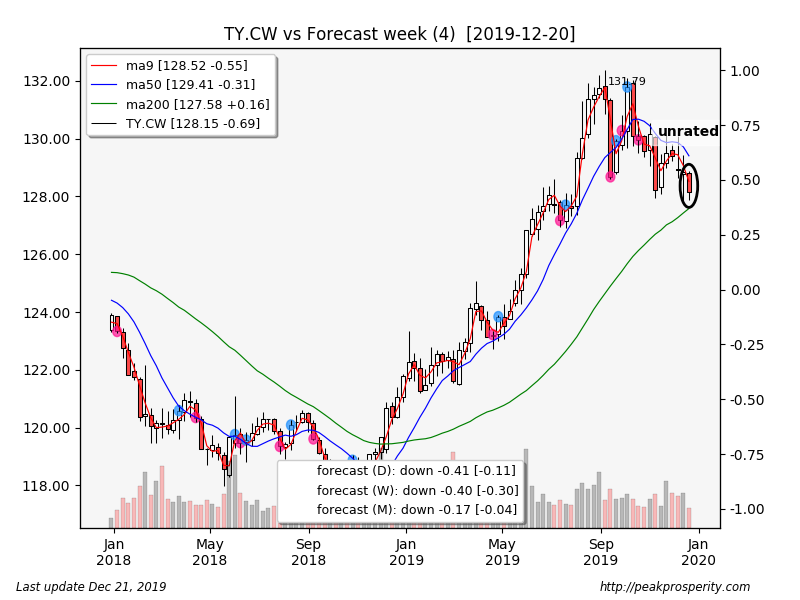 JNK moved higher [+0.10%], but the gravestone doji candle was a likely bearish reversal (83%), and forecaster ended the week in a downtrend. This week saw a large failed rally for JNK – all of it happened on Friday. Hmm. What’s that about? BAA.AAA differential was unchanged this week at +87 bp. There are still no real worries about credit quality right now. 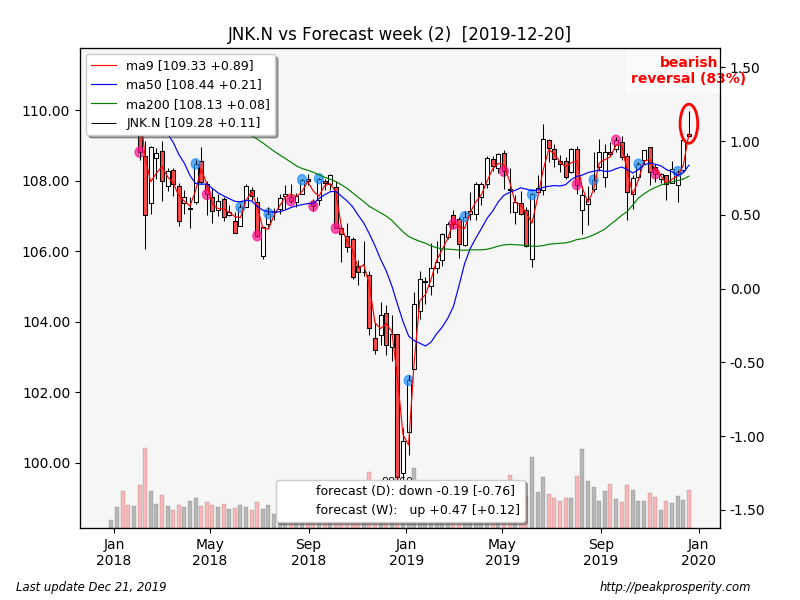 Crude moved up +0.68 [+1.14%] to 60.24 on moderately heavy volume. The short white/spinning top candle was a bullish continuation, and forecaster climbed, moving higher into its uptrend. Even so, Friday saw a fairly brisk sell-off in crude; the daily swing high was a probable bearish reversal (60%), and the daily forecaster dropped into a downtrend. Crude remains in an uptrend in the weekly and monthly timeframes.

The EIA report on Wednesday was slightly bearish: crude -1.1 m, gasoline +2.5m, distillates +1.5m. The release did not affect prices much at all. 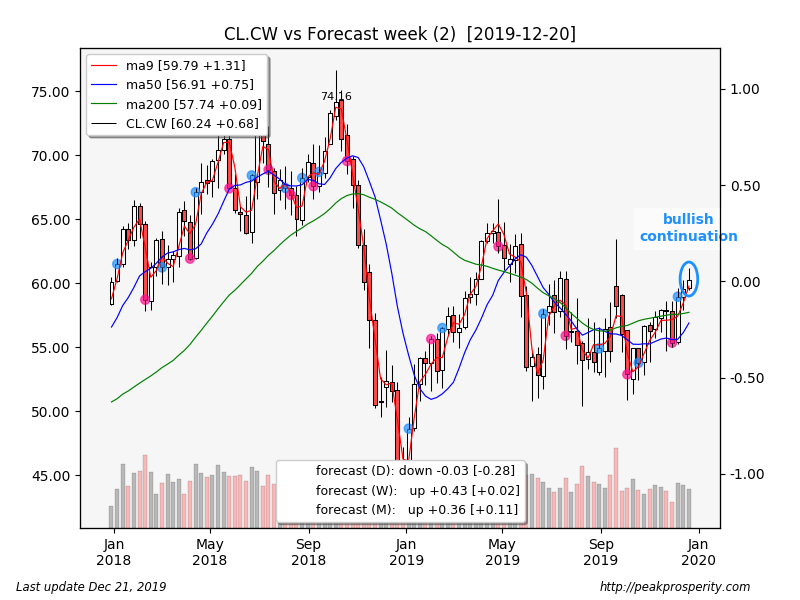 * The GLD ETF tonnage on hand dropped -0.29 tons, with 886 tons remaining in inventory.

Well, it looks like a lot of interesting (bearish) things happened on Friday. On the daily charts, JNK reversed, crude might have reversed, a number of the other metals definitely reversed, the miners reversed, the buck jumped higher, as did silver – of all things. I looked around – I’m not sure what exactly caused all the fuss. The usual suspect – the trade deal – remains on track. Perhaps it was related to options expiration (OPEX). I’m not sure. Maybe it is just noise.

SPX continues to pile on to new all time highs; was that due to the $42 billion in new cash printed by the Fed this week? Where else could all that cash go? I suppose it could have gone into excess reserves. [checking]. No, it (probably) didn’t go there. And it certainly isn’t going into the long bond, which fell this week. And the dollar rallied, which suggests inflows into the US. So – money printing = equities go higher.

Really curious that JNK reversed so strongly on Friday. I’ll be watching that one closely. It might mean something.

This week’s economic reports were all positive; industrial production recovered after the GM strike ended, personal income showed higher income and spending, the PMI flash was modestly positive, and last quarter’s GDP was mediocre but not recessionary.

Two more weeks left until the new year: 2020. Where did this decade go?

Note: If you’re reading this and are not yet a member of Peak Prosperity’s Gold & Silver Group, please consider joining it now. It’s where our active community of precious metals enthusiasts have focused discussions on the developments most likely to impact gold & silver.  Simply go here and enjoy the daily reports & discussion.