The fun events this week:

The weekly metals sector map is now hinting at a bearish reversal; while silver miners did surprisingly well, nothing else was in the green this week. Gold led silver lower, while the juniors led the seniors down. The moves were relatively mild, but they were enough to pull more than half the items below the 9 MA.

Gold fell -11.20 [-0.89%] on the week; that was all about currency, as the buck rose +0.97% during that same period. Gold daily issued a sell signal mid-week, while the weekly remains strong. However if that buck continues to rise, it will be tough for gold to move higher. Gold is in a downtrend in both the daily and monthly timeframes.  In the chart below, you can see that gold/Euros is virtually unchanged on the week.  Gold’s move: a currency effect.

The December rate-increase chances rose to 77%.

COT report shows the commercial net fell -19k; commercials added 18k shorts, and sold 782 longs. Managed money net rose +10k, which was 19k shorts covered, and 10k longs sold. Managed money shorts are now about half-depleted. Hmm. 1260 might be the high for a while, especially if that buck keeps rising. 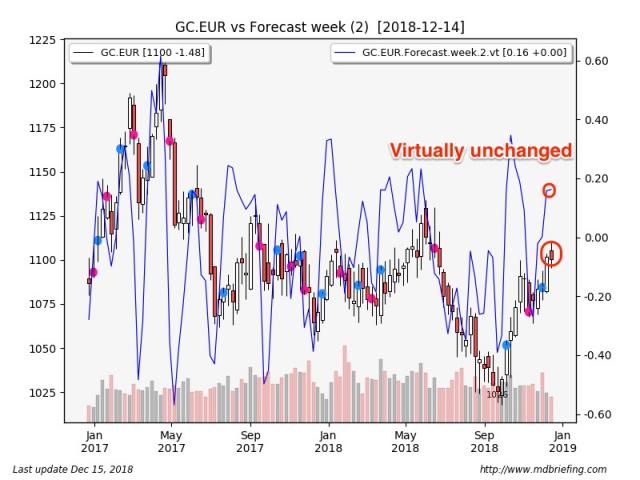 Silver fell -0.06 [-0.41%], a relatively minor move, especially given the drop in the buck. All of the damage came on Friday, when silver printed a swing high (50% reversal), and forecaster issued a sell signal. Silver also dropped below its 9 EMA at that same time. While silver remains in an uptrend on the weekly, it is by a fairly slim margin; silver is now in a downtrend in both the daily and monthly timeframes. While the rest of the week was relatively strong, Friday was not a good day for silver at all.h

COT report shows commercial net fell -12k, which was 8.6k new shorts, and 3.5k longs sold.Managed money net rose +13.2k, which was 9.7k shorts covered, and 3.3k longs added. These were fairly large moves; last week’s rally was due to managed money bailing out of their shorts. Problem is, silver managed money positions are starting to become used up – perhaps they are 2/3 gone. That’s not great news, I know. Any substantial moves higher will probably have to come from new long-buying from managed money. The good news is, managed money’s long position is at a very low level. “Nobody cares” about silver – managed money remains net short silver, even after all the recent short-covering. 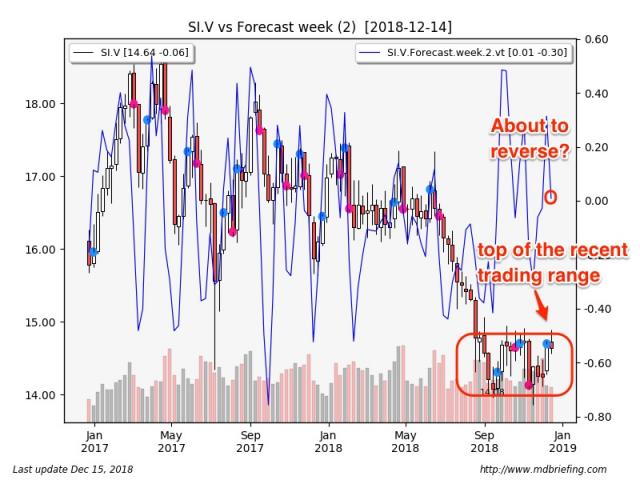 Miners were mostly flat this week; XAU fell -0.52%, printing a semi-serious swing high on Friday (45% reversal), however all 3 forecasters remain in an uptrend. XAU ended the week above both the 9 and 50 MA lines. My sense is, the miners look stronger than either gold or silver right now.  Weekly forecaster remains strong – and the doji candle is not a reversal bar. 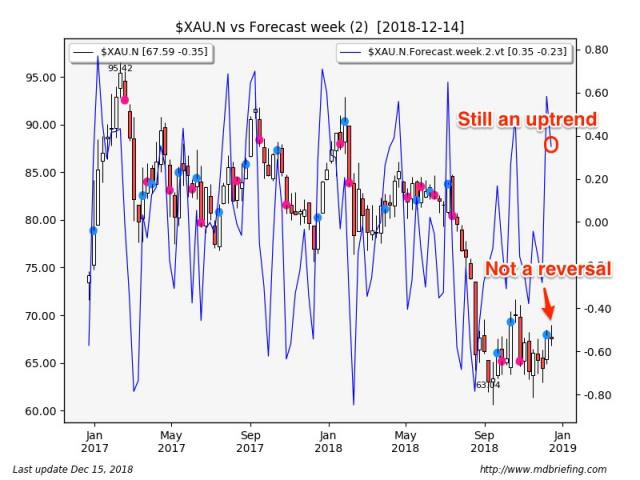 The buck rose +0.93 [+0.97%] on the week – it briefly broke out above round number 97 on Friday, but was unable to hold on through the close. [Note: I do my contract roll for DX differently than other places in an attempt to avoid large price swings due to the roll; as a result, my DX values will be different. FWIW]. The daily issued a buy signal on Monday, and by Friday the weekly had also issued a buy signal too. This puts the buck back in an uptrend in both daily and weekly timeframes. 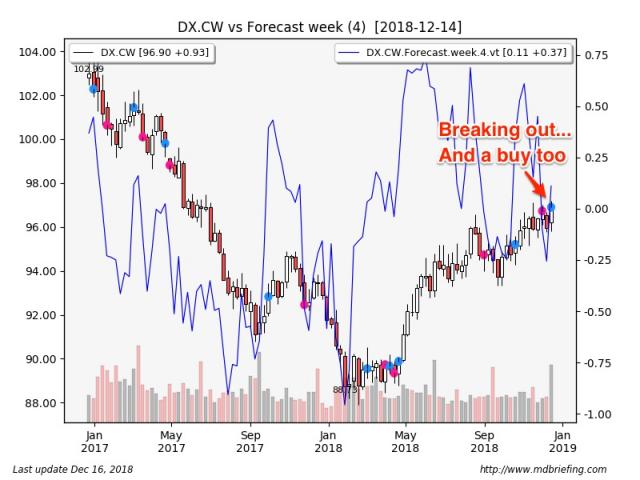 SPX fell -50.59 [-1.91%] to 2599.95. SPX made a dramatic new low on Monday but bounced back strongly, was unable to follow through on Tuesday-Thursday, and finally sold off again on Friday, making a new closing low. The weekly long black candle was a bearish continuation. During the week it looked as though SPX was struggling to move higher. There was no follow through, however, and after Friday’s sell-off, SPX ended the week in a downtrend in all 3 timeframes.

Financials led the market lower again this week, right along with homebuilders. Utilities did best. This was a largely-bearish sector map.

Globally, the US was the second-worst-performing equity market; it is now down 4.6% over the last 52 weeks. That still beats the Eurozone: down -17% over that same time period.

TLT moved up +0.06%, basically unchanged on the week. Forecaster issued a sell signal on Wednesday, although it moved back to near-neutral on Friday’s modest rally. TY fell -0.25%, also issuing a sell signal Wednesday. However, the move down wasn’t enough to move the weekly forecaster much at all; TY is in an uptrend in both the weekly and monthly timeframes.  That weekly uptrend looks quite strong. The 10-year yield moved up +4.1 bp to 2.89%. 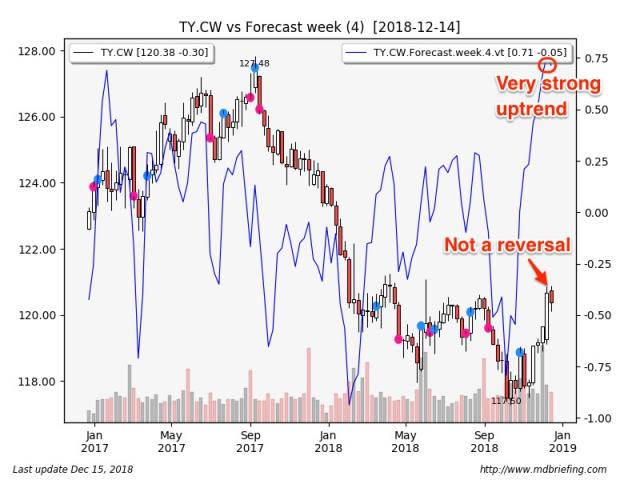 JNK rose +0.29%, moving up 3 days out of 5. Unlike SPX, JNK didn’t make a new low on Friday. I’m not sure that JNK is operating as a very strong “tell” as to where equities go next, but it seems clear that there is no panic in the junky debt market just yet.

Crude fell -0.76 [-1.45%] to 51.62. Crude spent the week chopping sideways. The strong API report on Tuesday gave way to a more neutral EIA report (crude: -1.2m, gasoline: +2.1m, distillates: -1.5m) on Wednesday, which the market didn’t particularly like so much. Its hard to say if this is a low or not. Friday’s drop resulted in a daily sell signal – this puts crude in a downtrend in all 3 timeframes. The weekly is hinting at a reversal, but so far, it hasn’t happened yet.  Hopefully the recent sideways move doesn’t end up being just a dead cat bounce.  If so – next stop is probably somewhere around 42. 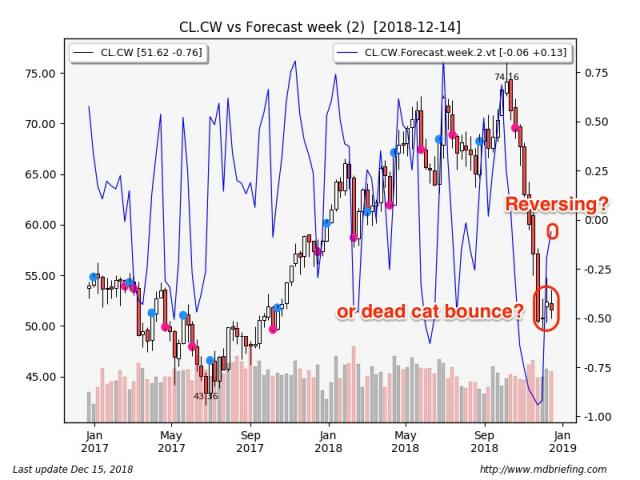 * Bullion Vault gold (https://www.bullionvault.com/gold_market.do#!/orderboard) shows no premium for gold, and a very wide spread for silver – almost 40 cents – with the mid-price suggesting a 20c premium.

The attempted SPX reversal on Monday had little to no follow-through during the week; if Monday’s bounce was engineered by the PPT, then nobody ended up buying the reversal. That said, the long bond didn’t move any higher, and the VIX actually fell, so the new low didn’t result in any sort of spike higher in fear. If the new low in SPX on Friday was about Chinese manufacturing ills, then presumably a tariff settlement would help address that particular problem. The dollar’s new highs and the bad news from China helped pull PM and other commodity prices lower. Crude can’t decide where it wants to go, flipping direction 5 times in 5 days.

Big bar gold premiums on gold remain low, silver’s premium has remained the same, while ETF discounts increased somewhat. There is no shortage of gold at these prices, but there does seem to be a shortage of silver, for certain products.

The COT report shows that short-covering was probably responsible for last week’s rally in silver. While the managed money longs are thin on the ground, the shorts are also dwindling away. If we are to see a further move higher in silver, it will have to be from managed money jumping in long. Good news: if we do move lower, there aren’t too many longs for the commercials to chase out of the market; there should be relatively few stops for them to run.

Right now, we are in the middle of tax-loss-selling season. All the items which have dropped this year are under pressure, due to people selling in December in order to match off gains vs losses. Those same items will generally bounce at end of December/early January, but right now, the beaten-down stuff is being sold fairly hard. For the last few years, that has been the lot of the mining shares; this year we seem to have dodged this particular bullet.  Hmm.  Maybe that’s even what is causing some of the pressure on SPX.

Example: over the last 52 weeks, returns were as follows: Homebuilders -23%, Financials -12%, Energy -10%, Materials -13%.  This week, the 3 worst-performing groups were Homebuilders, Financials, and Energy.

Next week: FOMC meeting on Wednesday. My focus is on the dot-plot projections for 2019. Is the Fed going to stop raising rates, as Powell hinted in his speech a few weeks ago? Does he still think that rates really “just below neutral” or was he just being cagey?  No more interest rate increases would probably be positive for gold.