The metals sector map has silver leading gold lower, with the miners stuck in the middle. This week both metals and the miners have fallen below both the 9 and 50 MA lines. PM has moved back into a medium-term downtrend. All items still remain above the 200 MA lines, which is the marker for the longer term trend, and that remains positive. Copper did best, which suggests optimism in the eternal wait for the US-China trade deal.

This week, gold fell -5.27 [-0.36%] to 1465.44 on moderate volume. The shooting star candle was mildly bearish (35%), and forecaster moved deeper into its downtrend. Gold ended the week in a downtrend in all 3 timeframes, while gold/Euros is in a downtrend in just the daily and monthly timeframes.

The Dec 2019 forecast is now projecting no rate increase.. 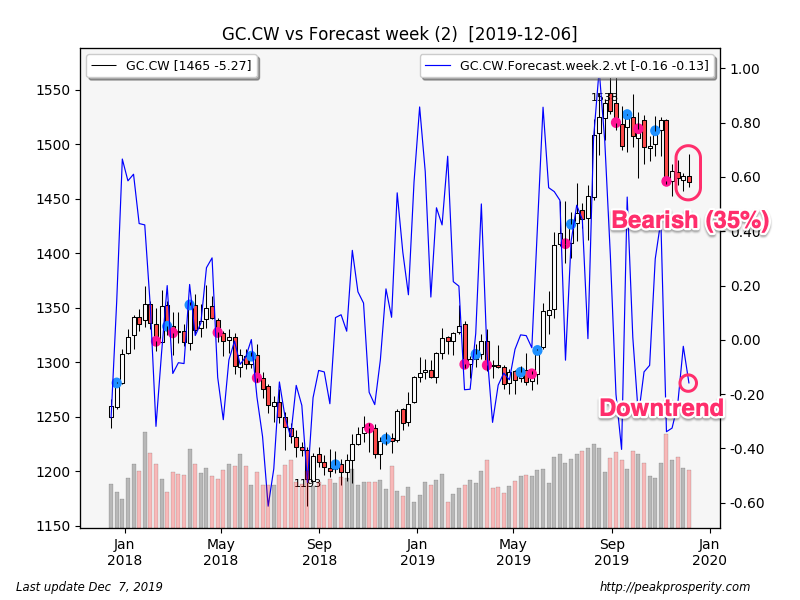 Silver fell -0.47 [-2.75%] to 16.63. The confirmed bearish NR7 pattern was bearish (46%), and forecaster moved into a slight downtrend. On Friday, silver broke down to a new multi-month low, which is a bearish sign. Silver has been in a pattern of lower highs and lower lows since late September, and Friday was yet another new low. Silver is in a downtrend in all 3 timeframes. 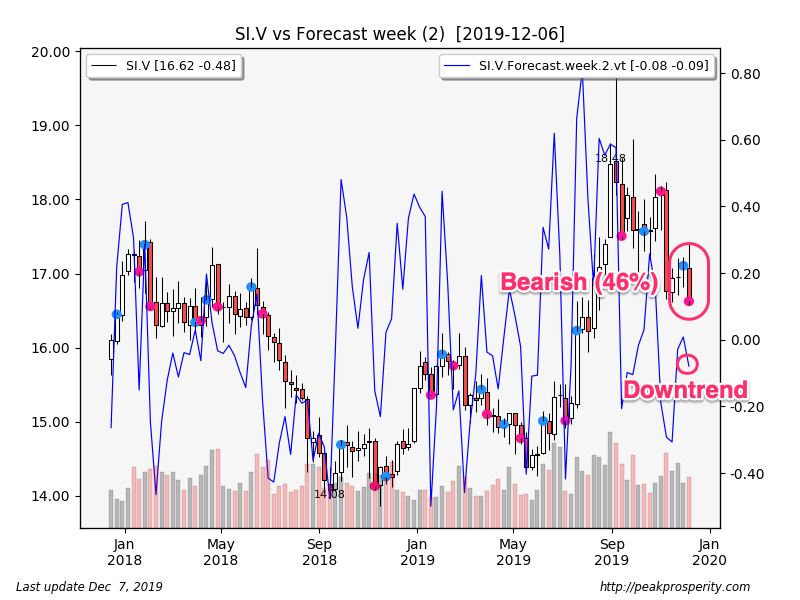 XAU dropped [+0.40%], the shooting star candle was mildly bearish (32%), and forecaster moved lower but remains in an uptrend. Friday’s daily swing high looked pretty ugly (63% bearish), which was enough to drop daily forecaster into a downtrend. Even so, XAU closed the week in an uptrend in both the weekly and monthly timeframes. Unlike silver, XAU has yet to make a new low. 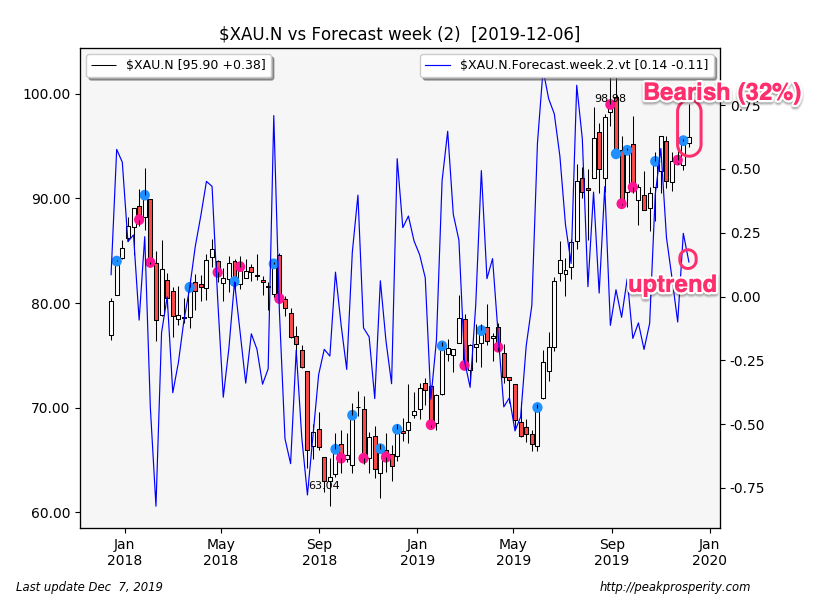 The buck dropped -0.56 [-0.57%] to 97.27 on extremely heavy volume. The confirmed bearish doji pattern was quite bearish (68%), and forecaster dropped into a downtrend. Even though the weekly pattern looked pretty unpleasant, on Friday there was a strong dollar rally; daily candle pattern was a strong-looking bullish engulfing (50%), but it was not enough to pull daily forecaster back into an uptrend. The buck ended the week in a downtrend in both daily and weekly timeframes. 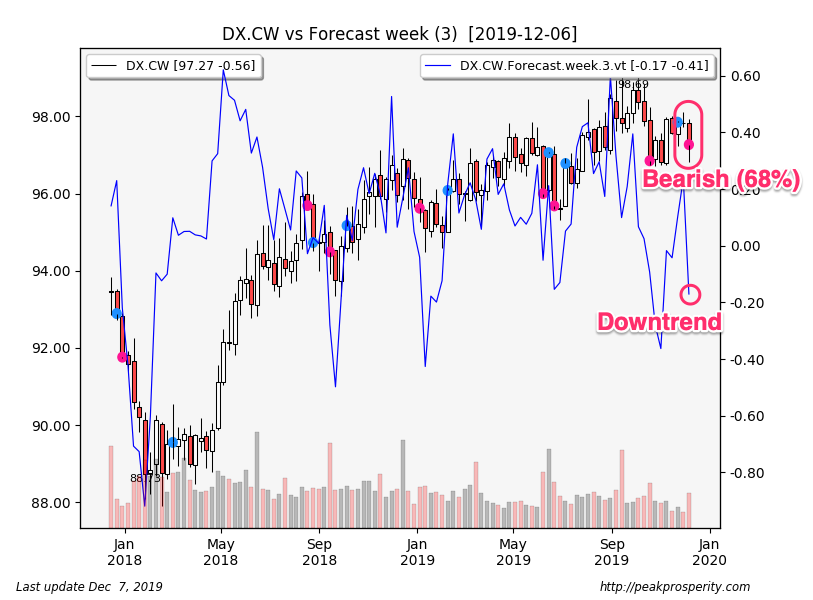 SPX rose +4.93 [+0.16%] to 3145.91 on moderate volume. The doji candle was a bullish continuation, and forecaster plunged but remained in an uptrend. SPX daily actually dropped into a downtrend mid-week due to the Monday-Tuesday selloff (based on Trump’s comment that he was considering waiting until after the election to make a trade deal with China), but bounced back by end of week when that comment was walked back. SPX ended the week in an uptrend in all 3 timeframes. 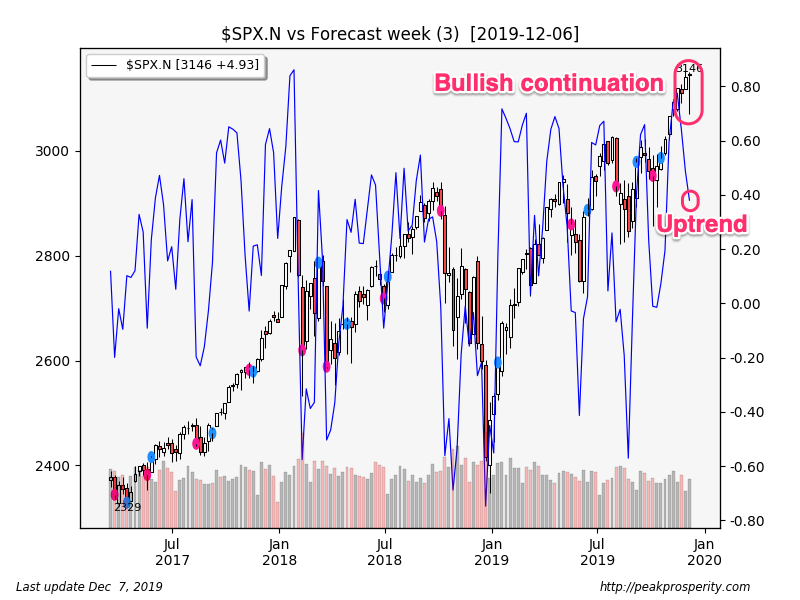 The US equity market was dead last this week, with Latin America at # 1. 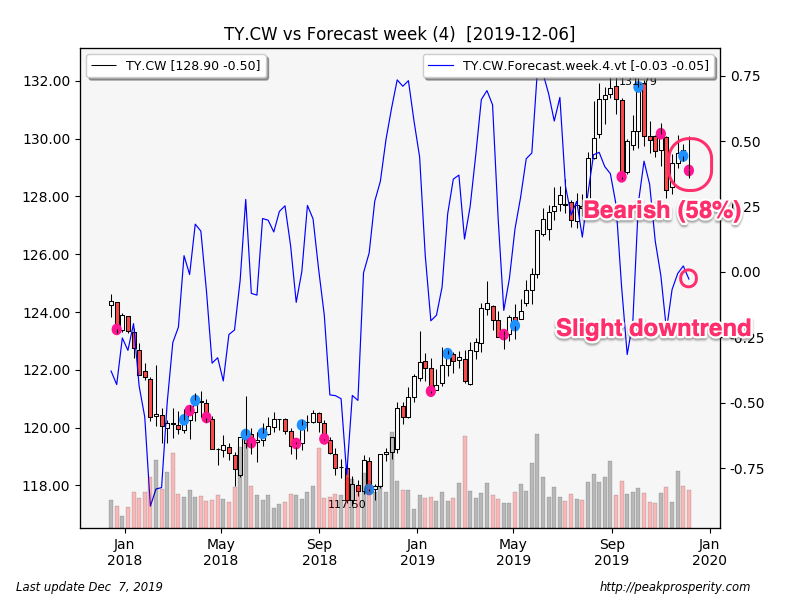 JNK fell [-0.07%], the spinning top candle was mildly bullish (35%), and forecaster ended the week in an uptrend. As with SPX, JNK fell hard on Monday and Tuesday, but recovered most of its losses by end of week. BAA.AAA differential fell -3 bp to +88 bp. There are still no real worries about credit quality right now.

Crude jumped +3.59 [+6.48%] to 58.96 on heavy volume. The opening white marubozu was a bullish continuation, and forecaster jumped strongly back into an uptrend. Crude ended the week at a new multi-month high, and crude is now in an uptrend in all 3 timeframes.

This week’s EIA report was somewhat bullish: crude -4.9m, gasoline: +3.4m, distillates: +3.1m, but the moves in crude came this week as a result of the OPEC+ meeting, where it was agreed the group would cut production by 500 kbpd. When the market seemed to have some doubts about how that would work out given the cheating that has gone on, on Friday the Saudis announced they were going to continue to over-comply with their production quota, and then oil broke out to new highs. 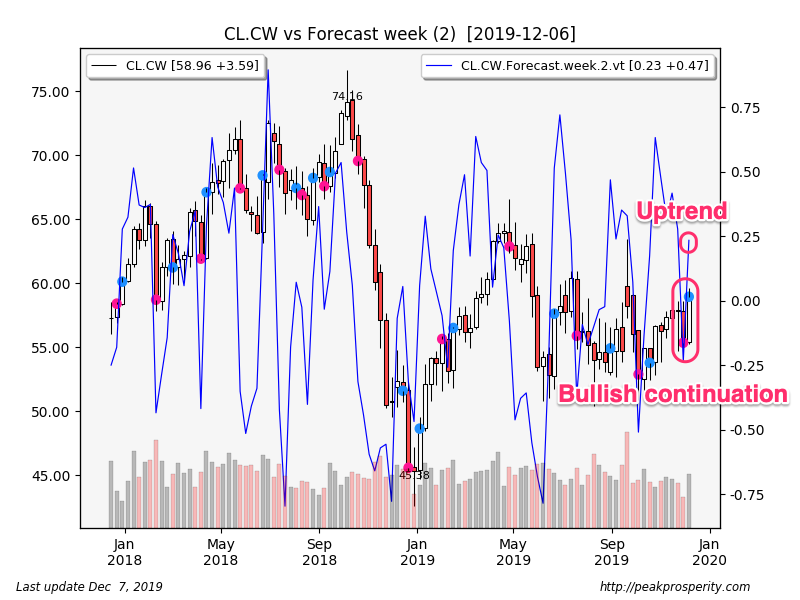 * Premium for physical (via Bullion Vault: https://www.bullionvault.com/gold_market.do#!/orderboard) vs spot gold (loco New York, via Kitco: https://www.kitco.com/charts/livegoldnewyork.html) shows a $1 premium for gold, and a 4 cent premium for silver.

Gold and silver and the miners fell this week, with silver leading the pack lower, which is bearish for PM overall. Silver actually broke down to a new low on Friday, which looks pretty unpleasant. Add to this that the buck dropped fairly substantially, and so the poor PM performance looks even worse when viewed in Euros.

Payrolls looked strong, and the durable goods report forecasts expansion next month. No recession on the horizon, at least not that I can see.

Futures are forecasting that the Fed will hold rates steady – the FOMC meets next week, with the usual announcement on Wednesday at 2pm.

Not-QE continues, although this week’s $13 billion increase is slower than it was in prior weeks. Perhaps the $305 billion they’ve already printed was enough to mostly paper over the secret problem that has Powell pretending nothing serious is going on. Maybe. I’m guessing all that new money looking for a home has helped equities to avoid selling off. That, and all the stock buybacks. Fed meets next week; I wonder if the feckless press will ask him more than one question about the money printing.

Big bar premiums on gold have declined, and the big COMEX silver bars at the dealer I watch were sold out! I haven’t seen that for a while. ETF discounts have increased somewhat. Seems like physical silver buyers are buying the dip.

Gold OI jumped again this week, with most of the new paper appearing on the day of Trump’s comment about waiting until after the election to do the deal with China. Hmm. No, not intervention at all.

As I’ve said earlier, I think a US-China trade deal probably doesn’t get done. The problem could have to do with enforcement. Given the history of the CCP, any agreement that gets signed will be ignored by the CCP when it becomes convenient to do so. US knows this, and wants enforcement. China, well, it doesn’t want enforcement. And of course the issue of tariff rollbacks remains as well.

And yet – both parties (Trump, and the CCP) seem content to keep the deal “very close to completion” but not actually signed – and also not actually rejected. What will happen on Dec 15, when the new tariffs are scheduled to take effect? Any bets Trump kicks the can down the road due to “progress”? It is hard to know. For Trump, its about levitating SPX, and for the CCP, its about tariffs and the feared mass exodus of US globalized companies out of China that a tariff increase would likely bring about. Both win when hope still remains – so, hope remains, in spite of all the acts that might otherwise derail the process.

I am left looking at the silver breakdown to 16.63. My stuff all suggests this is not a low. Of course, we’re in a news driven market, so headlines might intervene, but absent a rescue by failed trade talks, silver’s breakdown suggests we will probably see lower silver prices ahead. That’s annoying, since I’m long silver, but what can you do? 🙂

Mish had a post this weekend which suggested that the “nonfarm payrolls” for small shops (1-19 employees) was giving off a recession warning.  True?

Well, maybe.  Problem is, this series has a very short history – it dates back to 2005 – but it does seem recessionary based on the 2008 event.

But there is another confounding factor – small business in the US is being slowly strangled by the Fed over the past 10 years, because the ultra low rates during that period favors big bloated monster businesses (who can get really cheap credit) over the smaller operators who cannot. 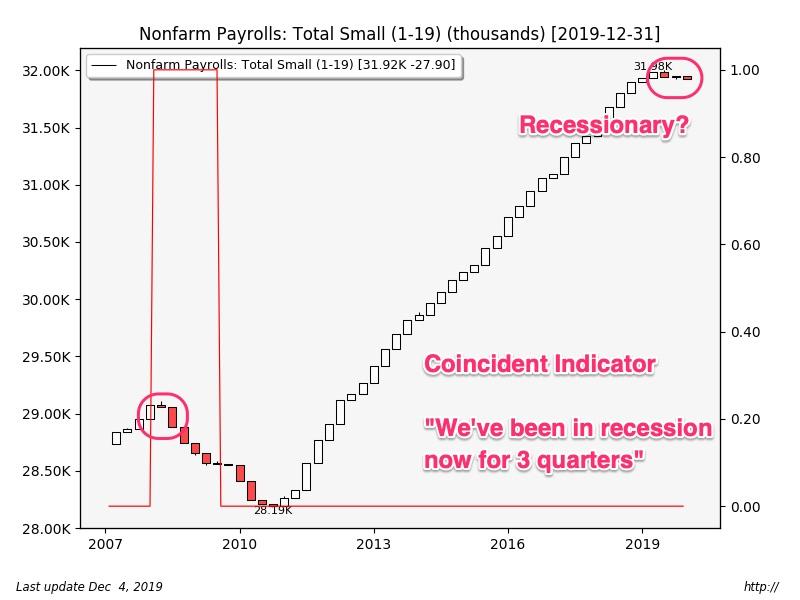