The weekly metals sector map has some surprising results this week; platinum led, with a monster 10% gain. Silver led gold higher, with the miners in the middle. Palladium brought up the rear, actually falling on the week. Gold/Euros did relativelly poorly, telling us that perhaps half of gold’s gains were just a currency effect from the plunging dollar. Most items are back above the 9 MA.

For the week, gold rallied +51.65 [+2.88%] to 1842.59 on moderately light volume. The long white candle was a reasonably strong bullish reversal (47%), forecaster climbed, but remains in a downtrend. Gold is in a downtrend in both the weekly and monthly timeframes.

Gold/euros moved up +20.20 [+1.35%] to 1517.18 on moderately light volume. The bullish harami candle was a reasonably strong bullish reversal (45%), forecaster dropped, moving deeper into its downtrend. Gold/euros is in an uptrend in the daily and monthly timeframes.

Gold staged a rally this week; Tuesday’s swing low was reasonably strong, and gold did manage to end the week back above both the 200 and the 9 MA lines. Even so, much of the move was a currency effect, and Friday’s candle print was somewhat bearish (36%) – leaving the rebound somewhat iffy going into the weekend. Gold may have run out of steam for the moment; a new paint-still-drying reversal model for gold is looking short-term bearish – FWIW. 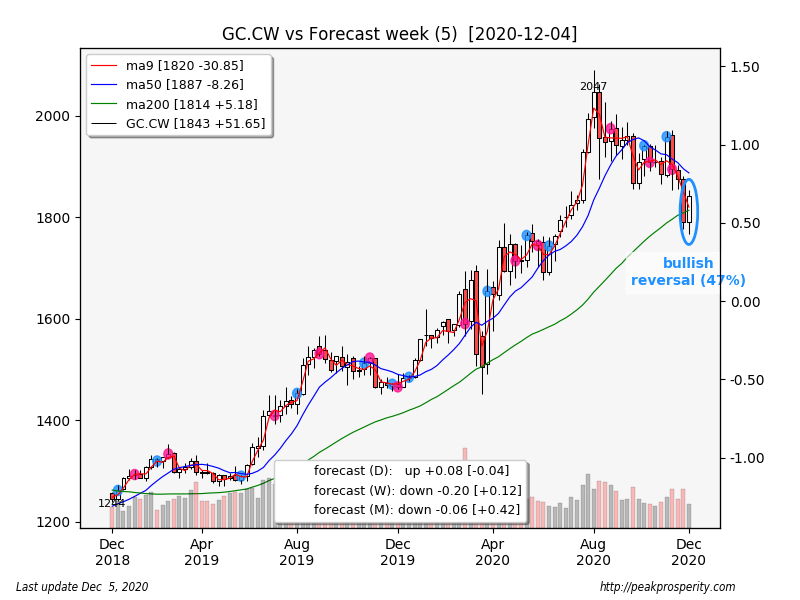 Silver jumped +1.55 [+6.81%] to 24.32 on moderately light volume. The long white candle was a possible bullish reversal (31%), forecaster climbed, rising into an uptrend. Silver is in an uptrend in all three timeframes.

Silver’s rally was much stronger than gold; it ended the week back above both the 9 and 50 MA lines. Most of the gains came on Tuedsay, from that very strong swing low candle print. The move was enough to propel weekly forecaster back into a (slight) uptrend. Silver ended the week with a much stronger looking chart than gold.

Note also that during the recent correction, silver did not make a new cycle low, while gold did. That’s significant, and bullish too. It just feels like there is more dip-buying for silver than there is for gold. 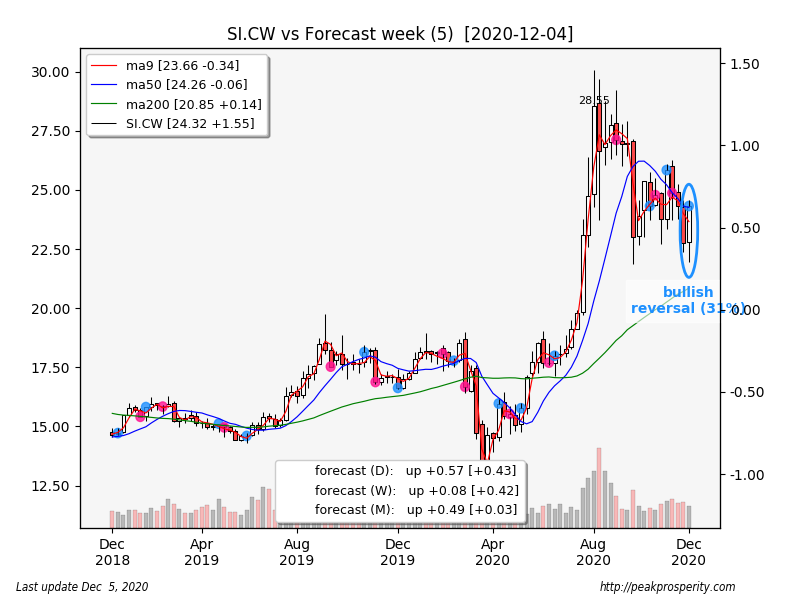 While the miners printed a strong-looking weekly swing low, it wasn’t quite enough to convince forecaster to reverse direction. Also, late in the week, the miners appear to run out of steam; there was selling pressure on both Thursday and Friday, although it was relatively modest. After leading the metals higher at the start of the week, the miners are now back in a mild downtrend in all timeframes. Perhaps – longer term – this week’s strong candle print is the thing to take away. 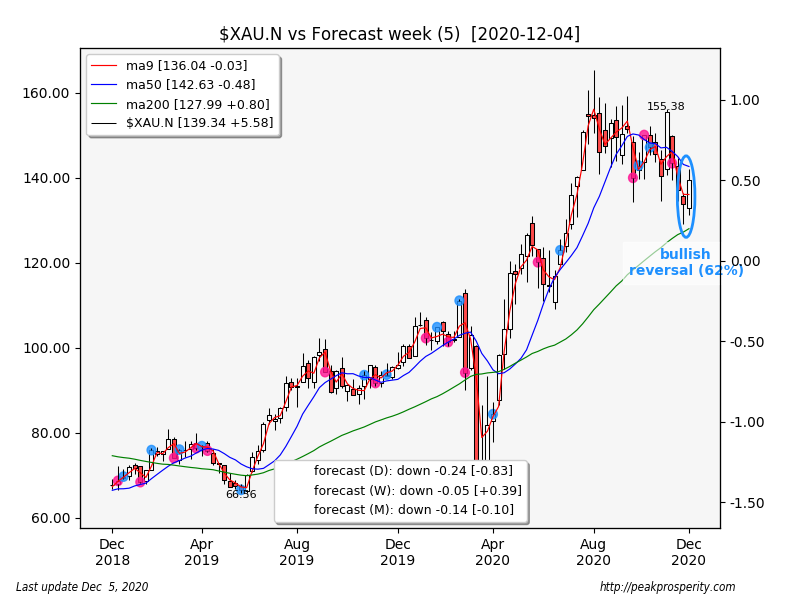 Copper climbed +0.11 [+3.23%] to 3.52 on moderately light volume. The white marubozu candle was a bullish continuation, forecaster dropped, but remains in an uptrend. Copper is in an uptrend in all three timeframes.

Copper continues to move higher – it made a new 7 year high just on Friday. Looking at the monthly chart, copper has been a one-way rocketship off the $2.00 pandemic low back in March. D/W/M RSI-7 = 86/84/81. That’s nothing compared with bitcoin, but at these levels, copper does look a bit overbought. There is no hint of a top yet for copper. 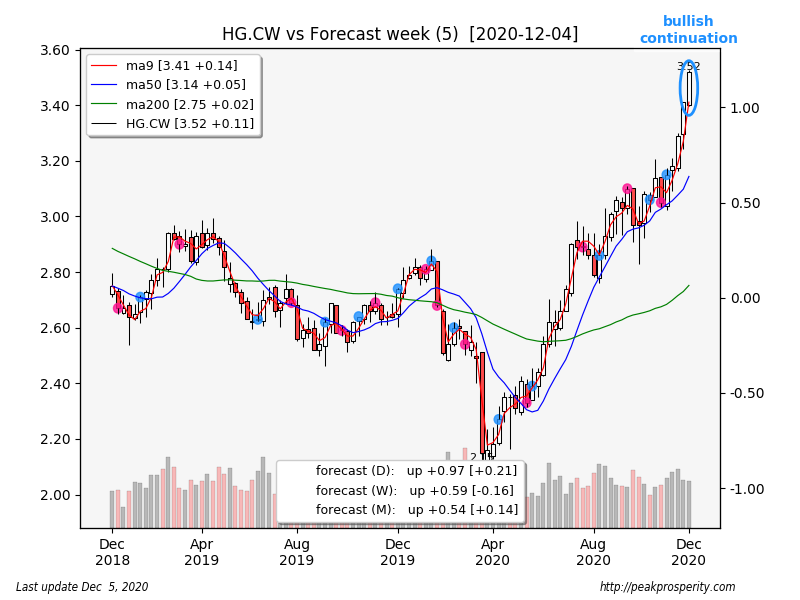 The buck plunged -1.14 [-1.24%] to 90.61 on very heavy volume. The long black candle was a bearish continuation, forecaster was unchanged and remains in a downtrend. The buck is in a downtrend in all three timeframes.

The buck sold off hard this week, dropping 4 days out of 5, making a new 3-year low on Friday. D/W/M RSI-7 is 11/29/26, which means the buck is quite oversold in the near term. I’d expect a bounce of some sort. Unless those pesky foot-breaking Biden Dogs (“Lockdown”, and “Mandatory Vaccine”) make it into the White House.

Just a guess, of course. 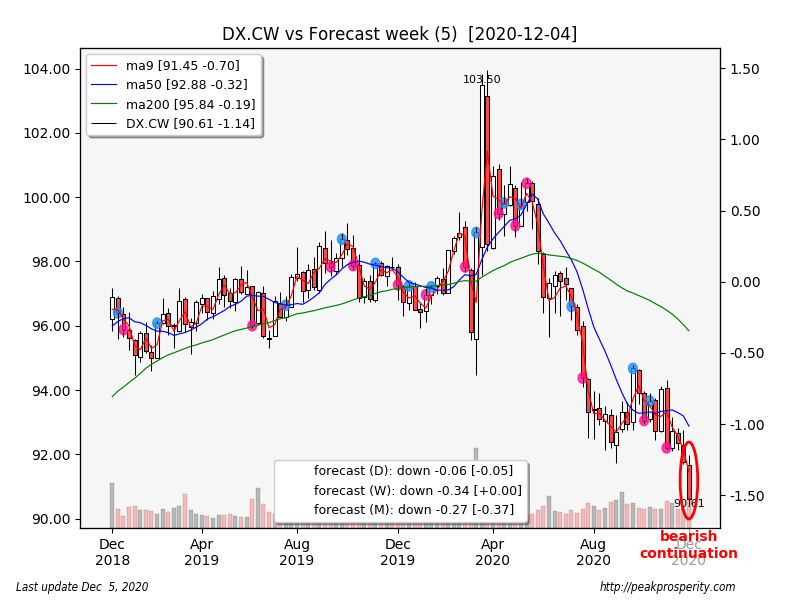 Crude rallied +0.60 [+1.32%] to 46.18 on moderate volume. The short white candle was a bullish continuation, forecaster dropped, but remains in an uptrend. Crude is in an uptrend in all three timeframes.

Crude fell early in the week, then rallied back to a new post-pandemic high on Friday. The modest move triggered a brisk rally in energy equities (XLE:+4.42%, OIH:+9.50%). Crude ended the week in a strong uptrend. 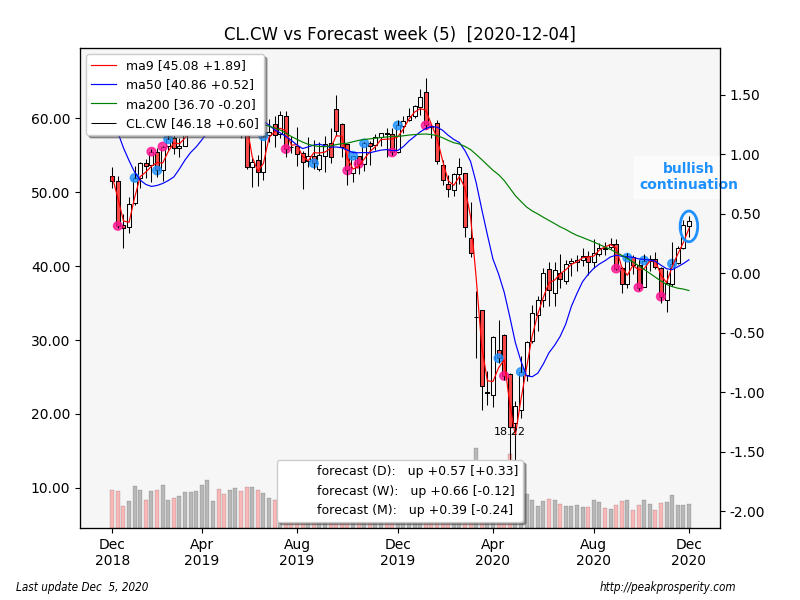 SPX moved up +60.77 [+1.67%] to 3699.12 on moderate volume. The closing white marubozu candle was a bullish continuation, forecaster dropped, but remains in an uptrend. SPX is in an uptrend in all three timeframes.

SPX made a new all time high on Friday; momentum appeared to have stalled out earlier in the week, but Friday’s strong rally turned things back to positive once again. SPX remains in a reasonably strong uptrend in all timeframes. As mentioned, energy was the leading sector this week.

One of the strongest sectors post-November 3rd is XLF – the banksters. They gapped up on the 4th and just have never looked back. Why do we think this is? 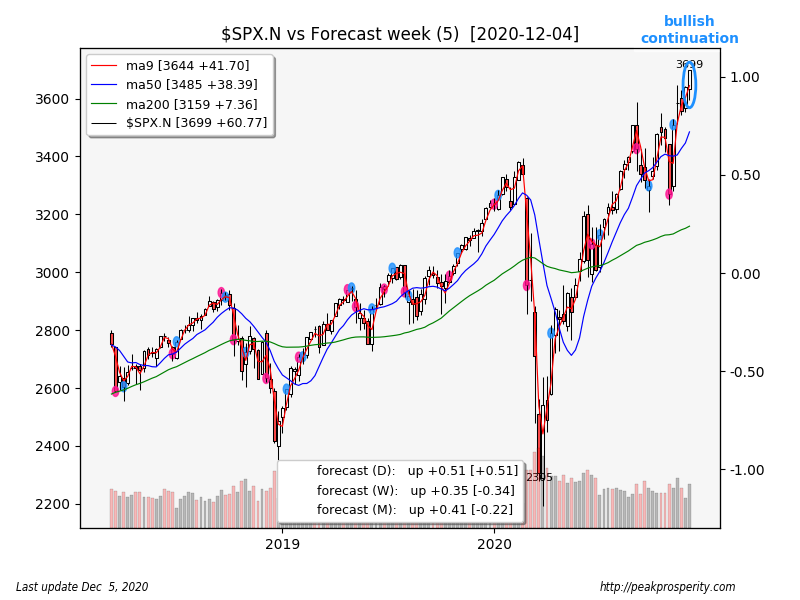 The 10-Year yield rose +13.0 bp to +0.97%. The white marubozu candle was a bullish continuation, forecaster climbed, moving higher into its uptrend. The 10-Year yield is in an uptrend in the weekly and monthly timeframes.

Bonds fell fairly briskly this week, with most of the action happening on Tuesday and Friday. The 10-year yield looks as though it may be ready to break above 1% – for the first time since March. 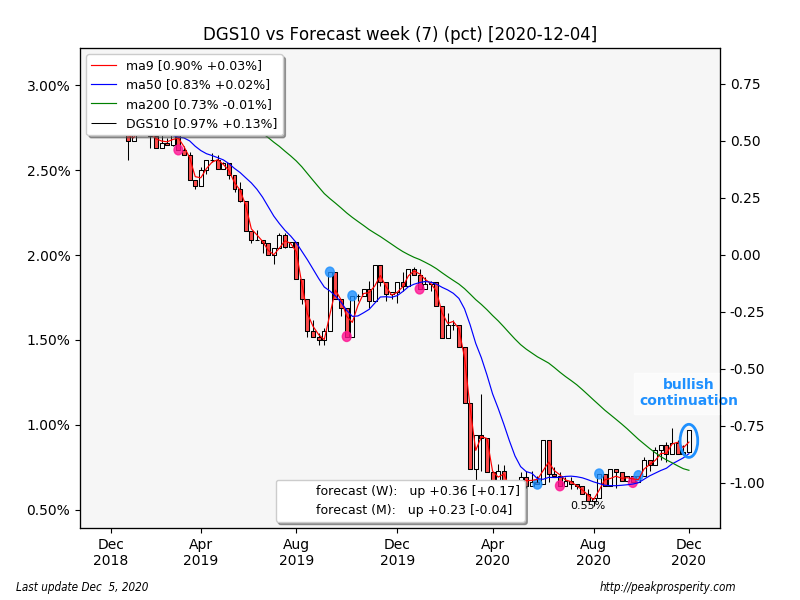 JNK rose +0.58%. The short white candle was a bullish continuation, forecaster climbed, moving higher into its uptrend. JNK is in an uptrend in the daily and weekly timeframes.

Crappy debt broke out to a new post-pandemic high this week. This supports the risk-on mood in equities. 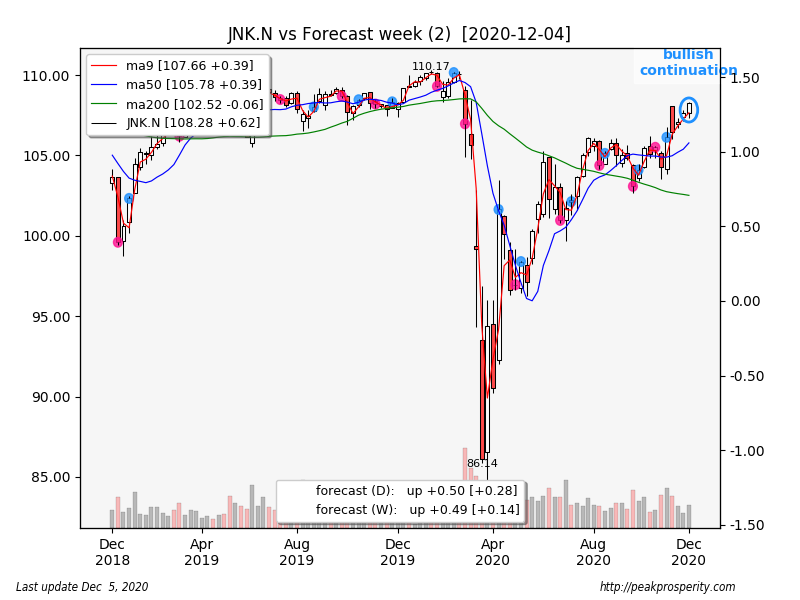 The GLD ETF tonnage on hand dropped -12.08 tons, with 1183 tons remaining in inventory.

Durable Goods, new orders: headline +1.32% m/m, capital goods new orders (excl aircraft): +0.79% m/m, shipments: +1.27% m/m. New orders are just about back to pre-pandemic levels, shipments have completely recovered, and capital goods are way above where we were back in March. My sense: spending has shifted from “experiences” to “things” in a massive way. Lockdowns are definitely good for some. 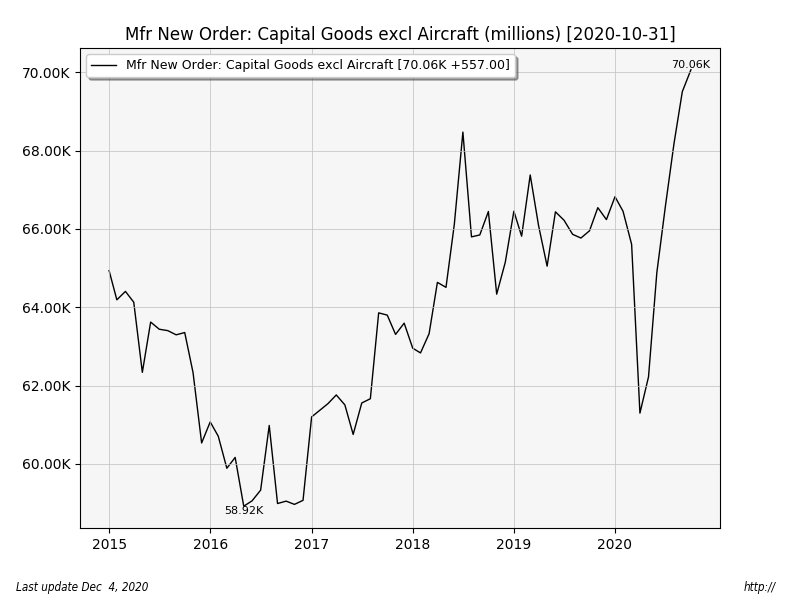 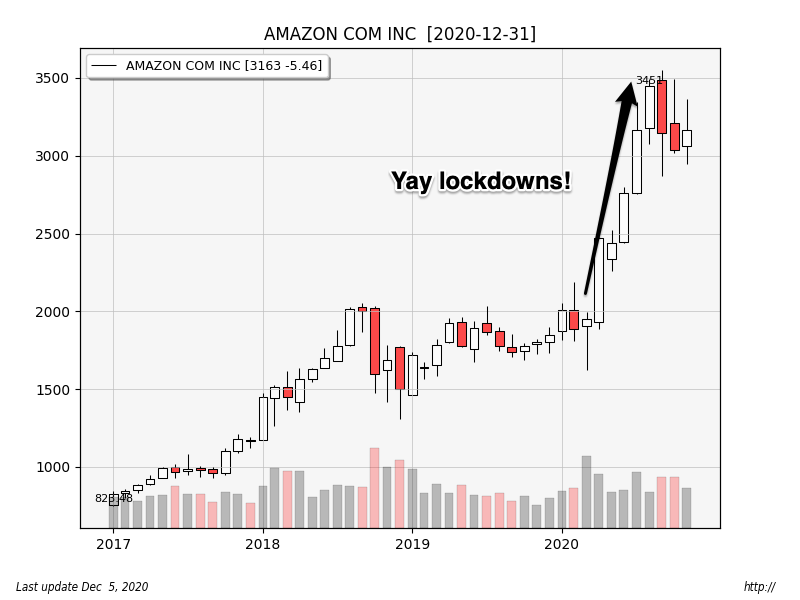 Gold, silver, and the miners all rallied this week, printing some reasonably bullish candle prints, and in the case of silver, resuming a weekly uptrend – albeit a modest one. Both gold and the miners made a new low during the recent correction, but silver did not; this suggests to me that there is more of a bid underneath silver than either gold or the mining shares.

The recovery in the metals came once first notice day at COMEX had passed. Coincidence? I don’t think so.

Platinum deserves special mention; it is incredibly strong right now for reasons that escape me. Perhaps the automakers have decided to swap platinum for palladium in those catalytic converters? Its hard to say. But prices don’t lie – at least not over the longer term anyway.

Bond yields moved higher as the dollar plunged; owning bonds is a backdoor bet on the buck. Money fled both instruments this week. The buck is near-term oversold, but it is hard to have a bullish case for the buck if a $10 trillion “green new deal” funded by MMT is in the offing. Blame the Biden Dogs for that one.

Risk assets all moved higher; SPX made yet another new all time high, crappy debt has almost completely recovered from its pandemic losses, copper made a 7-year high, and crude continues its slow recovery, managing to eek out a new 8-month high too.

It is interesting to see the huge difference between the performance of crude and copper. Perhaps this difference can be traced to the Durable Goods report – the new orders have just screamed higher, and perhaps all those durable goods (in aggregate) – “things” – require lots of copper? Maybe? And possibly they don’t require nearly as much crude oil, which seems to be more tied to “experiences.” Its a thought anyway.

As long as our “Medical Masters” in government continue to impose lockdowns – a predictable consequence of them “not noticing” effective treatments – this shift in demand will probably continue. Just a guess.

Why do this? One explanation: you can’t rush all that never-before-used vaccination technology into use without an EUA, and you can’t get one of those if there are already effective treatments. And as the US FDA goes, so goes the world. Ergo, no effective treatments can be found in the US.

It is worth viewing what the NIH says about ivermectin:

The COVID-19 Treatment Guidelines Panel recommends against the use of ivermectin for the treatment of COVID-19, except in a clinical trial (AIII).

Ivermectin is not approved for the treatment of any viral infection, including SARS-CoV-2 infection. The FDA issued a warning in April 2020 that ivermectin intended for use in animals should not be used to treat COVID-19 in humans. 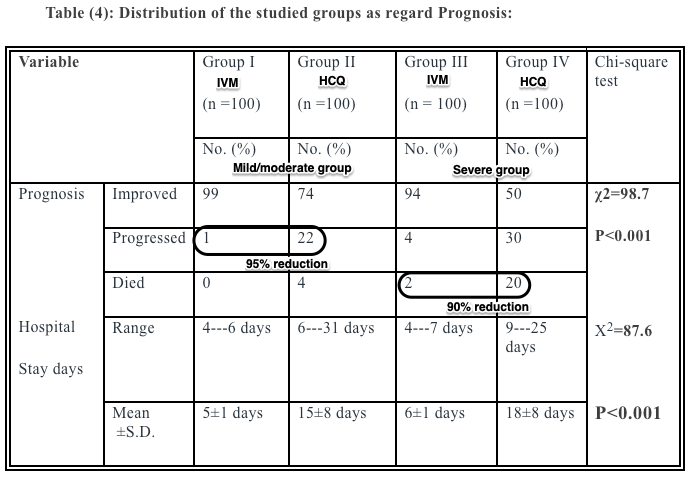 But sadly, this science (and treatment) is only available in Egypt. And Brazil. And Mexico. If it were available to the West, perhaps the demand for that untested vaccine technology might not be as high. And we might start objecting to lockdowns. And that wouldn’t do at all. 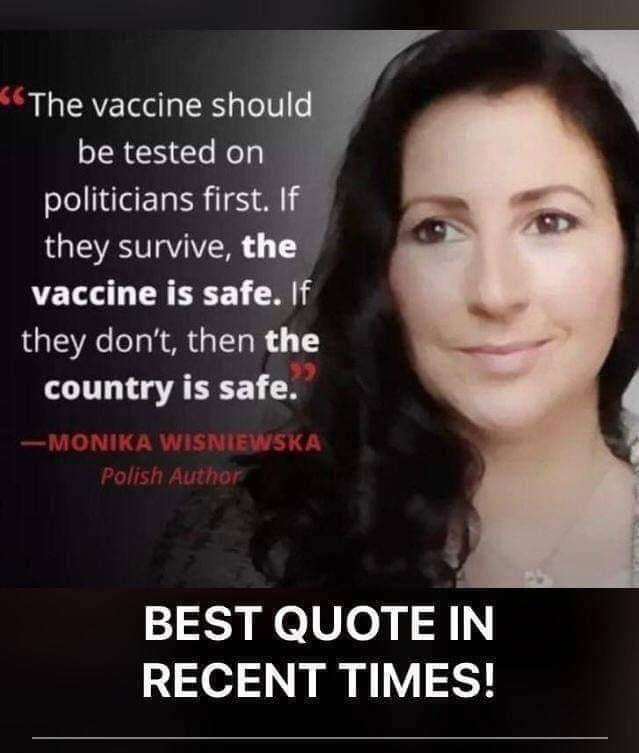 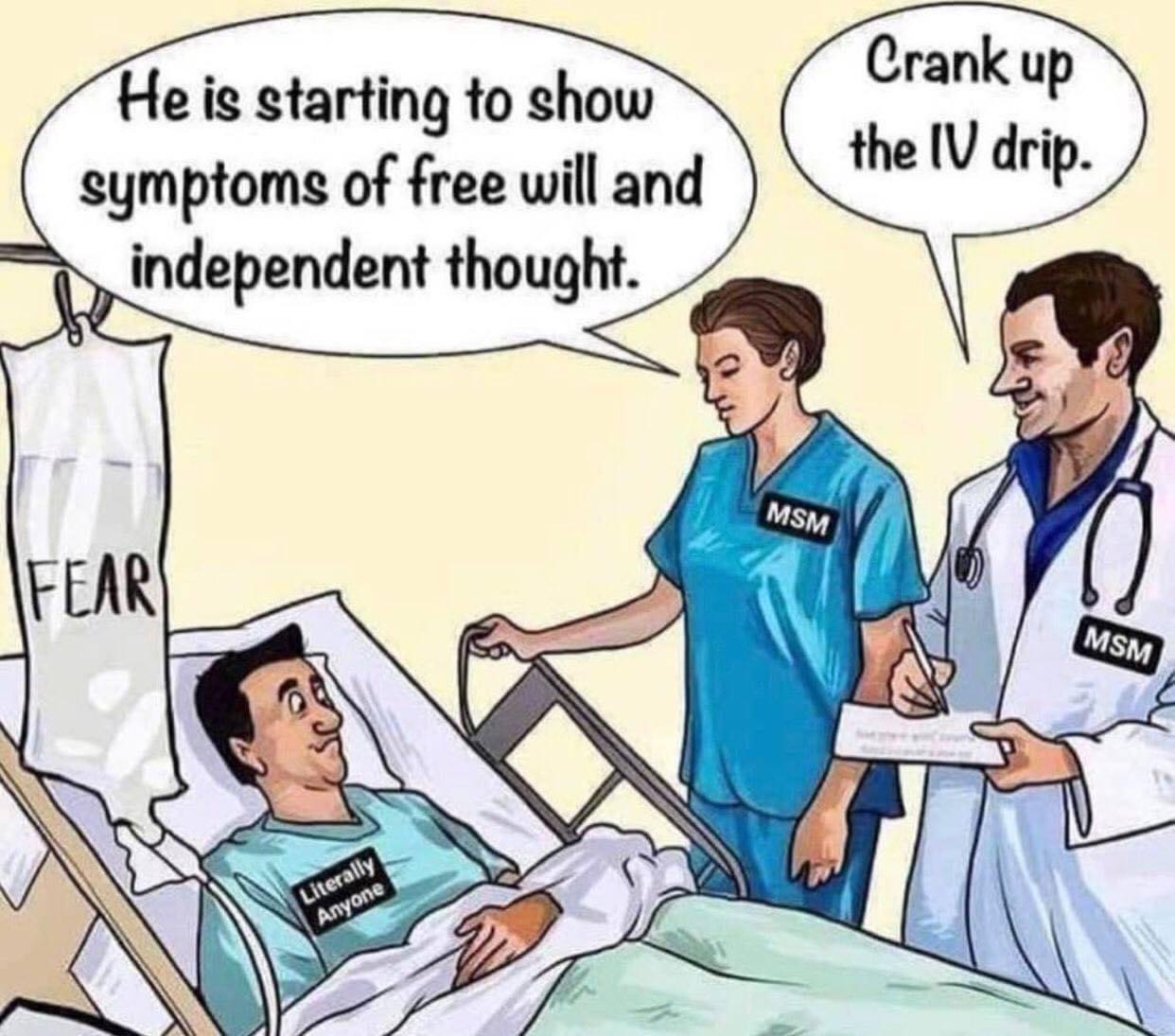 I found Hussman’s latest commentary to be pretty intriguing.

Hypervaluation and the Option Value of Cash

I specifically liked his observations on holding cash right now. It’s inline with JAG’s second law of market psycho-thermal-dynamics; buy and hold what is most hated by the herd.

Sure, you’re going to get your face ripped off during the “running of the bulls’, but when it matters most, you will have what the herd wants the most.

Right now, the herd thinks cash is trash. Only an idiot would hold cash right now. Here is what Hussman wrote on cash:

The option value of cash

With our value-focused asset allocation encouraging the highest allocation to cash since 1929, aside from the peak of a post-crash correction in early-1930 that preceded the bulk of the 1929-1932 collapse, now seems to be an ideal time to explain why the interest rate on cash can be a poor measure of the value of cash (or hedged equity) as an investment alternative.

Let’s begin with two simple examples, and then we’ll formalize the idea.

Clearly, if you buy the security today, you’ll double your money two days from now. That’s a 100% expected return for each dollar you invest, over that 2-day period. If you wait, you’ll earn nothing on the first day, but you’ll then have two possibilities. If heads, you’ll get just 1% on your invested money. If tails, you’ll get a 300% return, quadrupling your money. With a 50/50 chance at each, your expected return for every dollar you invest is 0.5*1% + 0.5*300% = 150.5%. So waiting adds 50.5% to your expected return over that 2-day period.

With an extreme example like this, risk aversion would undoubtedly be a consideration, but from an expected return perspective, and particularly if we repeat the game over and over, you’re clearly better off staying in cash on day one, despite the very high expected return from investing right away.

There is so much more in his article, including why stocks won’t provide a hedge against inflation at these extreme valuations. Also, there is this little nugget:

At present, we expect the current cycle to be completed by a market loss on the order of 65-70%….

Yes, I know. A drawdown of 65-70% sounds insane and utterly preposterous, but the revulsion to that idea is largely due to pervasive speculative psychology, not historical evidence, cash flows, or fundamentals.

From the standpoint of fundamentals, the most reliable set of valuation measures we’ve tested across a century of market cycles place current valuations at roughly 3.3 times the run-of-the-mill norms from which historically normal market returns have actually emerged.

Bitcoin, copper, bonds, the dollar, and oil have all been screaming inflation recently (it’s funny how gold seems to disagree). But the one asset that has the highest probability of outperforming all of them, in the long-run, is zero-interest cash. Isn’t that perfect?