The weekly metals sector map tipped mostly back into a downtrend this week; apart from palladium, which managed to avoid selling off.  Silver led gold lower, and juniors led seniors lower.  It was a mostly-classic bearish week. The only outlier was copper; it doesn’t often drop more enthusiastically than silver, but it definitely did so this week.  That suggests trouble in China, and given the size of the drop – Big Trouble.  All of last week’s hope-for-a-tariff-solution gains have utterly vanished.

Gold fell -24.03 [-1.94%] this week, with most of the losses happening on Friday. Gold issued a weekly sell signal; it is now in a downtrend in all timeframes – and in Euros as well. This week’s drop was not about currency.  Gold also plunged through both the 9 and 50 MA lines. Really, there was no good news for gold this week – gold has moved into a downtrend.

The December rate-increase chances rose to 76%. 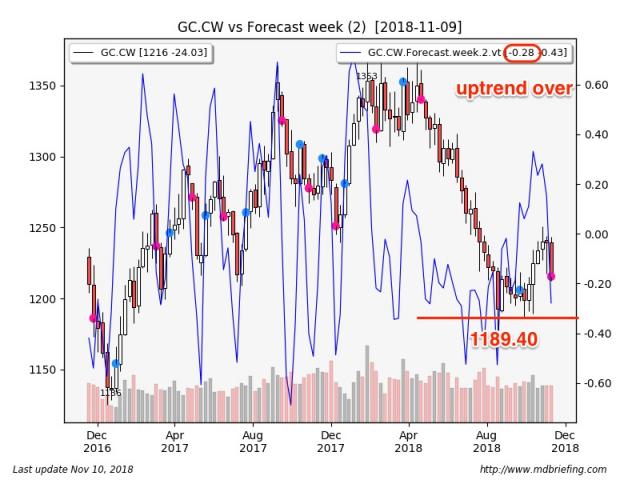 Silver plunged -0.61 [-4.17%] this week; silver printed a swing high on Monday, and never looked back, dropping clean through its lower support level on Friday. Like gold, it issued a weekly sell signal, which puts silver in a downtrend in all timeframes. Silver is also well below all 3 moving averages, through support, and appears on the way to re-testing the recent lows at 13.96. Given the accelerating speed of the downtrend, it is not clear at all that will hold. The gold/silver ratio shot up +1.84 to 85.42. I keep waiting for that to matter; so far, it hasn’t. 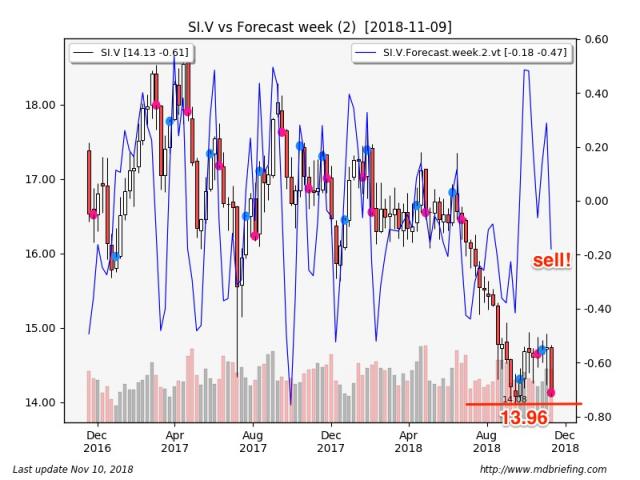 Miners fell also; XAU plunged -4.51%. It was all downhill after Tuesday’s swing high; the miners ended the week in a downtrend in the daily and weekly timeframes. Friday’s hammer candle looked good on the chart, but the code says it was not a bullish reversal. Like gold and silver, XAU is now below all 3 moving averages. 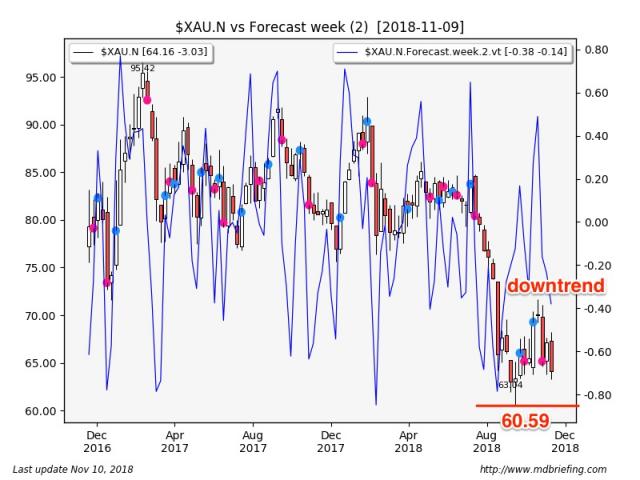 The buck rose +0.35 [+0.36%] to 96.42. The buck made its low on Wednesday, printed a swing low on Thursday, and ended Friday within range of the previous high of 96.72. The big rally for the buck came on Thursday, following the FOMC meeting where the Fed ended up changing nothing.  My guess: changing nothing was actually dollar-bullish, since Trump had placed strong pressure on the Fed not to continue raising rates, and by not-changing-anything, 3-4 more rate increases appear to be baked into the cake.

The buck is back in an uptrend in all 3 timeframes. 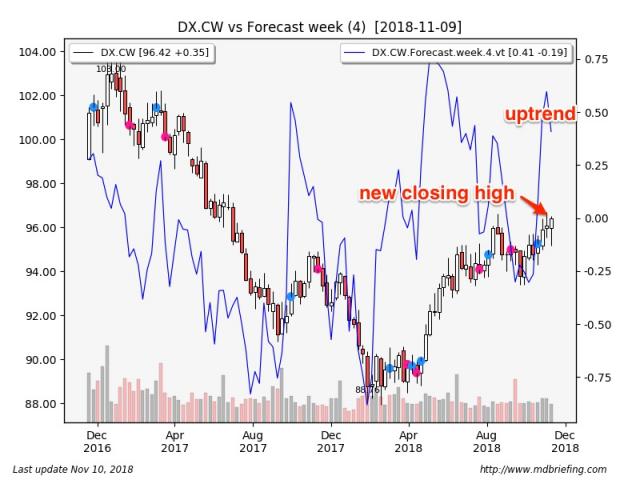 SPX rose +57.95 [+2.13%] to 2781.01. Most of the gains came on a huge post-election rally on Wednesday, with some retracement happening at end of week. Although the daily and monthly are both in uptrends, the rally was not enough to pull the weekly out of its downtrend just yet. However, the weekly swing low pattern was extremely bullish (82%), so I think the momentum is probably to the upside right now.

The sector map shows sickcare (+4.13%) leading along with REITs and Utilities, while homebuilders (-0.89%) trailed. That’s not a particularly bullish configuration. In fact, looking at the map overall, only the yield-sensitive (safe haven) components are all green. All of the rest of the items look spotty.

Globally, the US was the top performer this week, while Latin America did worst.

Gold was hit hard in all currencies, doing worst in GBP. 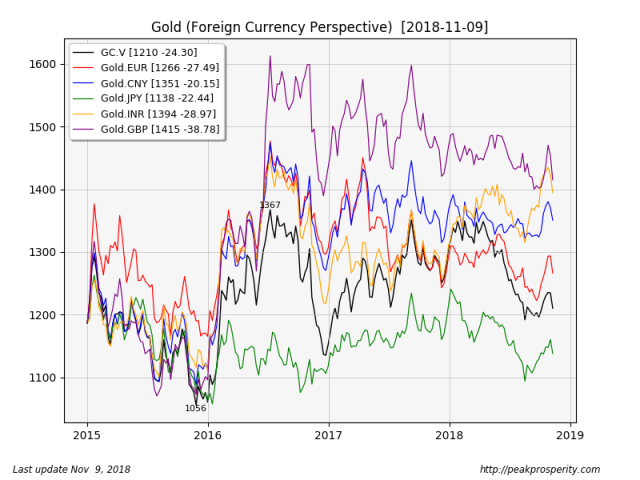 TLT climbed +1.21%, issuing a buy signal on Friday, managing to print a 6-candle swing low – that’s how long it took to form a reversal. TY rose +0.09% for the week, printing a strong swing low on Friday, but remaining in a downtrend on both the daily and monthly timeframes. The 10-year yield fell -2.5 bp to 3.19%.

JNK was unchanged this week, rallying for the first part of the week, and then plunging on Thursday and friday. Friday was particularly bad, with JNK down -0.62%. The big black candle looks pretty ominous.

Something mildly alarming is the breakout of the BAA.AAA ratio this week. It has hit the 1% level, which is a high dating back to mid-2016, and the velocity of the move seems to be picking up. Rising BAA-AAA ratio signals an increasing worry about junky credit (TSLA, shale drillers, etc), and a corresponding bid for the safer stuff like JNJ and AAPL. We saw this on Friday – a rally in TLT, and a large plunge in JNK. If this continues, it is a significant long term credit market risk off signal. What’s more, this series updates with a 1-day delay, so this chart does not include Friday’s move, which based on what we saw with JNK and TLT, was likely quite significant. 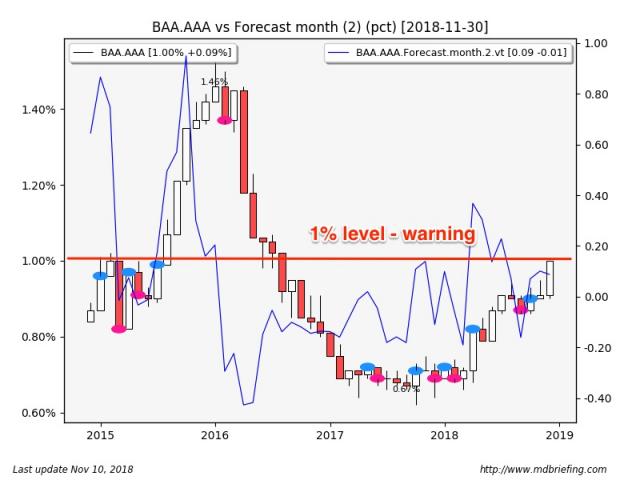 Crude dropped for the 5th straight week, losing -2.89 [-4.59%] to 60.08. Crude has fallen for the last 10 days in a row; this has taken crude’s RSI-7 down to 10. My thought was, “it will bounce any day now.” And then it sells off some more. The EIA report wasn’t helpful at all (crude: +5.8m, gasoline: +1.9m, distillates: -3.5m); the big drop contributed to the decline of prices this week. Crude is in a downtrend in all timeframes. Friday’s long black candle was cautiously optimistic (34% bullish reversal), but it certainly wasn’t conclusive.  The weekly chart – well, it just looks awful.  No reversal on the weekly chart. 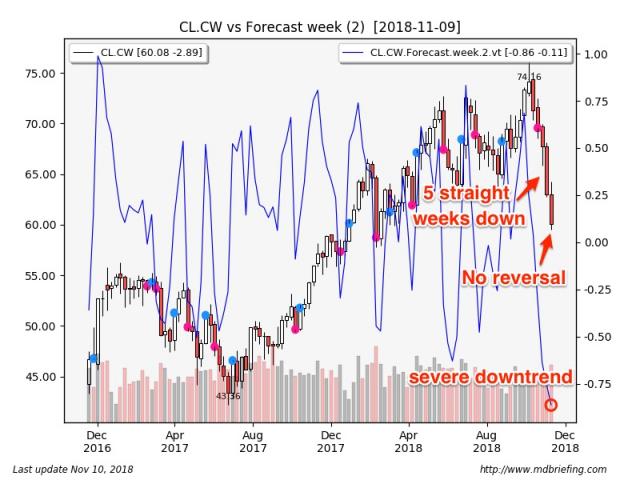 * Bullion Vault gold (https://www.bullionvault.com/gold_market.do#!/orderboard) shows a $5 discount for gold and a 32c premium for silver.

The metals turned sharply lower this week – gold was hammered, with silver and the miners doing even worse. Copper led the pack lower.  Most of the plunge could not be blamed on the buck, which did rally, but not all that strongly. Silver looks set to re-test its 13.96 lows next week. Crude appears to be in free-fall, down $15 in 5 weeks. Is it supply? Worries about recession? Trump taking it easy on Iran? Its hard to know. Junky credit yields have also lurched higher – when this happens alongside a treasury bond rally, it is time to start worrying about the macro situation.

Big bar gold premiums on gold remain low, silver’s premium has increased, while ETF discounts are mixed. There is no shortage of gold at these prices, but there does seem to be a shortage of silver, for certain products.

The COT report is split this week; gold remains relatively bullish, although it is not currently at the highs, while silver has changed more substantially. Silver no longer looks bullish, at least from the standpoint of commercial and managed money short positions. We could actually be nearer an interim high – if we assume a steady rise in short positions by both players.

Judging from momentum alone, the metals probably make new lows next week.  Certainly that’s more likely true of silver, which is just one bad day away from a new low and a probable breakdown.  I think its time to watch from the sidelines until things settle down.  Based on the current premiums I see, if silver does make new lows, it might not be possible to buy physical silver for anywhere near the COMEX price.  In that case, you can always buy PSLV (which is trading at an impressive 5% discount) and then hold until price rebounds, sell, then use the cash to buy whatever silver item you want to hold.  You will have to pay taxes on the gains, but they might be less in aggregate than the premiums you would otherwise have to pay.