Since this Friday marked the last trading day of the month, you get a monthly report this weekend.  I like doing these reports best.

The monthly metals sector map has silver leading gold lower, but the miners are roughly in the middle of the pack; they outperformed silver, with the juniors doing best. In spite of most of the components falling in price this month, all items except copper remain above the 200 MA, and a number remain above both the 9 and 50 MA lines too.

Gold fell -49.90 [-3.28%] to 1470.71. The long black candle was somewhat bullish (36%), but forecaster dropped into a downtrend. Daily forecaster reversed back into an uptrend on Friday – this leaves gold in a downtrend in both weekly and monthly timeframes. Gold/Euros looks much the same.

The Dec 2019 forecast is now looking at a rate increase: 4% chance.

COMEX GC open interest rose +6,014 contracts on Friday, and +17,669 contracts this month. Current open interest for gold: 83% of global annual production. This is a new all time monthly high for gold open interest; this behavior (rising OI) is very unusual to see during a price decline. To me, this pattern strongly suggests official intervention. 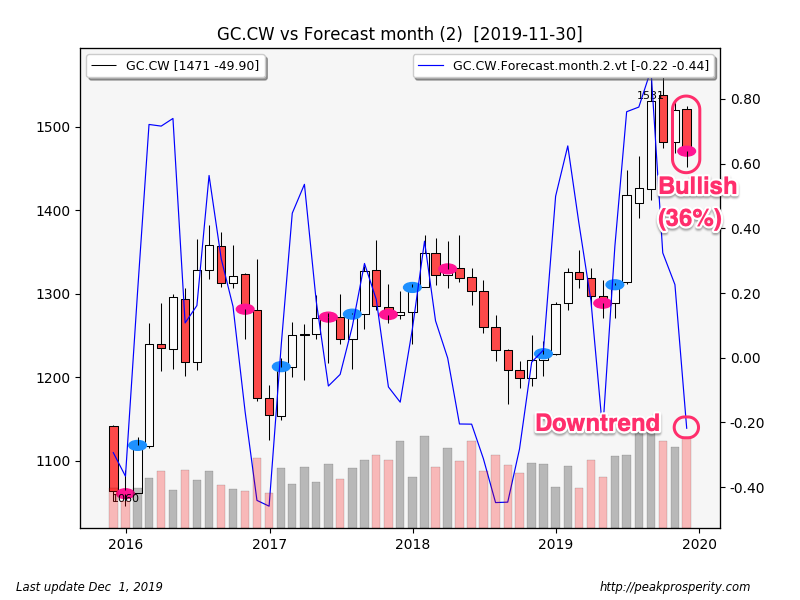 Silver plunged -1.00 [-5.525] to 17.11. All of silver’s losses this month happened during the first week of the month. The long black candle was mildly bullish (33%), and forecaster fell but remains in an uptrend. Silver ended the month in a downtrend in both daily and monthly timeframes.

COMEX SI open interest fell -1,515 on Friday, and -15,969 for the month. Current open interest for silver: 116% of global annual silver production. In contrast to gold, silver’s OI dropped sharply this month as price fell. This is the standard pattern; commercials ring the cash register on their shorts as prices decline. That has been the pattern for decades in both gold and silver. 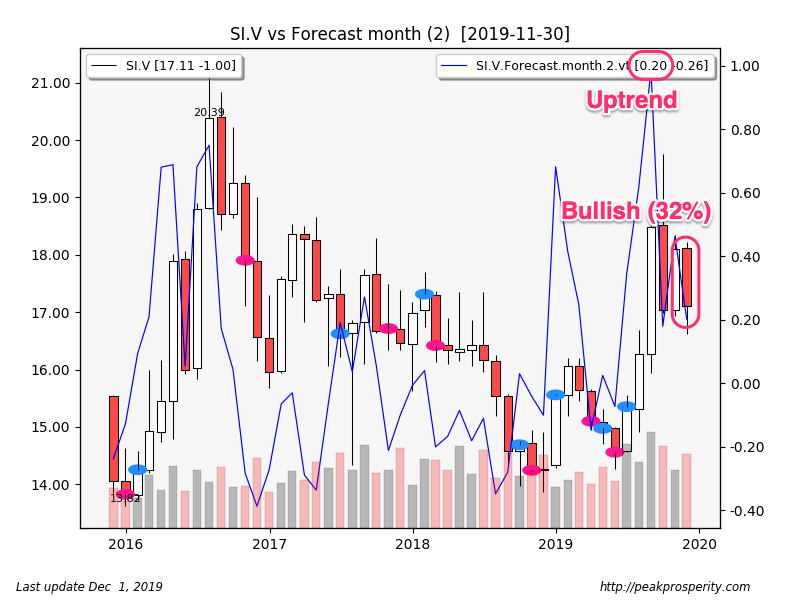 Miners were basically unchanged, down -0.10%. The doji candle was a bullish continuation, and forecaster moved higher into its uptrend. Miners ended the month in an uptrend in all 3 timeframes, and above all 3 moving averages as well. This was a strong performance for the mining shares. 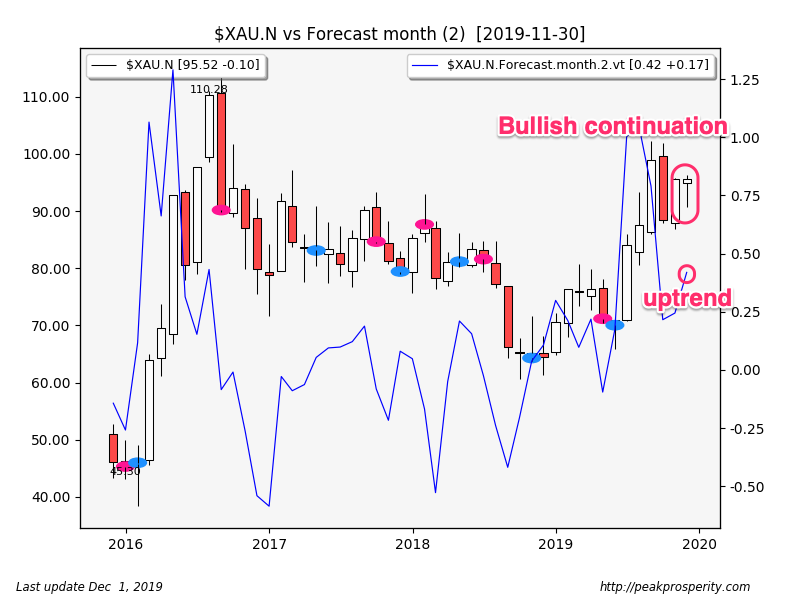 The buck climbed +0.90 [+0.93%] to 97.83. The short white/NR7 candle was unrated, and forecaster jumped higher, and has moved back into an uptrend. The buck is now in an uptrend in the daily and monthly timeframes. 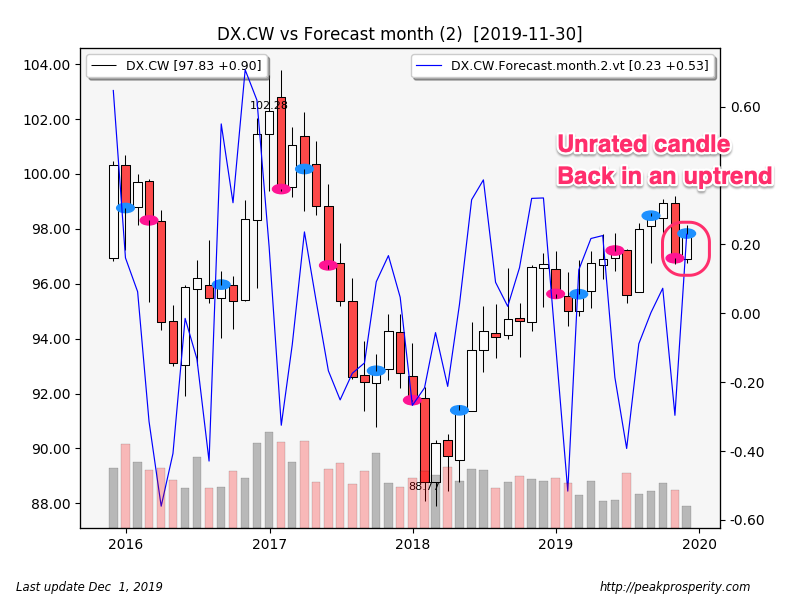 SPX rose +103.42 [+3.40%] to 3140.98. The opening white marubozu was a bullish continuation, and forecaster moved higher into its uptrend. This was a new monthly all time high for SPX. Friday saw a swing high candle print, but it was not particularly bearish (36%). SPX remains in an uptrend in all 3 timeframes. 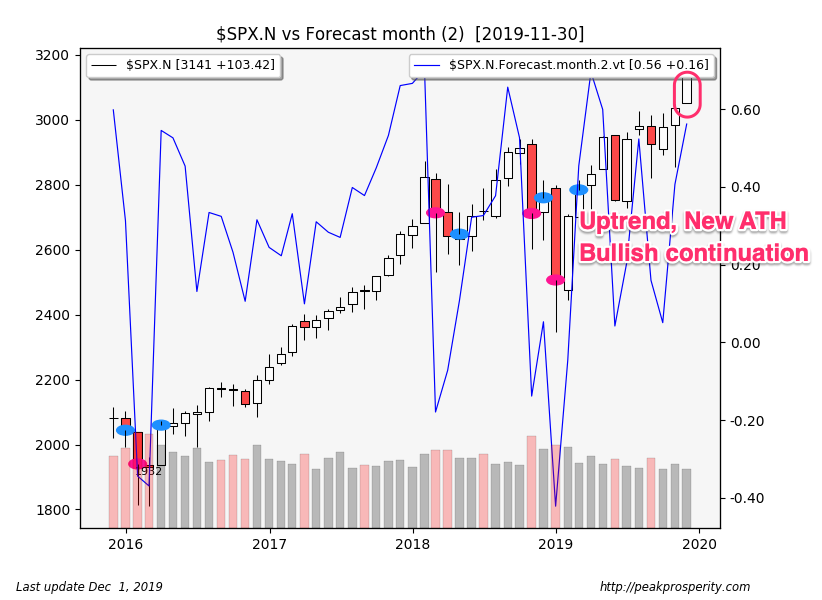 This month, tech and defense were in the lead, while utilities and REITs did worst. This was a bullish sector map.

The US equity market was #1, with Latin America doing worst.

DGS10, the 10 year yield, rose +8 bp to 1.77%. The opening black marubozu was a bullish continuation, and forecaster jumped into an uptrend – for the first time in 12 months. The weekly moved back into a downtrend, however, which leaves DGS10 split: downtrend on the weekly, uptrend on the monthly.  Reminder: DGS10 uptrend = bond market downtrend. 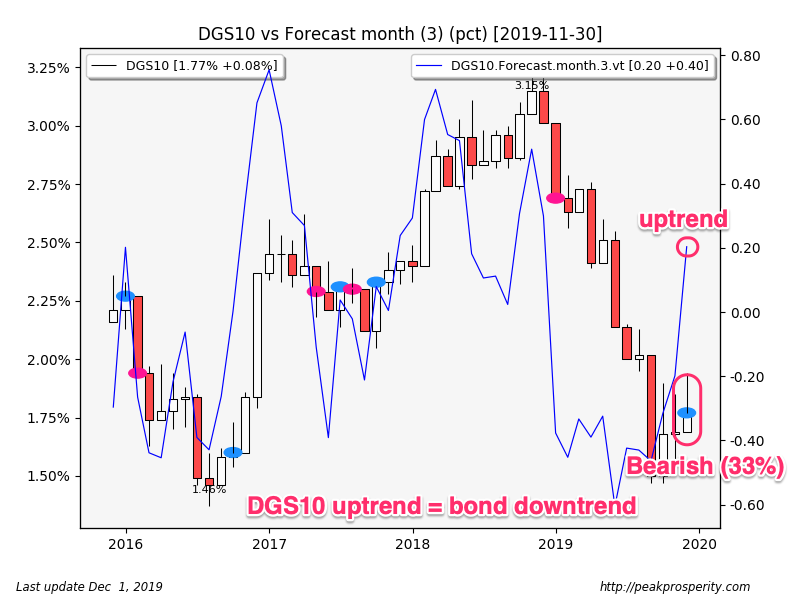 The BAA.AAA differential rose +2 bp to +90 bp. There are still no real worries about debt quality right now, although forecaster is now back into a slight uptrend.

Crude rose +1.18 [+2.18%] to 55.37. Mostly, this month looked like a failed rally; the spinning top candle was mildly bearish (30%), but forecaster moved higher into its uptrend. On Friday, crude was crushed, plunging -2.72, which was enough to drag both daily and weekly forecasters back into a downtrend. While the monthly trend remains pointing higher, Friday’s huge move suggests a change in trend may be ahead.

Driving the market: Saudi Arabia reportedly is tired of overcompensating for other nations’ cheating on their oil production quotas; the market appears concerned this will lead to overproduction. The next OPEC+ summit will occur next week, and if the Saudis decide to abandon their role as compensators-in-chief, we could see a very brisk move lower in oil prices. Is this just a bluff or a real thing? That’s hard to know. Since the US is an “oil exporter” for the first time in 70 years, we theoretically don’t care any longer.

Or – just wait until Warren gets elected and bans fracking. Oil will shoot through $100 faster than you can blink. Any bets she gets campaign contributions from the Saudis and the Russians?  If I were them, I’d shovel money at her as fast as humanly possible.  Too bad she doesn’t have a “Warren Foundation.” 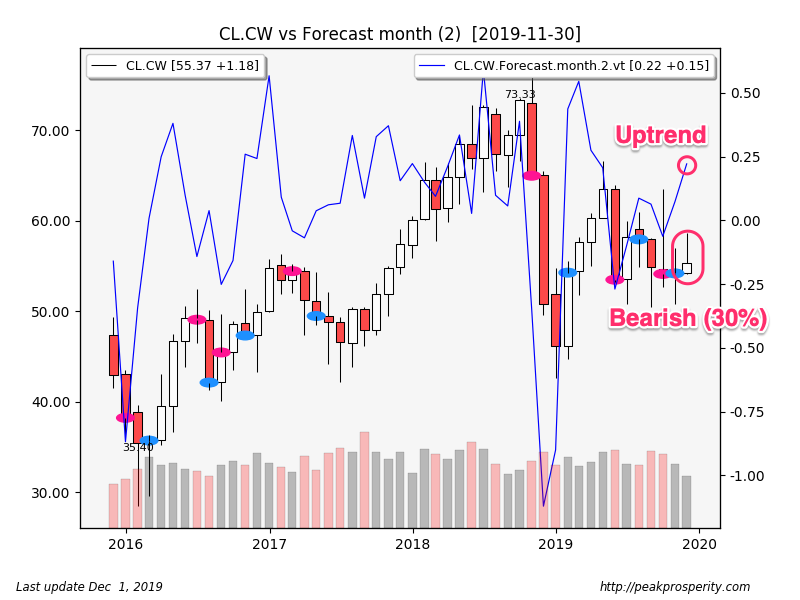 * Premium for physical (via Bullion Vault: https://www.bullionvault.com/gold_market.do#!/orderboard) vs spot gold (loco New York, via Kitco: https://www.kitco.com/charts/livegoldnewyork.html) shows no premium for gold, and a 3 cent premium for silver.

Gold, silver, and bonds all fell this month, while equities rallied to new all-time highs. It was a risk-on month. Was this because of the US-China trade deal, or a torrent of money-printing by the Fed? Certainly the trade deal is no closer to completion than it was a month ago.

The Fed’s Not-QE program did $84 billion this month, a brisk increase. This might account for the strong equity market rally. The Fed is printing truckloads of money [factoid: about 9600 bills can fit in 1 cubic foot; a 53-foot semi trailer holds 3400 cubic feet, so $84 billion = 25 “truckloads” of $100 bills] to paper over “something”, which they are keeping secret from the great unwashed, lest we panic. And they are lying about doing it. Does this make you feel warm and fuzzy?

The US economic indicators continue to show a contraction in manufacturing, producer prices, a flat CPI, and modest expansion in consumer spending, retail sales, employment, and services.

Big bar premiums on gold and silver have declined, and ETF discounts have shrunk. PHYS has even gone into premium. That’s a positive sign.

So what’s the technical environment right now for gold? Well, it was a strong risk on month for equities, there was a reasonably strong dollar rally, and the Fed has said there will be no more rate cuts. That’s all gold-negative.

Then there’s gold’s open interest. The gold OI made a new all time high around mid-month (very odd to see OI increase during a gold price decline – unprecedented, really), but then the OI declined through the end of the month. This suggests two things to me: the recent 3-month gold decline (and gold’s current downtrend) is an artifact of official intervention, and that for whatever reason, the intervention is over, at least for the past 2 weeks.

During all of this – negative gold environment, and official intervention – the miners managed to stay flat even though gold dropped by almost $50. That’s a fantastic performance by the mining shares. In the bad old days (2013-2017) a $50 drop in gold would have given the mining shares a heart attack. Not any longer.

And in the overall financial market, something is still amiss. It is not a small something. Not-QE is continuing – roughly 25 53-foot trailers stuffed full of $100 bill-equivalents are being “printed” per month. What is the Fed covering up with all that money?

Most likely, it is something that – if it broke – would imperil the entire financial system. 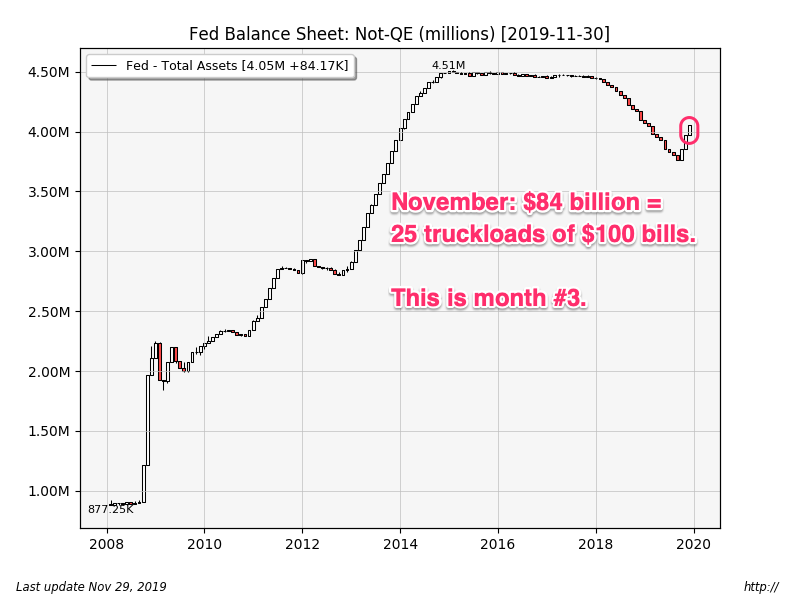 Monthly trends (in order of strength):