The weekly PM sector map shows silver leading gold lower, and the miners leading the metals lower. That’s bearish. All three standard components have dropped below the 9 and 50 MA lines. At the same time, both platinum and copper shot higher this week, and both are above all 3 moving averages. What is this bifurcation about? I don’t know, but the demand for copper – and now, for platinum – is distinctly stronger than for the gold/silver/miners group. I’ll post the sector map after the weekly report so you can see what I’m talking about.

This week, gold fell -18.89 [-1.00%] to 1875.55 on moderate volume. The spinning top candle was unrated, forecaster climbed, but remains in a downtrend. Gold is in a downtrend in all three timeframes.

Gold/euros dropped -20.10 [-1.25%] to 1582.10 on moderate volume. The spinning top candle was a bearish continuation, forecaster dropped, falling into a downtrend. Gold/euros is in a downtrend in all three timeframes.

Not all that much happened this week; looking at the chart, gold seems to be bouncing around right at support. There were hints of a bounce on Thursday, but Friday failed to confirm. Gold remains below both 9 and 50 MA lines; the 9 MA seems to be acting as resistance right now. Momentum is pointing lower for gold – a drop through support could lead to a big spike down. 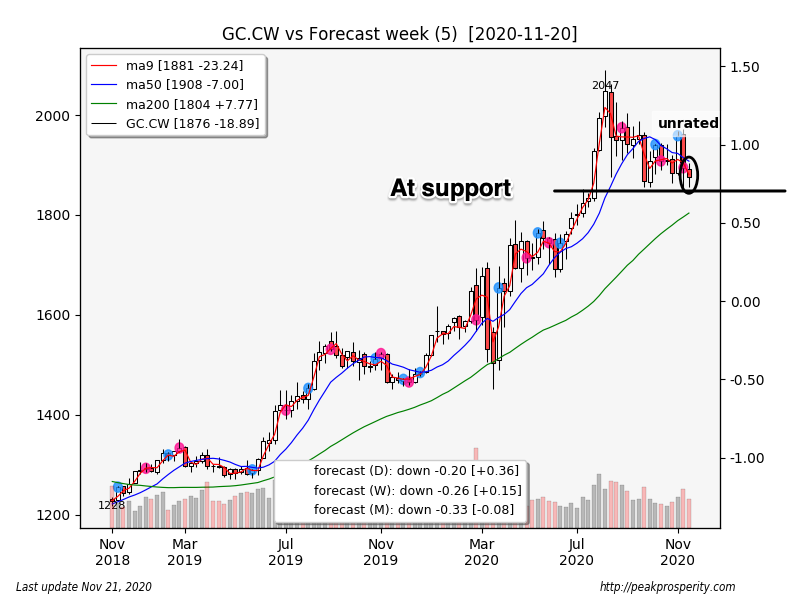 Silver fell -0.53 [-2.13%] to 24.34 on moderate volume. The spinning top candle was unrated, forecaster dropped, moving deeper into its downtrend. Silver is in a downtrend in both the daily and weekly timeframes.

Silver’s chart looks stronger than gold overall, even though silver fell harder this week. Thursday’s possible reversal was not confirmed on Friday. Instead, silver had a failed rally on Friday, seemingly running into resistance at the 9 and 50 MA lines. Silver is a mass of conflicting signals right now; it is hard to know where it goes next. 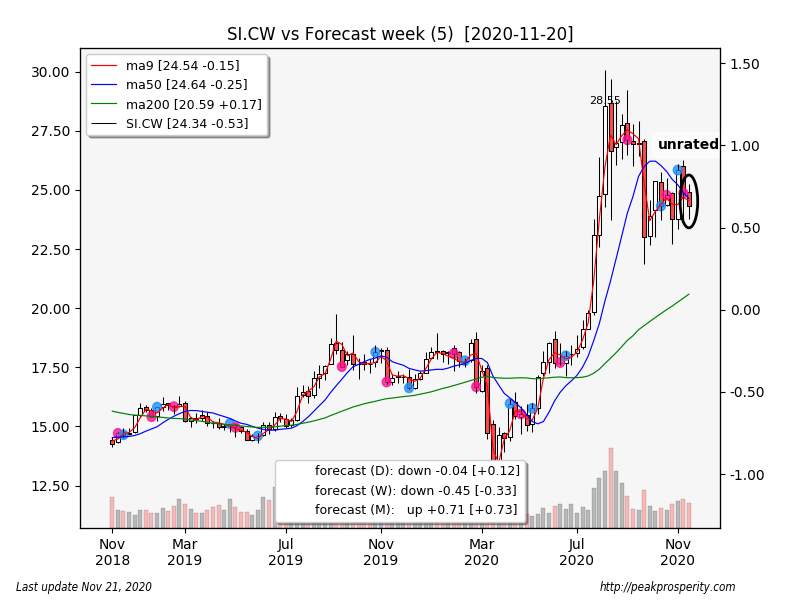 The miners looked weak, making a new 2-month low on Thursday. Friday’s bounce was a swing low (55% bullish reversal), but it didn’t look all that strong to me. There was a bunch of buying in the first 15 minutes, and then the miners lost most of its gains fairly soon thereafter. Medium-term trend continues to be down for the miners. 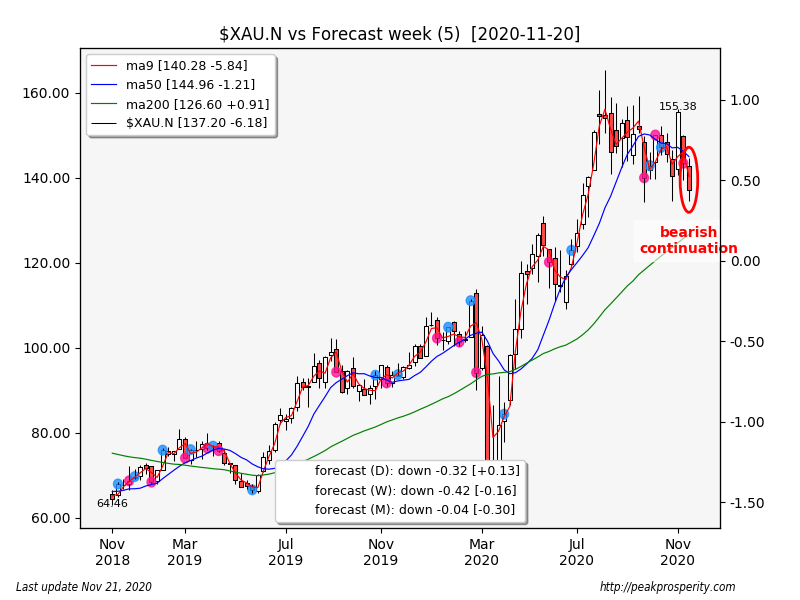 Copper shot up +0.11 [+3.46%] to 3.29 on moderately heavy volume. The white marubozu candle was a bullish continuation, forecaster dropped, but remains in an uptrend. Copper is in an uptrend in all three timeframes.

Most of the gains for copper came on Friday, when copper broke out to a new 3-year high.

Both copper and platinum look very strong. Copper has consistently rallied since the lows in March, but platinum’s strength is a new thing. The gold/platinum ratio is 1.96 – down from the all time high of 2.50 in March, but still close to an all time high on a yearly basis. 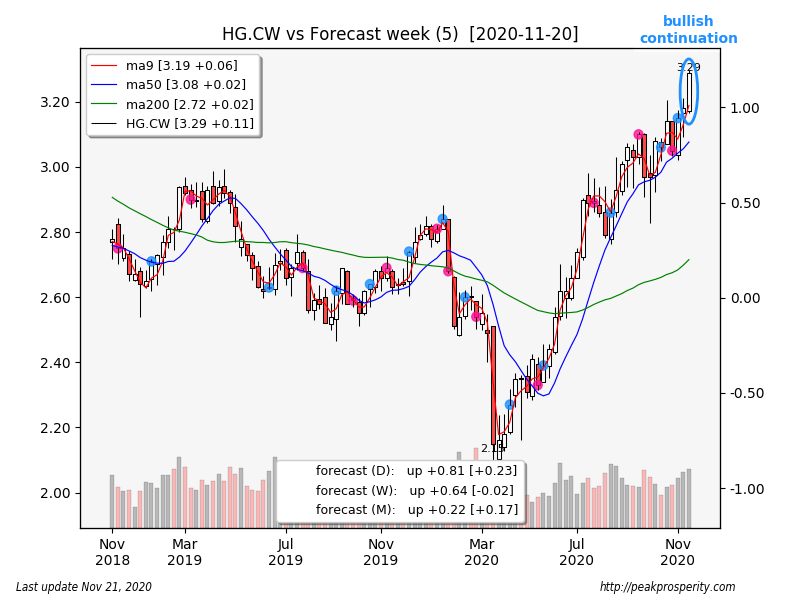 The buck dropped -0.37 [-0.40%] to 92.35 on moderately light volume. The nr7 candle was unrated, forecaster climbed, but remains in a downtrend. The buck is in a downtrend in both the daily and weekly timeframes.

The buck is also bouncing around support. It appeared to run into resistance at the 9 MA this week also. The move lower in the buck didn’t help gold at all. 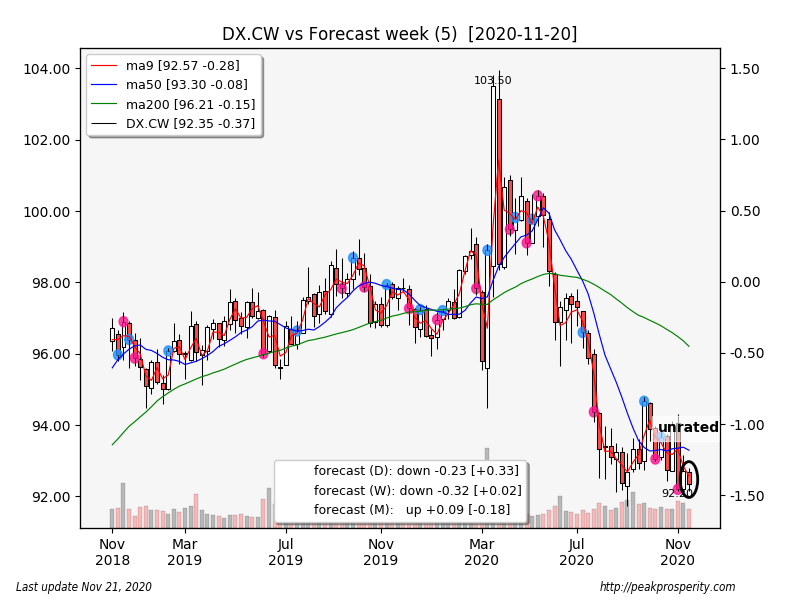 Crude jumped higher, up +2.14 [+5.30%] to 42.48 on moderately light volume. The short white candle was unrated, forecaster climbed, moving higher into its uptrend. Crude is in an uptrend in the weekly and monthly timeframes.

Crude broke out on Friday to a new 3-month closing high. This week, crude appears to have found support on its 9 MA, which looks bullish. Crude is looking pretty strong right now. 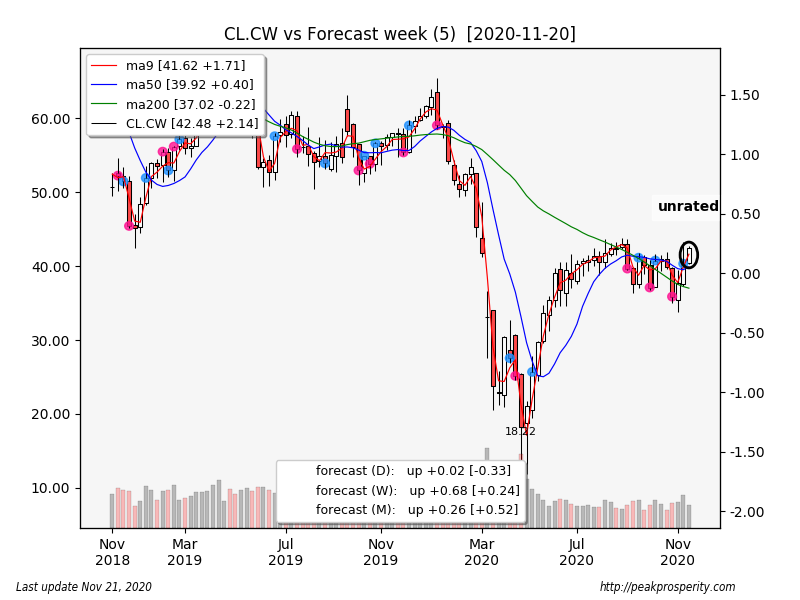 The drop in SPX was a bit odd this week; energy screamed higher (due to the crude rally), materials rallied (copper, probably), while – utilities sold off? It was a curious pattern, and not a bearish one. SPX still appears to be in a longer term uptrend. 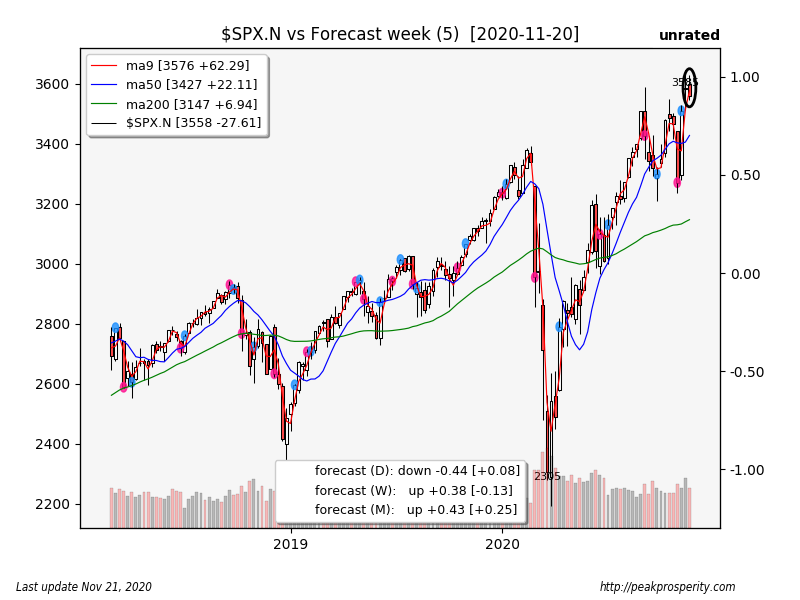 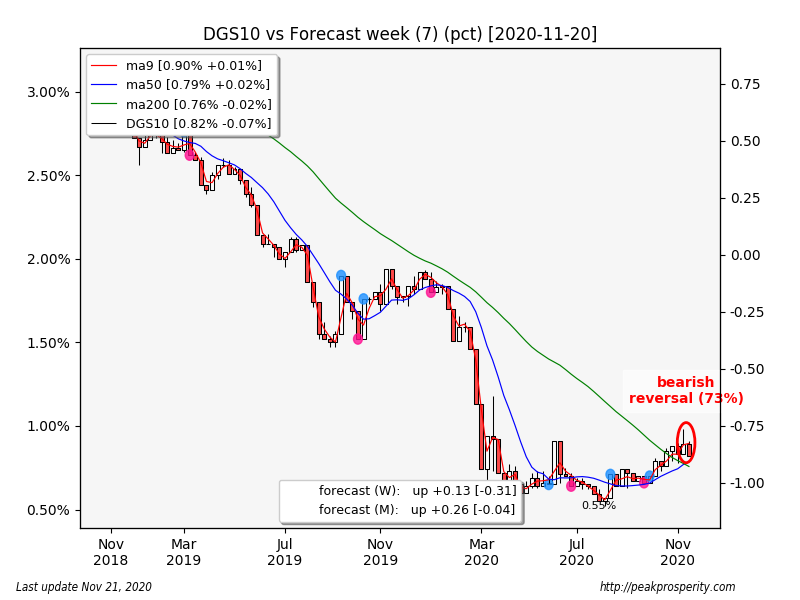 JNK climbed +0.62%. The spinning top candle was unrated, forecaster dropped, but remains in an uptrend. JNK is in an uptrend in the daily and weekly timeframes.

Crappy debt moved higher – almost all of the move happened Monday due to the vaccine trial news. It doesn’t feel all
that bullish to me. 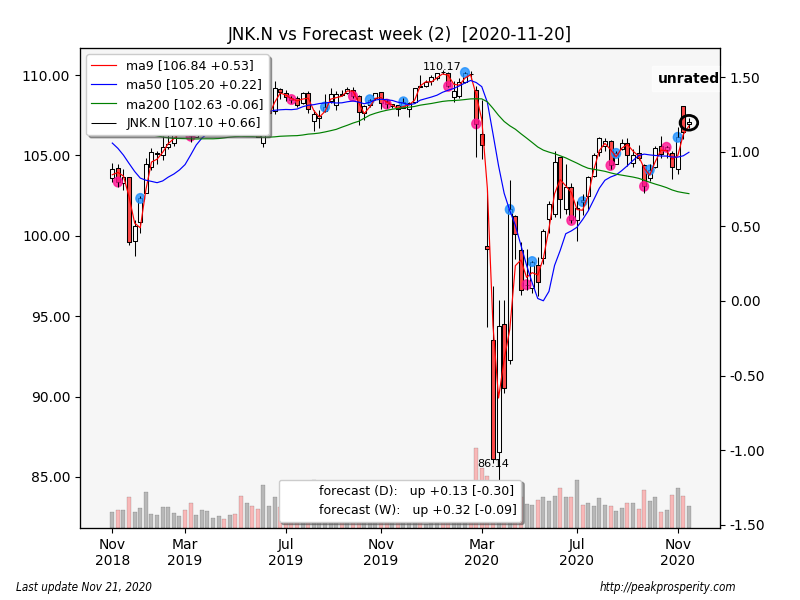 The GLD ETF tonnage on hand dropped -14.15 tons, with 1220 tons remaining in inventory.

Industrial Production: headline +1.07% m/m, manufacturing: +1.03% m/m. INDPRO was down maybe 20% peak to trough; recovery has slowed significantly, but it does continue to improve.

Gold, silver, and the miners all moved lower this week, led by the mining shares, which ended up making a 2-month low by a few pennies. Gold is (roughly) right at support, while silver looks the strongest of the three.

Platinum has decided to start going nuts – this week’s 6% move (at a time when the rest of the complex is selling off) is very odd behavior.

Risk assets were mixed; equities initially rallied on the vaccine trial news, but the gains evaporated by end of week. Crappy debt did a bit better, while both copper and crude broke sharply higher. Copper ended the week at a 3 year high, while crude closed at a 3-month closing high.

So this week we see copper, crude, and platinum all scream higher, while gold, silver, and equities all move lower. It feels like the “real industrial items” are catching a strong bid. For whatever that’s worth. Is this buying pressure coming from China? It kind of feels that way to me.

Bonds are also moving higher, but – I suspect – that’s due to $30 billion in new printing by the Fed this week.

My sense right now is that “the market” doesn’t know who will be in the Oval in 2021. Big Money isn’t swayed by the narrative control effort by MSM. Real dollars are on the line; they have to ignore propaganda efforts and instead focus on whatever might actually happen. These guys chart things for a living, they know how to read the numbers, they know statistics, and what happened on election night just doesn’t happen in real life. If they were the jury, I suspect they’d come back with “guilty” within about 30 minutes.

For chart-readers and numbers people, the data is the smoking gun. So they know the fraud happened. What the don’t know is, how it will play out. They just aren’t sure. So prices just edge sideways, waiting for the outcome to become more apparent.

I did get some clarity on something recently. The BLM-Antifa summertime violence seemed pointless to me. But now it appears that it was just “setting the stage” for the fraud discovery event we are going through right now. Does anyone doubt that BLM-Antifa will come and assault anyone – including families, women, children – of any Trump supporters during the election fraud challenge phase? The “anti” fascists are basically executing the Nazi playbook for the benefit of the Biden campaign/Great Reset folks.

The Bad Orange Man appears to be setting the stage for one of two outcomes. #1: his team proves the rampant election fraud that happened in the swing states, with the court remedy being non-certification by enough counties to throw the election into the House, where he may well prevail. #2: the effort fails, and so he’s simultaneously setting the stage for his Grover Cleveland 2024 comeback tour.

Which will it be? As time passes, and as I see more evidence, I’m seeing the chances of Trump remaining in office increase. I’m really not sure what that means for prices. I’ll be watching to see how the various reveals, likely appearing over the next few weeks, affect prices in the interim, so maybe we can get more of a clue.

Platinum & Copper diverge from gold/silver/miners in a big way.

You can also see (from the 52w change column) that platinum has a whole lot of catching up to do.

Looks like higher prices ahead.  All the timeframes agree.  Remember I’m a day behind – this is yesterday’s view. 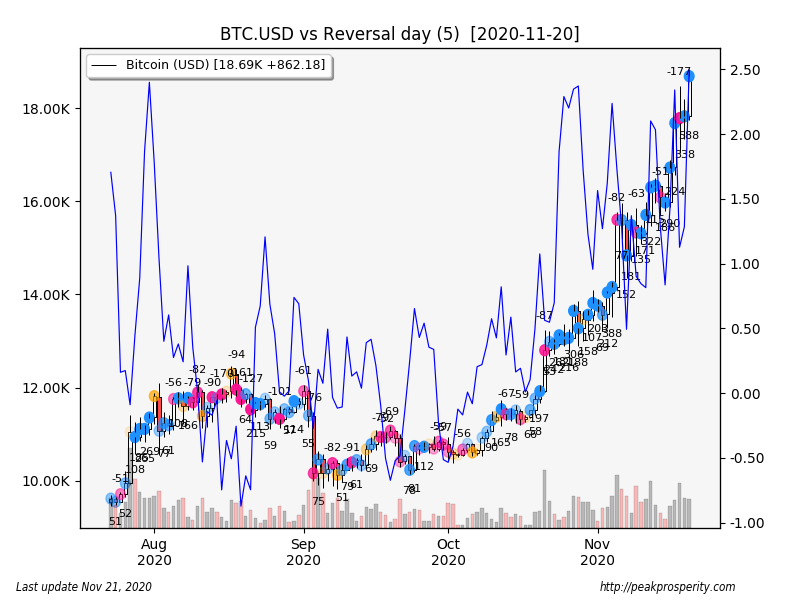 I think it’s possible that bitcoin tests it’s old high tonight (Saturday, the 21st). I’ve noticed that many big moves, up or down, occur on Saturday nights.

I’ll be drinking a beer or two and watching. Cheers.

As the number of wallets increases and the available supply decreases, pushing prices upward.

This chart indicates that Bitcoin is now being held, not traded. 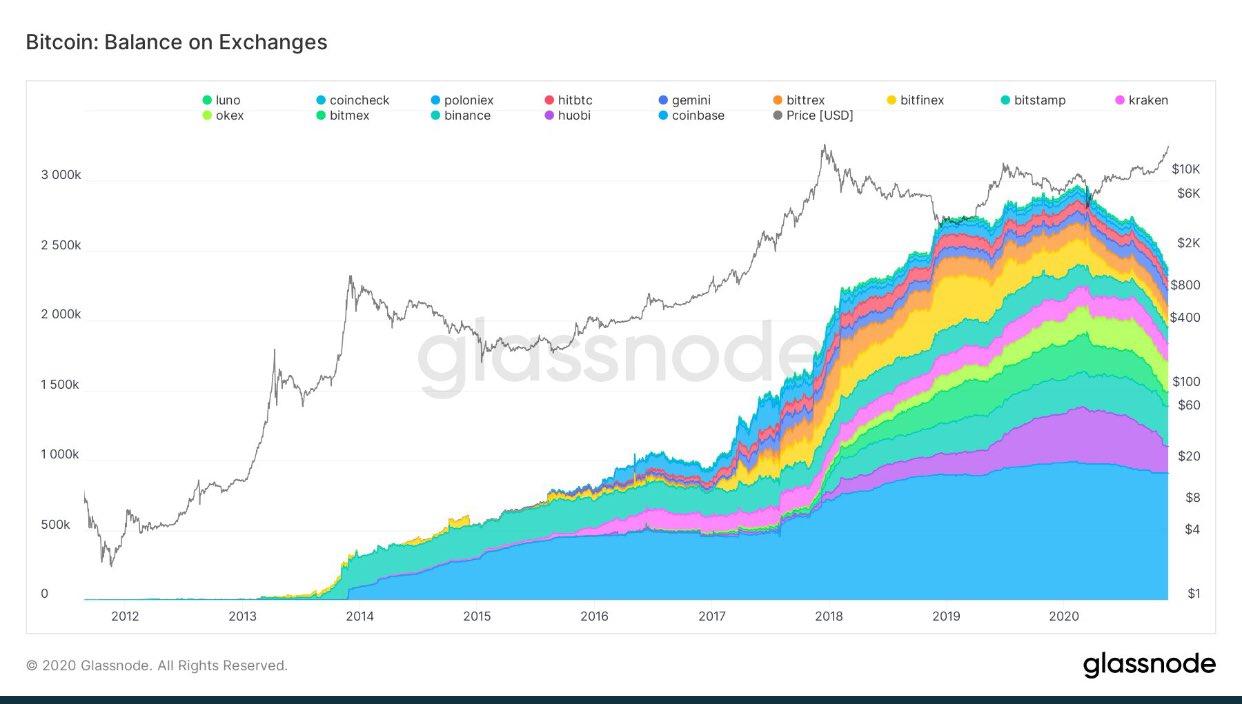 Ok I’ll go add “# of addresses” to my price model and … hmm.  Interesting.  Looks like transactions / addresses does help.  At least with the trend detector anyway.

I haven’t played around with the secondary bitcoin metrics in a while.

Anything else like this  you come across – please let me know!

When stuff goes vertical – at some point, there will be an exciting retracement.  My experience. 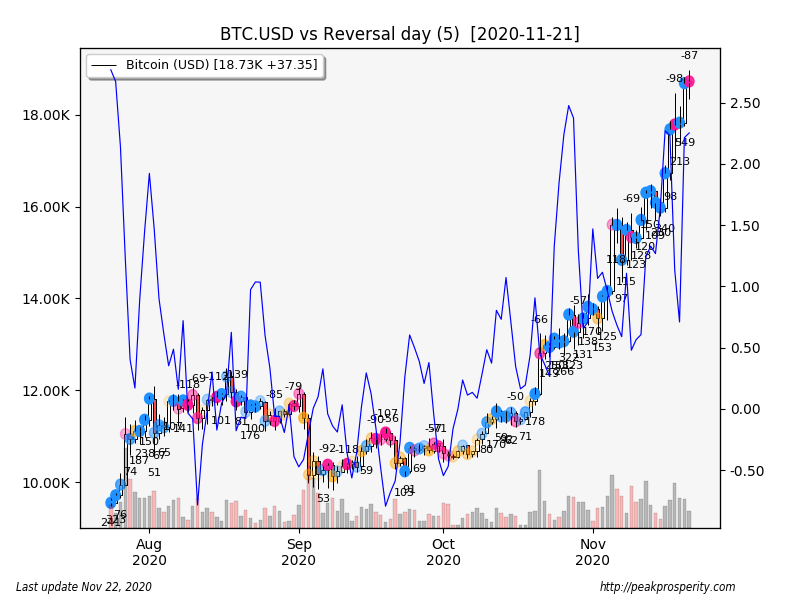 No real drama on Sat. night. It figures.

It looks like people might be selling at 18K and moving into ETH and Litecoin. I joined them. Both of those coins look to be pretty good bargains when priced in bitcoin, but they had significant moves over the last week.

Game over for Trump.  Powell has been tossed and if they don’t have what she said she had, then it’s over.

The exciting action at weekly RSI-7=93 continues. The 5-day forecast looks mildly bearish; it still thinks a 5-day top might be in.  Some of the other timeframes don’t agree – they still see higher prices ahead.

The fact I’m doing bitcoin updates might also be suggestive of a top too.  🙂 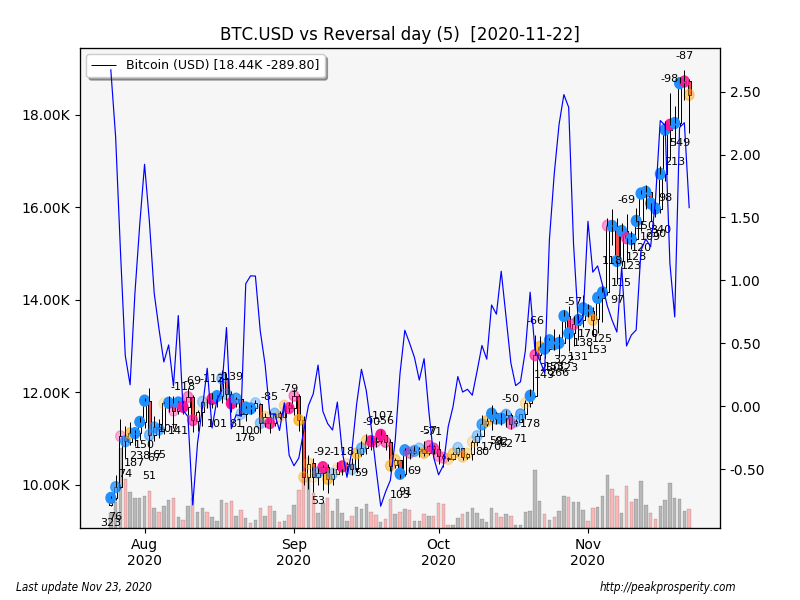